As recent as this Sunday, a report by Asharq Al-Awsat, an Arabic international newspaper headquartered in London, indicated how Iran looks to Bitcoin, the largest cryptocurrency by market capitalization, as a way of evading the impact of U.S. sanctions on its country.

The last two years have shown the U.S. economic sanctions to be effective in Iran, shrinking the Iranian economy by 10-20 percent. For Bitcoin, the policy direction indicates a worldwide crackdown on the anonymity of the cryptocurrency that is primarily driven by both Iran and Venezuela in evading the harsh impact of U.S. sanctions. 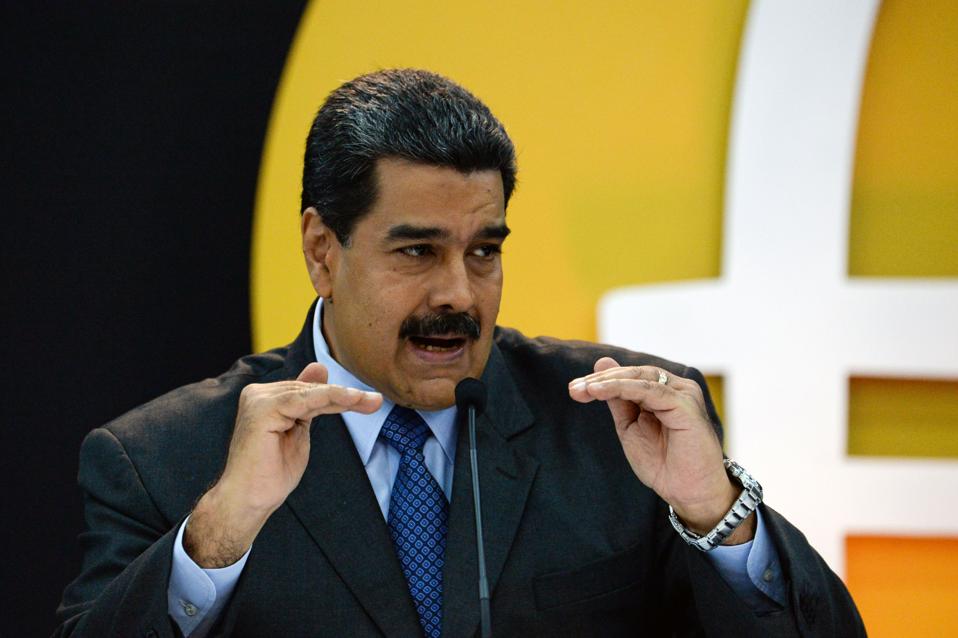 Venezuela’s President Nicolas Maduro delivers a speach during a press conference to launch to the … [+] market a new oil-backed cryptocurrency called “Petro”, at the Miraflores Presidential Palace in Caracas, on February 20, 2018. Venezuela formally launched its new oil-backed cryptocurrency on Tuesday in an unconventional bid to haul itself out of a deepening economic crisis. The leftist Caracas government put 38.4 million units of the world’s first state-backed digital currency, the Petro, on private pre-sale from the early hours. A total of 100 million Petros will go on sale, with an initial value set at $60, based on the price of a barrel of Venezuelan crude in mid-January. / AFP PHOTO / FEDERICO PARRA (Photo credit should read FEDERICO PARRA/AFP via Getty Images)

Indeed, Iran is only the latest in a string of countries who seek to either use cryptocurrency for trade with other countries, a desire to increase its cryptocurrency mining operations, or exploration of a digitally native currency to a blockchain that is part of a Central Bank Digital Currency.

China has been the lead in looking to be the first major superpower to launch a digital currency. Information has surfaced over how the ‘Belt & Road Initiative’ may have a blockchain component with Ethereum that would allow China to trade with other BRI countries such as Iran and Russia using digital assets – which essentially circumvents the entire U.S. global reserve currency model.

North Korea held a conference on Blockchain and Cryptocurrencies last year, for which notably Mr. Virgil Griffith of the Ethereum Foundation flew to attend, even though the State Department denied his application to travel there. The U.S. government is concerned in seeing the trend of these countries look to gain ground over the U.S. through cryptocurrencies. Indeed and as previously reported, Mr. Griffith was arrested by the U.S. Attorney’s Office and faces trial for his trip that resulted in a ‘technology transfer’ of information on cryptocurrency and blockchain, where it is believed his expertise empowered North Korea to use the technology to further its cryptocurrency operations and thus fund its nuclear weapons program that could directly threaten the continental United States.

A combination of the brightest economic experts, foreign policy experts and technological experts on crypto, is needed – and needed fast – for the U.S. to determine a path forward in a world where cryptocurrencies will not be subsiding anytime soon.

4 Tips For Building A Devoted And Engaged Audience Online

Bitcoin Bros Are Directing Their Powerful Computers Toward...