Home Finance Two Experts: 4 Risks That Boeing Stock Has Not Bottomed Out
Finance

Two Experts: 4 Risks That Boeing Stock Has Not Bottomed Out 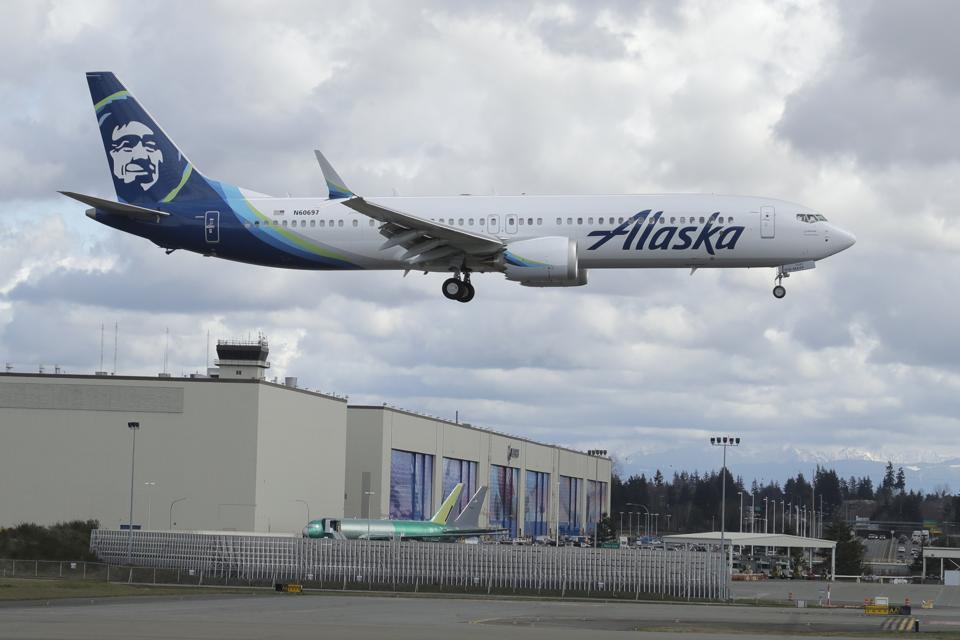 An Alaska Airlines Boeing 737-9 Max flies over Boeing’s manufacturing facility in Everett, Wash., … [+] Monday, March 23, 2020, north of Seattle. All 737 Max planes remain grounded after two deadly crashes, but test and positioning flights continue to be made. Boeing announced Monday that it will be suspending operations and production at its Seattle area facilities due to the spread of the new coronavirus. (AP Photo/Ted S. Warren)

Boeing shares are on the rise. Does that mean you just missed a chance to buy the stock at a discount?

Experts I interviewed did not want to touch that question with a ten foot pole. But they were kind enough to highlight four compelling reasons leading me to conclude that now is not a time to load up on Boeing stock. (I have no financial interest in the securities mentioned in this post).

Boeing stock has soared like a rocket this week. On March 25 its stock popped at its peak nearly 32% — leading the Dow Jones Industrial Average in its rise and enjoying its best day in 46 years, according to CNBC. Although, Boeing had lost 48% of its value in 2020 at its peak on March 25 trade, its shares had recovered a whopping 74% during the preceding week.

Boeing said in January that it expects the 737 MAX — which was grounded in March 2019 after two crashes took the lives of 346 people — to get an FAA sign-off to fly again by midyear, according to CNBC, which reported that Boeing estimated that its costs for the debacle would exceed $18 billion.

This week has been a mixed bag of news for Boeing. On March 23, the company announced plans to suspend production in its Seattle area facilities to slow the spread of the new coronavirus.

The good news for Boeing is that three anonymous sources told the Washington Post that the $2 trillion rescue package — since passed by the Senate — includes money for Boeing in the form of $17 billion in loans and loan guarantees.

That’s a start. In a March 17 statement Boeing said that the aerospace manufacturing industry — representing 2.5 million jobs and 17,000 suppliers — needs at “least $60 billion” worth of financial support, according to the Post.

I see four compelling uncertainties about Boeing. Read on for expert analysis of the risks which convince me that it would be wise to hold off on buying Boeing stock.

Does Boeing have enough cash to make it through the COVID-19 crunch?

Two analysts told me that the strength of Boeing’s liquidity position depends on how long the COVID-19 crunch lasts. One analyst thinks Boeing will be fine if the current economic standstill ends in a couple of quarters. Another says that Boeing can survive for over a year — but it will have to sacrifice most of the jobs of its employees — and Boeing’s suppliers will likely do the same.

As told me on March 25, “Under an optimistic scenario of a few months, it’s not a problem. There is enough liquidity. The middle scenario of a couple of quarters, they could get through. The worst case of nine to 12 months — assuming a second wave of infections — it would be really bad. Boeing would need liquidity help.”

Richard Aboulafia, Teal Group Vice President, thinks that the non-optimistic scenario could cost many workers at Boeing and its suppliers their jobs.

On March 25, he said Boeing has “enough cash to make it through the crunch, but if it lasts longer than another month or two, and it will, then they will need to lay off much of their workforce, stop buying from their suppliers…Then [the suppliers] layoff their workers, and it all becomes part of an enormous economic catastrophe. So, if Boeing hunkers down like this and stops building jetliners, they’re fine for a year or two, and perhaps longer.”

Will Airlines Take Delivery Of 737 MAXs They Ordered?

Anonymous sources told Reuters that Boeing expects to resume 737 MAX production in May. The two analysts do not expect airlines to take prompt delivery of the aircraft they ordered.

Aboulafia says that airlines will delay taking the aircraft. Resumption of 737 MAX manufacturing “needs to happen, just to get the machines moving again. The planes won’t be needed until 2021 at the earliest, but preserving the production facilities and tooling is the objective. [Airlines will not take immediate delivery of newly made 737 MAXs]. But the bigger question is how to absorb the over 700 MAXs that have already been built but are grounded. This will take a lot longer now,” he said.

Epstein thinks that the answer depends on how long it takes for consumers to fly again — which might not happen until a COVID-19 vaccine is widely available. “The question I am hearing people ask is when the public will be comfortable flying again. The answer is more nebulous than it was after 9/11. A COVID-19 vaccine would be really good for the travel industry,” he said.

Boeing wants to avoid adding to inventory. As CFO Greg Smith told Reuters, “It’ll be a very slow, methodical, systematic approach to warming the line up, and getting crews back in place. Priority number one is getting customers’ fleets back up. [A production ramp up will be paired with clearing the MAX backlog because] we don’t want to add to inventory.”

Both analysts said that resuming production of the MAX would burn Boeing’s cash. “Building these jets at 20 per month will cost around $800 million per month or more, with no cash from customers until [Return to Service] RTS,” said Aboulafia.

It will take a long time before airlines begin paying for these newly produced aircraft because global certification of the MAX will be delayed by social distancing. “Before the MAX can fly again it must by FAA certified. Boeing is saying midyear. Social distancing on the coast — in Seattle will delay it some. And it will be hard to get international certification since [the global regulators have] got to get to Seattle,” said Epstein.

In addition, airlines will use their bargaining power to delay taking delivery. “Every airline is cutting capacity — who wants to take delivery? A year after the order with no delivery triggers the material adverse change clause. They can walk away and get their deposit back. But most airlines think of themselves as going concerns so they have a free option to defer taking delivery,” Epstein explained.

How Much Cash Flow Runway Will Boeing Get From The Pending Rescue Package?

There remains uncertainty around how much money the rescue package that passed the Senate will ultimately deliver to Boeing — but it might only cover three months’ worth of production. “The current rumor is $17 billion. We don’t know if additional funds will be provided to Boeing’s supply chain, which require about 75% of the funding, or if that $17 billion is meant to just cover production for around three months of a collapsed jetliner market,” said Aboulafia.

Sadly for readers, the two experts would not answer directly the question of whether Boeing stock has bottomed out. Aboulafia said, “Wouldn’t touch that topic!” After a long pause, Epstein said, “Answering that would be speculative.”

While they would not touch this question with a ten foot pole, I think their answers offer four compelling reason to steer clear of Boeing’s stock.

From Helmets To Face Masks: One Social Entrepreneur’s Plan To Fight Coronavirus And Save Jobs

Need Social Security Help? What To Do Now

A Bond Low Is Due In Late January