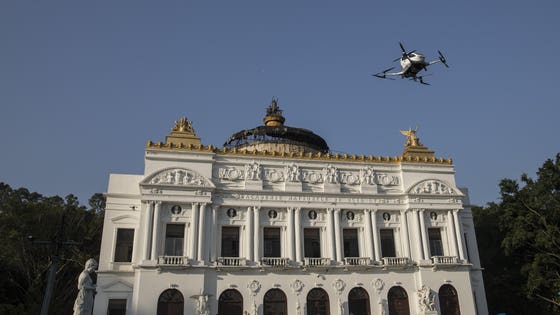 Action continues for Chinese tech IPOs in the U.S., despite ongoing frictions between the U.S. and China in the race for technology power.

China drone maker EHang — the one that does two-seater passenger flying drones — lifted off on Nasdaq this past week and raised $43 million. That’s less than half its targeted $100 million in a tough climate given the scrutiny of Chinese companies in the U.S.

A second Chinese company, Ucommune — a rival to WeWork in China — is attempting an IPO in New York, seeking to raise $100 million. Two big banks have reportedly dropped out of the IPO over concerns about too-high valuation, which also tripped up WeWork.

The end of the year is always a busy time for IPOs and this year is no exception for China, which could see as many as 35 Chinese companies list in New York in 2019, about the same as 2018, before the US-China tech cold war took hold.

Based in Guangzhou, EHang first captured the public’s imagination at CES in 2016 when it introduced a passenger drone prototype. Now, EHang is close to commercial production. It will supposedly have its first tryout as a sightseeing vehicle for

A major backer of EHang is venture investor Jenny Lee, a managing partner at GGV Capital. The promise of the vehicle, as GGV words it, is more safe, autonomous, and eco-friendly air mobility made accessible to everyone!

Derrick Xiong, a co-founder of EHang, got funding for his initial mobile app-controlled innovation, the Ghost Drone, from a crowd-funding campaign that raised $600,000 on Indiegogo in 2014. GGV Capital followed with $10 million the year after. It soon went on to raise $42 million from GP Capital and returning investors ZhenFund, GGV Capital and others.

Last year, EHang filed for bankrupty protection in a technical filing to close the U.S. office and focus on operations in China.

The founder of Ucommune, real estate veteran Mao Daqing, is known as the king of China co-working. Starting from 2015, and backed by $650 million in funding from majors Sequoia Capital China, ZhenFund, Matrix Partners China and Sinovation Ventures, Ucommune has opened more than 120 locations in China. Ucommune claims to be the largest co-working provider in China.

It’s also tech savvy, lime many other tech titans today in China. Entry to its facility is by facial recognition technology.

My latest book, Tech Titans of China, covers the strategies of both EHang and Ucommune, and puts them in context of what else is happening in China’s evolving technology market.