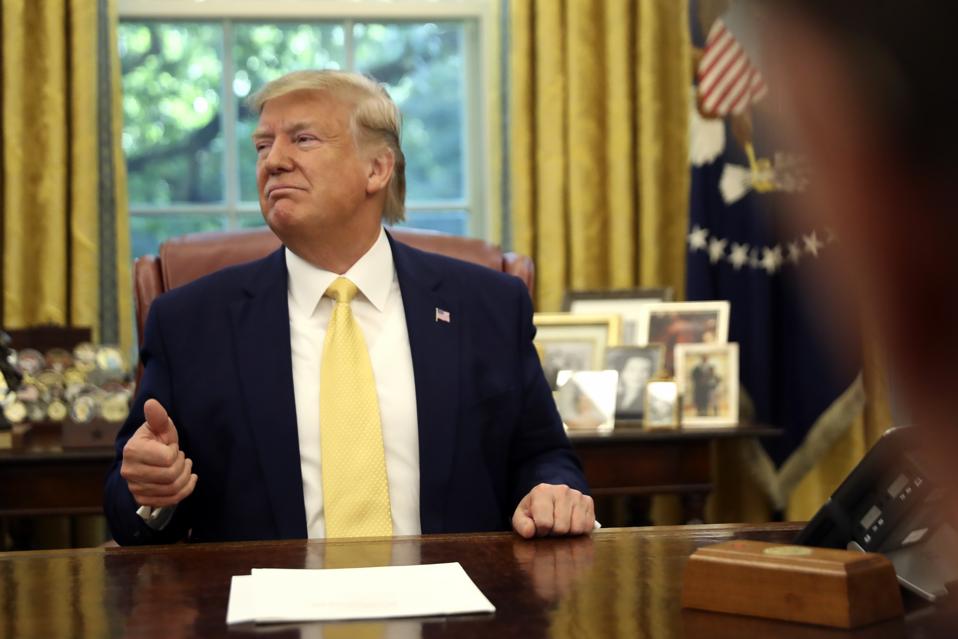 President Trump’s 12/3 announcement that the trade dispute with China may persist through the 2020 U.S. presidential election aligns directly with our forecast — made in July 2019 — that little meaningful progress will be made toward resolving the broader trade dispute prior to the U.S. elections. Per the figure below, our current forecast of Chinese Investment/Trade Policy Risk (solid line) is actually higher than our forecast from 11 October (dashed line) when the U.S. announced that “Phase I” deal negotiations were underway, and remains on an upward trajectory. Respectively, these trends imply that (1) risk surrounding the trade dispute has in fact worsened since the Phase I deal negotiations were announced, suggesting a delay is increasingly likely; and (2) bilateral trade relations will continue to deteriorate beyond the 12/15 U.S. tariff deadline. With respect to the tariff deadline, our data implies that the 12/15 tariffs are now more likely to enter into force than was the case in October (a counter-consensus take which goes against the recent period of relative media optimism surrounding the dispute), and that any Phase I trade deal that is actually realized will not substantially improve bilateral trade relations prior to the U.S. elections.

See here for our initial forecast linking the timing of trade dispute’s resolution to the U.S. elections, and here for our most recent take (n.b. Links are only accessible to clients). 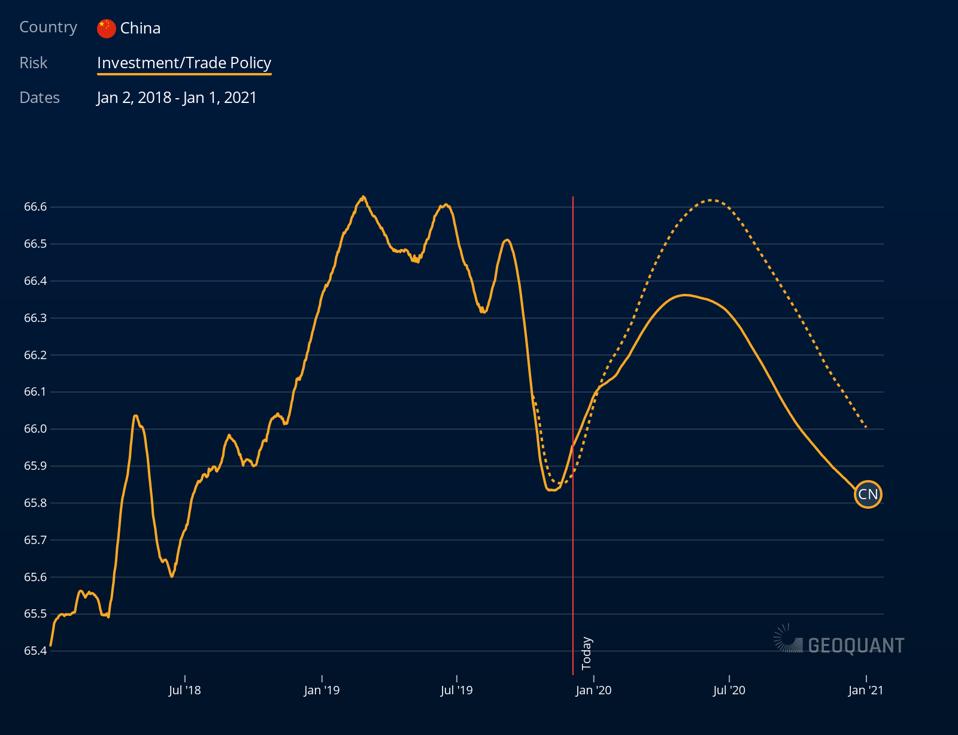 Government Risk is rising, driven by intra-party battles within the coalition’s partners that may well result in a minority government or even an early election in 2020. The immediate forecast is for risk to fall over the holidays but resume its rise as politics heats up in 2020. The Social Democratic Party (SPD) just selected new leadership that opposes the compromises their more moderate co-partisans made to maintain a coalition with the conservative Christian Democratic Union (CDU). In effect, the SPD left has taken control from the moderates and will look first to push the coalition toward a more expansionary policy agenda focused on public spending and higher wages. If the CDU rejects those appeals, as appears likely, it will look for an opportunity to leave the coalition, leaving the CDU — which is struggling with it’s own intra-party struggles — atop a minority government. 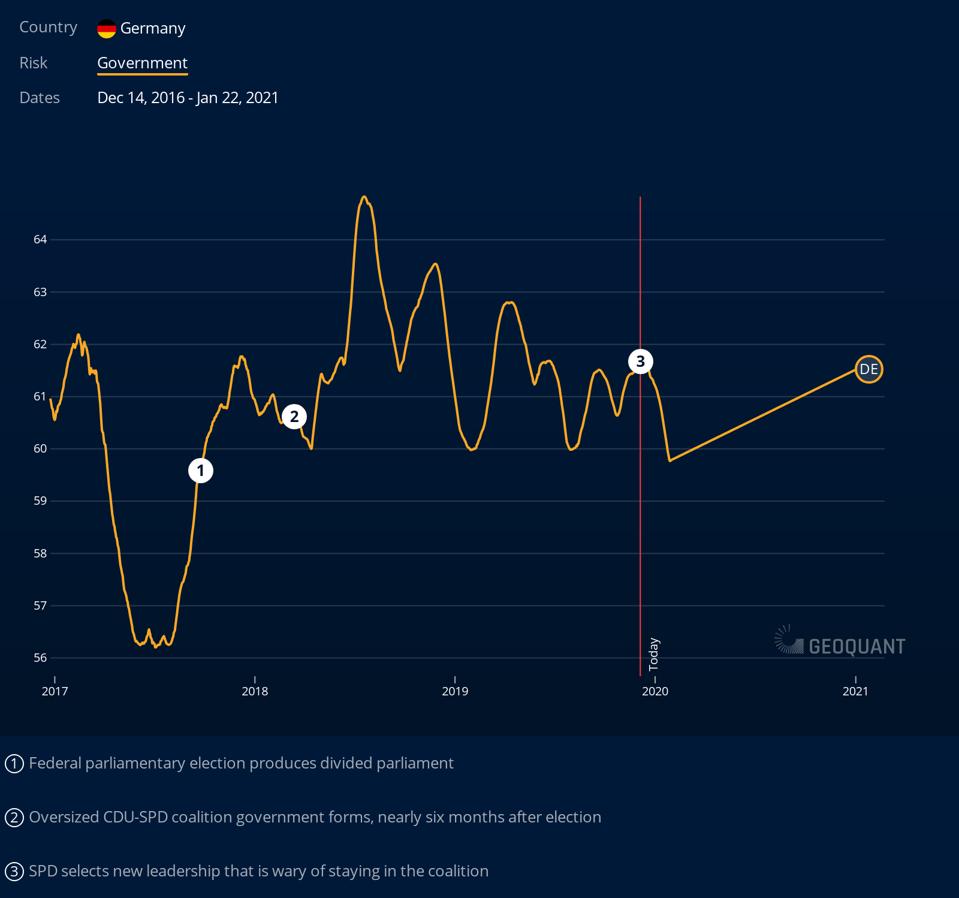 Last week we highlighted our month-ahead projection of decreasing topline Political Risk, indicating that Lebanon’s political-economic crisis was likely on a waning route to (at least medium-term) resolution. This week we focus on underlying trends in Government Instability Risk and Sovereign Risk, both of which have been — and will continue to be — top of mind for investors. The graph below highlights two core takeaways: (i) current efforts at government formation, while challenged on the street, are likely to succeed (at least in the short term); and (ii) the government will continue to take political and policy actions to reassure international investors and decrease sovereign risk. To wit, note that Government Instability Risk continues to decline through December and into 2020 (despite an upward blip over the coming days), and that the indicator is actually running lower than projected when now-caretaker PM Hariri resigned on 29 Oct, which is marked by the dashed yellow line. Note further that politically-driven Sovereign Risk remains on an overall decreasing path over the next 50 days. 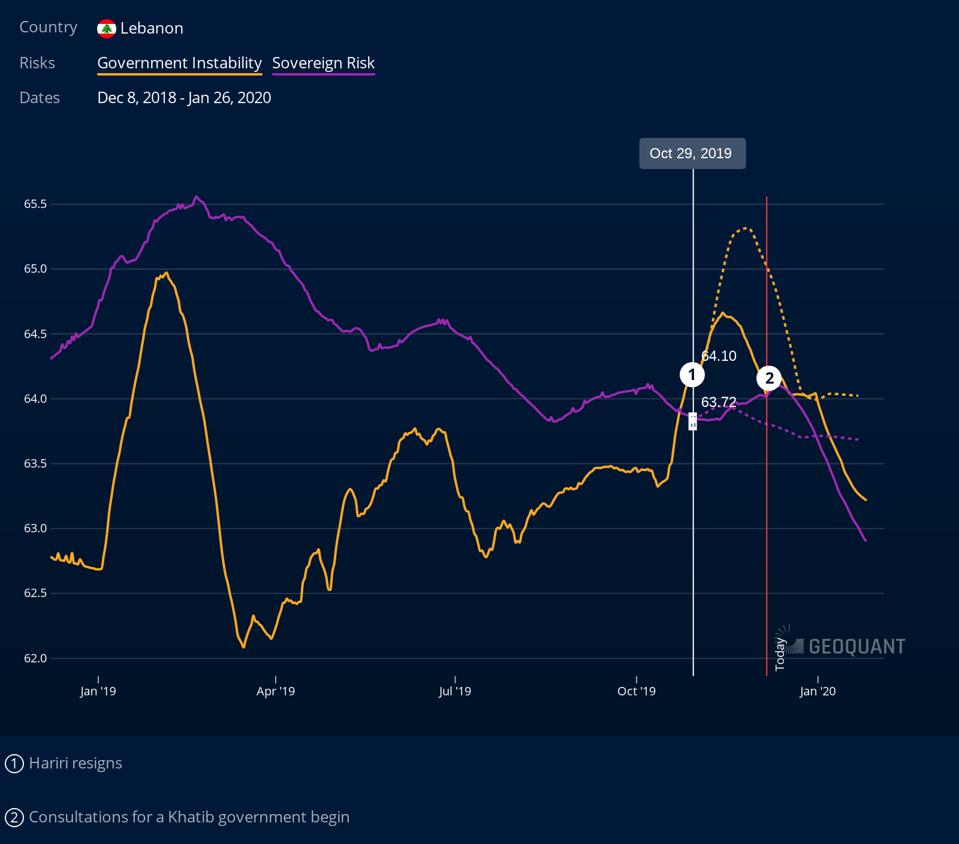 Per the figure below, Moody’s 12/2 announcement that it had upgraded Pakistan’s credit rating outlook from negative to stable comes amidst a period of declining Sovereign Risk; the announcement has also opened a wedge between our current forecast of Sovereign Risk (solid line) relative to our forecast from the date prior to the announcement (dashed line), implying a relative reduction in risk forecast to last through roughly 1H/2020. 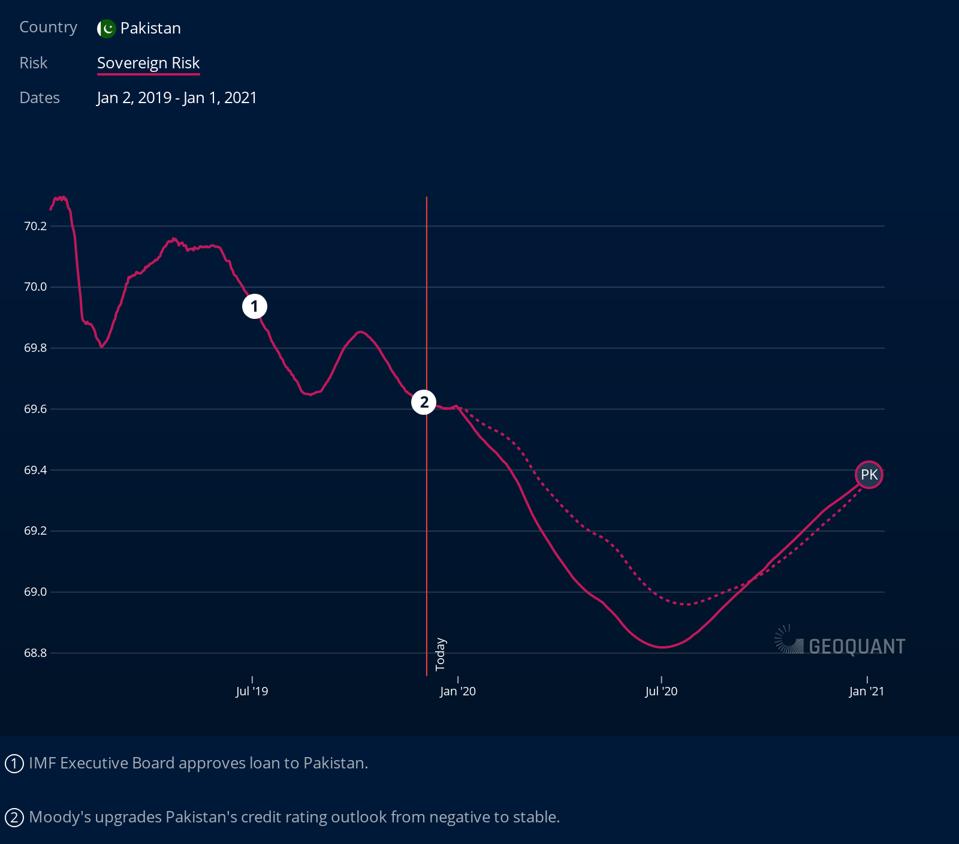 Per our own analysis (see trends in figure below), Pakistani Sovereign Risk has been increasingly positively correlated on a 26-trading day rolling basis with the 10-year yield since October 2019 (r = +.41 as of today) when Pakistan entered into its first sustained period of declining Sovereign Risk since the IMF’s Executive Board formally approved a loan package in early July; the correlation has remained somewhat weaker (r = +.27) on a non-rolling basis from July 2019 onwards. Both relationships imply greater demand for Pakistani sovereign debt (and thus lower yields) as risk decreases.

Given these findings, our forecast of declining Sovereign Risk bodes well for Pakistani finances. While we currently forecast a re-escalation in Risk beginning in 2H/2020, our data currently indicates that risk will continue to remain below levels that prevailed when the IMF agreement was signed. We expect this relief on the macro front to give besieged PM Khan some breathing room as he navigates the Supreme Court’s unprecedented rejection of his reappointment of army chief Bajwa, and against the backdrop of upward-trending Government Risk since Khan assumed office (see trend lines on the app). 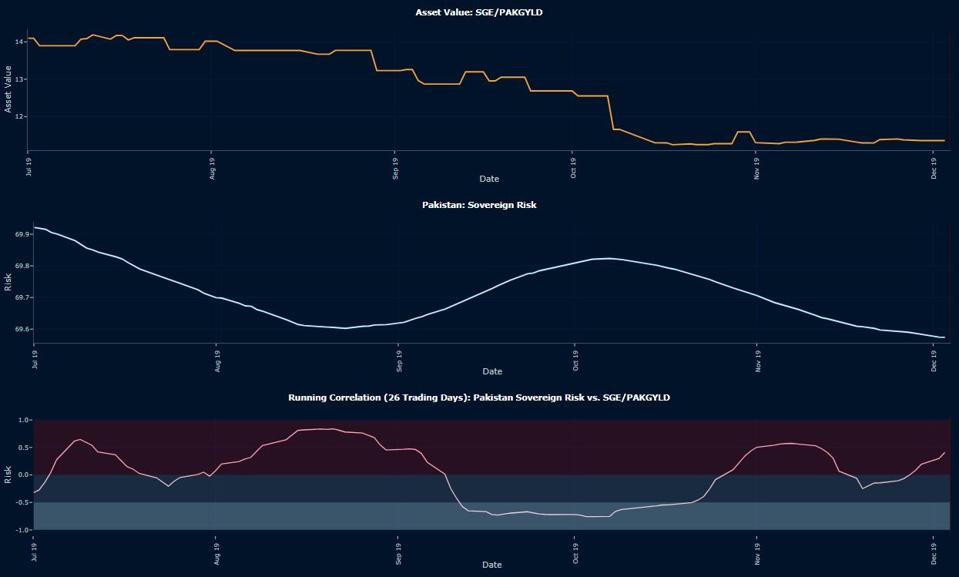 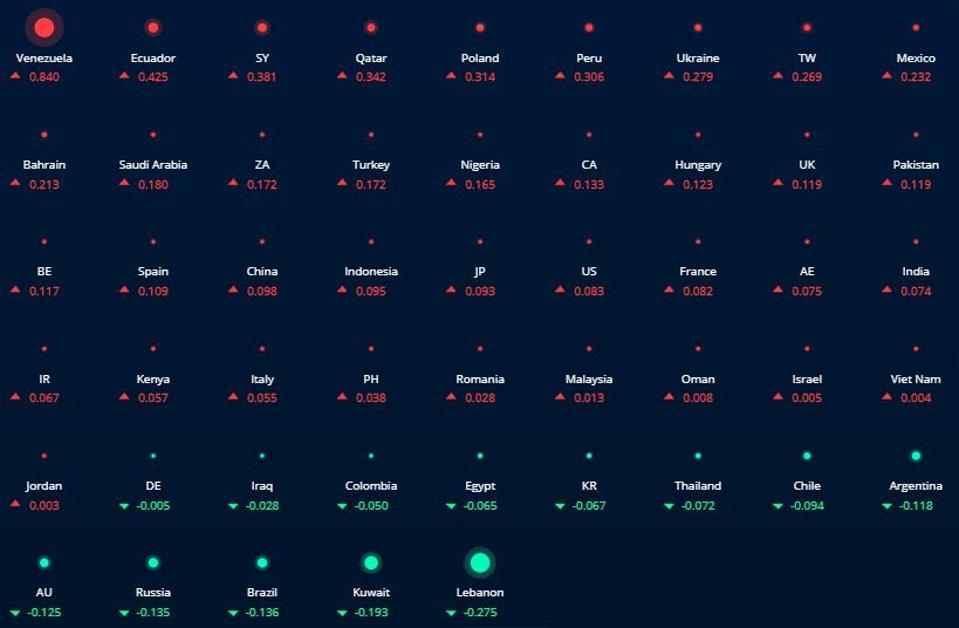 Don’t Give Your Kids An Inheritance, Give This Instead

A Decade For Sustainable Investors To Prove Economic...