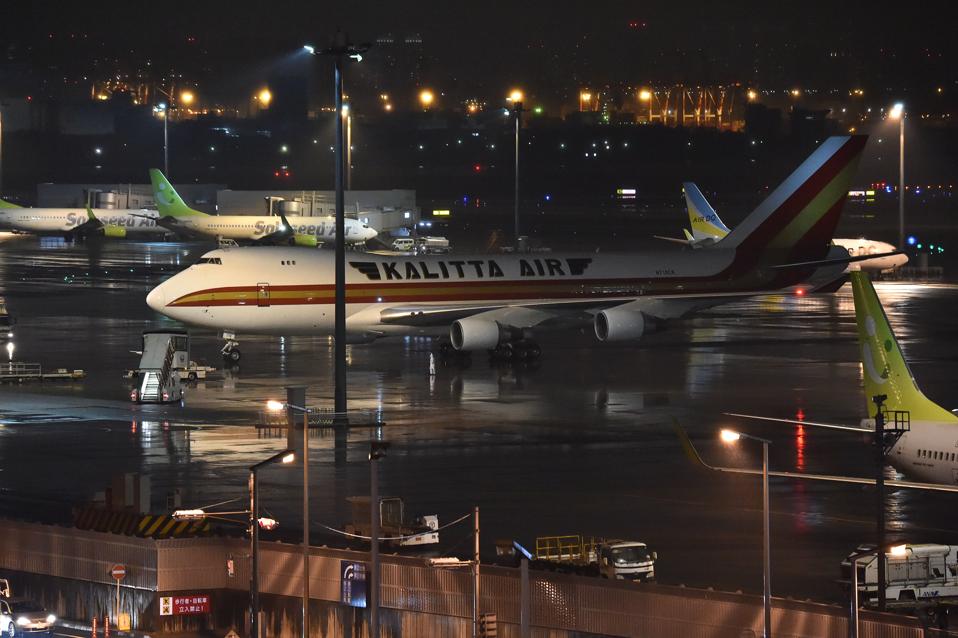 Chartered jets on the tarmac at the Haneda airport in Tokyo to evacuate US citizens from the Diamond … [+] Princess cruise ship, which has been struck by an outbreak of the SARS-CoV-19 coronavirus (Photo by KAZUHIRO NOGI/AFP via Getty Images)

Two planes carrying U.S. citizens detained on the Diamond Princess cruise ship have reportedly left Japan and are on their way back to the U.S. according to reports.

Ten days ago, the Diamond Princess Cruise ship was put into quarantine at Yokohama port in Japan after an 80-year old man from Hong Kong who had been on the ship in January, was diagnosed with the SARS-CoV-19 coronavirus after disembarking.

Since then, the number of cases on board has exploded, with the most recent figure being 355, almost 1 in 10 people on the ship. 44 Americans have been infected so far and the U.S. has just evacuated its remaining citizens from the ship, with Canada announcing similar plans and other countries such as Australia and Hong Kong expected to follow suit.

Back on February 7th when there was just 61 cases on the ships, experts were already suggesting that keeping passengers in quarantine on the ship was of more benefit to Japan than the inhabitants of the ship.

Now with almost six times as many cases, what is in store for the evacuees currently on their way back to the U.S?

“I think that it is good that the individuals are being allowed to disembark, and I think that individual countries taking on some of the burden by flying these passengers back home is essential and the right thing to do,” said Michael Mina, an infectious disease scientist and physician at Harvard School of Public Health and Brigham and Women’s Hospital & Harvard Medical School in Boston.

All passengers will be screened before being allowed to board flights back to their own countries and anyone found to be positive for SARS-CoV-19 will be transferred to a Japanese hospital for treatment. People returning to the U.S. will face an additional 14 days in quarantine, likely at Travis Air force base in California.

But are there likely to be more cases, possibly even among the evacuees?

“Yes. I think that the dynamics that we’ve seen play out here show that ongoing transmission was probably the rule rather than the exception during the quarantine,” said Mina, explaining that more people are likely to test positive for SARS-CoV-19, even after being evacuated from the ship.

The intention of the quarantine was to reduce the spread of the virus and despite the large number of confirmed cases on board the ship, it may still have had some effect on reducing transmission between people. It may be that the U.S. evacuees will be a ‘test’ to help answer the question of how effective the quarantine was.

“If those who are evacuated remain in self-quarantine during transport and thereafter and we do not see additional cases pop up in the next week or two for those individuals once they are back in the US – then we might actually infer that there was only very limited ongoing transmission during the quarantine,” said Mina, explaining that if this is the case, most of the people infected with the virus likely were exposed to it before the quarantine went into effect.

However, another possibility is that some of the evacuees will start to show symptoms and/or have positive tests for the virus after they get back to the U.S.

“I think more likely is the situation where we will continue to see some of the 360 or so US citizens who are being evacuated to the U.S. show up with symptoms or have positive test results for the SARS-CoV-19 virus,” said Mina.

It’s always easy to retrospectively decide the best course of action for a situation that has already happened and Mina called early on for the ship inhabitants to be transferred to a more rigid quarantine setting, such as hotels on the mainland. It is impossible to determine whether this would have reduced the spread of the virus, but what can be learned from this situation for similar events in the future?

“In general, everyone was placed in a very difficult situation with regards to this ship. I think individual countries, or perhaps more appropriately, Carnival Corp, which owns the Princess Cruise ship should have chartered flights for all of the passengers back to their home countries a week and a half ago, as soon as the talks of a 14 day quarantine began,” said Mina.

However, such a widespread evacuation to several different countries around the world could have risked spreading the virus further, but Mina believes that appropriate quarantines could have been put in place in these countries to ensure the safety of the public, whilst getting the cruise ship passengers home and in more appropriate accommodation.

“More strict but reasonably comfortable quarantines could be put into effect that would help curb overall spread – akin to what the US citizens who are now being evacuated will undergo,” said Mina.

For now, at the time of publishing this article, the U.S. citizens evacuated from the ship are somewhere between Japan and the U.S. mainland. Time will tell how many of them remain healthy and how many develop COVID-19 when back home, something which is essentially impossible to predict at this stage.

How To Fire A Really Nice Person

Inside The ‘Jurassic World’ Live Tour And Its...

Juice WRLD, Cardi B And The Beach Boys:...