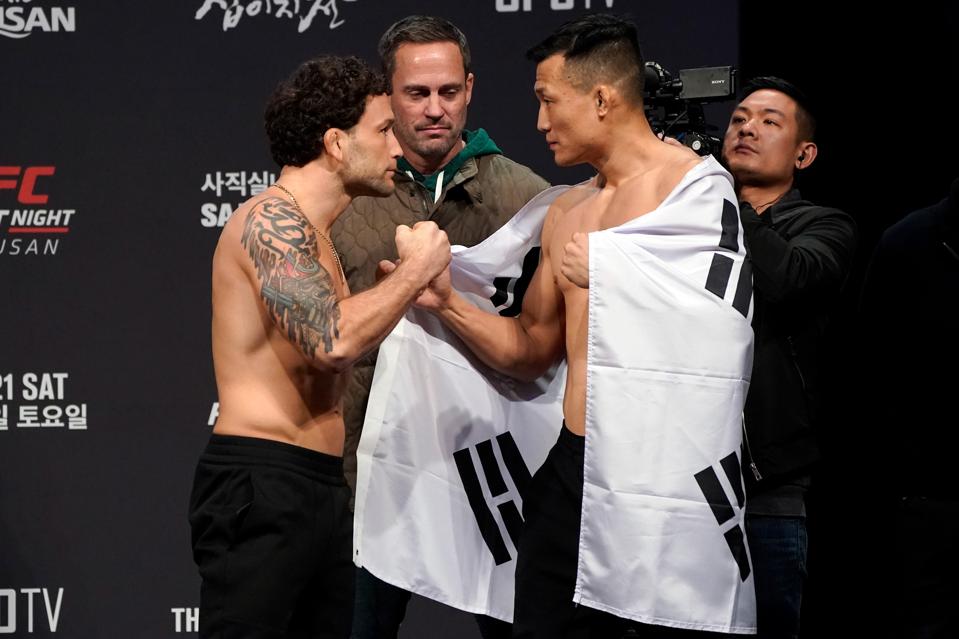 The UFC wraps up its 2019 schedule On Saturday when it pays a visit to Busan, South Korea. The fight card, UFC Fight Night 165, takes place at Sajik Arena and is headlined by a featherweight bout between former UFC lightweight champ Frankie Edgar and former UFC featherweight title challenger “The Korean Zombie” Chan Sung Jung.

Edgar and Jung were booked to face off in November 2018, but a bicep injury knocked Edgar out of that bout. Ex-UFC featherweight title challenger Brian Ortega was initially scheduled to face Jung on this card, but he was forced from the event in early December. Edgar had been in training for a bantamweight contest in January against Cory Sandhagen, but he requested the fight against Jung. The UFC granted Edgar his wish. Both Edgar and Jung are ranked in the top 10 in the featherweight division in the official UFC rankings.

A pair of top 10 light heavyweights face off in the co-headliner. In that bout, ex-title challenger Volkan Oezdemir meets Aleksander Rakic. Oezdemir bounced back from a three-fight losing skid in August when he scored a second-round knockout over Ilir Latifi. Rakic began his UFC career with two decision victories. He has two first-round knockout wins in his two most recent outings. Rakic is in the midst of a 12-fight winning streak.

Following the main event, the UFC will hold the post-fight press conference for the fight card. The competitors headlining bouts, as well as other main card fighters, are expected to spend some time with the media after the main event ends.

The post-fight press conference is expected to begin around 8:15 a.m. ET.

How To Watch Or Stream UFC Fight Night 165: Oezdemir Vs. Rakic

Box Office: ‘Joker’ Bottoms Out As It Nears...

3 Key Milestones Every Entrepreneur Can Reach Before...

From Buffett to Bloomberg: The 25 Philanthropists In...