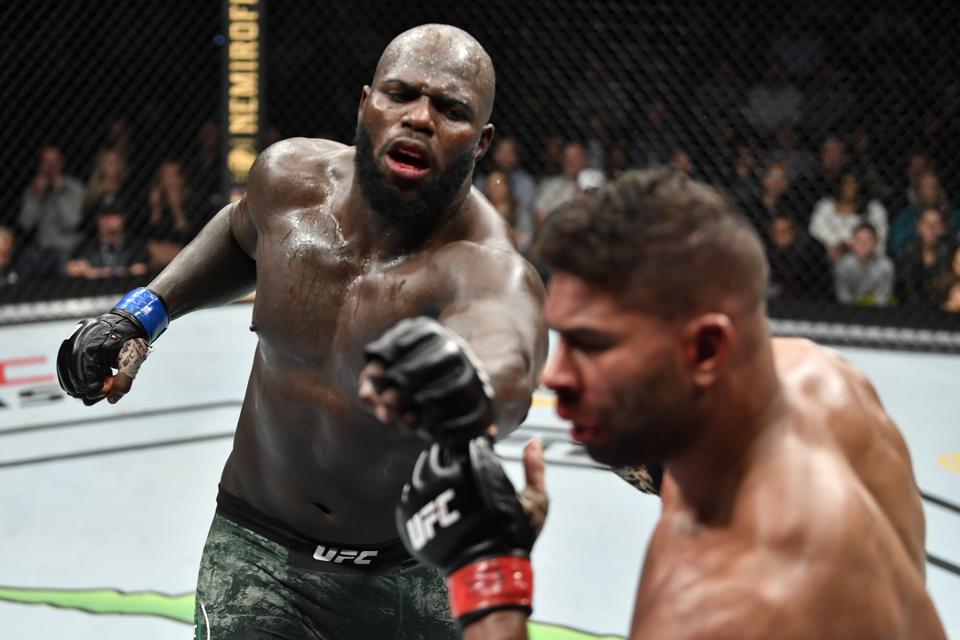 WASHINGTON, DC – DECEMBER 07: (L-R) Jairzinho Rozenstruik of Suriname punches Alistair Overeem of … [+] Netherlands in their heavyweight bout during the UFC Fight Night event at Capital One Arena on December 07, 2019 in Washington, DC. (Photo by Jeff Bottari/Zuffa LLC via Getty Images)

Jairzinho Rozenstruik needed all but four seconds of the allotted 25 minutes, and a slightly controversial call from referee Dan Miragliotta in his main event matchup with Alistair Overeem on Saturday night in Washington D.C., but he got it done.

Rozenstruik scored a savage fifth-round KO victory with a hard right hand that dropped Overeem, and split the latter’s lip with the shot. Amazingly, Overeem immediately got to his feet. He was wobbled and Miragliotta stopped the fight with just four seconds remaining.

Here is a look at the KO and the damage to Overeem’s face:

It looked as if Overeem deserved the opportunity to gather his wits, or for Miragliotta to ask him some questions to check his wherewithal. That didn’t happen, but in Miragliotta’s defense, he likely saw Overeem’s lip and immediately decided that was enough.

Worst yet, Overeem was up on all three of the judges’ scorecards.

Overeem came into the evening ranked No. 6. in the UFC’s heavyweight division and Rozenstruik was No. 14. That will change when next week’s rankings are released. It was a tough luck loss for Overeem who was in control throughout the fight, but he seemed to tire greatly in the fifth round. Rozenstruik kept pushing forward and finally he got his opportunity to land a bomb.

The win pushed Rozenstruik’s record to a perfect 10-0 with nine KOs. Overeem falls to 45-18. This was the 14th time he’s been knocked out during his professional MMA career. Rozenstruik wants to face Francis Ngannou in spring 2020. With Daniel Cormier and Stipe Miocic likely headed for a third fight, that’s probably the best fight Ngannou can get–unless he’s matched with Derrick Lewis. Perhaps that’s why Ngannou quickly took to Twitter to seemingly accept the challenge.

We’ll see what the next announcement is regarding both Ngannou and Rozenstruik. 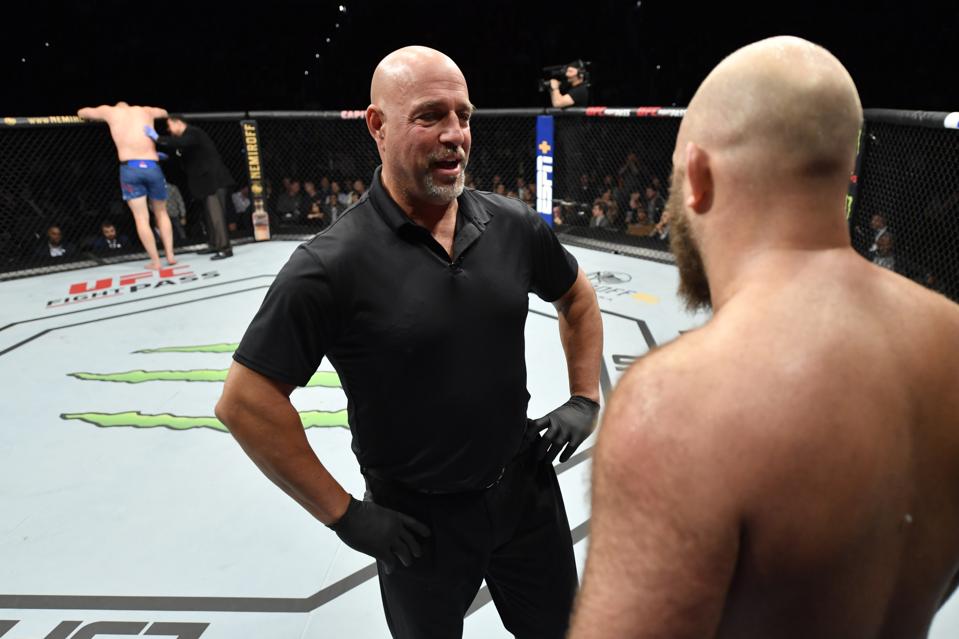 WASHINGTON, DC – DECEMBER 07: (L-R) Referee Dan Miragliotta speaks to Ben Rothwell after an … [+] accidental groin strike to Stefan Struve of Netherlands in their heavyweight bout during the UFC Fight Night event at Capital One Arena on December 07, 2019 in Washington, DC. (Photo by Jeff Bottari/Zuffa LLC via Getty Images)

In addition to his decision to stop the Rozenstruik-Overeem bout, Miragliotta also seemingly fumbled his responsibilities during the Ben Rothwell vs. Stefan Struve fight. Rothwell hit Struve with two egregiously low kicks to the groin. Only one point was deducted.

Struve could have taken the easy way out and declined to finish after two lengthy delays, but he decided to continue. The last one happened with just under two minutes remaining in the third round. Miragliotta could be heard advising Struve to continue because he was probably up on the cards. 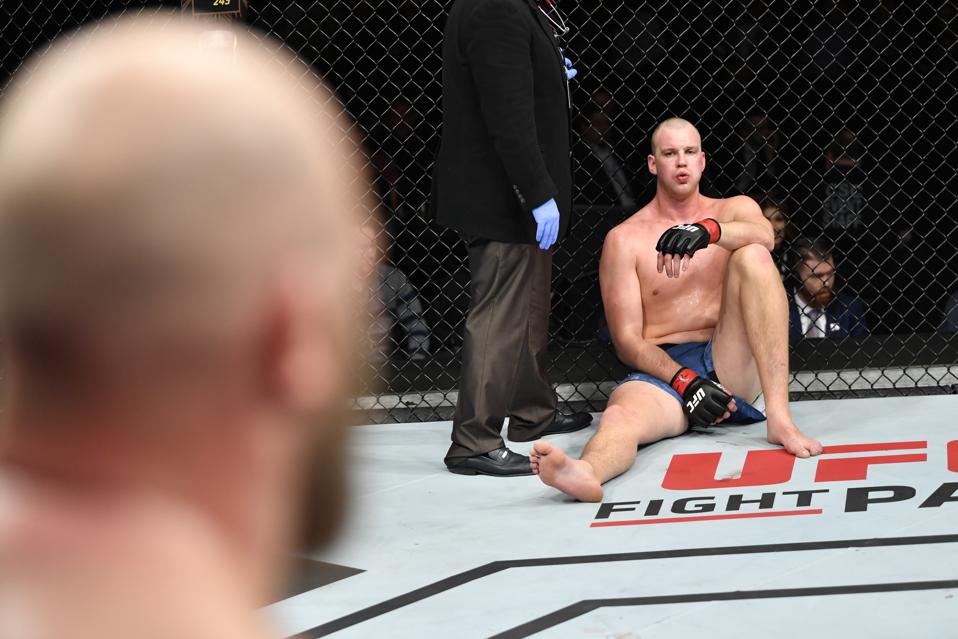 WASHINGTON, DC – DECEMBER 07: (R-L) Stefan Struve of Netherlands reacts after his TKO loss to Ben … [+] Rothwell in their heavyweight bout during the UFC Fight Night event at Capital One Arena on December 07, 2019 in Washington, DC. (Photo by Jeff Bottari/Zuffa LLC via Getty Images)

That was clearly overstepping his bounds as a ref, and could be seen as putting pressure on a fighter to continue when he wasn’t ready.

Something tells me this will be a thing into next week.

Here is a look at all of the results from Saturday’s event. The fighters who received a performance bonus are in bold.

Never fill out your MMA awards ballots too soon. Here we are with only three UFC events remaining in 2019, and the Washington D.C. show delivered two finishes that might be the best of their kind this year.

To begin the show, Mahkmud Muradov planted Trevor Smith with one of the most savage overhand rights you’ll see. The punch caught Smith flush on the chin, sent his mouthpiece flying, and left him unconscious on the mat.

Muradov was already on the radar as a middleweight to watch, but this Performance of the Night finish should take things to another level.

Bryce Mitchell is another rising star in the UFC. The 25-year-old Arkansas native pulled off only the second Twister finish in UFC history when he submitted Matt Sayles on Saturday:

Mitchell’s grappling and post-fight interviews have him rising in the consciousness of MMA fans. Before long, he’ll be matched with his first ranked opponent. for now, this submission helped lock up a POTN bonus.

Stay tuned for weeklong coverage of the event.

AEW Dynamite Results: News And Notes After The...

4 Foolproof Hacks For Making Your Dreams A...