Update On The Senate Multiemployer Pension Rescue Proposal: The NCCMP’s Point Of View 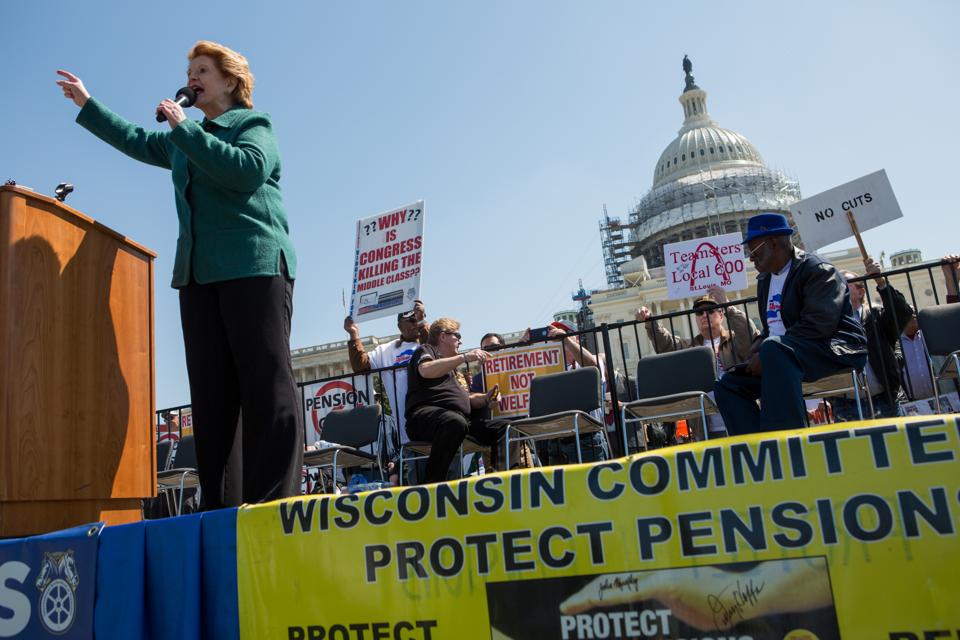 WASHINGTON, D.C. – APRIL 14: Sen. Debbie Stabenow (D-MI) speaks to a crowd gathered on the West … [+] Front of the U.S. Capitol building for a rally with Teamsters Union retirees who traveled from across the country to voice their opposition to deep cuts to their pension benefits on April 14, 2016, in Washington, D.C. Thousands are facing massive pension cuts because of a law called the Multiemployer Pension Reform Act of 2014 (MPRA). (Photo by Allison Shelley/Getty Images)

What’s the right solution to the crisis facing multiemployer pension plans (refresher: insolvency pending in 2025)? On one extreme, some of my commenters insist that, since the plans in question are blameless and the fault lies with Wall Street, they are owed a fix entirely without cost to them. On the other hand, some others insist that the plans’ failures are entirely their own fault and no taxpayer money should be spent to prop them up. The Butch Lewis Act promised the something-for-nothing sleight of hand of offering low-interest loans intended (in its original form) to be invested in high-return assets, though it was ultimately tweaked but still came with a promise that those loans would be forgiven if plans were unable to repay them when they came due, far enough in the future as to game the budgeting/costing system.

The answer is, of course, compromise — a mix of government funds, increased funding/premiums, and benefit cuts that asks as much as is reasonable of plan sponsors and participants and retirees (taking into account their entire financial picture, including the need to continue to stay in business) and uses federal funds to fill in the gaps. Has the Senate’s proposal hit this target? It’s hard to say, without the full release of the financial details, the calculation of which is still underway, but, in a letter addressed to Senators Grassley and Alexander by the National Coordinating Committee for Multiemployer Plans (NCCMP), the NCCMP and its executive director, Michael Scott, report that, in their view, the proposal falls short.

“The employers, unions, participants, and the plans they sponsor are not, nor could they afford to be, responsible for the financial health of the entire multiemployer system. The proposal imposes a number of requirements on plans, participants, employers, and unions that would in fact be quite punitive and result in great damage to them and the 85 percent of the multiemployer system that are successfully meeting their obligations. The first order of business in bipartisan multiemployer pension reform should be to ‘do no harm.’. . . .

This is crucial — there is a balancing act that is not always easy to navigate. When Congress passed the Pension Protection Act (PPA) of 2006, and when they increased Single Employer PBGC premiums in 2015, the intention was a worthy one, increasing the funding level of those plans and the stability of the PBGC (well, that, and meeting government revenue targets, because increased premiums were counted as new government revenues in budget scorekeeping), but each such change escalated the pace at which employers froze, closed, or de-risked (with annuity and lump sum buyouts) their pension plans. Do the Senate’s proposed reforms risk having the same impact on the multi-employer system — even those plans like the Seafarers’ which are overfunded on the standard calculation basis and fully-funded even with the more conservative method?

What are the NCCMP’s specific objections?

First, the extent of the PBGC premium increases. Taking into account the increases in fixed premiums, the addition of a variable premium, new taxes, and the “co-payments,” this amounts to a 1,400% increase in the amounts that employers and paricipants pay into the system. While they do not object entirely to any such increases, these amounts, Scott says, go too far:

“These increases, to the extent that they do not bankrupt companies, will drive employers and their workers out of the multiemployer pension system.”

In addition, the fact that the Senate’s plan promises federal funding without quantifying the extent of the support envisioned, imperils the Senators’ ability to gain support until this is rectified. Scott writes,

“The government was excluded from materially contributing to the proposed solution.”

Second, they object to the proposal to reduce the discount rate that serves as the basis for the calculation of plan liabilities. At present, the baseline calculation of liabilities uses as its discount rate the expected return on plan assets (similar to the calculations of state and local public sector pension plans); the Senate’s proposal envisions a switch to a corporate bond-based rate (similar to the funding and accounting requirements for single-employer private sector plans). Due to the very low corporate bond rates at present, and the substantial gap between corporate bonds and expected returns for diversified portfolios, this would have the effect of boosting plan liabilities substantially for most plans (that is, except those which currently have conservative investments), boosting the number of plans deemed unfunded and the contributions required for those plans, and creating significant volatility in funding levels, given that, at least at present, corporate bond rates have fluctuated dramatically.

Now, I’ll be the first to say that there is no easy answer here. Single-employer pension plans had also used asset return-based discount rates until the implementation of the aforementioned 2006 PPA, but with corporate bond-rate minimum funding targets added on over time. On the other hand, a riskier long-term asset return rate makes more sense in instances in which plans bear the risk, with employers able and willing to increase contributions as needed, than in cases in which benefits are fixed and and there’s little room to increase contributions over time to compensate for asset losses. Does the Senate reform include the necessary latitude for these plans to make benefit cuts to compensate for underfunding levels that a plan is at greater risk of when using an investment return-based discount rate? It’s not clear to me.

In any case, however, there is a difference between that which is the best method as a general principle and what is feasible in the present circumstances, in which the switch (with a five-year phase in) can be very disruptive to plans deemed healthy under current rules, because it would not only affect future contributions for future accruals, but require plans to remedy newly-created underfunding levels for existing accrued liabilities.

Third, employers who wish to withdraw from the plan must pay a withdrawal liability; its calculation is complex, and the Senate’s proposed changes are likewise so. Suffice it to say that the NCCMP objects to these changes, as well as changes to the method by which plans are “partitioned.” Scott also raises concerns with other technical elements of the proposal.

In the end, though, it is important to note that the NCCMP does not declare this proposal “DOA” but instead comment that it “advances a number of very positive and constructive ideas.” In the end, this critique illustrates the considerable difficulty with putting together a proposal that remedies the short-term crisis, sets the multiemployer system up for long-term success, and makes all parties happy, or at least satisfied with the fundamental fairness of the solution.

As always, you’re invited to share your comments at JaneTheActuary.com!

Congress Offers A Regulatory 2.0 Upgrade To CFTC For Digital Commodities

Ask Larry: When Should My Husband And I...