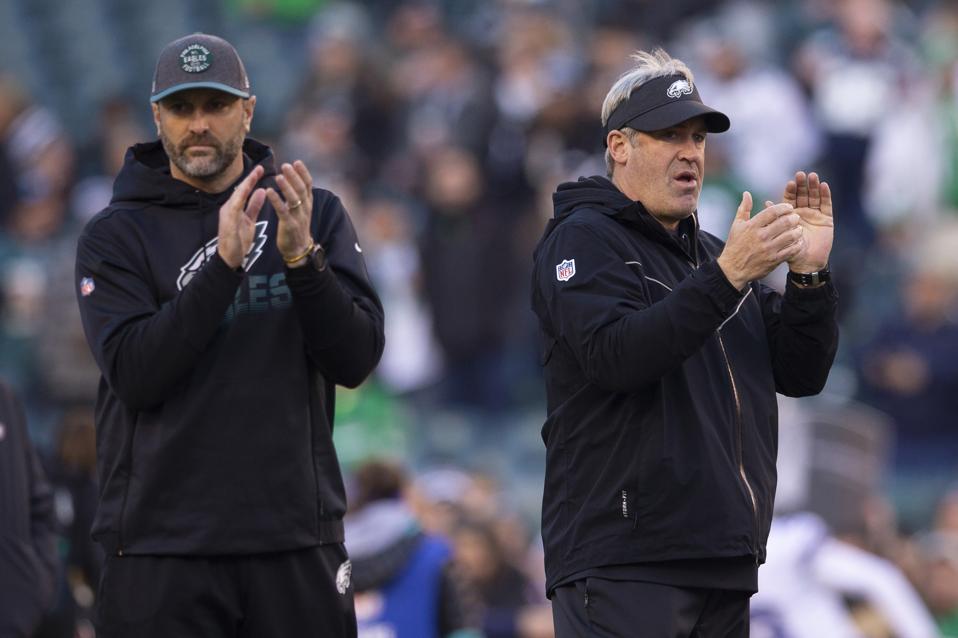 While nobody threw out the red challenge flag following the Eagles’ Wednesday end-of-the-year press conference, apparently Doug Pederson and Howie Roseman decided to further review some of their comments anyway. Or maybe it was owner Jeffrey Lurie pulling rank, as some suggested.

Whoever is was that made the call, it led to them doing a complete 180 earlier today and send both offensive coordinator Mike Groh and wide receivers’ coach Carson Walch packing some 24 hours after indicating both would be coming back.

“I apologize for any confusion that I created during yesterday’s press conference,” said Pederson in a prepared statement, trying to save face. “It was my intent to not comment on any of my staff during the ongoing evaluations, because I wanted to be able to go through the process and communicate any decision directly with the individuals.

“I did a poor job of explaining that the first time I was asked. I will continue to evaluate everything, and consider all possibilities to improve our football team.”

While the situation has to be a bit embarrassing, the decision to move on from Groh and Walch hardly comes as a shock. Almost from the day he was promoted from receivers’ coach to coordinator, Groh has been under scrutiny.

Fans had seen how smoothly the offense ran under predecessor Frank Reich, considered one of the leading architects in their Super Bowl run. And when things sputtered over the past two years they often pointed to Groh as the reason. While Pederson continued to publicly endorse him, especially towards the end of the season when the Eagles won their last four games to win the NFC East, there remained speculation his position might still be in jeopardy.

The same applied to Walch, who caught heat from those fans when third year receiver Mack Hollins and rookie J.J. Arcega-Whiteside struggled fitting into the offense after starters DeSean Jackson and Alshon Jeffery went down with injuries. Hollins in fact, went eight weeks without making a catch, until he was finally released in mid-November, shortly after Walch sang his praises about how well he was playing.

That’s when Greg Ward came off the practice squad and immediately established himself as a viable option, followed by Josh Perkins and Deontay Burnett. While Pederson heaped a ton of praise on Walch in his public comments for having those players prepared, it wasn’t enough to save his job.

“It was not an easy decision for me to make and I appreciate everything that Mike Groh and Carson Walch contributed to the organization and to my staff,” began Pederson in his statement. As I said (Wednesday), they were a big part of our success down the stretch this past season.

“This is one of the most difficult parts of the job and something that weighs on me, but ultimately I have to make decisions that I believe are in the best interest of the football team moving forward.”

So who’s next? And how much are the Eagles willing to spend to get him? The early front-runner is running backs’ coach/assistant head coach Duce Staley, who lost out to Groh when Reich left to take over the reins in Indianapolis. The 44-year-old Staley, who was a fan favorite here while rushing for 4,807 yards and 22 touchdowns in his seven years as an Eagle—which included a time Pederson was his teammate—has been waiting for his opportunity.

Duce has gotten rave reviews from his pupils, most recently rookie Miles Sanders, who flourished as the season went on to lead the team in rushing with 818 yards. He follows Josh Adams, LeGarrette Blount, DeMarco Murray and Ryan Matthews as the team’s fifth consecutive different leading rusher since LeSean McCoy left in 2014.

But just because promoting Staley might be the prudent move doesn’t necessarily mean it’s the way they’ll go. Should the Eagles decide to go outside the organization speculation has ranged from former Redskins’ coach Jay Gruden, to current Chiefs’ quarterback coach Mike Kafka, a one-time Eagle QB himself, even to recently fired Giants’ coach Pat Shurmur. Shurmur, of course, served as Chip Kelly’s offensive coordinator and even finished out the 2015 season after Kelly was let go.

Contractually, it figures to cost more to bring in a Gruden, Shurmur or Marty Mornhinweg, offensive coordinator for Andy Reid’s here and for John Harbaugh in Kansas City, than Staley. Will that factor into the decision?

One other thing: should Duce not get the job don’t be surprised if he heads somewhere else.

There may be other changes on the horizon—with quarterbacks’ coach Press Taylor and secondary coach Corey Undlin, whose unit has not measured up the past two years—the likeliest to join Groh and Walch on the unemployment line. So look for Pederson & Co. to try to it all done as quickly as possible in order to move on to the business of reshaping the roster.

You don’t need a red flag to know that will be a challenge all its own.

Creator Ilana Pena Shows What Makes Up The...

Guardiola: ‘Phenomenal’ Liverpool Would Win The League In...

Mission-Critical: Five Ways To Keep From Falling Behind...