Vaping-Associated Lung Injuries: Here Is The Latest On Vitamin E From CDC 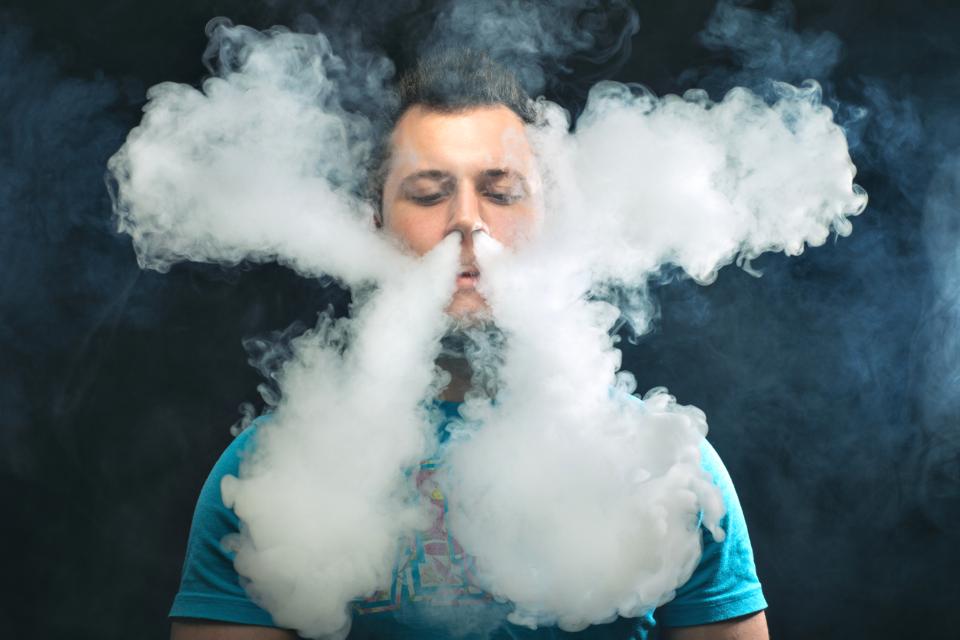 Is the cause of the outbreak of vaping-associated lung injuries still unclear? (Photo: Getty … [+] Images)

Vitamin E or not vitamin E. That seems to be the question.

Public health officials, health professionals, and other scientists have been going back in time, trying to figure out what specifically has caused this recent surge in e-cigarette or vaping associated lung injury, otherwise known as EVALI. As a December 20 Centers for Disease Control and Prevention (CDC) update summarized, there is now more evidence of a link between vitamin E acetate and the lung injury among vapers, with an emphasis on the word link.

But does all of this mean that vitamin E is the culprit and that vaping without vitamin E acetate will not cause lung injury? Well, as the titles of two rom-coms said, definitely maybe, it’s complicated. It isn’t E-Z to go back and figure out what happened when vaping hasn’t been well-studied in the first place.

The CDC pointed to a study just published in the New England Journal of Medicine that analyzed the bronchoalveolar-lavage (BAL) fluid of 51 patients with EVALI and from 99 healthy participants. Before you start searching your local grocery or automotive store for BAL fluid, here’s what it is. To collect BAL fluid, a doctor uses a bronchoscope, which sounds like the mascot for the Denver NFL football team plus some mouthwash. It’s called a bronchoscope because this long flexible tube-like scope goes into your mouth, down your windpipe, and into the bronchial tree in your lungs. Here is a picture of that bronchial tree: 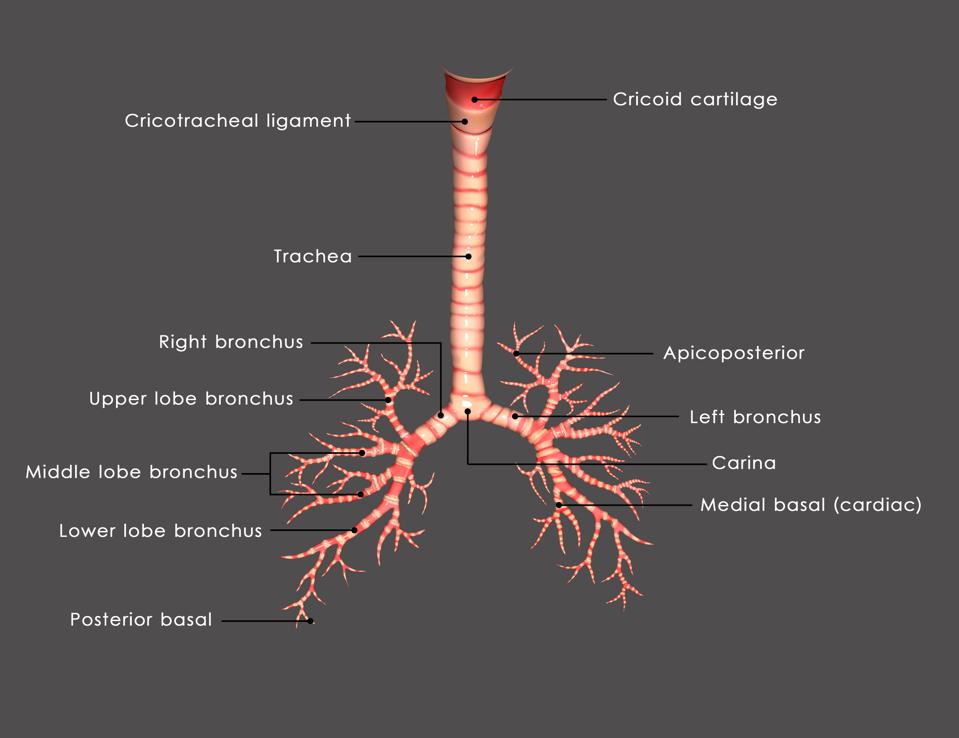 At the end of the bronchi are alveoli, balloon-like structures where oxygen and carbon dioxide exchange occur between the air that you breathe into your lungs and your bloodstream. The picture below shows how these round-alveoli are interlaced with blood vessels with one grape-like cluster of alveoli cut in half to show the insides of it: 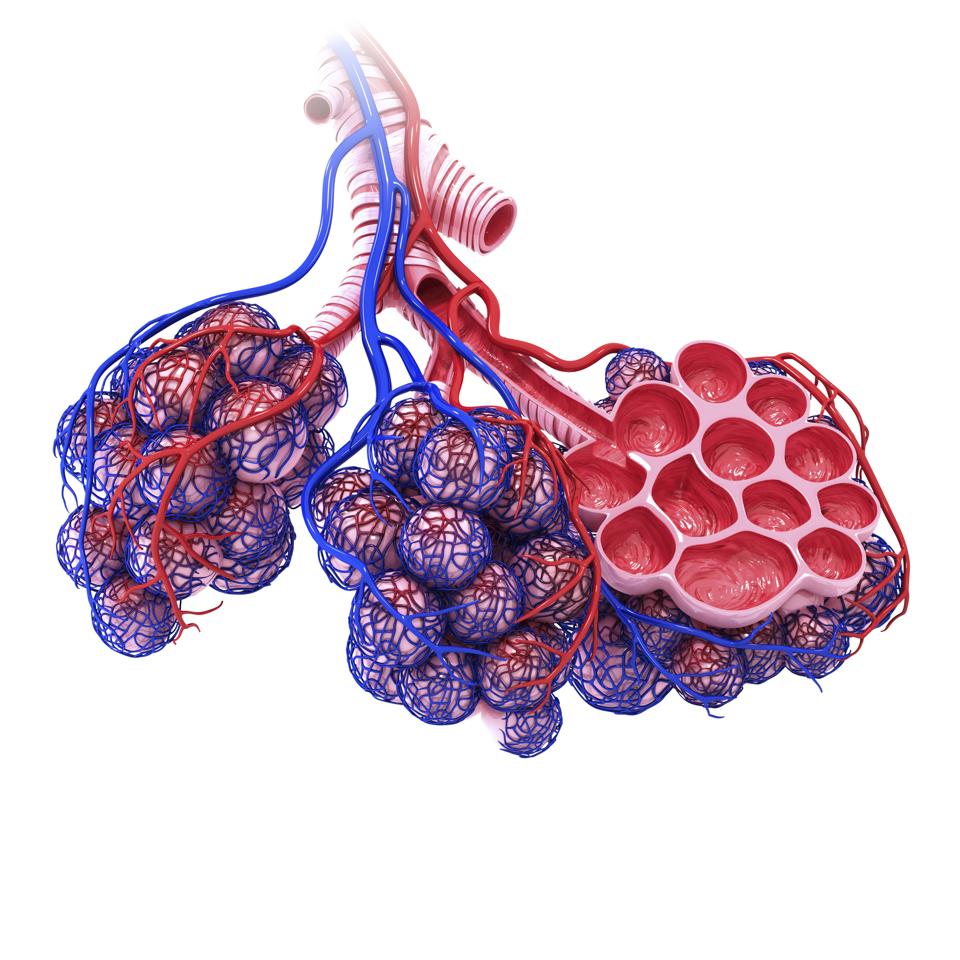 A lavage is when you inject fluid into a body cavity to wash out the area. So, never ever drink something with the label “lavage” on it. In the case of a BAL, the lavage fluid comes from a bronchoscope injecting fluid into bronchi and alveoli, which in turn washes these areas, and then collecting whatever cells, microbes, chemicals, or debris may end up in the fluid. Doctors frequently use a BAL to determine what may be in the lungs and what may causing problems.

Of note, this study used a relatively small convenience sample from 16 states of the 51 patients with EVALI. A convenience sample doesn’t imply that everyone was in a convenience store but means that the researchers chose whatever patients happened to be readily available. In other words, they did not use scientific means to carefully choose patients to make sure that the sample was not obviously biased. With a total of 2,506 reported hospitalizations and 54 reported deaths from EVALI so far, these 51 cases in the study may or may not be typical or representative of all the other cases. Again, definitely maybe.

The research team found Vitamin E acetate in the BAL from 48 of the 51 patients with EVALI but none of the 99 healthy participants. One patient with EVALI had coconut oil and another had limonene in their BAL specimens. Otherwise, the researchers couldn’t find any other potentially toxic substances that they were looking for, with an emphasis on the words “that they were looking for,” in the spirit of the U2 song. Therefore, this doesn’t rule out other substances or mechanisms that the research team did not search or test for in the study.

Of note, the research team had access to additional tetrahydrocannabinol (THC) data for 50 of the 51 participants with EVALI. Most, 47 out of 50, either had “detectable tetrahydrocannabinol (THC) or its metabolites in their BAL fluid or had reported vaping THC products in the 90 days before the onset of illness.” The research team did find nicotine or its metabolites in the BAL fluid from 30 of 47 patients with EVALI who were tested for these things.

These findings were consistent with an earlier CDC study published in the November 15 issue of the Morbidity and Mortality Weekly Report (MMWR). That study was an examination of the BAL fluid samples from 29 patients with EVALI from 10 different states. This earlier study used a convenience sample as well and showed vitamin E acetate to be present in BAL fluid from all 29 patients. Here is a CBS Evening News segment on that study:

It wouldn’t be far-fetched to suspect vitamin E acetate as the baddie in the EVALI outbreak. After all, testing of THC-containing vaping products used by those with EVALI did find Vitamin E acetate, which may be used as an agent to thicken the e-fluid. While there haven’t been too many studies on inhaling vitamin E, there is evidence that vitamin E acetate can damage the lipids and proteins that line your alveoli, known as surfactant. If you damage this surfactant, your alveoli may not be able to maintain their balloon-like shape and flexibility and properly exchange oxygen and carbon dioxide. If you are an oxygen-breather, you know that this can be a bad thing.

Moreover, heating vitamin E acetate, as you do in vaping, can break vitamin E acetate down into a compound called ketene. The National Library of Medicine’s PubChem database describes ketene as a “colorless highly reactive gas with a penetrating odor.” It says that it “reacts violently with water” and “severely irritates the eyes, the skin and the respiratory tract.” The PubChem entry also calls ketene “a severe lachrymator,” which means that it will make you cry a lot more than the movie Titanic. Indeed, ketene doesn’t sound like a good compound to have in your lungs.

But before you call the EVALI outbreak a “vitamin E true cause-and-effect Hollywood story,” keep in mind that links may be good for sausages but do not prove cause-and-effect. All of this so far only shows a possible association between vitamin E and lung injury. There is still the possibility that vitamin E is just a bystander. Its presence in the products and lungs does not necessarily mean that it is the culprit. That would be like arriving at a crime scene and arresting everyone who is present, including innocent bystanders and witnesses. Additionally, even if vitamin E acetate can damage lungs, it may not be the only thing in or about vaping that can cause lung injury.

As Marty McFly and the Avengers will tell you, going back in time to figure things out can be challenging. The problem is that many e-cigarette products have hit the market before the science could really be determined and established. There just haven’t been enough real scientific studies on vaping to say for sure what its benefits and risks may be. Could this EVALI outbreak be just limited to some rogue THC-containing vapes? Or is it a broader concern for vaping in general? Again, it’s complicated. More scientific studies on vaping and possible lung injury are needed. In the meantime, beware of any claims about vaping or e-cigarettes that don’t have rigorous peer-reviewed scientific evidence behind them. It may all just be smoke.

How AI Can Help Astronauts Stay Healthy In Space

The Fed Does Not Need Fedcoin To Protect...