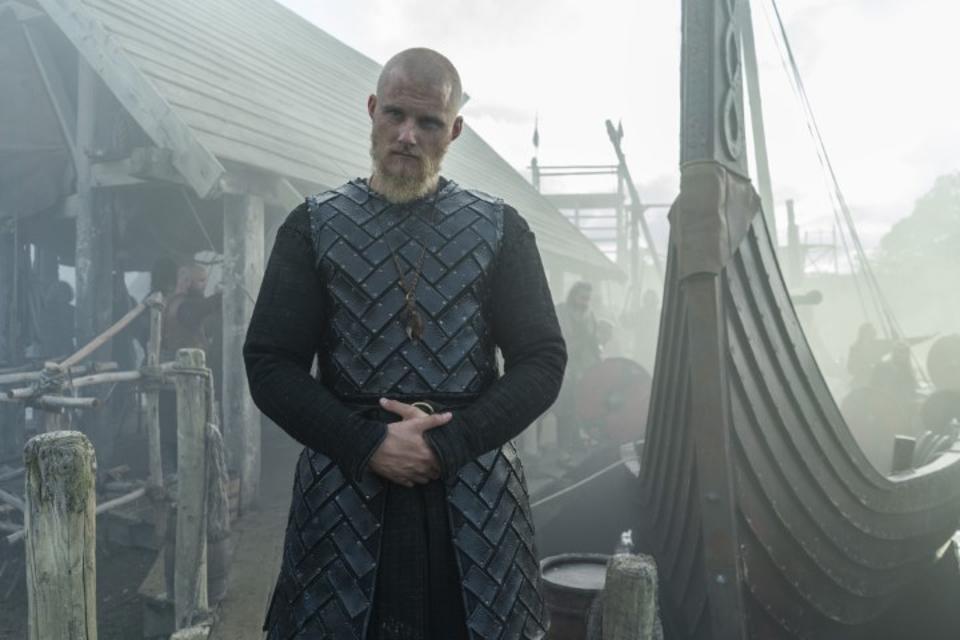 Vikings is much better than last season, but in its second week we’re still setting the stage for a … [+] conflict that’s yet to truly materialize.

I’m happy to report that Vikings is much better—so far—in Season 6 than it’s been in a long while. Partly this is due to certain bishops no longer mucking things up with pointless melodrama. Partly it’s due to Ivar becoming more human, less supervillain, and less all-powerful. Mostly it’s just better writing, even if the show retains some of its more irritating tendencies.

Tonight’s episode—Ghosts, Gods and Running Dogs—continues to set the stage for the broader conflict. There’s less action and more build-up, chess pieces thrust hither and thither across the board, none ready to fall just yet.

It also reintroduces us to King Harald Finehair and his new captor, King Olaf. So many kings. Finehair has, like Ivar in the last episode, grown a nice full beard and long (fine) hair. 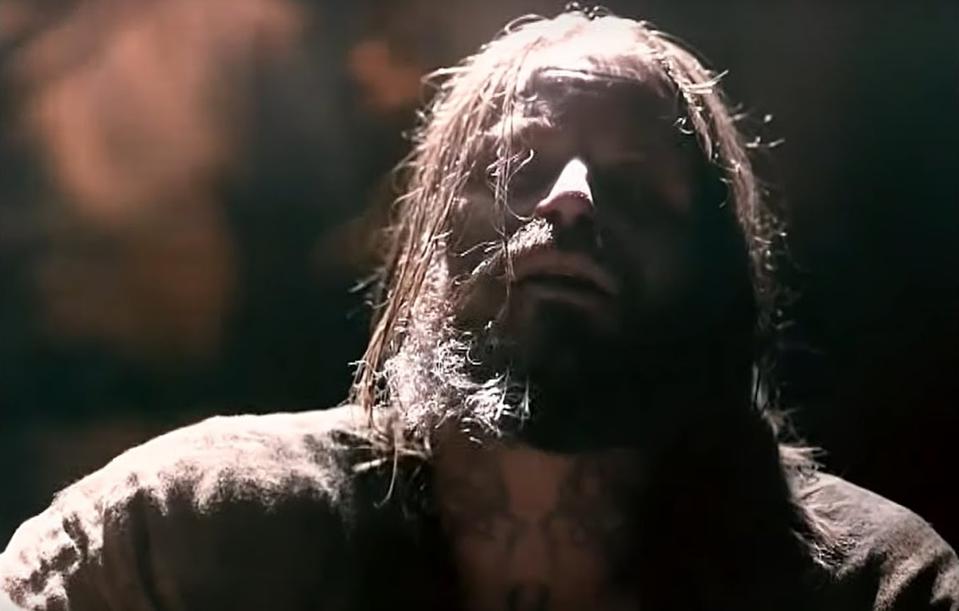 He’s brought before his captor king to dine with him. They have one of Vikings’ typically cryptic conversations. Olaf tells him that he’s sure of one thing, that “the Christian God will destroy our gods” but not before he safely reaches Valhalla.

He tells Harald he’s not sure whether he should kill him or let him live, and has him dragged back to his prison.

Later, Finehair tries to bribe his way out of Olaf’s prison, offering his guard—a littler person—what he wants: To become a king. But his jailer doesn’t believe him. The little man tells him that Bjorn Ironsides has arrived with a very large fleet, perhaps to come and rescue him.

Bjorn is loyal to the men he’s indebted to—less so to the women he pledges himself to. 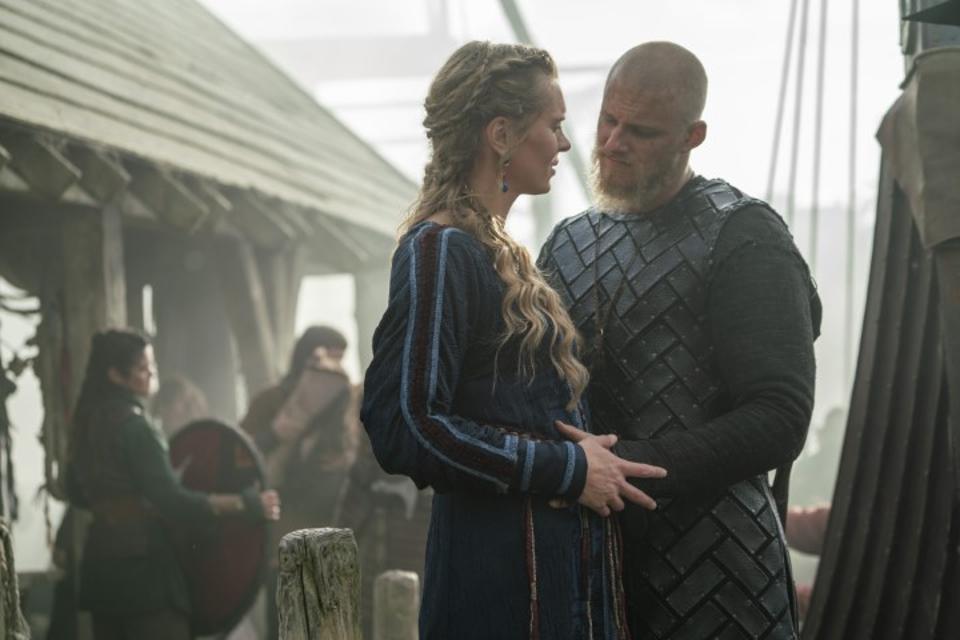 In Kattegat, Bjorn once again finds himself speaking with Ingrid (Lucy Martin) who tells him bluntly that she wants him and says she brings every man she’s with good fortune. At first he resists. But only vaguely, and not for long.

“Don’t deny the gods,” she tells him later, sprawled naked across the bed (before climbing under the blankets because this is TV) in that most Vikings of seductions, all while a sacrifice ritual takes place outside on the beach. Bjorn forsakes his vows as a priestess painted in white slits a goat’s throat.

I think it’s safe to say that Bjorn will never be faithful, and that the apple doesn’t fall far from the tree—although Ragnar really only had two wives (in the show, at least) and was rarely portrayed as a philanderer the way Bjorn is.

Ubbe is the best brother, and we need much more of him. He’s the most like Ragnar, though less crazy and selfish and certainly less ambitious.

Hvitserk is the saddest brother and he’s in rough shape at this point. He keeps seeing visions of his dead woman, Margrethe, who Ivar murdered. He drinks like he’s about to run out, like the world’s about to run out. Hvitserk’s PTSD is real and disturbing, but the way he gulps down his drink is . . . perhaps a bit maudlin, a bit over-the-top.

He tells Gunnhild that he sees Ivar everywhere, waiting for him. Ghosts. He’s haunted and pale and a complete wreck and he either needs someone to slap him very hard or he needs some therapy post-haste. 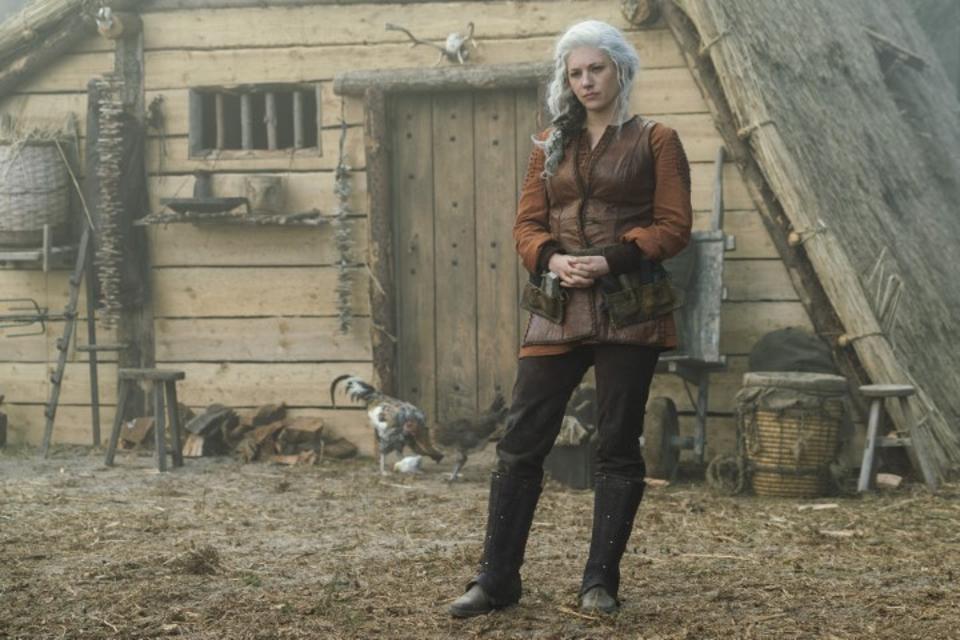 Elsewhere, Ubbe and Torvi leave their children with Lagertha so they can go rule Kattegat in Bjorn’s absence and then go off to Iceland to find Floki.

Ubbe takes the throne, as steward, and almost immediately proves that he would make a great king, almost certainly better than Ragnar, Bjorn or Ivar.

He decides to send Hvitserk on a trading mission along the Silk Road, perhaps as far as China. “Together, we will make Kattegat one of the greatest cities in the world,” he tells the gathered people. Hvitserk isn’t there for the speech. He’s in a paranoid stupor and badly, desperately needs help. At this point he’s basically gone completely mad. 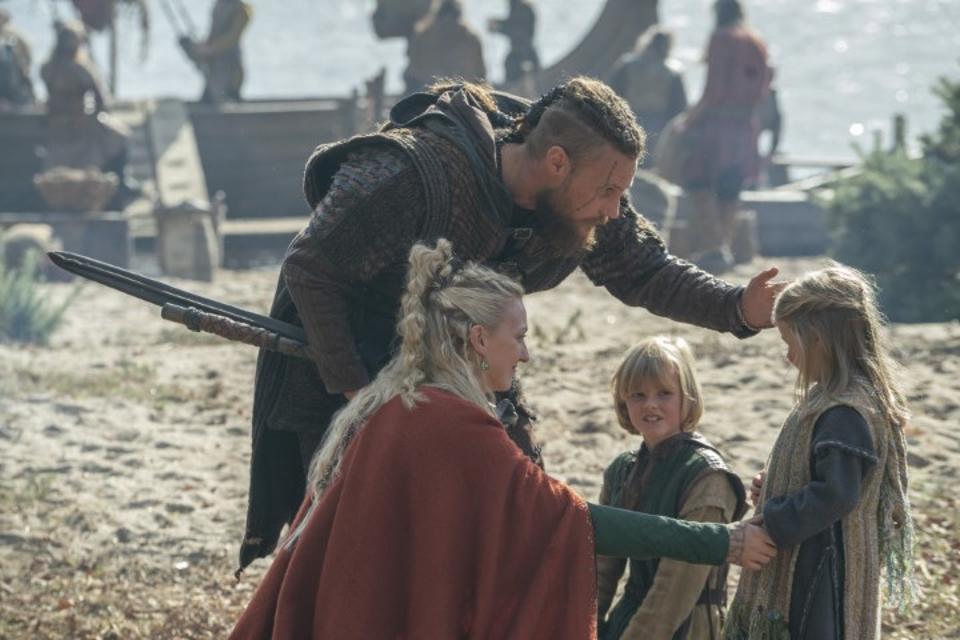 Live By The Sword

Meanwhile, back on Lagertha’s farm she tends to her grandchildren.

She tells them a story of the Norse god Heimdallr, and we realize that as she speaks, assassins are making their way to her door. But it isn’t her door, we discover. It’s one of the women who came to visit her earlier seeking her help. The men we see weren’t assassins coming for Lagertha, they were raiders who came to prey on the week—raping, pillaging, and murdering.

So Lagertha, quite quickly, decides to go back on her promise of peace. The shield maiden returns, ice in her eyes and steel in her voice.

She unburies the sword she so solemnly set in the earth last week. More time has passed in the show, of course, and she seems to have created a pleasant, peaceful life for herself in the interim. But here we are once again, violence everywhere. Unavoidable.

I’m okay with this. Lagertha wasn’t born for peace or stability. Hers is a life of blood and steel. 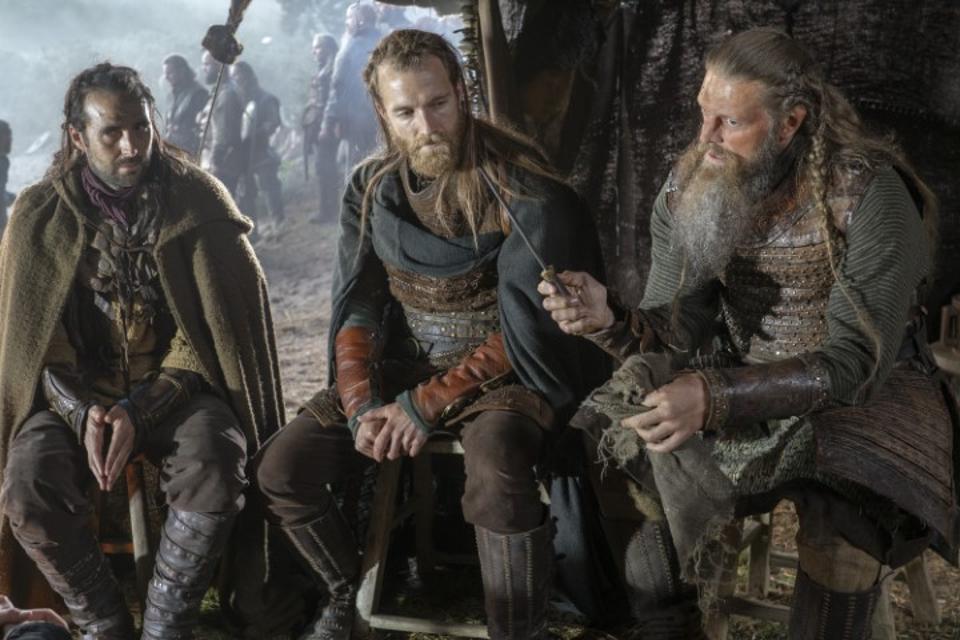 The Battle Of Blackwater

Bjorn shows up to rescue Harald, he and his troops swimming in toward Olaf’s shore at night. They assume they’re unseen, but Olaf—mad, but not at all stupid—has outwitted them.

He’s placed oil on the water, and sets it aflame as they approach. They try to retreat, but the archers set another barrier of flame.

It’s quite the dramatic scene, though I wonder how Olaf knew they were coming, and how he knew they’d come at night, and how he managed to create such perfect lines of fire on the ocean. I suppose I should let it go—simply embrace the magic of it all. But it is an unlikely defense without any explanation or intelligence.

It reminds me of Tyrion’s defense of King’s Landing when Stannis Baratheon attacked in the Battle of the Blackwater in Game Of Thrones. But Tyrion knew that Stannis would attack from the sea and planned accordingly. I suppose perhaps Olaf did as well, we just weren’t privy to any of the strategy. 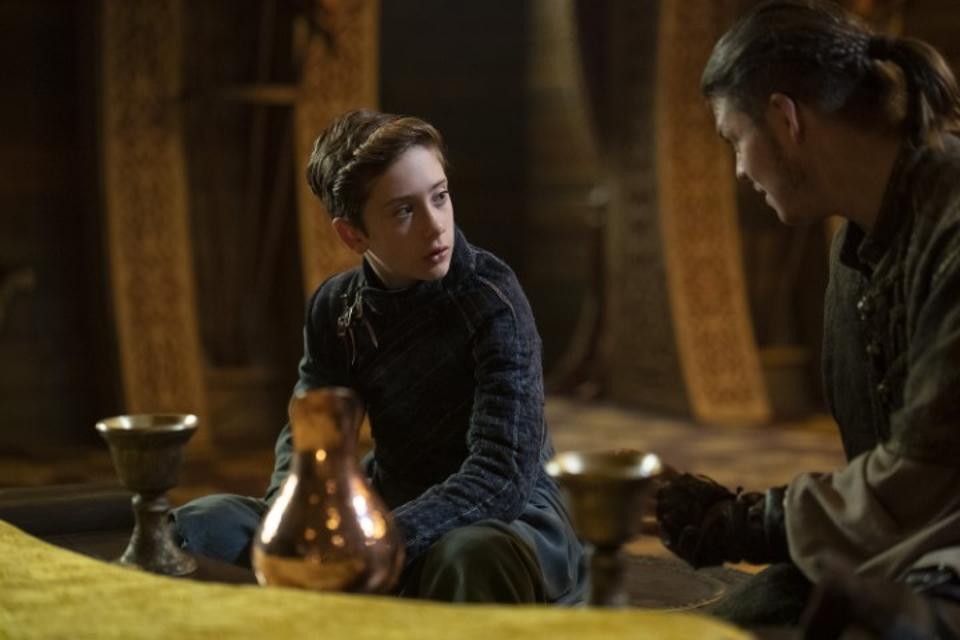 Ivar, Oleg and Igor Walk Into A Bar

Ivar and Prince Oleg (Danila Kozlovsky) continue their journey. Oleg wants to deal with his brother—vengeance for crossing him, for having the audacity to challenge and threaten him. They take him unawares during a celebration, riders emerging in slow motion to slaughter the merrymakers.

His brother begs for his life, tells him that he promised their father he would watch after him. But Oleg isn’t swayed. He brings him to a torture chamber. Oleg wants him to swear to Odin, but his brother refuses. Hot irons ensue.

Ivar and Igor’s budding friendship is strangely cute. Ivar teaches him his language. Igor pretends to be a cripple. Then they hear a dog barking endlessly and go to investigate.

They find Igor’s uncle, left in a cage, a chain through his cheek and mouth, grotesque and pathetic. Igor laughs at him. Ivar laughs, too, and then looks . . . troubled. Perhaps he’s out of his depth. Perhaps he’s looking into a mirror at last and doesn’t quite like what he sees.

Whatever it is, I like it. Ivar has been a one-note bastard for too long. Since he was a murderous child. Now, at last, perhaps he’s becoming a human, a character we can relate to and sympathize with. Maybe. I’m not sure. 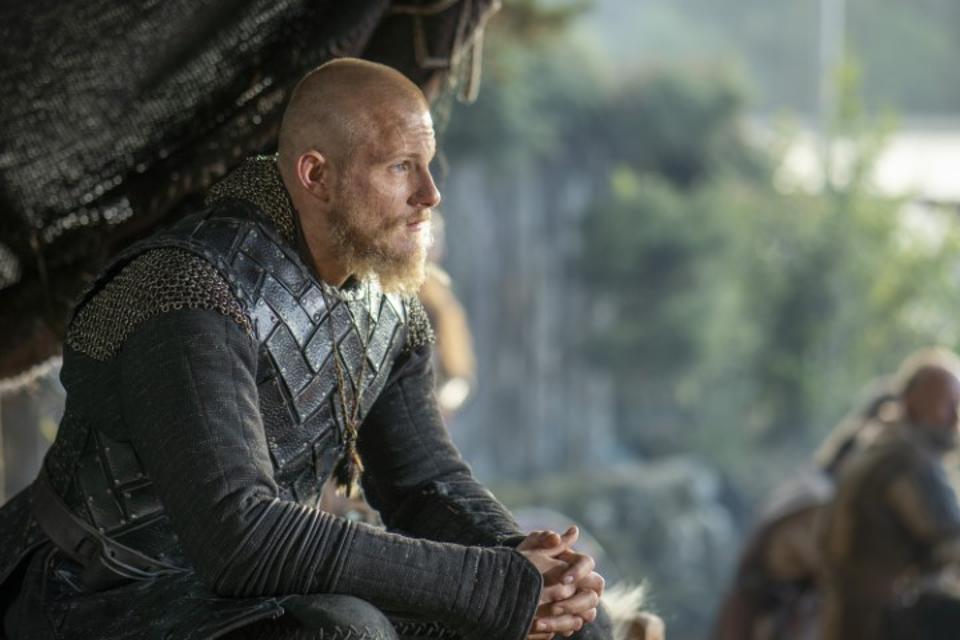 Once again, I’m just happy that this show is good again. It isn’t its best. It lacks, perhaps more than just Ragnar himself, a true focal point. Ragnar gave us that lodestone, that thing to focus on, which everything else revolved around. He wasn’t a hero, but he was a clear central protagonist we could follow. Around Ragnar’s orbit circled Floki and Athelstan and Rollo and Ecbert.

There are no orbits in Vikings now and too many stars. It’s far, far better than it was last season and much of the season before, but it’s still hard to know what exactly we’re supposed to follow. Ragnar made his name as a navigator, teaching his people how to sail in new directions, over far seas. Like them, we followed him to England and through all those trials and tribulations and battles and mistakes.

Vikings has become feckless without that anchor, and no matter how much it improves over last season, I’m not sure it will ever have the same focus it once had, and so we drift.

What To Expect From Alphabet’s Fourth Quarter Results