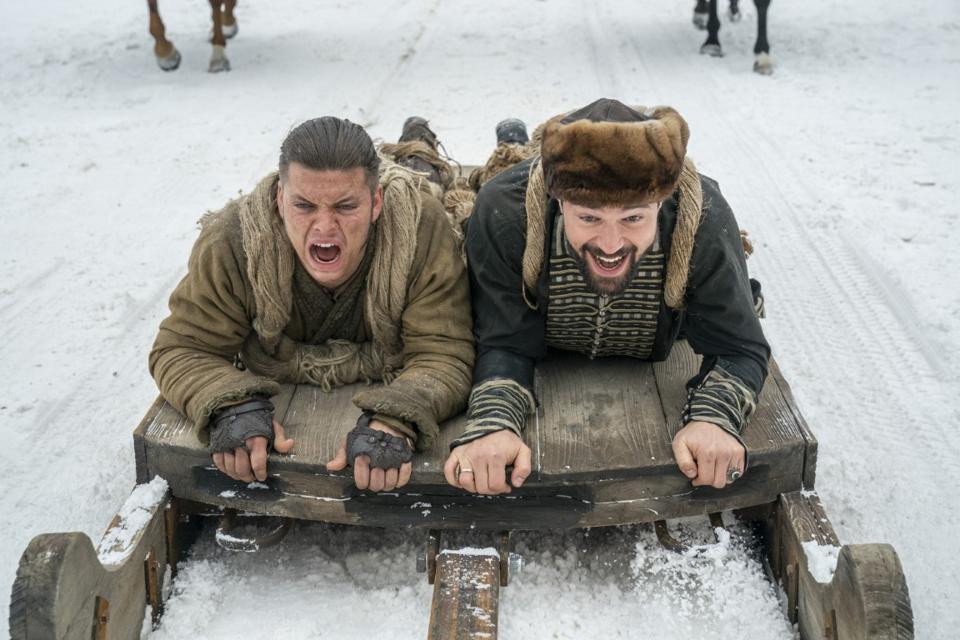 ‘Vikings’ starts off with a strong Season 6 premiere, but it’s still missing some of the things that … [+] once made it great.

Vikings has returned with a two-hour / two-episode Season 6 premiere. ‘New Beginnings’ and ‘The Prophet’ are the first two episodes of the season, and come together as one long premiere, setting the stage for what is bound to be yet another bloody season.

I’m happy to report that the quality in Season 6 is vastly improved over Season 5—so far, at least. I very nearly gave up on this show. Last season was . . . not good. Very bad, actually, with a confusing narrative, poorly choreographed battles and a serious Ivar the Boneless infatuation.

The Season 6 premiere shows a marked improvement, though it still suffers from one glaring omission: Ragnar Lothbrok is still very much dead, still very much not part of the show, though his memory lingers. Lagertha sees him and her children as she seeks out her new farmstead—a memory of better, simpler times. For us in the audience, it’s a memory of one of the most compelling characters in modern TV, and it’s every bit as bittersweet.

The stage is set thusly: Ivar has fled Norway and Kattegat. He’s exploring the wide world, making his way down the Silk Road through exotic lands. We open to our crippled ex-king looking quite snazzy with long hair and a beard. Alas, he shaves it all away only minutes later. I prefer Ivar bearded and swarthy. Oh well.

His band of mercenaries is set upon by Rus vikings and he’s whisked off to Kiev where he meets the charming psychopath, Prince Oleg (Danila Kozlovsky) one of many brothers vying for power in what is now the Ukraine. 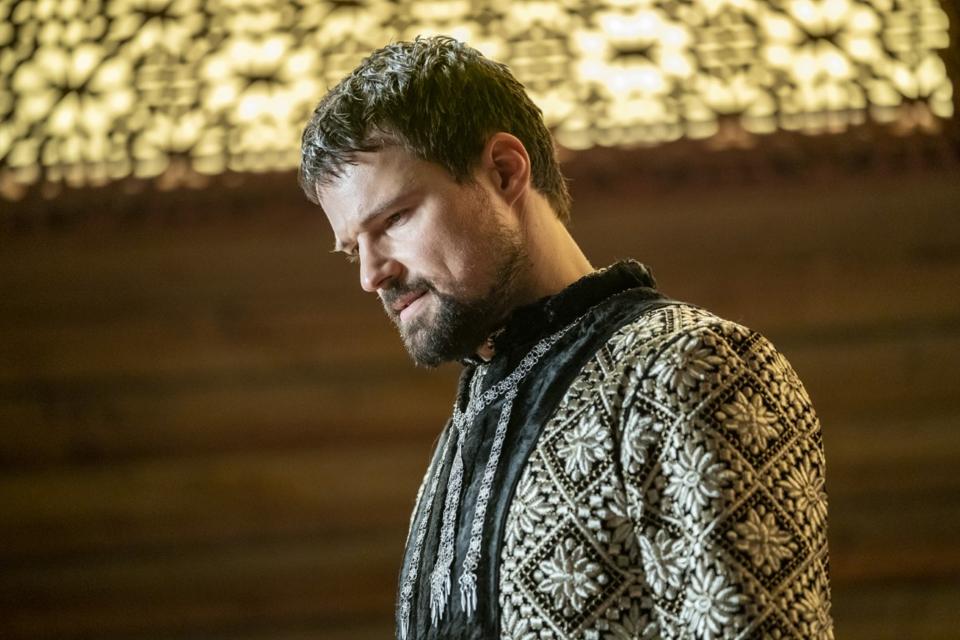 Prince Oleg is a charismatic bastard. He doesn’t believe that Ivar is actually a king, so he tortures his one remaining viking companion. Tortures him and then has his arms ripped off in a spray of blood, which seems to at once bother Ivar and, perhaps, fascinate him. Ivar is drawn to the crazy and cruel, and he’s certainly drawn to Oleg.

The next thing we know, Ivar and Oleg are being dragged behind horses on a makeshift sled, strapped with ropes to what appears to be some kind of hot air balloon. They go flying together and have a nice bonding moment, chatting about Ivar being a god. When they land, they burst into laughter. Truly, a friendship that was meant to be.

Oleg tells Ivar he will raise an army and help him take back Kattegat. He just has some family business to attend to.

So they travel to his brother’s keep where Oleg’s ward, Igor (Oran Glynn O’Donovan) lives. Igor is the true heir to the Rus throne, and a boy of about twelve. He’s Oleg’s nephew—the son of his brother-in-law. Oleg wants to collect him from his brother so that he can control the succession. He does so by poisoning and murdering his brother. It’s quite a scene. Oleg dances a Russian jig while his brother spits blood and collapses. Then he takes the boy.

Oleg is known as “The Prophet” because he once avoided being poisoned himself through a premonition. When his other brother comes to arrest him—unless he handsover Igor unharmed—Oleg tells him that unless he allows them to leave unscathed, something terrible will happen to him. His brother calls his bluff and asks him to tell him the name of his new wife who he wed in secret in order to prove that he is truly a prophet. 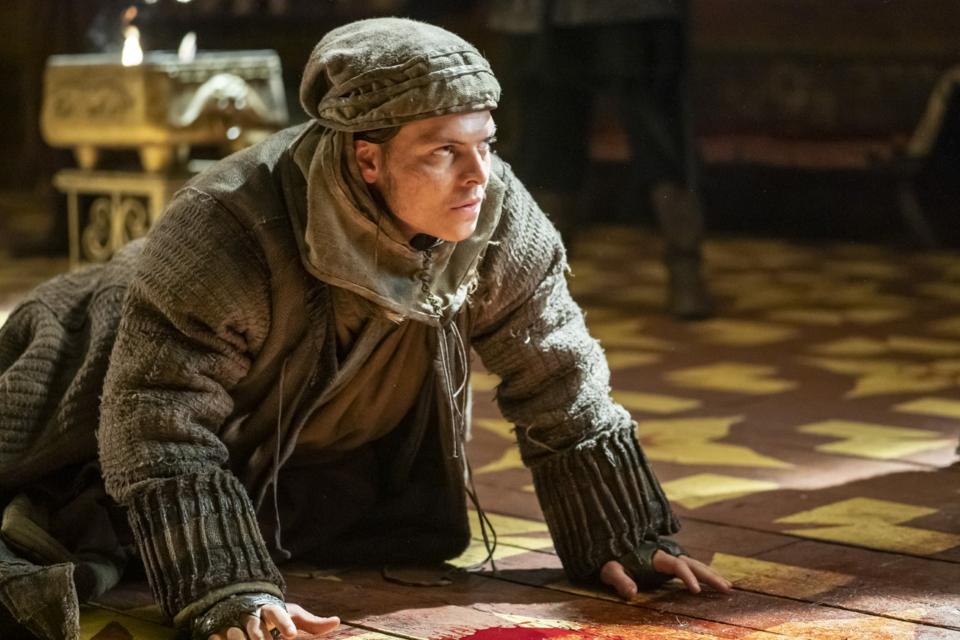 Oleg is ready for it and not only tells him her name, but also reveals that he has taken the poor young woman captive. Ivar gets a good laugh out of all of this. Truly, a friendship that only bitter betrayal and psychopathic greed will be able to undo.

That’s a very brief rundown of what happened with Ivar’s story in the Season 6 premiere. I liked it quite a bit mostly because Ivar is toned down so much. He’s still the Ivar we know and . . . hate . . . but he’s also different. We see him surprised and dismayed more than once.

He comes to the boy’s defense and even spends time with the kid doing magic tricks and making him laugh, and listening fondly as the boy plays music. It’s a more human side to Ivar, and it’s very welcome. Ivar as invincible villain is pretty boring. Ivar as exiled king and cripple and jester and even a little kind . . . well that’s a much better character as far as I’m concerned. 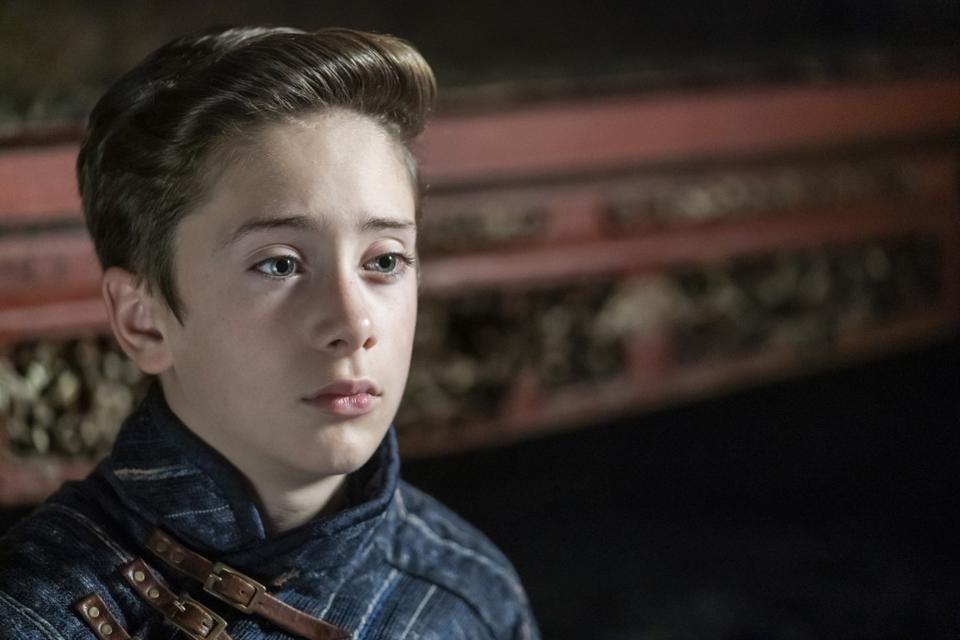 Meanwhile, Oleg is a pretty interesting new addition to the cast. He’s charming and menacing and ambitious and cruel. Very much like Ivar, though I think his cruelty is less wild and more purposeful. I’m definitely curious to see where this all goes and to see how the Rus factor into all the various political machinations of Season 6.

Speaking of the Rus, it’s pretty great to have such a new flavor and setting for this show. We’re in Russian territory now. The vikings settled the region and conquered its people, eventually converting to Christianity much like the Normans. I’m very much enjoying this eastern take on the viking people and the move away from England and Paris. 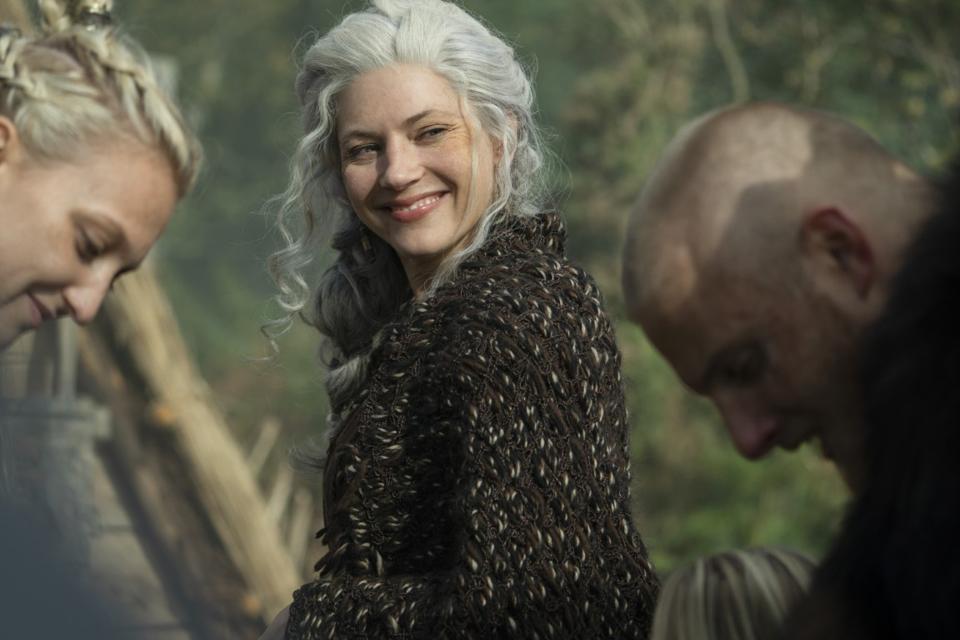 The rest of the episode focuses on Kattegat and its new king, Bjorn Ironsides. Peace has come to Ragnar’s old home at last, but it’s a restless kind of peace.

The remaining brothers live in a precarious harmony. Bjorn is king, and he genuinely wants to do the right thing and be a different kind. Different from Ivar, but I think different from his feckless father as well. His wandering eyes haven’t changed much, however. There is always a new female conquest on the horizon for Bjorn. Like his father, monogamy is not his strong suite. His wife’s servant, Ingrid, is the new object of his desire. No doubt in an episode or two they’ll do the deed. Bjorn might make for a good king, but a good husband is another question entirely—let alone a good father.

Point in case: Ubbe and Torvi seem happy, raising Bjorn’s children together. They take Lagertha off to find a plot of land she can cultivate. She’s done with the ways of the warrior (for now) and wants to raise livestock and live in peace. It’s a nice dream almost guaranteed to be shattered.

Her visions of her past life, as they sail their way to her new one, are quite moving. For those of us who’ve stuck it out this long, seeing Ragnar is always a bit painful. The show has moved on and it will never really be the same. Even a season premiere that’s far better than most of Season 5 (and much of Season 4) still lacks that essential ingredient. And not just Ivar, but Rollo also. That was the first story of brothers at odds and, so far at least, I’ve never felt quite as drawn to this new batch of squabbling brothers. 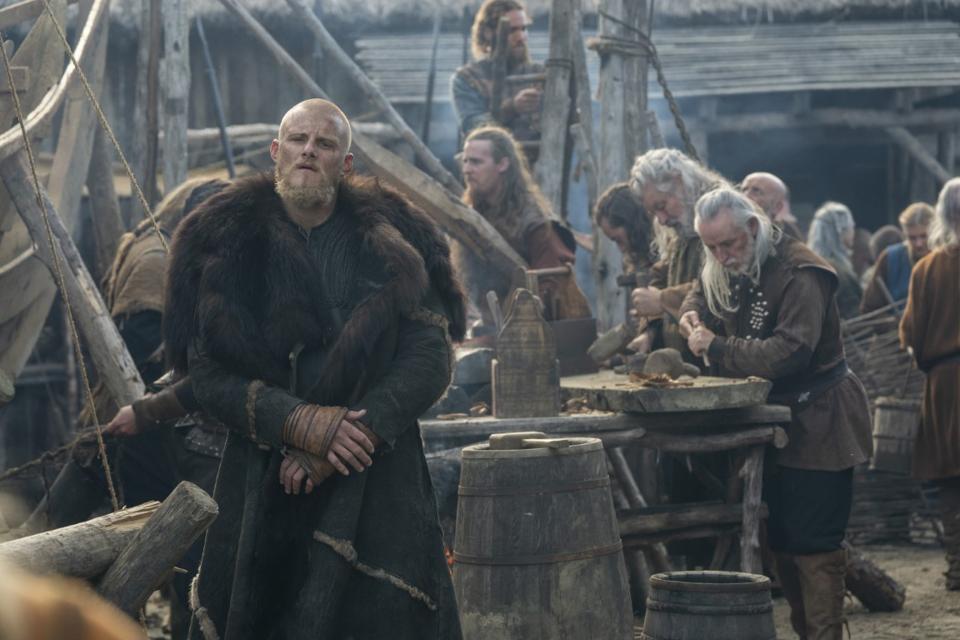 So Lagertha finds her plot of land and Ubbe and Torvi offer to help turn it into her dream farm. She will need some livestock, she informs them. She buries her sword in the ground and pledges never to fight again. We know it’s a lie.

Hvitserk isn’t doing as well as Bjorn and Ubbe. He’s a drunk and—dare I say it—by the end of the premiere almost over-plays the traumatized drunkard. The performance starts strong and ends maudlin. Oh well. The point is, Hvitserk chose to be Ivar’s lackey and it cost him dearly. Now his sanity is paying the price.

Others of Ivar’s former allies have also suffered. King Harald is now captive to King Olaf and has sent word to Bjorn to come to his aid, something Bjorn struggles with throughout the episode, going so far as to talk it out with the ghost of the Seer about his kingly troubles. 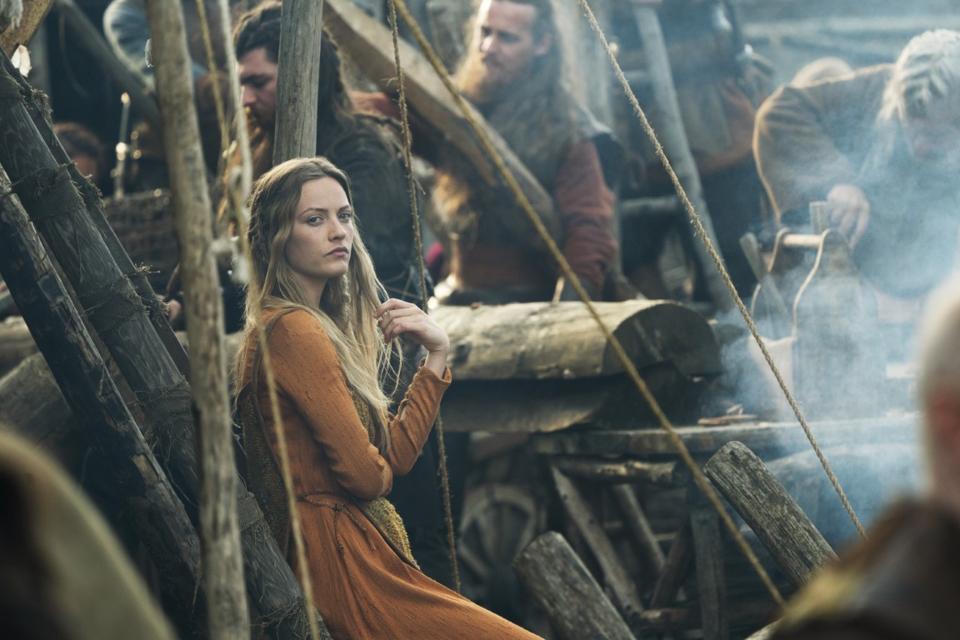 Yeah, Bjorn is definitely going to hit that.

In the end, he decides to help Harald. He owes him that much for fighting alongside him and saving his life. Ubbe and Torvi had planned to go search for Floki in Iceland, but Bjorn convinces them to stay and look after Kattegat while he’s away. Hvitserk is too damaged to be left in charge.

We learn of Floki’s disappearance from Kjetill who has returned to drum up new settlers for the Iceland project. He convinces Ubbe to return with him, though in the end we learn that Kjetill himself will not be sailing, either. Bjorn is suspicious of his story and essentially presses him into service for his new war against Olaf.

And so we have the table set. Oleg and Ivar will muster an army and sail to Kattegat to rape and plunder. Bjorn will absolutely not be faithful to his wife. Hvitserk will stir up trouble thanks to his PTSD. Ubbe will continue to be the only one of Ragnar’s sons who is decent in pretty much every way. Lagertha will play farmer until that’s no longer an option.

My question is whether Floki will return or if his fate was sealed in that cave last season? I’m also curious to see what happens to Harald Finehair, one of the show’s best remaining characters.

And will we return to England? It seems like we must given the importance of the viking conquest of that island. If not, at least we have The Last Kingdom. 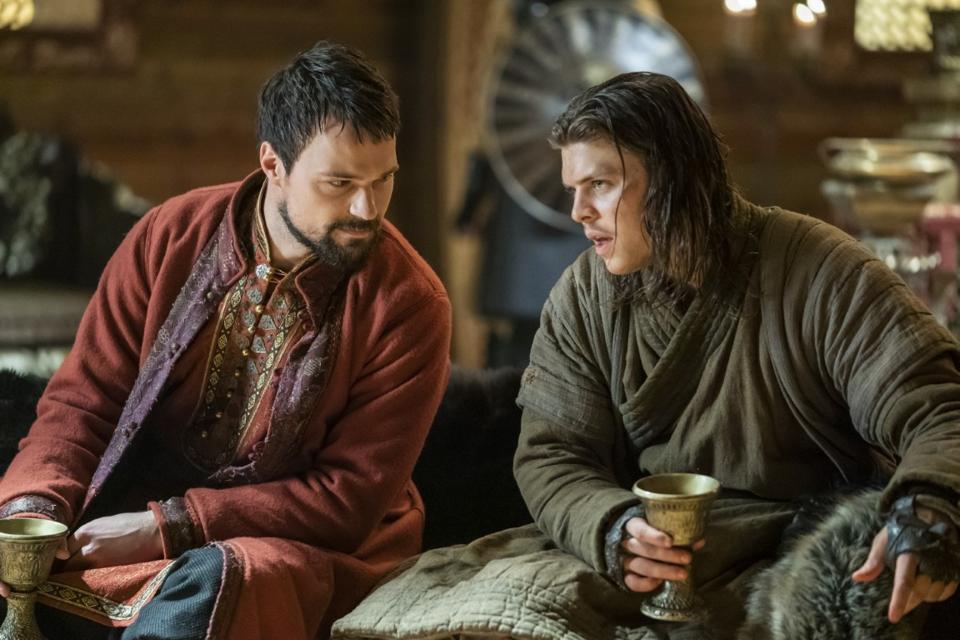 All told, a strong return for Vikings, blessedly absent of all the preposterous nonsense that made last season so unbearable. On the other hand, it was largely setup for a conflict that I think has already worn out its welcome.

I hope that Season 6 is not just another clash of brothers. I hope it’s not just Bjorn and Ubbe and Hvitserk pitted once again against Ivar, all Ragnar’s sons snarling over the leftovers of a good story. That has been done to death already. I hope we get something new, though I know from the trailer that the Rus will indeed attack.

I enjoyed the introduction of the Rus and Ivar’s newfound humanity. I hope that something comes of his and the boy, Igor’s, relationship. Oleg is a great new villain, and there’s room for both friendship and conflict between him and Ivar. 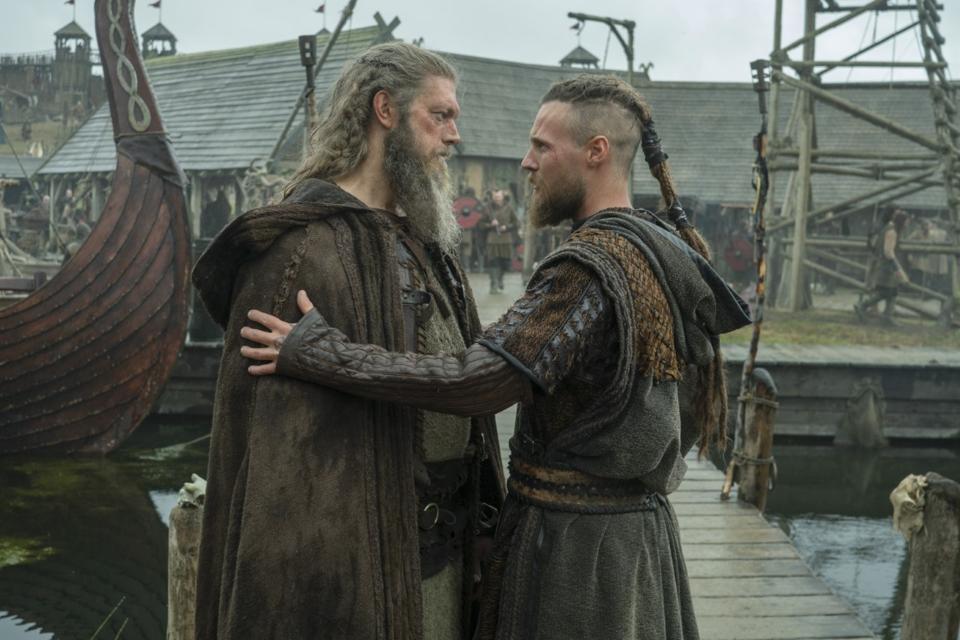 Uh, yeah, Floki just kind of wandered off and that sounds suspicious but it’s actually true.

Nothing too exciting happened tonight, and yet I found myself happily immersed in the opening two hours of Vikings’ sixth season. I genuinely want this final season to be great, though I am also quite certain it will never be as great as Ragnar and King Ecbert having one of their talks, or the good old days when Athelstan and Floki vied for Ragnar’s attention and faith.

I also thought the end of the premiere was quite sudden and . . . anticlimactic? Bjorn confronting Kjetill is hardly the most interesting way to end an episode, let alone a season premiere. Oh well.

P.S. I’m also reviewing some other shows. Right now I’m writing weekly recap/reviews of The Mandalorian and I recently wrote a review of the third season of The Dragon Prince which you can read here.

And next up on my review slate is The Witcher on Netflix. I can’t wait.

Review of “More from Less,” by Andrew McAfee