Home Technology ‘Warcraft 3: Reforged’ Has A Record Low 0.8 Score On Metacritic As Fans Are Furious
Technology

‘Warcraft 3: Reforged’ Has A Record Low 0.8 Score On Metacritic As Fans Are Furious 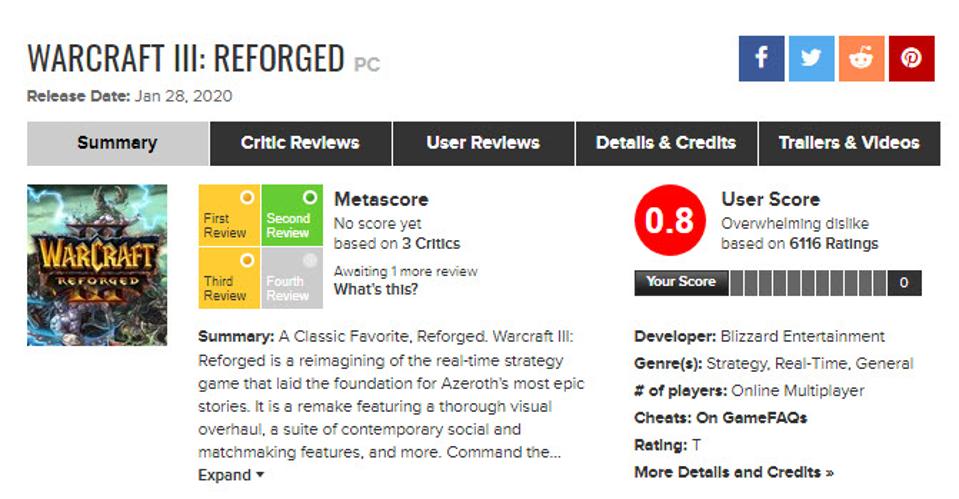 Blizzard is not exactly a developer looking for any more bad news after the last couple of underwhelming years, and yet they have blundered into what could be one of their biggest controversies yet, the rather horrendous release of Warcraft 3: Reforged.

Fans were previously looking forward to a remastered, upgraded version of Warcraft 3 back when the idea was announced. WoW Classic went pretty well, and everyone thought that WC3 with some improvements to bring it into the modern era sounded like a slam dunk.

Instead it’s more like Blizzard tried to throw a buzzer-beater from their own foul line and hit a small child in the stands.

The ways Warcraft 3: Reforged has disappointed players have been numerous and in some cases, bizarre. There are missing cutscenes that were promised and used as a core part of the game’s marketing. The game is buggy, crashes frequently and somehow has actually made the UI worse from the original. Reforged has actually stripped away features from the original game somehow as well, and this list is probably only half the issues fans have with release. In short, it’s a disaster.

And it very well might be a record-setting disaster, at that.

Warcraft 3: Reforged does not have a critic score on Metacritic at the time of this writing, but fans have been busy writing their own user reviews on the site. The result? After 6,100+ reviews, Warcraft 3: Reforged is currently sitting at a 0.8/10, a score so low I’m not sure it’s been achieved with that many votes before, if ever.

If you pay attention to online game criticism and fan and critic scores, you know the old “most games are between a 7-10 rule” where anything that’s a 5 and below is flat out broken. But below a 1/10? It’s almost impossible. Look at a game like Anthem, which was considered to be one of the most disappointing “big” releases of 2019. That had a 54 on Metacritic on PS4, and a 3.4 user score. Very bad. Still not anywhere near what we’re seeing with Warcraft 3: Reforged.

But you can go deeper. I looked up some of the most poorly reviewed games in Metacritic history like Big Rigs: Over the Road Racing (8 Metascore) and Ride to Hell: Retribution (16 Metascore). Their user scores? Still a 3.9 and 1.3 respectively. Reforged is lower.

Now, obviously this is (justified) a bombing campaign where as many people as humanly possible are giving Reforged a zero in order to make their voices heard about the state of the game. For as many problems as it has, it is not literally the worst game in history. And yet it says something that this many fans are this riled to deliver the game an all-time low user score like this. And this isn’t your usual “X game gets bombed because of some political drama” thing, it’s “this game is so broken and bad and should never have been released that everyone wants refunds.” That’s…a whole new level.

I’ve been searching, but I have not seen an official statement from Blizzard yet on the whole Reforged disaster, but no doubt one has to be coming soon as they figure out what to do. I haven’t seen pushback this severe since Halo: The Master Chief Collection pretty much flat-out didn’t get its multiplayer to work properly for months, though eventually those issues were fixed (and the game has a 7.5 user score these days as a result).

I don’t know what Blizzard is going to do here, but it seems likely something drastic is in order whether that’s mass refunds or the announcement of a grand fix for all the listed issues, though you probably can’t wish four hours of pristine missing cutscenes into existence. What on earth happened here?

On The One-Year Anniversary Of The Kristaps Porzingis Trade, Can Either Team Be Declared A Winner?

We All Learned Physics’ Biggest Myth: That Projectiles...