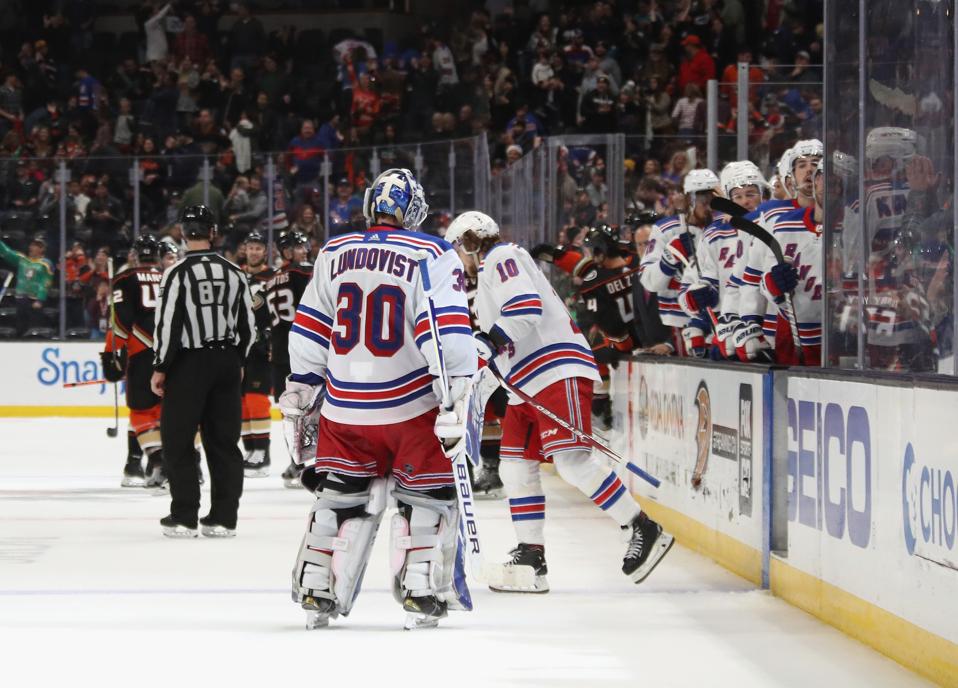 ANAHEIM, CALIFORNIA – DECEMBER 14: Henrik Lundqvist #30 of the New York Rangers leaves the ice … [+] following a 4-3 shoot-out loss to the Anaheim Ducks at the Honda Center on December 14, 2019 in Anaheim, California. (Photo by Bruce Bennett/Getty Images)

From the moment Henrik Lundqvist arrived in 2005, he’s been the New York Rangers’ brightest star.

Between his Hall of Fame resume and Hollywood looks, Lundqvist has reached Jeter-esque levels of popularity during his 15-year tenure in the Big Apple, which is no revelation. Any New Yorker can attest to this. So much so that inside the closet of any Rangers fan, chances are there’s a No. 30 sweater hanging.

In the last decade, no Rangers jersey has flown off the shelves more consistently than Lundqvist’s. From 2010 to 2018, he’s been a mainstay on the NHL’s best-selling jerseys list, peaking as high as third overall and as low as 13th.

But last year, something changed. Fans weren’t buying Lundqvist’s jersey as much as they used to. After the 2018-19 season, the NHL’s list of best-selling jerseys no longer included New York’s netminder, which raises a scary question. Has the twilight of Lundqvist’s career negatively affected his popularity?

The short answer is no. Lundqvist’s superb career in net, all with the Rangers, has him in line to have his sweater retired by the team. Just as Mike Richter, the last great goalie to call MSG home, Lundqvist should be revered for generations to come.

But in 2019, the once-great goalie is merely a shell of himself. While anyone who’s followed the Rangers through Lundqvist’s career can conjure the image of his incredible 2014 Stanley Cup playoff performance, both new and young fans only see the player before them today – a platoon goalie with a 3.13 goals-against average, more than half a point higher than his career mark.

The takeaway is that No. 30 as a product has lost its shine. It’s possible fans prefer the star power of Artemi Panarin’s No. 10 or the promise of Kaapo Kakko’s No. 24. Still, as the franchise player of an Original Six club in America’s most prominent media market, Lundqvist’s omission means his star is fading.

Part of what’s working against Lundqvist is his decreased workload. He can’t get going without the proper ice time. The NHL is trending toward a more equitable split of playing time between starting and backup goalies and with gifted understudy Alexandar Georgiev, expecting an almost 40-year-old Lundqvist to start 60 games in a season is unreasonable.

However, Lundqvist has made a career of being effective in back-to-back games, a rarity when analytics show goalies perform at a lower level when playing on consecutive nights. In 85 career starts on the second leg of a back-to-back, Lundqvist possesses a 54-23-8 record and a .928 save percentage according to NYR Stats & Info on Twitter. Also, he holds a career 2.12 goals-against average in those games. This season, Lundqvist started one back-to-back, won both games and posted a .964 save percentage.

At 37 years old, Lundqvist has no plans to retire anytime soon and would be foolish to considering the $12.5 million owed to him according to CapFriendly.com. He’s intent on being a part of the Rangers future, one that includes Panarin and Kakko, beyond the remaining two years on his contract.

The absence of Lundqvist on the NHL’s top-selling jersey list is an objective sign of decreased popularity, but there are other factors to consider. New York is not one of the six teams participating in the three NHL outdoor games this season. For each event, the Heritage Classic, Winter Classic and Stadium Series, the league releases special edition jerseys. Those usually provide a bump in sales for the teams involved.

Also, the Rangers are in the midst of a rebuild. Two seasons ago, New York snapped a streak of seven consecutive playoff appearances and started a new one with back-to-back misses. The early returns of 2019-20 show the Rangers as a potential fringe playoff team, but that’s a better case scenario. It’s hard for a star goalie to shine on a mediocre team. It’s harder when that star goalie is approaching 40 and lacks defensive talent in front of him.

Outside of his team’s talent level, Lundqvist’s continued decline threatens to destroy the goodwill he’s amassed during his career. What will Rangers fans end up remembering — the talented, all-world goaltender or aging player who didn’t know when to hang it up?

He shined in net for Sweden en route to a gold medal at the 2006 Winter Olympics in Turin. He earned the Vezina Trophy in 2012 as the NHL’s best goaltender. He brought the Prince of Wales Trophy and a chance to play for the Stanley Cup back to Madison Square Garden in 2014, New York’s first trip to hockey’s highest stage in 20 years.

If Lundqvist were to put together an impressive set of games and recapture his brilliance consistently, maybe fans would eagerly return to purchasing his sweater. For now, the message is clear – No. 30 lacks the luster of his past.

Passing The Torch … Or Should I Say The Flashlight App?

Oakland Fans To Raiders: Thanks For Nothing, Baby

Transcript of How Meditation Can Change Your Life...

Robots May Be Drawing Your Blood In The...

Q&A: Robbie Robertson On ‘Once Were Brothers’ Documentary

Her Kitchen Is Closed But Chef Anne Ferril...