Home Business What Do We Know About The Cavaliers A Quarter Into The Season?
Business

What Do We Know About The Cavaliers A Quarter Into The Season? 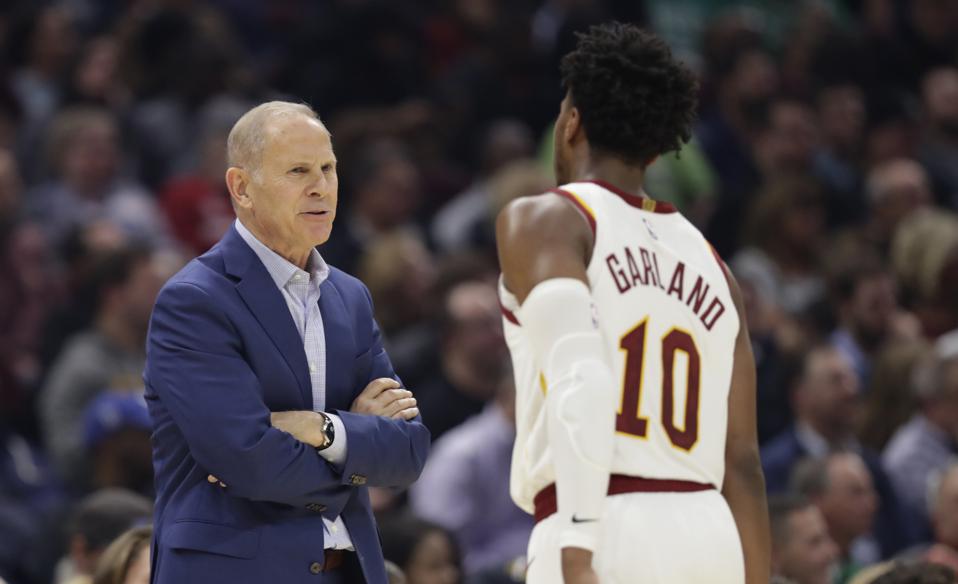 At halftime on Friday in their home contest against the Orlando Magic, the Cleveland Cavaliers have officially completed the first quarter of their 2019-20 campaign. The Cavaliers are down 52-47 to the Magic and it’s been a hard-fought game between both sides. It’s also been a microcosm of their season up to this point, so it’s fitting at one fourth in, Cleveland has remained consistent.

Heading into the season, there were plenty of unknowns about this Cavaliers squad. How would John Beilein, a 66-year-old rookie head coach, adapt to the NBA game and control a locker room full of grown men and teenagers? How will Darius Garland, Dylan Windler and Kevin Porter Jr., three rookies Cleveland drafted over the summer, look? What does Kevin Love’s future look like with a Cavaliers organization amid a rebuild? Well, some answers to those burning questions are starting to become available as the season continues along.

The early beginnings of the John Beilein era

When Beilein was first hired by Cleveland to be the team’s twenty-first head coach in franchise history, a popular buzzword surrounding the hire was culture. After four years of contending with LeBron James at the helm, Cleveland looked lost last season under both Tyronn Lue and Larry Drew. As the team was beginning to rebuild, they needed someone to guide them and Beilein seemed like the perfect man for the job.

Throughout his coaching career, Beilein has always been successful. Before coming to Cleveland, he had been at Michigan for 12 seasons, guiding the Wolverines to the NCAA Tournament nine times in that span. He was 799-461 in 39 seasons as a college coach and 278-150 at Michigan. Beilein also has established a reputation as a guru for player development, producing multiple first-round picks and was expected to do the same with a Cavaliers squad flush with young talent.

So far, the kids appear to be alright under Beilein’s tutelage but that hasn’t exactly translated to success in the win column. After their aforementioned game against Orlando, Cleveland currently sits at 5-16 overall and in thirteenth place in the Eastern Conference. Unfortunately, there aren’t many silver linings for both Beilein and the Cavaliers. Per NBA.com, the Cavaliers currently rank twenty-sixth overall in offensive rating of 104.6. Defensively, it’s not much better as Cleveland ranks twenty-fifth overall with a rating of 113.4.

This is to be expected though as Cleveland is a team going through a rebuild and trying to establish an identity for itself. Some of the younger players have looked promising under Beilein, with sophomore guard Collin Sexton even leading the team in scoring at 18.0 points per game. Beilein brought a lot of his methods to Cleveland that brought him success at the collegiate level and so far, it is producing results. But, it also has rubbed some players in Cleveland’s locker room the wrong way.

Before Friday’s matchup against the Magic, The Athletic’s Shams Charania and Joe Vardon dropped a bombshell on Beilein and the Cavaliers. Anonymous players shared that they find some of Beilein’s methods grating and were starting to look past Beilein to his lead assistant, J.B. Bickerstaff, per the report. Veterans and some younger players, are frustrated with what they see as the pitfalls of a college teaching methods Beilein brought with him to Cleveland.

Despite this, Beilein remains undeterred about what the remainder of the season holds for the Cavaliers with him at the helm.

“That’s part of the game and that’s part of coaching,” said Beilein before Cleveland’s home game against Orlando. “No, it’s not frustrating – it’s what I signed up for. It’s passionate, so I understand all that. But our job is what is the best way to improve this team so that we can continue to grow and it sets a foundation for the future.”

In all honesty, this was the perfect response to give in the wake of a devastating article. The veterans that have a problem with his tactics probably won’t be here after the annual NBA trade deadline and Beilein just has to continue the course towards building the future of Cavaliers basketball. This year may not show it record-wise, but Cleveland is still in a good place going forward for Beilein at the helm.

Early promising signs from some of Cleveland’s rookie trio

As mentioned before, the Cavaliers added three rookies to their roster this summer through the 2019 NBA Draft. Of the three, Windler has been sidelined for all of Cleveland’s games with a stress reaction in his left leg. But, his debut will be coming soon as Windler was recently assigned to the Canton Charge, the Cavaliers’ G-League affiliate. Windler scored eight points and grabbed four rebounds in his limited season debut against the Rio Grande Valley Vipers.

Cleveland’s other two rookies, meanwhile, have shown promise since opening night. But, before we get started there is something to establish. The elephant in the room is Garland has largely struggled the first quarter of his rookie campaign. With averages of 10.8 points on 37.8% shooting to go with 1.5 rebounds and 3.0 assists per game, Garland has clearly looked a step behind. But, to be fair, this is the first time Garland has played serious competitive basketball since high school after missing the majority of his time at Vanderbilt. There’s still time for Garland to grow into the potential that had him drafted fifth-overall this summer, Cleveland fans just need to be patient with him. Given the nature of this town, though, that’s asking a lot.

To see the positives in Garland’s season so far, though, you have to look at the bigger picture. At times, Garland has looked composed and more like a seasoned veteran instead of a rookie. He looks comfortable acting as Cleveland’s primary initiator at times as well and actually leads the teams in assists. Garland’s three-point shot, something he was notorious for coming out college, is starting to fall as well. In his last ten games, Garland has connected on 44.4% of his three-point attempts which is a stark contrast to his season average of 25.0%. Again, people need to be patient with Garland going forward and be excited at what the future holds for him. 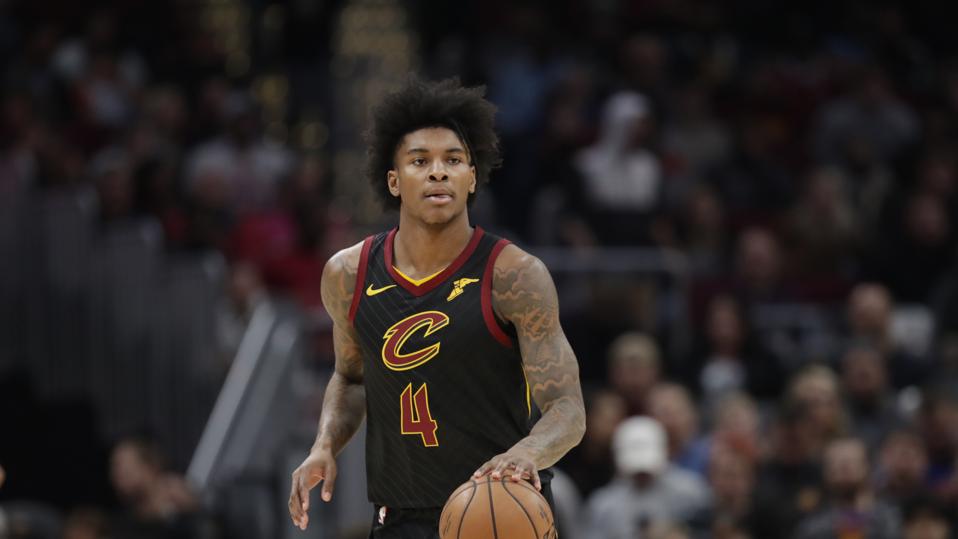 Cleveland Cavaliers’ Kevin Porter Jr. drives against the Milwaukee Bucks in the second half of an … [+] NBA basketball game, Friday, Nov. 29, 2019, in Cleveland. (AP Photo/Tony Dejak)

Porter, meanwhile, has been a revelation for the Cavaliers through this point of the season. The former USC Trojan fell to thirtieth-overall due to character concerns which look overblown with the benefit of hindsight. Porter has been nothing but a professional since coming to Cleveland and has shown flashes of why team general manager Koby Altman viewed him as a top-ten talent. After their loss to Orlando, Porter is averaging 6.6 points, 3.2 rebounds and 1.8 assists predominantly off the bench for the Cavaliers.

What has made Porter so great for Cleveland so far this season is that he just continues to grow every time he touches the floor. No one expected Porter to have such a natural ability as a playmaker, yet he continues to impress. His ability as a slasher was already well-known, but no one predicted it would already look as refined as it is. Porter continues to make the right, intelligent play whenever he touches the ball and kudos to Altman and his staff for being able to secure him so late in the first round.

When Windler makes his Cavaliers debut, fans will finally have a good idea of what the future of Cavaliers basketball will be like. Based upon initial returns with Garland and Porter, the future looks bright.

Kevin Love’s future in Cleveland and beyond

After signing a four-year, $120 million contract extension with the Cavaliers, many thought that Love would finish his NBA career in Cleveland. It would have been a nice ending to the All-Star’s career, he won his first championship and Cleveland’s first title in over 50 years. But, after how this upcoming free agency class is shaping up, Love entered into hypothetical trade discussions once again.

At first, it felt like nothing but a smokescreen by the media and the team was adamant that Love wasn’t available. But, there may be some fire behind all of this hypothetical smoke. According to multiple sources, Cleveland has now begun to listen to seriously listen to trade offers for their All-Star forward.

According to ESPN’s Adrian Wojnarowski, teams mentioned as possibly interested in acquiring Love include the Boston Celtics, the Portland Trail Blazers and the Denver Nuggets. The Miami Heat are also seriously interested in Love as well, per sources. The situation remains fluid but Cleveland is looking to net some combination of a young player as well and a first-round selection for Love.

The timing of Wojnarowski sharing teams interested in Love does put some public pressure on Cleveland’s front office. Thankfully, on December 15 nearly a third of the league becomes available on the trade market and can help make a trade for Love even more possible. More than anything, the Cavaliers need to do right by Love and send him to a title contender so that he can spend the remainder of his career in contention. With so many contenders interested in acquiring him, it seems like this is a reality.

Your New MacBook Pro Is Fighting Another Awkward Problem

How To Find Beta Testers For Your App Idea

BTS Earned The Only RIAA-Certified Korean Album And...

How To Watch Or Live Stream Bellator 241