What The Projections Say About The Oakland A’s Young Pitchers 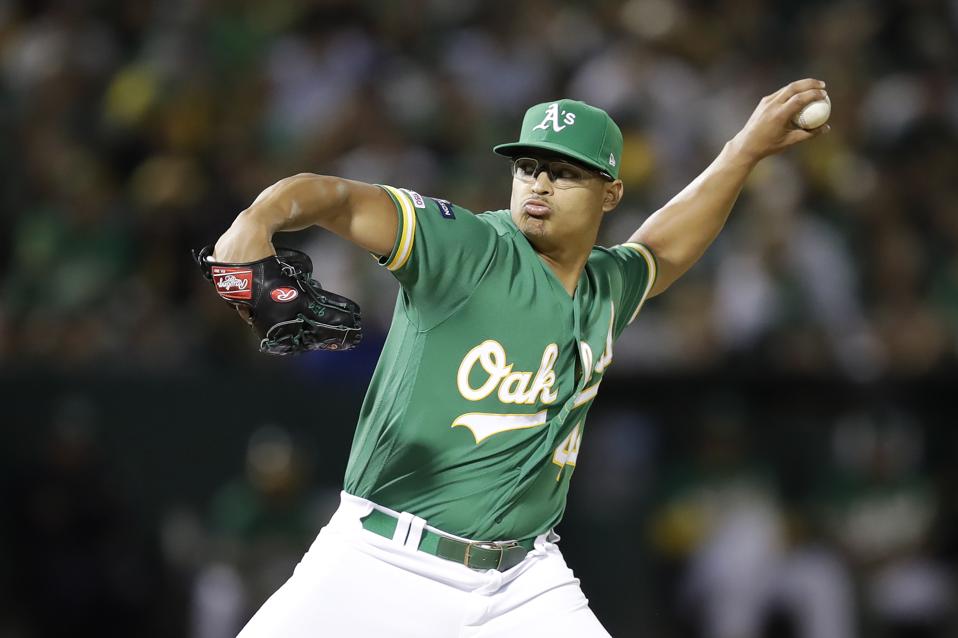 The Oakland A’s enter 2020 with a tantalizing, but largely unproven starting rotation. Frankie Montas was electric before getting hit with an 80-game suspension. Jesus Luzardo dazzled as a reliever, and A.J. Puk had flashes of brilliance. Those three are set to join Sean Manaea and Mike Fiers (with Chris Bassitt the most likely sixth starter) in what has the potential to be among the American League’s best starting rotations. Then again, we really don’t know what Luzardo and Puk will bring to the table, and Montas still needs to prove he can sustain his breakout performance (without the unauthorized help). Let’s see what the projection systems Steamer and ATC say about each one.

Both systems see Montas and Luzardo as the top two pitchers on the staff. Montas’ inclusion there makes enough sense, but it’s fair to wonder why a projection system would prefer someone like Luzardo, who has 12 major league innings under his belt, over Fiers and Manaea, who have been staff leaders the past two seasons (though Manaea missed the end of the 2018 and most of the 2019 season with Tommy John surgery). Part of the reason is that Fiers leverages his team’s park and defense in a way that projection systems don’t credit as a sustainable skill. Fiers, however, has shone he is among the best at inducing pop-ups (and the A’s have ample foul territory in which to track them down), and the elite infield defense vacuums up whatever comes its way. Neither of those facts is likely to change in the near term. He should handily beat his projected 4.91 ERA (averaged projection of the two systems).

Those same systems are wowed by Luzardo’s strikeout prowess. He spent his time in the minor leagues sending a procession of batters back from whence they came, and he’s likely to K over a batter per inning in the Major Leagues. Combine that with a roughly average walk rate, home run rate and batting average on balls in play, and you have something like a mid to high-3 ERA pitcher. Luzardo’s limited time in the big leagues makes it hard to project what kind of batted ball profile he will induce. He has run high groundball rates at points in the minor leagues, but we don’t yet know if he can carry that into a big league starting role.

Puk is projected for similar rates, but a bit more of a walks issue, which push his projected ERA to just above 4. Then again, those projections are partly based on Puk’s time working out of the bullpen, when he relied heavily on his fastball and slider. As a starter, he will work in his changeup and an occasional curveball into the mix, and how those pitches fare could change his outlook. Prospect watchers have hailed Puk as a potential future ace, but the projection systems aren’t fully convinced yet.

All in all, the team that changed baseball with its data driven approach has a rotation that doesn’t look impressive by the computer simulations their ethos helped to popularize. But, as Montas and Fiers showed last season, projections aren’t everything. They might ignore certain skills or miss potential breakouts. Puk, Luzardo and Montas could be a fearsome front three, or a mercurial trio with more potential than results. The projections, which leverage all of our statistically captured knowledge in the sport’s history, show us in this case just how little we know.

The Coronavirus Makes Communication More Important Than Ever:...

Is PNC Blocking Out Venmo Users?…And Other Small...