Home Technology What Will Samsung Announce At The Samsung Unpacked Launch Event? My Predictions On The New Galaxy Z Flip And Galaxy S20
Technology

What Will Samsung Announce At The Samsung Unpacked Launch Event? My Predictions On The New Galaxy Z Flip And Galaxy S20

Tuesday 11th February 2020 is down in the diary as another Samsung Unpacked event, and like many events before it the geekerati have a good idea what is going to be on show. In a world where consumers expect to see a device on sale shortly after its launch it’s hard to generate a complete surprise.

Thanks to the delights of the supply chain, certification authorities, the occasional URL that gives the game away, and third-party retailers who are setting up their pages to accept pre-orders the moment the event is over, everyone is pretty sure what is coming.

The biggest surprise would be Samsung not launching the S20 family at Unpacked! 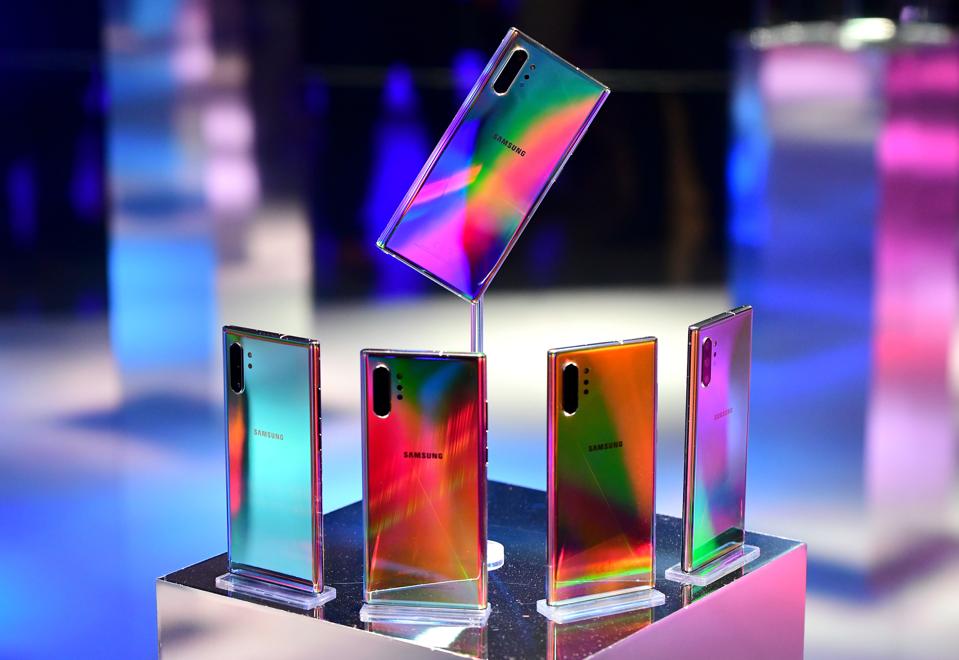 So let’s start with the new Galaxy S flagship. Although the next sequential number would be the S11, everyone (including Samsung’s web masters) is expecting the Galaxy S20. It’s only fitting for a handset in 2020, plus it signifies the changing design of the handset. Plus using 11 would only make it the equal of the iPhone 11 and allow it to be overtaken by the iPhone 12 later in the year. So 20 it is.

Specification wise, expect the US models to continue using Qualcomm’s SnaDragon chipset (with the latest SnapDragon 865 likely), while the rest of the world will have Samsung’s own Exynos chipset driving all the handsets. A base level of 12 GB of Ram would match the competition, while the larger Ultra handset could come with 16 GB of Ram. Why so much space? I suspect to aid the camera and the post-processing of some new feature modes.

Storage wise you’re looking at 128 MB, 256 MB or 512 MB with SD card expansion offering up to 1 TB of storage. It may be that the higher storage capacities will be restricted to the Plus or the Ultra handsets (just like the higher RAM).

Then there’s a question over 5G. Samsung (like Apple) is committed to having 5G available on all of the Galaxy S20 handsets – expect the S20, S20+, and S20 Ultra to all feature 5G in markets where 5G is supported. The question lies in markets with very little or no 5G. Will Samsung go ahead and include 5G in the package, or will it be more conscious of the price and ship a 4G-only model?

And will it restrict the 5G markets to 5G equipped handsets? I’m curious to see how this is addressed at the launch and in the initial sales window. 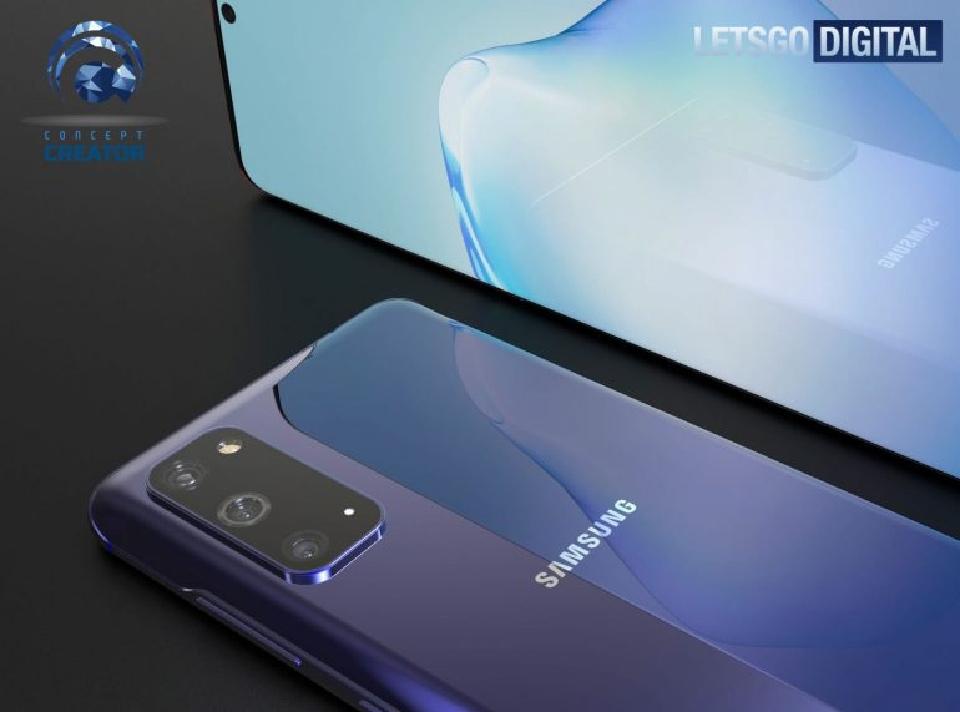 Design wise, with a full screen on the front of the device, there’s very little to differentiate models in the square-on look. The selfie camera is expected to be shifted to the centre of the screen and go under a punch out hole to minimize the surface area eaten up. It’s not quite the under-screen camera other manufacturers are prototyping just now (and I’m sure Samsung is also doing tests on this), but it’s the closest to invisible that is practical just now, especially as it it tucked away in the Android status bar area.

Physically the screens are going to be larger, but the overall size of the handsets should be similar thanks to the smaller bezel sizes… a phrase I suspect you could add to any smartphone launch this year.

Two differences will be visible. The first is that Samsung is removing the ‘edge’ from the handsets – the screen on all the models will now be flat. I’m all for this move, but it is likely to divide opinion. The second change is that the S20 family will join other flagship handsets with a 120 Hz refresh on the screen.

One area where the design is struggling with is the camera. The specifications of the camera are impressive (a 48 megapixel telephoto lens out to x10 optical zoom depending on the model, a 48 megapixel wide-angle lens, a time of flight sensor, and a ridiculous 108 megapixel main camera); the additional software to provide stunning results (including low light performance, improved understanding of depth, and the option to take four photos – one per lens – at the same time); and 8K video recording are highlights.

But there’s no way that all of the camera hardware can look clean and tidy at the rear of the handset. Much like Apple, Samsung is placing the lenses and sensors in a raised island at the top left on the rear. It’s larger than the iPhone island (more lenses) and that makes it look even more ungainly than Cupertino’s. I wonder how well Samsung’s presentation videos and teams can avoid drawing attention to the off-center bump.

Faster connectivity with 5G, a faster screen running at 120 Hz, and a faster camera with larger images. Samsung’s story around the Galaxy S20 family is clear to see. Now that the scene is set, let’s bring on the supporting actors

Curiously, many were expecting the other surprise to be the official reveal of the Samsung Galaxy Z Flip – the South Korean company’s second attempt at an Android-powered folding smartphone, this type folding like a classic flip phone (hence the name).

Except Sunday night’s broadcast of the Academy Awards saw Samsung push the new handset into the limelight. Quite rightly too, it’s one of the biggest stages and the company can get the message out to tens of millions of viewers without being filtered through the press.

Although the technical details are still to be discussed, the folding feature has been confirmed. So has the ability to have the phone hold the screen at a 90 degree angle and act as its own stand.

It also highlights two areas that are going to be closely examined in the press over the coming weeks. Namely the fact that the phone does not close completely to afford some flex at the screen’s curve. And there’s a small note that “you may notice a small crease in the center of the main screen, which is a natural characteristic of the screen.”

When you are already setting out the perceived flaws in your biggest commercial of the year, you’ve got a lot of explaining to do in front of the press… and we all remember the Galaxy Fold.

How Samsung addresses these issues, talks about the Galaxy Fold, and repositions itself in the tempestuous folding phone market will tell us a lot about the shape of that market for every manufacturer during 2020. 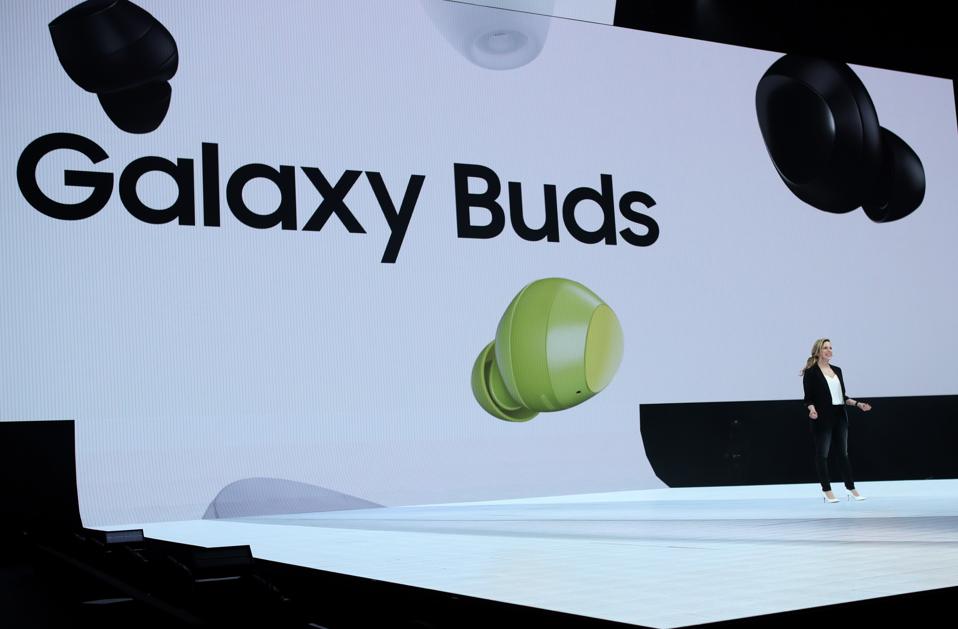 2019’s launch also saw the Galaxy Buds make their first appearance. The wireless buds came in their own wirelessly charing case (with USB-C also available) and offered a much more secure into the ear that Apple’s AirPods. It’s time for Samsung’s Pro pair, although following the Galaxy language expect these to be called the Galaxy Buds+ …and for those looking at pre-ordering the S20 handsets there’s a good chance the Buds+ will be bundled for free.

Outside bets for an appearance could be a Bixby-powered speaker called the Galaxy Home Mini, although this product range has been ‘coming soon’ for nearly two years.

Both the Galaxy Fit and Galaxy Watch Active showed up last year in the fitness category, so you could argue for refreshed units, but I feel the only wearable on show will be the Galaxy Buds+. 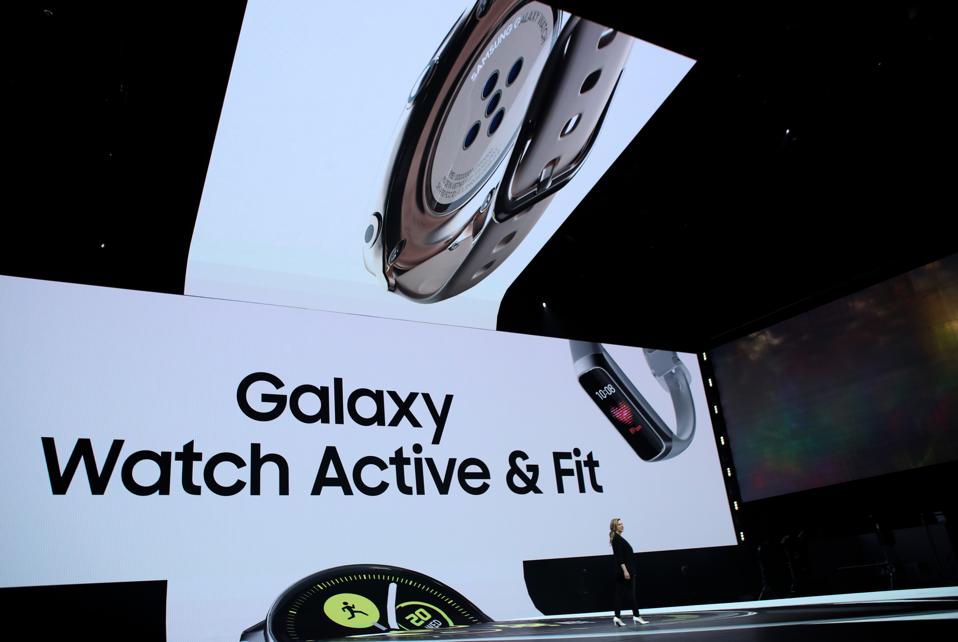 The Samsung Unpacked event starts at 2pm Eastern/11am Pacific. You can watch the event by visiting Samsung’s event page.