Home Technology What’s That Bright Star In The West? Why Dazzling Venus Is At Its Brilliant Best For Eight Years
Technology

What’s That Bright Star In The West? Why Dazzling Venus Is At Its Brilliant Best For Eight Years

Venus will shine brilliantly until May 2020.

Have you seen the super-bright planet Venus lately? It’s hard to miss from the northern hemisphere at the moment, where it’s visible right after sunset, hanging in the western sky for a few hours.

It’s actually climbing higher every night, and will continue to do so until the end of March. So make the best of this spectacular “great evening apparition” (exceptional period of visibility) of Venus—hence its nickname “Evening Star”—because it won’t happen again until 2028.

Venus and the waning crescent Moon rise above the Wasatch Mountains near Salt Lake City on Jan. 31, … [+] 2019.

Why is Venus so bright?

When it’s at its highest in the evening sky, and so furthest from the sun from our perspective (its maximum elongation), Venus—named after the Roman goddess of love and beauty— is a dazzling naked eye sight, and that’s exactly what’s happening right now. Whenever you look at it, Venus is the brightest object in the night sky apart from the moon, thanks in part to the fact that it’s relatively close to us compared with the other planets, and that its cloud-tops reflect most of the sunlight it receives. It’s currently shrining at magnitude −4.1. For comparison, the magnitude of the full moon is −12.7, and the Sun is −26.7.

This week is also one of the best of 2020 to spot Mercury, which has just reached its “greatest eastern elongation.” It’s presently about 18º from the sun, so after sunset when you go out to look at Venus, have a peek down low to the western horizon—close to where the sun just set—and see if you can spot Mercury (it’s not easy!).

The same thing will happen on June 4, 2020, so that’s another great week to try to spot Mercury, though by then Venus will have gone from the post-sunset sky.

The positions of Venus and Mercury after sunset tonight, as seen from mid-northerly latitudes.

What is ‘greatest eastern elongation?’

It’s the highest point above the horizon in the evening sky that a planet appears to reach, as seen from Earth. It happens to Venus on March 24, 2020, so until that date the planet will get higher and higher in the night sky, and so be visible for longer and longer after sunset. Tonight it’s about 32º from the sun, and by March 24 it will reach a whopping 46º. After March 24, Venus will slowly creep closer to the sun, so be visible for less time after sunset, before ultimately disappearing during May on its way to “inferior conjunction” with the sun (so, lost in its glare) on June 3, 2020.

Why is Venus looking its best since 2012?

Venus-watchers know that the planet has an eight-year cycle in which it orbits the Sun 13 times, with one year of that cycle spent dominating the post-sunset night skies as a brilliant “Evening Star,” and then the pre-dawn night skies as a “Morning Star.” That’s what’s happening in 2020; it’s not happened since 2012 and it won’t happen again until 2028. 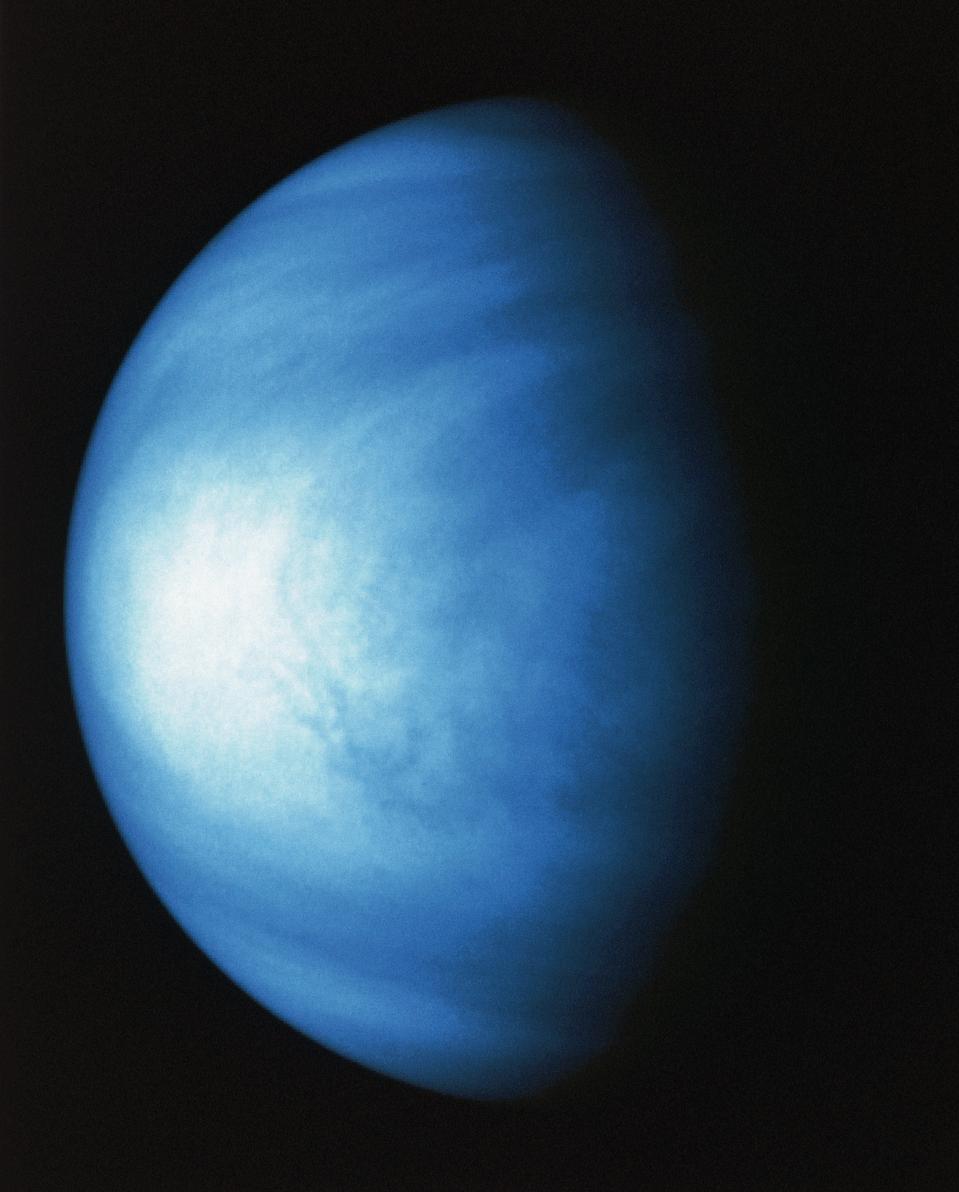 Venus, taken by Galileo space probe. It has been colorized to a bluish hue to emphasize subtle … [+] contrasts in the cloud markings and to indicate that it was taken through a violet filter. (Photo by © CORBIS/Corbis via Getty Images)

Why does Venus have phases?

Venus through a telescope appears very bright, white and featureless, and like the moon and Mercury, appears to have phases as it waxes and wanes between a full, bright disk and a slim crescent. That was Galileo Galilei’s proof that Venus orbited not Earth, but the sun. Tonight, Venus is 70% illuminated by the sun, by March 24 it will be 51%, and by the beginning May it will be 24%—very obvious in telescopes—as it appears to get closer to the sun.

When Venus is between Earth and the sun—something called inferior conjunction—it’s possible to see a crescent Venus, though only in close-up through a telescope. The slighter it is, the easier it is to see. 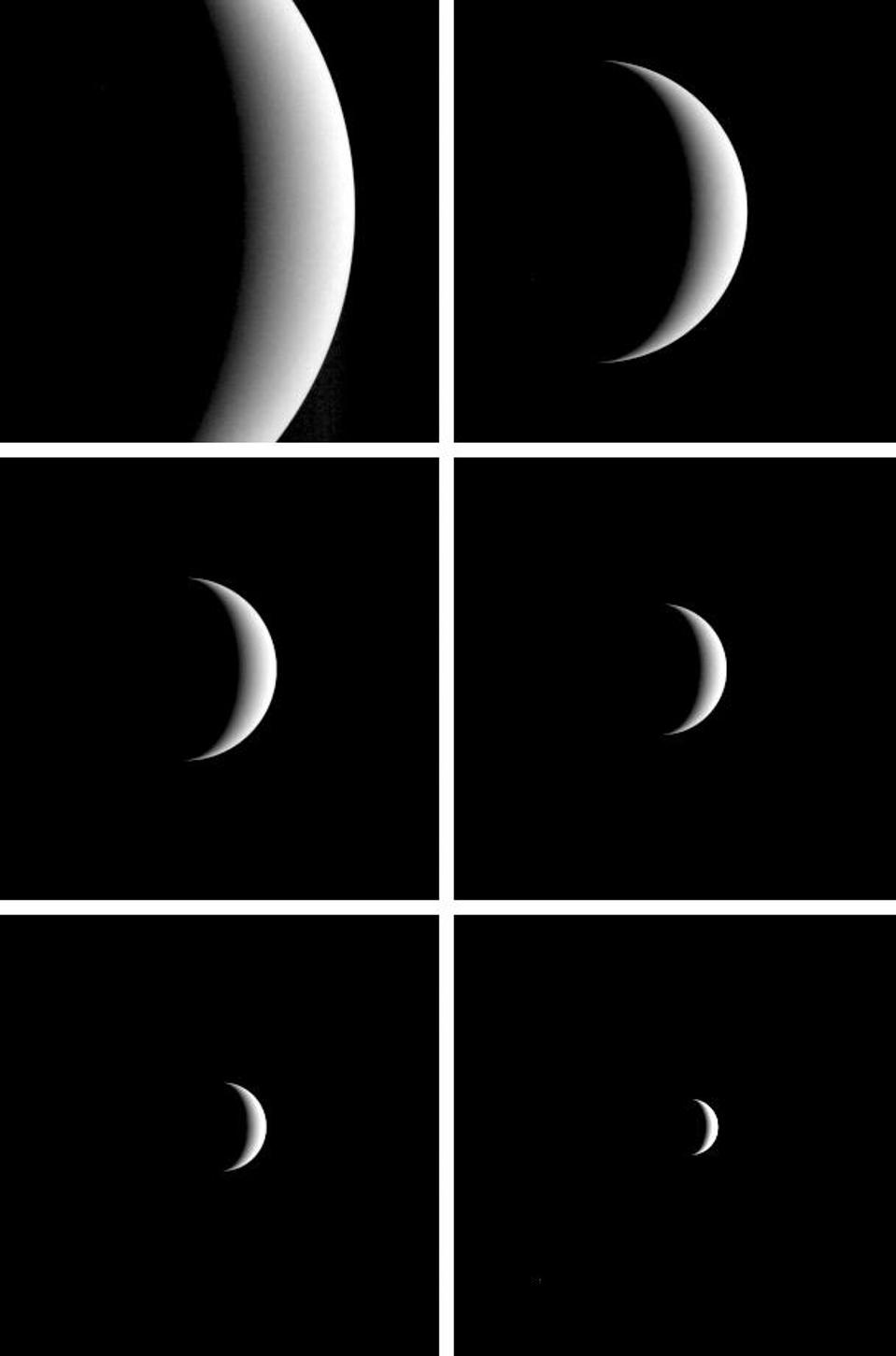 After acquiring hundreds of high-resolution images during close approach to Venus, NASA’s MESSENGER … [+] turned its wide-angle camera back to the planet and acquired this departure sequence in 2007.

Do other planets have phases?

That depends on where you observe from. From Earth, we can see the phases of Mercury and Venus, but not of Mars, Jupiter, Saturn, Uranus or Neptune—the superior, or outer, planets—since they never get between us and the Sun. To get a view of a crescent Jupiter, you’d have to be on Saturn, a crescent Mars would only be visible from Jupiter or Saturn, and a crescent Earth would only be visible from those outer planets (or the moon, as photographed by the Apollo astronauts—see image below).

The crescent Earth rises above the lunar horizon in this spectacular photograph taken from the … [+] Apollo 17 spacecraft in lunar orbit during final lunar landing mission in the Apollo program.

It’s often said that Venus is Earth’s twin. After all, Venus is somewhat Earth-like. A terrestrial planet strewn with volcanoes and craters, it’s got a near-identical density to Earth, and is only 0.82 times its mass. However, it can reach 869°F/465°C on its surface and it has a thick atmosphere of carbon dioxide. Life seems unlikely on its surface, but its fast-moving sulphur and sulphuric acid clouds could theoretically host microbial life. So most questions about life on Venus concentrate on studying its clouds.