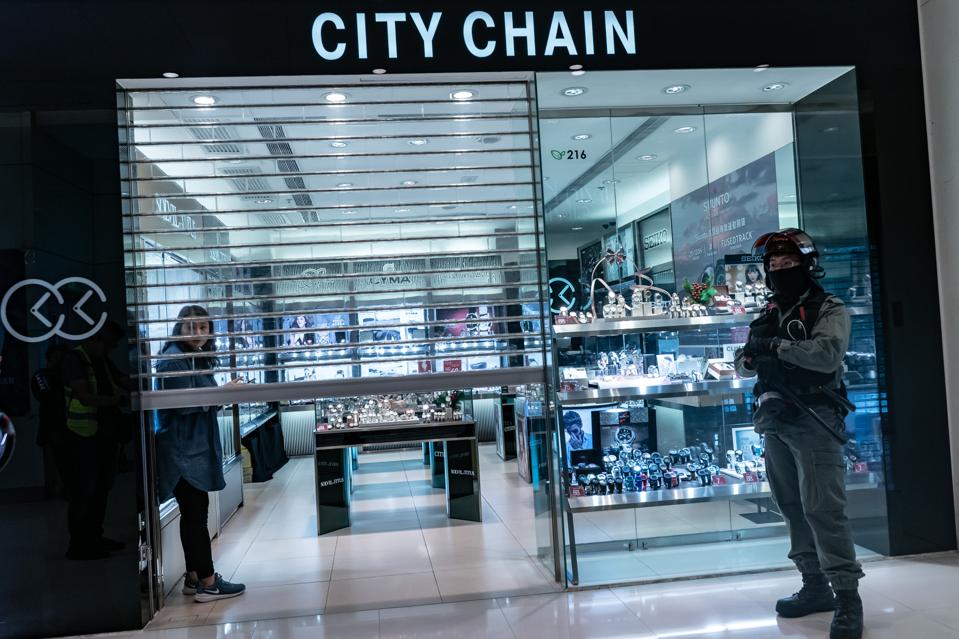 HONG KONG, CHINA – December 28: A riot policeman stands guard in front of a watch shop during a … [+] demonstration in a shopping mall at Sheung Shui district on December 28, 2019 in Hong Kong, China. Anti-government protesters in Hong Kong continue their demands for an independent inquiry into police brutality, the retraction of the word “riot” to describe the rallies, and genuine universal suffrage. (Photo by Anthony Kwan/Getty Images)

Hong Kong has seen significant unrest in the last several months and while the focus of media attention has focused – rightly so – on the protests, many have ignored the fact that Hong Kong is more than a conflict zone.  The coverage has ignored some crucial aspects such as Hong Kong’s slowly capsizing retail sector, and the local economy teetering on the brink as retail sales by value declined by a record 26.20% in October.

Local unrest and decreasing trade activity are two trends often intertwined and highlighted fabulously by the events in Asia’s “Fragrant Harbour”. Once a bastion for tourism, the city’s retailers are staggering at the draught of visitors, and in a survey covering chain stores and small retailers 30.00% of businesses said they’d need to lay off at least 10.00% of employees in the next six months.

A survey by the Hong Kong Retail Management Association (HKRMA) showed that retailers are in the throes of despair. Most respondents reported losses since the protests began in June and a whopping 43% of retailers said they might have to close down completely.

At the end of October, Hong Kong officially entered recessionary territory, as stretched police resources failed to deal with the increasing number of public assaults and vandalizations. The burden on police to deal with protestors distracts from their duty to protect retail outlets, and this wholesale destruction is displayed for people to see the world over. Crime gangs have seized the opportunity and are using the protests to rob stores. The number of robberies has gone from 44 to 126 from July to November. Compared to 2018, robberies have increased by 147 percent. Burglaries have also doubled during the same time period.

Unprecedented media coverage of the violence often omits the fact that Hong Kong’s GDP contracted by 3.20% during the third quarter, after slipping -0.50% in the second quarter compared to the first.

Residents are harmed economically as the city’s new reputation scares money away from retailers, with tourism dropping over 50.00% and estimated to plunge even further. The ongoing turbulence has also harmed the consumption habits of local social residents, say government spokesmen, and this is no surprise considering that economic performance today has surpassed metrics taken during the 1998 Asian financial crisis. Nielsen’s local consumer confidence figure has accordingly turned gloomy, printing at 86 during the third quarter (a number above 100 signals optimism, and below indicates pessimism) and marking the lowest level seen since 2016.

In terms of raw crime and violence against individuals, Hong Kong’s current anomaly pales in comparison to cities like New York, and to date not a single foreigner has been harmed during the 7 months of protests.

Not all is lost as Hong Kong stock index, the Hang Seng Index, is on track to end 2019 higher than where it started in 2018. This is an indication that investors still view Hong Kong as a gateway to China with strong future prospects. Hong Kong remains open for business and thoroughly stable for foreign money, yet for investors considering the city as a potential base, perception is everything.

Though it’s safe to wander around in the city, any change in safety would lead to a steep decline in foot traffic which would then have a significant ripple effect economically, and soon, a deficiency of tourists would turn into a dearth of investors, and then an empty employment market.

The dominoes have not begun to fall only now, with retail sales in constant decline since the beginning of the year. For the first time in two years, Hong Kong’s jobless rate has inverted, and though it’s only up to 2.9%, estimates are unanimous that more trouble is ahead. As cracks begin to show, it’s in protestors’ best interests to begin to seek a conclusion to the debacle, and other world powers removed from the unfolding events have already gained this perspective.

Kurt Tong, US Consul General in Hong Kong, recently penned an article that reached the conclusion that US should reinforce the paradigm of ‘one country, two systems’, while avoiding steps that would undermine it. Tong indicates the strategy should be “not to instigate change in Hong Kong but to reinforce the status quo”. He notes that “focusing US policy on supporting and strengthening Hong Kong will do far more good—and risk far less harm—than will attempts to compel changes in, or impose direct costs on policy decisions originating in Beijing.”

Tong may well be correct. An immediate return to the status quo is perhaps warranted as the economic situation spins out of control. A ceasefire outcome would preserve peace and economic prosperity while the option is still on the table, protestors having already proven their point. Should they continue to move the goalposts, however, their economy might just move elsewhere.

Where The Detroit Pistons Stand On Day 1...

The New Communication Tools Are Powerful, But They...