A plane is seen flying in front of a full moon.

Are you ready for a rare planetary “kiss” and the final full moon of the year?

Go outside after dark this month in the northern hemisphere and you can see the glittering stars of winter rising in the east in a cold, crisp and (hopefully) clear sky, from awesome Orion to scintillating Sirius. However, the year’s best seasonal star-fields take a back seat this week as the moon and two planets each do something rather eye-catching.

Take a look to the southwest just after dark this weekend and you’ll see the brilliant planet Venus at its dazzling best, and close to it, rather dimmer Saturn. As the week commences Venus will appear to “catch-up” on the ringed planet and, by Wednesday, overtake it.

The best time and place to see it will be Tuesday just after sunset in the southwestern sky.

The following evening, with the two planets imperceptibly further apart, is when you should also look for the rising “Cold Moon” in the eastern sky. It’s two celestial super-sights, and all for just a 180º turn of your head. 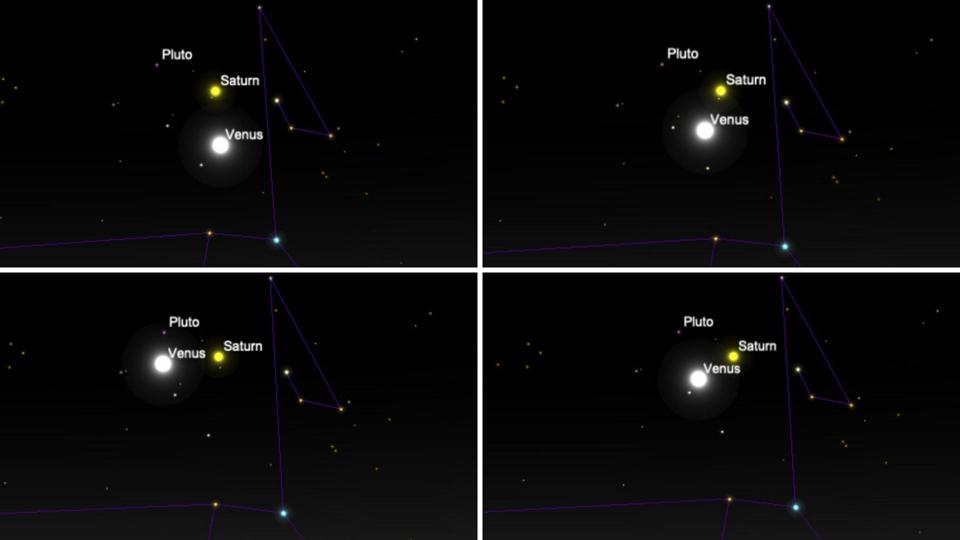 When and where to watch Venus and Saturn ‘embrace’

Although the two planets will appear to be at their closest twilight Tuesday about 11° above the southwestern horizon, you can actually begin watching the show this weekend as Venus races towards Saturn. Here’s how far apart the planets will be all this week, according to When The Curves Line Up:

Brilliant Venus will shine at magnitude -4.0 about 30° from the sun, and appear to the lower left of Saturn, which will itself be easily visible in a clear sky, shining at magnitude 0.6. You might also see Jupiter, shining very low on the horizon. It’s worth a look since the gas giant will soon be gone from the evening sky.

This captivating natural color view of the planet Saturn was created from images collected shortly … [+] after Cassini began its extended Equinox Mission in July 2008.

When and where to watch the ‘Full Cold Moon’

December’s Full Moon—the “Cold Moon” or “Long Nights Moon”—is 100% illuminated at 05:14 UTC on Thursday, December 12, which makes moonrise during dusk on Wednesday the best time to see it (unless you plan to be up to watch the moonset before dawn on Thursday). You can check your location’s exact moonrise times here for both Wednesday and Thursday evenings, which will be just as impactful this month since moonrise also occurs very close to sunset.

About 30 minutes after you’ve witnessed the moon peaking above the eastern horizon, swivel 180º and look for a dazzling Venus close to Saturn.

The COVID-19 Coronavirus Pandemic Highlights The Importance Of...