Home Business Who Is HBO’s ‘Watchmen’ For, Exactly?
Business

Who Is HBO’s ‘Watchmen’ For, Exactly? 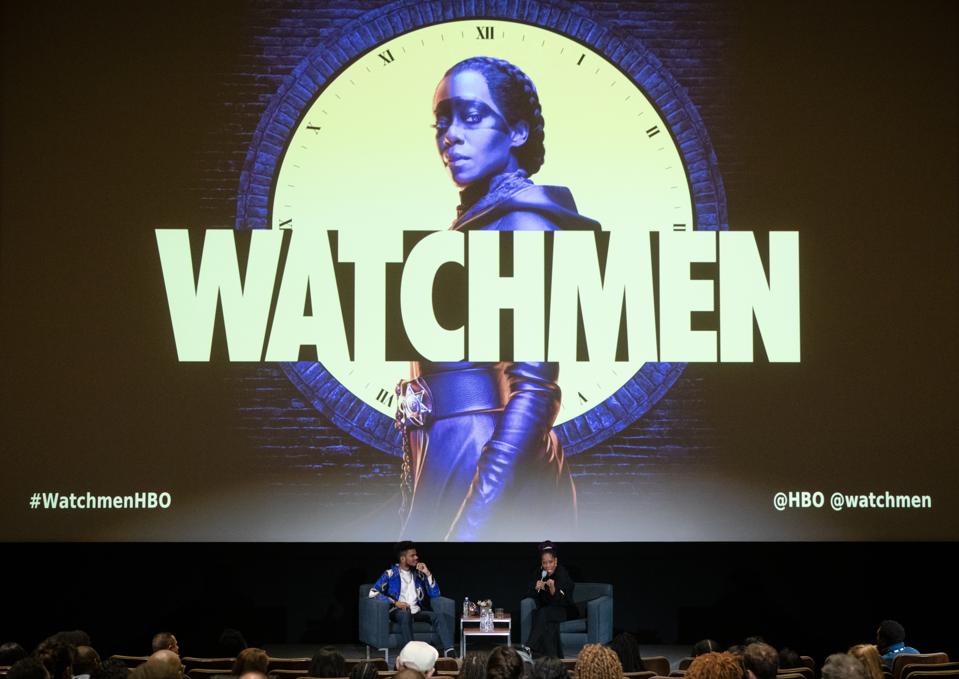 Sometimes, when I’m watching HBO’s Watchmen with my wife, she’ll ask a simple question relating to the story (she hasn’t read the original comic book, which the show is a direct sequel to).

In response, I’ll sputter out the most ridiculously convoluted nonsense, in which I attempt to explain how and when the alternate timeline diverges, a quick character breakdown of the original Watchmen and Minutemen teams, and the giant psychic squid monster that was a massive hoax but also a real thing that was genetically engineered for a one-time use, and also psychics are real in this universe but I’m not sure if it affects the show.

By that time, Watchmen will have moved on to another potentially confusing plot point and I’ll decide to let the series speak for itself (which it does, but only to a certain extent).

I’m thoroughly enjoying the show, but I can’t help but wonder how popular it is; HBO’s Watchmen might be a rare example of a reboot/sequel weighed down by its connection to the original property, rather than elevated.

In order to fully understand the show, one has to be intimately familiar with the source material. But the show diverges from said material to such an extent that comic book purists will be disappointed; worse, the show doesn’t manage to replicate the nuance of Alan Moore’s story.

It’s certainly unique, and as a piece of licensed fan fiction, it’s great – if you enjoy Westworld-esque mystery stories then you’ll likely enjoy yourself. But Alan Moore’s Watchmen was a condemnation of all forms of authority, mocking the concept of a benevolent superhuman, and portraying masked vigilantes as emotionally unstable.

HBO’s Watchmen focuses almost entirely on racism, rather than power dynamics. Amusingly, that fact alone will turn off a significant portion of the audience, the kind whose perception of reality has been poisoned by YouTube videos with titles like, “Brie Larson DEMANDS that Marvel FIRE Kevin Feige for being too white and male!”

And that’s fine, nobody wants that fanbase anyway. But sometimes, Watchmen’s condemnation of racism feels absurdly on-the-nose, a world of lynchings, Klan hoods and race riots.  Do oppressed minorities enjoy watching shows that tell them how oppressed they are? Or is this a self-congratulatory show that makes white people, critics especially, feel “woke” for watching?

I can’t help but notice that the racist characters in Watchmen are openly, often rabidly racist; there’s very little nuance, no character acting in a subconsciously racist manner – everyone wears their prejudices on their sleeve.

Is this a good depiction of structural racism? I’m not qualified to say, but it certainly doesn’t feel subtle, and more importantly, never makes the viewer feel uncomfortable. After all, it’s very easy to dislike racist antagonists, but a benevolvant, likable character who also happens to be a bigot would be deeply uncomfortable, and perhaps prompt some introspection among the audience.

Interestingly, one episode features a character, Will, who has suffered terribly from the effects of racism, at one point, even surviving a lynching. His wife keeps telling Will that he is “too angry” and needs to find a way to channel his rage. But we, the audience, never see that rage, aside from a single scene in which he shoots some Klan members, in full costume, who were using mind-control technology to incite riots among black people. That’s comic book justice, easily forgivable – I certainly didn’t judge Will for firing the gun.

But Will is never shown losing his temper in an unsympathetic manner, like lashing out at his wife and child, for example. Surely, a life spent under the boot of white supremacy might cause Will to become violent, abusive and generally unlikable. But the show doesn’t dare depict this. We are merely told, through dialogue, that Will is “full of rage.”

The show also seems to completely ignore classism in its clumsy condemnation of racism; one scene in which the police beat a crowd of working-class folks living in a trailer park felt disturbingly unambiguous, as though the audience was supposed to feel catharsis that these potential bigots were suffering the effects of police brutality.

Alan Moore’s Watchmen depicted power dynamics and morality as immensely complicated, and HBO’s Watchmen absolutely does not; bad people are racist, and racism is bad. And if you’re looking for a legitimate heir to Moore’s story, “racism is bad” simply doesn’t cut it.

To be fair, the show isn’t over yet, and these criticisms might well be rendered void during the finale; the overarching mystery makes it difficult to fully judge until the story reaches its conclusion.

But the reason I enjoy watching Watchmen is not for its condemnation of racism – it’s the immensely talented cast, the subtle worldbuilding, the wild plot twists, and most importantly, because it’s so delightfully bonkers. Despite tackling a deadly serious topic, the show delights in the unexpected and absurd, a bizarre sci-fi story where the viewer is never quite sure what the next episode will bring; Adrian Veidt’s surreal side story is especially enjoyable.

But in order to fully understand this weird world, you have to first read Moore’s Watchmen, but tolerate a significant deviation from it, as well as studying the reading material HBO releases after every episode – that’s a lot of homework for a few episodes of tv. It seems as though the show has walled itself off from the general audience, appealing to an extremely narrow demographic, despite being based on an iconic comic book.

Perhaps Damon Lindelof might have been better off creating his own wacky world that pokes fun at costumed crusaders, without the weight of expectations that accompanies an adaption of Alan Moore’s Magnum Opus.

The Four Real Rules For Taking On A New Business Partner

Intel + Habana: What Does It Mean For...

Artisan Cheese In The New Decade

Duterte Is Turning Philippines Into A More Corrupt...