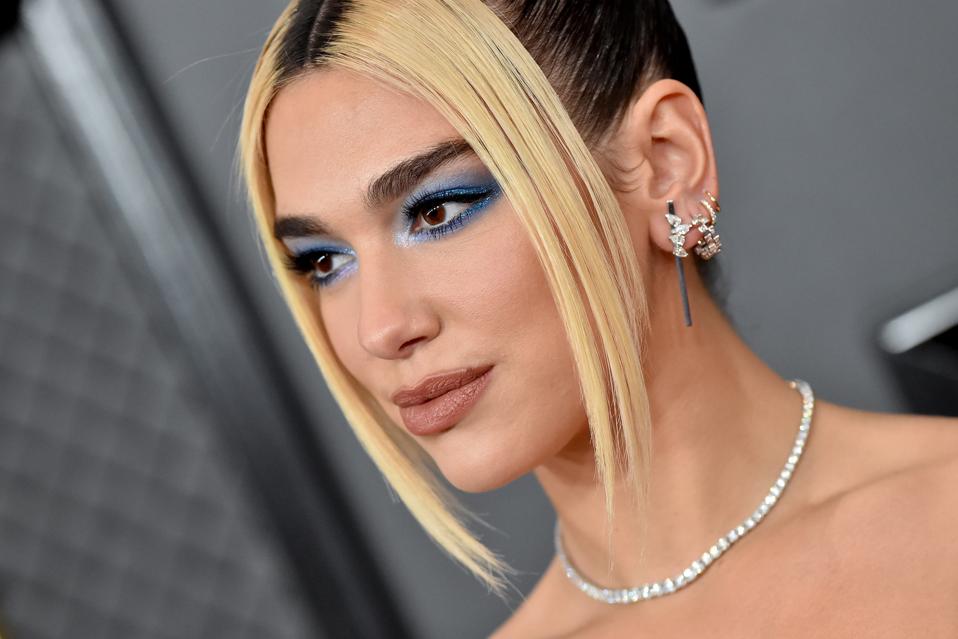 Taylor Swift, Lady Gaga, Rihanna and Ariana Grande watch out: Dua Lipa is staking her claim to be the new queen of dance pop. Her right to the title may sound like a long shot at first glance: the 24-year-old Briton, of Albanian origin, is way behind her rivals in terms of earnings and name recognition, even though last year she won the Grammy for Best New Artist. Her sophomore album is being rush-released on March 27 after an unfortunate internet leak. Yet Future Nostalgia is an impressive slice of pop that fulfils its creator’s dream of sounding both retro and futuristic, a “dancercise class” with hit potential. Lipa, the new face of Yves Saint Laurent, has huge potential herself.

Singles off the album have already pointed the way. The eclectic title track was a promotional release. Then “Don’t Start Now” reached No. 2 in the U.S., Dua Lipa’s second top 10. Its placing exceeded the No. 6 peak of her acerbic song “New Rules” in 2017. She debuted on the Forbes 30 Under 30 List in 2018 on the back of that earlier single.

She followed in January this year with “Physical,” which now has been reworked with Hwa Sa from the girl group MAMAMOO – Dua Lipa has embraced K-pop before. “Physical” pays homage to the Olivia Newton-John song of the same title from 1981.

Dua Lipa’s recent singles have earned acclaim for an electronic, disco-ready style. The best may well be yet to come. Today she released a glossy video for “Break My Heart,” a song that recalls everything from Blondie to Lorde’s “Green Light.” The track samples INXS’s insidious guitar thump from “Need You Tonight.” The chart performance of “Break My Heart” may well be helped by its video, which dodges between disco, street, bedroom and plane locations. The chorus is apt in this time of coronavirus: “I would have stayed at home ‘cause I was doing better alone.” The singer is wondering if she should get involved in love and risk having her heart broken yet again.

Despite the knowing references to music of the past, the result is genuinely fresh and radio friendly, a sly wink to the new decade. (The title oddly recalls the Frank Ocean mixtape Nostalgia, Ultra too.)

Du Lipa’s concise 37-minute album has no filler or timewasters. Most of the songs are a tight three minutes. The mood is bouncy and upbeat. Yet she doesn’t take herself too seriously, as on the playful “Good In Bed.”

Even so, she can be serious on occasion. The closer “Boys Will Be Boys” speaks to #METOO and gender balance. “The kids ain’t all right,” Dua Lipa intones, and gets sarcastic: “Boys will be boys and girls will be women.”

Dua Lipa is releasing the album to a clear field at present. Others such as Lady Gaga have put back the release dates of their albums because of coronavirus. Gaga’s Chromatica was due on in April and will now emerge later in the year. The British star agonized over the decision and may well be right that listeners are craving a bit of fun and happiness as they self-isolate, even amid warnings of more tragedy.

The album is definitely light on slow ballads and bone-crunching rockers. It is immaculately produced, maybe too clean for some. Fans of artists as diverse as Selena Gomez, Rihanna, Katy Perry and Miley Cyrus may all warm to this.

“I know you’re dying trying to figure me out,” she sings on the title track. “My name’s on the tip of your tongue.” Dua Lipa is not yet a household name, but at this rate she will be soon.

The Tale Of Koko, The Nursing Home Therapy...