Home Technology Why Every Company Is A Data Company
Technology 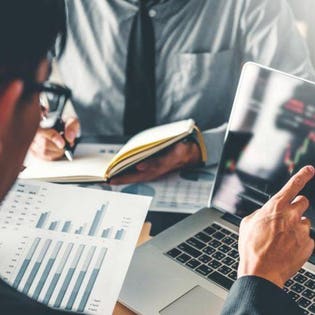 Sportswear giant Nike recently announced that it would replace longtime CEO Mark Parker with John Donahoe, a veteran technology executive who spent a decade as president of eBay Marketplaces before serving most recently as CEO of cloud computing company ServiceNow.

Donahoe’s hiring represents a notable shift for the brand, and the move has been widely seen as a signal that Nike plans to double down on its e-commerce business in 2020 and beyond. Some analysts have said the hiring means that Nike is becoming a tech company, or more specifically, as Darren Rovell puts it, “a technology company that happens to sell shoes and apparel.” These observations are correct, but in my humble view they only scratch the surface of a much deeper trend.

Every Company Is A Data And Analytics Company

Today, the idea of a technology executive becoming CEO of an apparel company is relatively novel, but that won’t be the case for long. As businesses become more reliant on data, analytics, AI, automation and IoT technology, I think we’ll begin to see more technology-savvy executives infiltrating top leadership positions outside of the tech industry. In part, this is because every company is a tech company. However, this shift is also taking place because, increasingly, every company is a data and analytics company.

Data analytics is reshaping business operations and enabling new revenue streams all across the global economy. Soon, data itself will become a primary product for nearly every business, and data analytics (some use the loose term “AI”) will form the core of every company’s business model. Nearly every product on the market will be forced down one of two paths, becoming either “smart” (i.e., analytics- and data-driven) or obsolete. This may sound extreme, but I truly believe it and have seen it happen firsthand. Let’s look at some examples.

Nike’s leadership transition is a natural outcome of the athletic apparel industry’s recent evolution. Athletic apparel companies are embracing the use of data and cutting-edge technologies to revolutionize the design of modern activewear, not just through wearable device technology, but in the clothing itself. That may take the form of new high-tech materials and fabrics, like Google’s Jacquard, which is already demonstrating the potential of smart clothing.

In 2019, Nike released a new brand of smartphone-enabled self-lacing shoes, with plans to embed sensors that will allow the shoe to detect the wearer’s blood pressure and adjust lace tightness accordingly. This is a terrific example of how companies are transforming data into products, and just the tip of the iceberg for athletic apparel. Can a shoe become a bio-platform? Of course, it can, and I believe it will given the form factor it owns.

We already have the technology to build smart shoes that can provide real-time biofeedback while users exercise. We’ve seen it in smart scales that use sensors to measure BMI, muscle mass, heart rate and more. It won’t be long before companies like Nike are building digital assistants to compete or integrate with FitBit, Apple’s Health app and others.

Insurance companies have always used data to determine premiums and approve claims. However, the industry has long resisted embracing newer technologies to improve customer experience. Instead, customers spend hours filling out reams of paperwork and wait days for the insurer’s underwriters to review their applications using semi-manual processes and, worse, high-level statistics. This process is slow and frustratingly opaque, and it gives customers little recourse when they find that their premiums are exorbitantly high, or that an insurance claim has been denied.

The founders of insurance startup Lemonade saw this as an opportunity. Leveraging AI and analytics technologies, the company pioneered a new operational model that offers unparalleled efficiency. By asking a few quick questions via its virtual assistant, the company’s software is able to cross-reference this information with key data points pulled from the internet and other resources, determining premiums and approving claims in seconds.

This becomes personalized insurance, using granular, predictive analytics rather than high-level generic statistics. The difference is massive in its potential. This approach is helping Lemonade win big among the next generation of insurance buyers, with 81% of the company’s customers being 25-44 years old.

Some of the most clever examples of data-driven business innovation come from the fast food industry. In Mexico City, the global fast food giant Burger King has created an experimental new app that allows participating restaurants to pull revenue from an unexpected source: traffic jams.

Customers who find themselves stuck in traffic near a Burger King can use the app to order food delivery directly to their car via motorcycle. The app also detects when traffic jams occur, activating nearby digital billboards to promote the service. This would be impossible without the ability to review data streams, perform analytics and take action in real time.

Meanwhile, McDonald’s recently acquired tech company Dynamic Yield in a bid to bring a new level of personalization to its drive-thru. Dynamic Yield’s technology will allow the company to create a drive-thru menu that is tailored to relevant contextual data such as the weather, but also personal taste so that the menu highlights hot soups on cold, rainy days, while removing ice cream and other cold treats that are unlikely to be appealing, assuming, of course, you like soup.

Changing The Way We Do Business

These are just a few examples of the countless industries in which trailblazing companies are restructuring their business models around data and analytics. Savvy business leaders who are ready to find new ways of generating value from data will be poised to succeed in this evolving landscape.

Those who cling to outdated paradigms will become obsolete. It won’t be long before we see more tech executives taking the reins at “nontech” companies. In the meantime, ambitious young professionals who hope to one day reach the C-suite would do well to brush up on their analytic skills.