Home Technology Why Is It Called Legionnaire’s Disease?
Technology 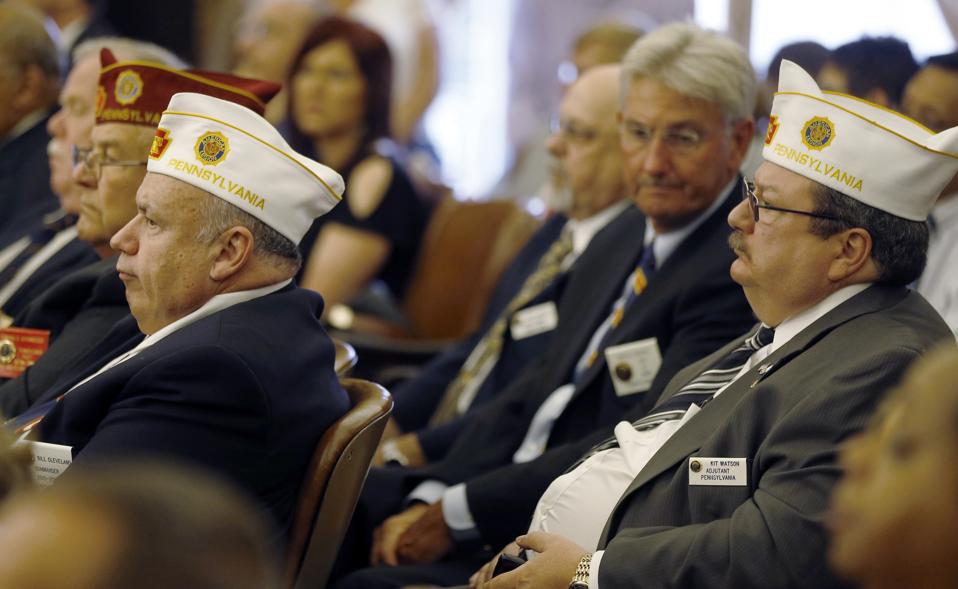 Members of veterans organizations listen to testimony during a congressional committee hearing on a … [+] Legionnaire’s disease outbreak at Pittsburgh’s Veterans Affairs hospitals that since 2011 has killed at least five patients and sickened 21, on Monday, Sept. 9, 2013, in Pittsburgh. (AP Photo/Keith Srakocic)

On December 1, 1977, a team of CDC researchers published a long-awaited paper describing the bacterium which had swept through a convention of the American Legion the previous year. The Legionnaires met at a Philadelphia hotel in July 1976, and it seemed like a successful gathering for the veterans’ organization. But two days after the attendees returned home, people started getting sick, and then dying. In all, 182 people got sick and 39 died.

Public health officials and the Centers for Disease Control (CDC) didn’t take long to realize that all of the patients had been at the Bellevue-Stratford Hotel during the American Legion convention, and an Associated Press report dubbed the outbreak “Legionnaire’s Disease.” The name stuck, and when CDC research Joseph McDade and his colleagues finally identified the previously unknown bacterium responsible, they named it Legionella pneumoplia.

The bacteria had been hanging out in the hotel’s air conditioner cooling towers, it turned out. McDade and his colleagues announced their discovery in January 1977 and published a more detailed scientific paper about it several months later, in December. By then, the Bellevue-Stratford Hotel had closed; it turns out that being ground zero for the outbreak of a brand-new infectious disease is bad for business.

But Legionnaire’s Disease, or legionellosis, as it’s now formally known, also calls to mind the American Legion every time it’s mentioned. (Perhaps that’s not entirely fair, given that I spent several years assuming it was linked with the French Foreign Legion; it seemed like the sort of disease soldiers in the field, drinking bad water, would catch, after all. A fancy hotel in Philadelphia isn’t a logical culprit, but that’s science for you.) The association doesn’t seem to have done the American Legion any harm, but elsewhere, diseases’ names have done as much harm as the diseases themselves.

What’s in a Name?

When elementary students in Norwalk, Ohio started getting sick all at once, with similar symptoms of nausea, diarrhea, and abdominal pain, the press naturally referred to the culprit as “Norwalk agent,” and later “Norwalk virus.” The Norwalk Chamber of Commerce probably wasn’t thrilled by the notoriety, and today they’ve mostly escaped it; the virus is now known as norovirus, the scientific name of the virus itself.

At first, however, it looked like the International Committee on the Taxonomy of Viruses (the scientific organization responsible for approving formal names for viruses) wasn’t going to let Norwalk off the hook on bad publicity – not because they had anything against Norwalk, but because they were concerned about people with the family name Noro, which is common in Japan and elsewhere. And that makes sense – imagine being named Ebola.

Or being from a place called Ebola, which is what people living along the Ebola River, in the Democratic Republic of the Congo, have to deal with. People from the town of Lassa, Nigeria, are forever saddled with the stigma of Lassa virus, another nasty hemorrhagic fever. Marburg, Germany is the namesake of Marburg virus.

“This may seem like a trivial issue to some, but disease names really do matter to the people who are directly affected,” said Keiji Fukuda, Assistant Director-General for Health Security at the World Health Organization (WHO) said in 2015. “We’ve seen certain disease names provoke a backlash against members of particular religious or ethnic communities, create unjustified barriers to travel, commerce and trade, and trigger needless slaughtering of food animals. This can have serious consequences for peoples’ lives and livelihoods.”

That’s why, starting in 2015, the WHO has asked people – reporters, scientists, and members of the public – to avoid naming or nicknaming new diseases after individuals, groups of people, places, or animals (among other guidelines). Since 2015, the guidelines haven’t been put to the test – but time will tell whether they avoid putting the next Norwalk or Lassa on the spot. And the people already saddled with the stigma of careless disease names are still stuck with them.

Brazilian Researchers Defy The Government To Reveal The...