Why It’s Too Soon To Let Renewable Energy Subsidies Expire 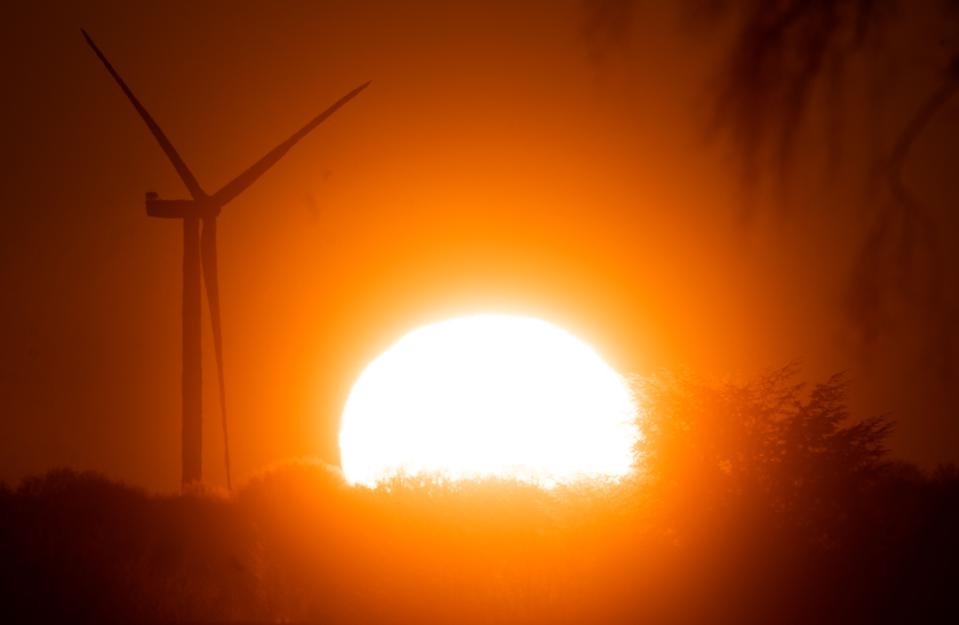 Solar and wind energy only happen when the sun is shining or the wind is blowing with enough … [+] intensity. That means that their producers often miss out on peak pricing. (Photo by Julian Stratenschulte/picture alliance via Getty Images)

Renewable energy is starting to lose its subsidies because it has proved that it can be as cheap and even cheaper than fossil fuels. For example, China and the United Kingdom, two of the most ardent supporters of green energy, have recently pulled back on subsidies, and the Trump administration in the United States would also like to. But while wind and solar power rates can cost less than traditional fuels, the subsidies are masking another problem — one that is becoming apparent as the subsidies are eliminated.

Where coal and gas generators can ramp up production easily to accommodate peaks in demand and pull back when there’s a dip, wind and solar energy cannot. There’s solar when the sun shines and wind power when there are strong winds. That often prevents renewable energy producers from benefiting from attractive prices that accompany peaks. Sometimes they even find themselves producing when there is an oversupply, selling power for cut-rate or even negative prices — essentially paying customers to take their energy.

The intermittent nature of wind and solar means that renewable operations are likely to systematically receive a lower overall market price than the average generator. While volume-based subsidies currently smooth out this problem, returns on investment will likely begin to decline once operators in systems with large-scale dependence on renewable energy can no longer depend on them. No subsidies may mean that many renewable producers will become no longer financially viable, and the current effort to switch global power generation to renewable sources may be undermined. 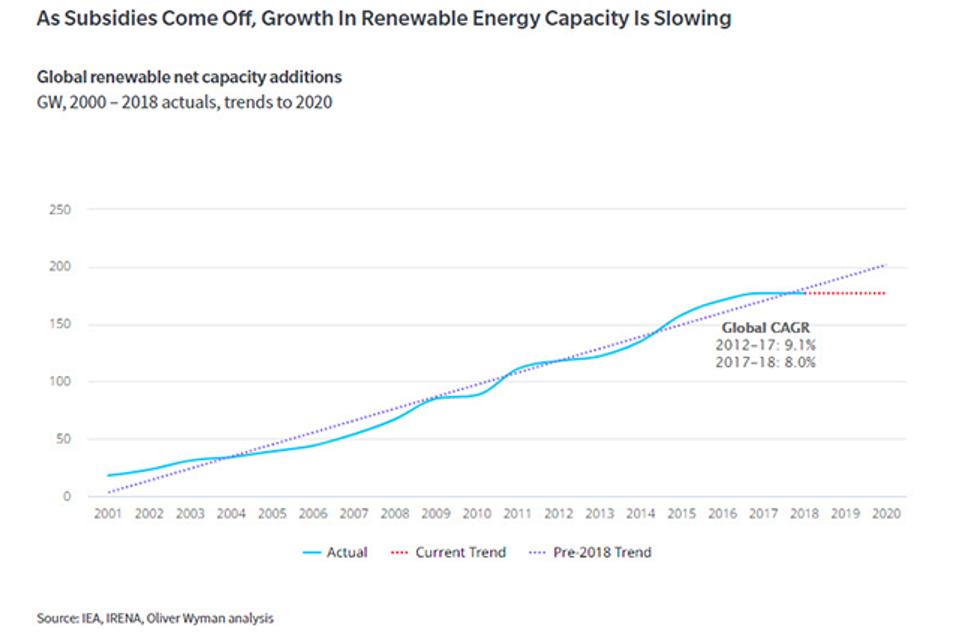 Without subsidies, fewer projects have the correct economics to move forward on solar and wind … [+] capacity

Building storage for renewable energy would allow producers to match supply and demand as fossil fuel generators do and make pricing more predictable. Ultimately, renewable storage may make subsidies unnecessary. But for this to work, the reduction of subsidies must be carefully coordinated with development of storage in the system. Subsidies should not be eliminated until enough storage is developed to overcome renewables’ problem with intermittency.

Problem solved? Not quite. While storage sounds like a simple solution — especially since the technology exists and is in use — it’s not. Storage comes with its own costs, and while these have dropped dramatically in recent years, they still represent a significant, additional burden for renewable energy projects. It is not easy to find the right balance of storage and generation capacity that results in a positive commercial case for projects. In the meantime, subsidies could be linked to the timing of generation rather than just volumes.

One goal of storage is to create enough predictable output to encourage utilities and other corporate energy customers to agree to long-term power purchase agreements, and banks to finance new projects, over a 10-year to15-year period — whether or not subsidies still apply. Right now, renewable projects without subsidies or storage are lucky to get customers to sign two-year or three-year purchase agreements because of the lack of pricing predictability.

Currently, the combination of renewable generation with storage has largely been restricted to small-scale solar generators usually dedicated to a single customer. But as subsidies for renewables are reduced or ultimately withdrawn, we expect the economics of renewable energy to favor projects with large-scale generation of hundreds of megawatts paired with storage. The projects also will increasingly include wind-turbine operations rather than just solar.

A few projects in the United States are already in the process of developing impressive combined generation and storage. For instance, NV Energy, Berkshire Hathaway’s power company in Nevada, announced that it plans to build three new solar power projects that together total 1.2 gigawatts. The project is being paired with 590 megawatts of storage capacity.

But if subsidies are removed precipitously, the renewable energy generation industry may lose momentum and even see a rollback. With the first signs of subsidy removal, development of renewable energy projects in 2018 slowed in almost every region — including China, where growth dropped to 12.1 percent after sustaining a 15.5 percent compound annual growth rate between 2012 and 2017.

The US Energy Information Administration reports that 28 percent of electricity generation globally in 2018 was from renewable energy and will only reach 49 percent by 2050. That’s disturbing given the planet’s need to cut back on carbon dioxide emissions and international targets that call for net zero emissions by 2050.

Given the sluggish adoption, some degree of subsidization will be needed for the foreseeable future. After all, the International Monetary Fund estimates direct and indirect subsidies to the global fossil fuel industry in 2017 totaled $5.2 trillion, up from $4.7 trillion in 2015, despite the climate crisis.

While renewables have proven they generate cheap electricity, the financial risks of some of these projects have not yet been fully mitigated. Renewable power generation is moving into a new phase, and while it is no longer crawling, it isn’t running yet either.

Andrew Perry is a principal and Matt Cleary is an engagement manager with Oliver Wyman’s energy practice. Both are based in London.

Damien Harris Became A Redshirt For The Patriots,...

Why High-Growth Businesses Are Turning Their Backs On...

How Will ICANN’s Decision To Allow Domain Registration...