Why The Oakland A’s May Trade Blake Treinen, Jurickson Profar and Josh Phegley 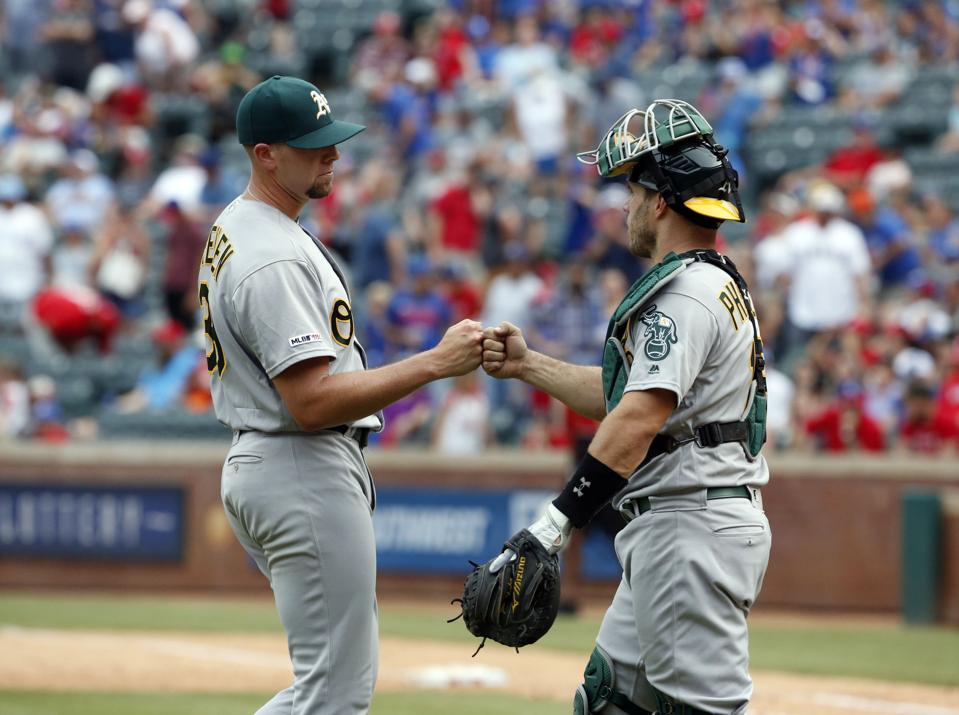 The Oakland A’s have long worked the system through which players are compensated for their first six years to keep their overall payroll down. That same system, however, may render three players not worth the space they would occupy in the team budget. The arbitration system offers players their first shot at many millions of dollars, while still often providing less than what they would get on the open market. However, the reverse can be true as well – it can make certain players more expensive than many teams are willing to pay. That’s why the team may soon move on from reliever Blake Treinen, second baseman Jurickson Profar and catcher Josh Phegley.

For a player’s first three seasons, he makes the league minimum — $555,000 for a first year player in 2019 – which goes up to just under a million in the third year. After that, the arbitration system kicks in, an antiquated procedure that rewards the “traditional” stats like batting average and runs batted in for hitters and ERA, wins and saves for pitchers. The team names a figure and argues to the arbiter why the player is worth that much and no more, the player’s representatives argue for a higher figure, and the arbiter decides. The team and player can agree to a contract beforehand, one which will be influenced by what an arbiter is likely to award. There’s one wrinkle: the player always gets a raise. This isn’t a written law, just something that always happens. Even a player who, say, made $5 million in his second year of arbitration but missed all but a few games with injury will make a little more than $5 million the following season, assuming he is tendered a contract.

That brings us to Treinen, Profar and Phegley. In 2018, Treinen had one of the great reliever seasons of all time, securing 38 saves with a 0.78 ERA and 100 strikeouts. In 2019, he earned $6.4 million through arbitration, which would have been a steal for the A’s had he been similarly brilliant, but he was anything but. Treinen more than doubled his walk rate, didn’t have the same strikeout touch, and eventually lost his closing duties.

However, because everyone gets a raise every year in arbitration, the A’s still have to pay for his brilliant 2018, even if 2019 doesn’t add much to the bill. By MLBTR’s estimations, Treinen he will bring in $7.9 million in 2020. That’s fine for a solid reliever, but not one who can’t be trusted with a lead. Without knowing which Treinen will show up in 2020, the A’s likely won’t pay for the risk.

Profar’s case isn’t quite so extreme, but again the A’s would pay for his superior 2018, when he seemed to be putting it all together, more than last season, when Profar struggled to a .218/.301/.410 slash line and seemed to lose his confidence on throws to first. There may still be a good player in there, but it will cost the A’s about $5.8 million to find out. Phegley hasn’t provided too much value as a regular or a backup, but he has hung around long enough to be owed a little over $2 million in his final year of arbitration.

Do the A’s want to spend over $15 million on that lackluster trio? Probably not. It’s likely they’ll non-tender all three, but first they’ll look to find a trade partner to get some value out of them. Each of them, but especially Treinen and Profar, could offer a nice upside play for a rebuilding team with playing time to spare. It’s also easy enough to see a contender rolling the dice on Treinen, in case he rediscovers his abilities from 2018.

There is one more scenario: they could non-tender a player and then sign him back. The A’s did so with Mike Fiers, who they inked to a two-year deal at a lower annual rate than what they’d likely have had to pay through arbitration. Fiers went on to be their best starter of 2019. One could see them going that route with Treinen, if he wants to stick around (though once non-tendered, he is on the open market). That said, the most likely scenario is that all three will be on different teams next season.

Inside The ‘Jurassic World’ Live Tour And Its...

Looking Ahead: Beer Pros Predict The Next Decade...