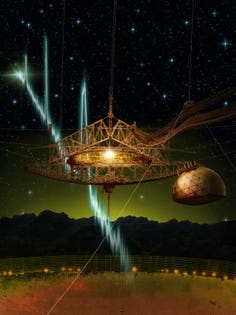 Although our dreams of making contact with an alien civilization have traditionally been rooted in… [+] either a direct visitation or the picking up of an intelligent signal transmitted throughout the galaxy, these remain long-shot possibilities. But real technology may enable us to find worlds where life is abundant and ubiquitous far sooner than we might have expected based on playing this cosmic lottery.

For as long as human beings have looked up at the stars in the sky, two questions have captured our collective imaginations: are there other life forms out there on any of their worlds, and will we ever realize the dream of traveling to one of them? Although both tasks appear to have enormously daunting technical challenges, recent advances in science suggest that not only might humanity be capable of overcoming them, but we might even do so later this century.

While faster-than-light travel and visitations from aliens ⁠— whether benign or malevolent ⁠— are staples of our science-fiction stories, it’s plausible that our real-life scientific advances may legitimately be more profound than any fictional stories humans have dreamed up. On the edge of both frontiers, humanity may be on the cusp of achieving a dream as old as humanity itself.

A logarithmic chart of distances, showing the Voyager spacecraft, our Solar System and our nearest… [+] star, for comparison. If we ever hope to travel across the great interstellar distances, it will require a technology that’s superior to chemical-based rockets.

The biggest problem with the idea of interstellar travel is scale. The distances to even the nearest stars are measured in light-years, with Proxima Centauri being our nearest neighbor at 4.24 light-years away, where one light-year is approximately 9 trillion kilometers: some 60,000 times the Earth-Sun distance. At the speed of the fastest space probes humanity has ever sent on their way out of the Solar System (the Voyager 1 and 2 spacecraft), covering the distance to the nearest star would take approximately 80,000 years.

But all of this is based on current technology, which uses chemical-based rocket fuel for propulsion. The biggest downside of rocket fuel is its inefficiency: one kilogram of fuel is capable of generating just milligrams’ worth of energy, as measured by Einstein’s E = mc2. Having to carry that fuel on board with you ⁠— and requiring that you accelerate both your payload and the remaining fuel with that energy ⁠— is what’s hamstringing us right now.

Position and trajectory of Voyager 1 and the positions of the planets on 14 February 1990, the day… [+] when Pale Blue Dot and Family Portrait were taken. Note that it is only Voyager 1’s position out of the plane of the Solar System that enabled the unique views we retrieved, and that Voyager remains the farthest object ever launched by humanity, but still has thousands of times farther to go until it travels ~4 light-years.

But there are two independent possibilities that don’t require us to dream up Warp Drive-like technologies that would rely on new physics. Instead, we can pursue the routes of either using a more efficient fuel to power our journey, which could increase our range and speeds tremendously, or we can explore technologies where the thrust-providing source is independent of the payload that’s going to be accelerated.

In terms of efficiency, there are three technologies that could vastly outperform chemical-based rocket fuel:

Whereas chemical-based fuels convert a mere 0.0001% of their mass into energy that can be used for thrust, all of these ideas are far more efficient.

All rockets ever envisioned require some type of fuel. Whether a plasma engine, a matter/antimatter… [+] engine, nuclear-powered or conventionally powered, rockets all work on the same principle of thrust, but the efficiencies can vary enormously.

Fission converts approximately 0.1% of the mass of fissile materials into energy; approximately one kilogram of fissionable fuel yields about one gram’s worth of energy, via E = mc2. Nuclear fusion does a superior job; fusing hydrogen into helium, for example, is 0.7% efficient: one kilogram of fuel would yield 7 grams’ worth of usable energy. But far-and-away the most efficient solution is matter-antimatter annihilation.

If we could create and control 0.5 kilograms of antimatter, we could annihilate it at will with 0.5 kilograms of normal matter, creating a 100% efficient reaction that produced a full kilogram’s worth of energy. We could conceivably extract thousands or even a million times as much energy from the same amount of fuel, which could propel us to the stars on timescales of centuries (with fission) or even just decades (with fusion or antimatter).

An artist’s rendition of a laser-driven sail shows how a large-area, light-weight spacecraft could… [+] be accelerated to very high speeds by continuously reflecting back laser light that was high-powered and highly collimated. This could pose the most likely way that human beings have in their near-future arsenal of launching a macroscopic spacecraft over interstellar distances.

On the other hand, we could work to achieve interstellar travel via a completely different route: by placing a large power source capable of accelerating a spacecraft in space. Recent advances in laser technology have led many to suggest that an enormous, sufficiently collimated array of lasers in space could be used to accelerate a spacecraft from low-Earth orbit to tremendous speeds. A highly reflective laser-sail, like a solar sail except specifically designed for lasers, could do the job.

If a large-enough, powerful-enough array of in-phase lasers were constructed, potentially reaching gigawatt power levels, it could not only impart momentum to a target spacecraft, but could do so for a long period of time. Based on calculations performed by Dr. Phil Lubin a few years ago, it’s possible that speeds up to 20% the speed of light could be reached. While we don’t yet have a plan for decelerating such a spacecraft, reaching the nearest star in a single human lifetime is within the realm of possibility.

The laser sail concept, for a starchip-style starship, does have the potential to accelerate a… [+] spacecraft to about 20% the speed of light and reach another star within a human lifetime. It’s possible that, with enough power, we could even send a crew-carrying spacecraft to span the interstellar distances.

By the same token, the search for extraterrestrial life is no longer restricted to either waiting for an alien visit or searching the Universe with radio signals for intelligent aliens, although the latter is certainly still an active scientific field spearheaded by SETI. Although no signals have been found, this remains a stunning example of high-risk, high-reward science. If a positive detection is ever made, it will be a civilization-transforming event.

However, as exoplanet astronomy continues to advance, two techniques that have already been demonstrated could bring us our first signatures of life on other worlds: transit spectroscopy and direct imaging. Both of these involve using the light from a planet itself, with transit spectroscopy leveraging the light that filters through a planet’s atmosphere and direct imaging taking advantage of the sunlight directly reflected off of the planet itself.

When a planet transits in front of its parent star, some of the light is not only blocked, but if an… [+] atmosphere is present, filters through it, creating absorption or emission lines that a sophisticated-enough observatory could detect. If there are organic molecules or large amounts of molecular oxygen, we might be able to find that, too. at some point in the future. It’s important that we consider not only the signatures of life we know of, but of possible life that we don’t find here on Earth.

Transit spectroscopy relies on us having a serendipitous alignment of our observatory with both a target exoplanet and its parent star, but these alignments do occur. Whereas a small fraction of the star’s light will get blocked by the transiting planet, an even smaller fraction of starlight will transmit through the planet’s atmosphere, similar to the sunlight that gets transmitted through Earth’s atmosphere and lights up the Moon (in red) during a total lunar eclipse.

This enables us, if our measurements are good enough, to decode what elements and molecules are present in the target planet’s atmosphere. If we could discover biological signatures or even technosignatures  which could be an oxygen-nitrogen atmosphere, complex biomolecules, or even something like a chlorofluorocarbon (CFC) molecule  we would immediately have a strong hint of a living world that would tantalizingly await confirmation.

Left, an image of Earth from the DSCOVR-EPIC camera. Right, the same image degraded to a resolution… [+] of 3 x 3 pixels, similar to what researchers will see in future exoplanet observations.

Direct imaging could provide exactly that sort of confirmation. Although our first image of an Earth-sized exoplanet likely won’t be very visually impressive, it will contain a ton of information that can be used to reveal indicators of life. Even if the planet itself is just one pixel in a detector, we could not only break its light apart into individual wavelengths, but can look for time-varying signatures that could reveal:

and much more. If there are light-emitting signatures at night, just as planet Earth has our light that illuminate the world at night, we could conceivably even detect those as well. If there’s a civilization out there on a nearby Earth-like planet, the next generation of telescopes might be able to find them.

The Earth at night emits electromagnetic signals, but it would take a telescope of incredible… [+] resolution to create an image like this from light years away. Humans have become an intelligent, technologically advanced species here on Earth, but even if this signal were smeared out, it might still be detectable by next-generation direct imaging.

All of this, together, points to a picture where a spacecraft or even a crewed journey to the stars is technologically within our reach, and where the discovery of our first world beyond the solar system with possible life on it could occur in a decade or two. What was once solely in the realm of science-fiction is quickly becoming possible due to both technical and scientific advances and the thousands of scientists and engineers who work to apply these new technologies in practical ways.

On February 5 at 7 PM ET (4 PM PT), Dr. Bryan Gaensler, director of the Dunlap Institute for Astronomy and Astrophysics at the University of Toronto, will be delivering a public lecture at Perimeter Institute on exactly this topic. Titled Warp Drive and Aliens: The Scientific Perspective, it’s available to watch from anywhere on Earth, and I’ll be following along with a live-blog in real time, below.

How close is humanity to achieving this dream that’s spanned innumerable generations? The answer is closer than you might think, so tune in here and follow along below (updates every 3-5 minutes) to find out what lies just beyond the known frontier. It could be the revolution we’ve all been hoping for!

Live blog begins at 3:50 PM Pacific Time, with all timestamps below shown beginning from that starting point.Source

Huawei Loses Out As Trump And China Agree...