Winners And Losers At The 2020 NHL Trade Deadline 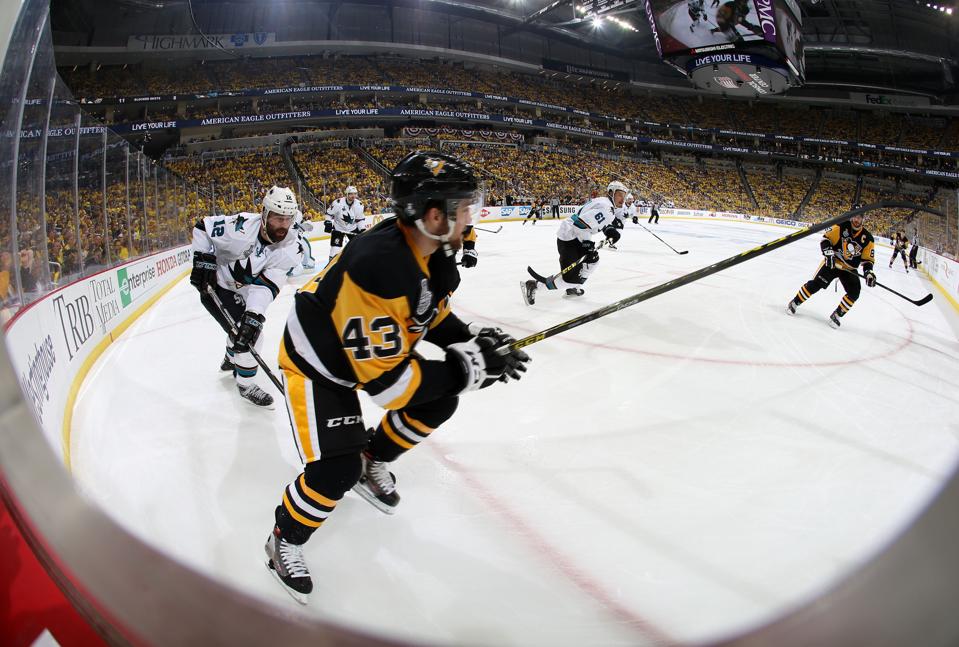 PITTSBURGH, PA – MAY 30: Patrick Marleau #12 of the San Jose Sharks and Conor Sheary #43 of the … [+] Pittsburgh Penguins skate in the corner during Game One of the 2016 NHL Stanley Cup Final at Consol Energy Center on May 30, 2016 in Pittsburgh, Pennsylvania. The Penguins defeated the Sharks 3-2. (Photo by Dave Sandford/NHLI via Getty Images)

With the race to the 2020 Stanley Cup playoffs still wide open, general managers around the National Hockey League got busy on Monday.

When the dust finally settled — hours after the official 3 p.m. ET trade deadline — the league reported that a record 32 deals were completed, involving 28 teams and 55 players.

Only the Minnesota Wild, St. Louis Blues and Winnipeg Jets did not complete a deal on Monday — although all three swung trades earlier this month.

It seems where there’s a will, there’s a way — even in a salary-cap world.

As Wild GM Bill Guerin showed when he got a first-round pick in a package for Jason Zucker two weeks ago, trade season is not limited to deadline-day itself. After dealing away his first-round pick at the last two trade deadlines, Winnipeg GM Kevin Cheveldayoff settled for quieter acquisitions of Cody Eakin and Dylan DeMelo this year. The defending champions in St. Louis stayed conservative as well, adding only blueliner Marco Scandella.

New Jersey Devils’ interim general manager Tom Fitzgerald may have had to settle for a late-round draft pick in exchange for agitating winger Wayne Simmonds, but in addition to securing a tidy package for rental defenseman Sami Vatanen on Monday, he did his best work a week ago when he picked up a second-round draft pick as part of a package for veteran defender Andy Greene and a first-rounder along with high-end prospect Nolan Foote in exchange for hardworking Blake Coleman.

Here’s a look at some of the most notable winners and losers from Monday’s trade activity.

The Golden Knights have been on a roll since Peter DeBoer took over behind their bench on January 15, after the team fell out of a playoff spot. Since then, they’ve gone 10-3-2 and climbed into first place in the Pacific Division.

Last week, general manager Kelly McCrimmon made a couple of slick deals — bringing in a veteran defenseman with a Stanley Cup ring in Alec Martinez and shipping out impending UFA Cody Eakin and his $3.85 million cap hit.

That set the stage for Monday, when McCrimmon executed a complex three-way deal that brought his team some impressive goaltending depth in the form of Robin Lehner.

Winner of the William M. Jennings Trophy and the Masterton Trophy last season with the New York Islanders, Lehner has had another strong year with the Chicago Blackhawks, who were sellers on Monday as they sit eight points out of a playoff spot.

Fleury, now 35, has been among the NHL’s busiest goaltenders during his three seasons in Sin City. Lehner can help share the workload through the stretch run — and offers Vegas a second option if there’s an injury to Fleury.

Kyle Dubas did well earlier this month, when he addressed the Maple Leafs’ goaltending depth and team toughness by acquiring Jack Campbell and Kyle Clifford from the Los Angeles Kings.

But even with defensemen Morgan Rielly and Cody Ceci on injured reserve, fans were clamoring to see impending free agent Tyson Barrie moved for a rich package that would hopefully include a first-round pick, a quality prospect, and a serviceable blueliner who could tide them over until their back end gets healthier.

That didn’t happen. And with Leafs fans still smarting over their team’s loss to emergency backup goalie David Ayres and the Carolina Hurricanes last Saturday, Dubas also failed to make any moves to boost his roster as the Leafs try to hold off the Florida Panthers and secure an Atlantic Division playoff spot.

Some pundits picked the Leafs to compete for a Stanley Cup this season. Without any deadline help, even a postseason berth is far from guaranteed.

Penguins general manager Jim Rutherford likes to take care of trade business early — and he did just that when he brought in Jason Zucker from the Minnesota Wild on February 10. But after a first-round sweep at the hands of the New York Islanders last season, Rutherford kept working. On Monday, he added veteran Patrick Marleau and depth center Evan Rodrigues as well as bringing back Conor Sheary.

Sheary, of course, was part of the Penguins’ back-to-back Stanley Cup teams in 2016 and 2017. Now 27, he’s a known entity who has pre-existing chemistry with Sidney Crosby.

By agreeing to leave San Jose again, Marleau has shown his motivation to take another crack at competing for a Stanley Cup. The 40-year-old was on the losing end when the Penguins beat the Sharks in the 2016 Stanley Cup Final. It’s not hard to imagine him in the Matt Cullen role if the Penguins can make a deep run behind Crosby and Evgeni Malkin this season.

After going all-in at last year’s trade deadline, the Blue Jackets’ main goal this year is just to try to ice an NHL roster as they make their push for the playoffs.

The league’s most injured team this year, the Blue Jackets were missing nine regulars at the trade deadline — many of them long term.

Columbus was rumored to be looking to acquire Andreas Athanasiou for some offensive help on Monday, but got scooped by the Edmonton Oilers. Another rumored deal, for injured power forward Josh Anderson didn’t come to pass, and GM Jarmo Kekalainen had to settle for depth center Devin Shore as the return for mercurial former first-rounder Sonny Milano, who never earned the trust of coach John Tortorella.

When they were led by Artemi Panarin, Matt Duchene and Ryan Dzingel last season, the Blue Jackets got on a roll to make the playoffs and win their franchise’s first-ever playoff round against the league-best Tampa Bay Lightning. On Monday, they added rookie goaltender Elvis Merzlikins and center Riley Nash to their lengthy injured list but still squeaked out an overtime win over the Ottawa Senators to cling to the second wild-card spot in the Eastern Conference.

For these four players, trade-deadline day was new-contract day.

Kreider took himself off the top of the trade-bait list on Monday when he bypassed unrestricted free agency and inked a new seven-year deal, reportedly worth $6.5 million a season, with the New York Rangers.

Muzzin, acquired from Los Angeles by the Leafs just over a year ago, also decided to stay with his current team rather than testing free agency. He inked a new four-year deal worth $5.625 million per season.

Hard-working local boy Pageau was having a career year and leading the Ottawa Senators in scoring. Word was that GM Pierre Dorion very much wanted to keep him, but when that didn’t work out, he did very well in acquiring three conditional draft picks, including a first-rounder, for the one-time fourth-round draft pick.

For his part, Pageau not only landed on a playoff team in the New York Islanders, he quickly inked a six-year contract extension worth $5 million a season that’s a tidy raise from the $3.1 million AAV on his last contract.

Zach Bogosian also maneuvered himself from an also-ran onto a contender. After clearing waivers earlier this month with the Buffalo Sabres, the 29-year-old former third-overall draft pick refused to report to the AHL, leading to a mutual contract termination.

Much like he did when the New York Rangers bought out Kevin Shattenkirk last summer, Tampa Bay Lightning general manager Julien BriseBois swept in. With the opportunity to compete for a Stanley Cup, Bogosian agreed to a $1.3 million contract on Monday and will help solidify the Lightning defense as they look to bounce back from their embarrassing first-round sweep last season at the hands of the Blue Jackets.

Zach Parise and Andrew Ladd have both made big bucks during their NHL careers. But those paycheques can’t satisfy the urge to compete and succeed that lurks inside every professional athlete.

Parise, 35, has five years remaining after this season at a cap hit of just over $7.5 million a season. Ladd, 34, has three years left at $5.5 million a year. Both have been slowed by injuries in recent years, so it was a surprise on Monday to hear that they’d agreed to waive their respective no-trade clauses so they could swap teams.

For Parise, a move to the Islanders would have reunited him with his previous general manager, Lou Lamoriello, who oversaw his most productive seasons with the New Jersey Devils.

Parise has 37 points in 61 games with the Wild this season; Ladd has spent most of the year in the AHL with the Bridgeport Sound Tigers, but was recalled by the Islanders on Monday.

Both players would love to see if they could follow in Ilya Kovalchuk’s footsteps and revive their careers in new settings. But the Islanders and the Wild couldn’t make the details work before Monday’s deadline.

Even though Lamoriello notoriously hates other people knowing his business, don’t rule out the possibility that the deal will be revisited at some point during the offseason.