Home Business With A Win In Its Pocket, Can Arsenal Turn Its Season Around?
Business

With A Win In Its Pocket, Can Arsenal Turn Its Season Around? 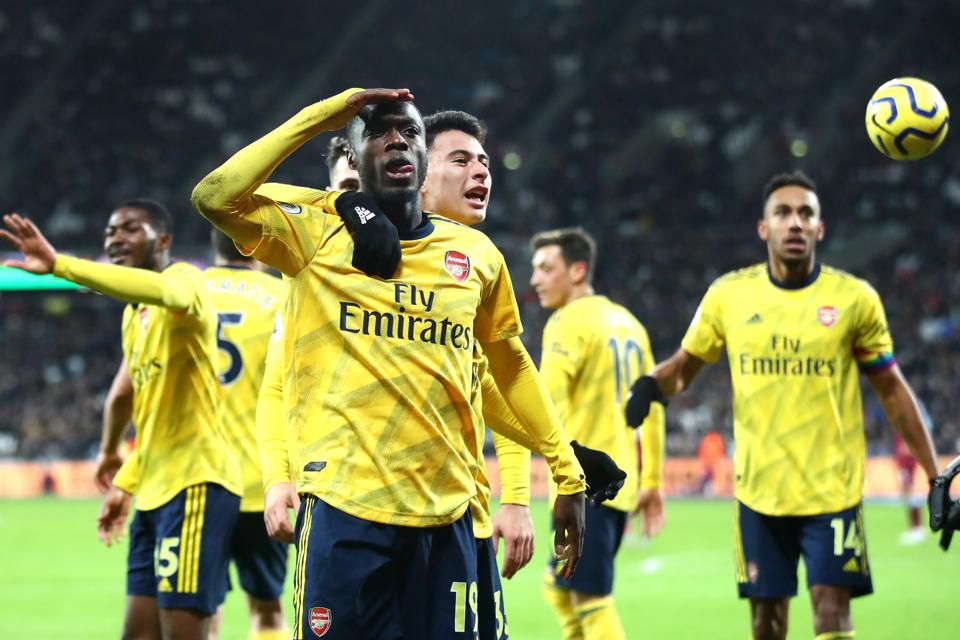 It was beginning to feel like Arsenal may never win again. Coming into Monday’s match with West Ham, the Gunners hadn’t won since a 3-2 Europa League win over Vitória on Oct. 24 and hadn’t won in the Premier League since an 1-0 win over Bournemouth on Oct. 6.

That dreadful run of form ultimately cost Unai Emery his job. The man who replaced him, interim manager Freddie Ljungberg, failed to capitalize with a traditional new manager bounce, drawing his first match in charge 2-2 with Norwich City and losing his second 1-2 to Brighton. Against West Ham on Monday, it appeared another poor result was on the cards as Angelo Ogbonna gave the Hammers a 1-0 lead with a powerful header in the 38th minute. Things looked so dire at that moment, whispers began among the Arsenal faithful about the dreaded “r-word”—relegation.

But for the first time since that months-long losing stretch began, Arsenal showed some fight. And thanks to some positive changes to the lineup from the loss to Brighton—most notably picking Gabriel Martinelli over a struggling Alex Lacazette and starting Nicolas Pepe on the wing—the Gunners scored three goals in nine minutes to win 3-1 and give supporters something to cheer about for the first time in ages. But can Arsenal take this single victory and use it as a spark to turn around its season?

One of the most positive developments to emerge from the match was that the strategy of building play from the back that had failed under Emery and looked on the verge of failing under Ljungberg finally began to come off. All season, Arsenal has been sloppy in its buildup. The strategy is supposed to force defenders onto Arsenal players in their own half, allowing quick breaks into space up the field. But Arsenal frequently find that space, which simply allowed defenders to win possession high up the pitch. But something finally clicked with the Gunners against West Ham, and all three goals were built from the back.

The opener was scored by Martinelli, Arsenal’s breakout player this season, and created by his movement. With Lucas Torreira driving from midfield, Martinelli cut in from the left flank and charged headstrong into the box. His movement created space wide for Sead Kolašinac—only in the squad thanks to a pregame injury to Hector Bellerin and only in the game thanks to a first-half injury to Kieran Tierney—who picked out Martinelli with a perfect cross to nab an equalizer.

Arsenal’s second had more to do with individual brilliance from Pepe than the build from the back, although the build helped put defenders in disadvantageous positions. From the right of the box, Pepe feinted on his defender before unleashing a beautiful, unstoppable curler into the top left corner of goal.

Obviously brimming with confidence from his stunner, Pepe assisted on the third, which featured a fine bit of play between himself and the scorer, Pierre-Emerick Aubameyang. A backheel from Aubameyang and a chip from Pepe on the assist set up a half-volley goal. It was the kind of performance you’d expect to see from Arsenal’s record signing, but the kind we haven’t seen up to this point.

Full credit must go to Ljungberg for the changes to the lineup, who also benched the struggling David Luiz in favor of Callum Chambers. Whatever message he’s sending the players seems to be getting through. Everyone was all smiles following the match, which you’d expect after snapping such a long winless streak, but it’s hard to imagine a similar reaction if Emery were still in charge. He’ll have to do far more than a comeback win over West Ham to put himself in contention for the job on a permanent basis, but having the team looking stable after such a chaotic spell is an accomplishment in and of itself.

But now Ljungberg has his greatest test yet—building on this limited success. A win is nice, but the Gunners will need lots more of them to salvage anything from this season. For the first time in months, though, there’s actually some confidence in the camp. The next step is to turn that confidence into more positive results.

Thankfully for the Gunners, they have a prime opportunity to nab another win this Thursday against Belgian side Standard Liege in the Europa League. Standard still has a chance to qualify for the knockout rounds over Arsenal, holding seven points to the Gunners’ 10, but it trails on goal differential seven to -2. Meaning even if Standard wins, it would have to win by more than nine goals to qualify past Arsenal. Essentially, the Gunners go into the match in Liege with advancement wrapped up. It should be a perfect recipe for a result similar to the 4-0 victory they secured last time against Standard.

The home match against Manchester City the following Sunday will be a much more difficult affair. It’ll be a tough match, and few will expect Arsenal to win, which also makes it a prime opportunity to kickstart the campaign heading into the holiday fixtures. It’s an opportunity to test just how far the team has come in the few weeks under Ljungberg and a chance to set down a marker for the rest of the season. If Ljungberg wants to make a case for himself as the next permanent manager of Arsenal, it’ll need to begin with a victory over City. And if Arsenal wants to fight its way back into the top-four race, that’ll have to begin with a victory over City, too.

Patriots Cheating Scandals Are Always Overblown, At Least According To Confirmed Facts

13 Ways The Average Person Can Build A...