Home Business With Fielding A Concern, White Sox Should Save Their Marriage With Gold Glover Yolmer Sanchez
Business

With Fielding A Concern, White Sox Should Save Their Marriage With Gold Glover Yolmer Sanchez 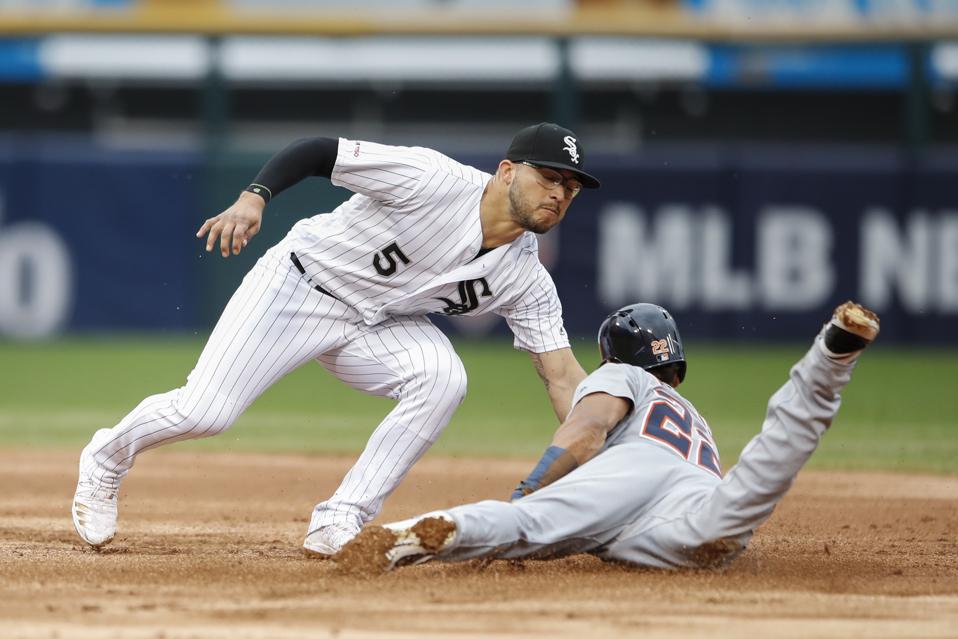 It’s fair to say the White Sox are feeling pretty, pretty good heading toward workouts in Arizona, which for many players will begin within the next week.

Consider Rick Hahn’s answer when he was asked at SoxFest how much he has upgraded the roster with off-season signings and trades.

Hahn is entering his 19th season in the White Sox organization, the eighth since he replaced Ken Williams as general manager. He’s cautious by nature, not cocky. He was saying it is too early to evaluate the impact of Yasmani Grandal, Edwin Encarnaction, Dallas Keuchel, Gio Gonzalez and Nomar Mazara, among others.

If he sounds cocky, it is because he’s added the veteran talent without subtracting any pieces from arguably the deepest collection of age 25-and-under talent in the major leagues. The White Sox strongly believe they’ve developed an inventory of players at the big-league level — included Eloy Jimenez and Luis Robert, who are signed to contracts giving the team control for eight years each — and in the high minors who will allow the team to contend for most of the next decade.

They’re probably right. But there’s one little move they could make for the short-term that could help produce an instant contender in 2020: Re-sign versatile infielder Yolmer Sanchez, who was the American League’s Gold Glove second baseman last year.

Sanchez, 27, was non-tendered before becoming eligible for free agency. He is a four-plus player and estimates had him in line to earn $6 million.

That’s a lot to pay for a career .244 hitter who homers once every 79 plate appearances, especially when you have an impact second baseman in the wings. There’s little doubt that 2018 first-round pick Nick Madrigal will contribute significantly in the near future, possibly as early as April.

Unlike Sanchez, the former Oregon State catalyst is a top-of-the-order bat — an on-base percentage of .371 over 705 plate appearances in the minor leagues — with the speed that could help him score 100-plus runs on a regular basis.

But Madrigal might benefit from spending more time in the minors. Hahn said at Soxfest that he sees utilitymen Danny Mendick and Andrew Romine (signed as a minor-league free agent) as the guys most likely to serve as placeholders for Madrigal.

Mendick, a 22nd-round draft pick from the University of Massachusetts Lowell, earned his spot on the 40-man roster one organizational rung at a time. Sanchez did the same thing before arriving on the South Side in 2014. He was a staple during the three-year rebuild that followed the trades of Chris Sale and Jose Quintana, starting a combined 404 games at second, third and shortstop.

Sanchez received a raise from $2.35 million to $4.625 million as a first-year arbitration-eligible player a year ago. He hoped to build off the recognition of winning a Gold Glove with another big raise but that seems very unlikely to happen at this point. He’s been on the free-agent market almost two months without a deal, which makes this the right time for the White Sox and Sanchez to get back together.

Originally a shortstop, Sanchez impressed former Sox farm director Buddy Bell with his feel for the game when he was a raw teenager recently arrived from Venezuela. There’s room for both him and Madrigal on the roster, as Sanchez is an ideal reserve capable of playing everywhere in the infield.

A Gold Glove fielder is a commodity a team shouldn’t discard, especially when manager Rick Renteria knows his team needs to improve its fielding. Despite Sanchez’s steady play, the White Sox piled up 111 errors last season, tied for the second-most in the AL.

“One of the big things I’m going to be talking about is making sure that we minimize giving away outs,” Renteria said during SoxFest. “And there’s a lot of work that can be done to improve upon that. A lot of it is just confidence, and now it’s going to be awareness of when to try to make a play, when to try to force something, things of that nature.’’

The White Sox are looking at their Opening Day payroll increasing to at least $123 million from $89 million last season. Maybe there’s no payroll space for Sanchez, even at his 2019 salary. But there’s always safety in numbers in baseball. The Sox and Sanchez should find a way to save their marriage before it’s too late.

Keep An Eye On K’Andre Miller, Who May...

How FC Barcelona Is Paving The Way For...