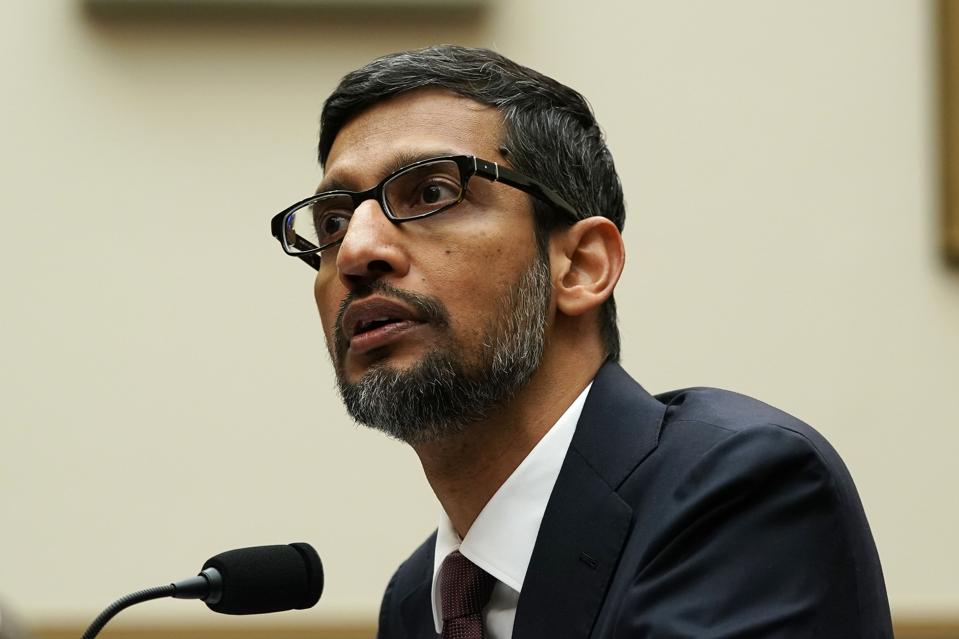 With David Drummond’s exit, Alphabet CEO Sundar Pichai has a chance to reshape the C-Suite and … [+] company culture.

In August, former Google employee Jennifer Blakely wrote a harrowing account of how she was pushed out of her job after having a child with the company’s chief legal officer, David Drummond. Her post confronted “the blatant womanizing and philandering that became common practice among some (but certainly not all) executives, starting at the very top” of the company.

Six months later, that legacy of skewed power dynamics at the highest echelon of the company is starting to fade.

Drummond, whose relationships with employees was being scrutinized as part of a board investigation into the company’s handling of sexual misconduct, is leaving Alphabet as of Friday. Drummond, in a statement to Buzzfeed in August, described himself as “far from perfect” but denied starting a relationship with anyone else who was working at Google or Alphabet (he  reportedly married a current Google employee in September).

After a New York Times article in fall 2018 exposed how the company shielded powerful executives, including Drummond, from claims of misconduct, more than 20,000 workers walked out of offices around the world. Since the walkout, Pichai acknowledged Google’s past mistakes and introduced new policies and procedures for handling harassment investigations. Some employees saw Drummond’s continued role at the company as a proof the company hadn’t really changed.

Drummond was one of the last members of Google’s old guard of influential, early employees and the third powerful figure at Alphabet with a documented history of relationships with coworkers or extramarital affairs to have stepped back in less than a year. Former CEO Eric Schmidt, who reportedly retained a mistress to work as a company consultant and has gained a reputation as a “playboy,” relinquished his board seat in June; Sergey Brin, who had had an extramarital affair with an employee in 2014, gave up his President position in December. (Neither have spoken publicly about their relationships.)

Pichai, who gained day-to-day control of Alphabet when Brin and cofounder Larry Page relinquished their positions in December, now has the opportunity to reshape both the C-Suite and the narrative around company culture.

On Twitter, other current and former employees highlighted the fact that Drummond didn’t receive an exit package when he left, unlike Android founder Andy Rubin, who reportedly received $90 million when he left the company, despite credible sexual assault claims against him (Rubin denied wrongdoing at the time of the report).

“The real question is, why did it take so long?” one former executive who asked to remain anonymous, said of Drummond’s departure. They said that it would take time to see whether Pichai would be able to reshape the company’s internal identity now that he’d shucked the final vestiges of the old executive team.

While he now runs Google and Alphabet, Brin and Page maintain the majority of the company’s voting shares.

Laurence Berland, one of four employee organizers fired in December, was pessimistic on whether the company’s relationship with its workers would meaningfully change.

“Meanwhile, the epidemic of retaliation against workers continues,” he wrote on Twitter.” Whether for organizing or reporting mistreatment, Google isn’t safe for workers. Still a long fight ahead.”

The Week Ahead: A Warning From Small-Cap Stocks?

The Optimist: Designer Henrik Fisker Is Back With A Stylish Electric SUV And Lease-Heavy Business Plan

How Corporates Are Turning To Technology To Make...