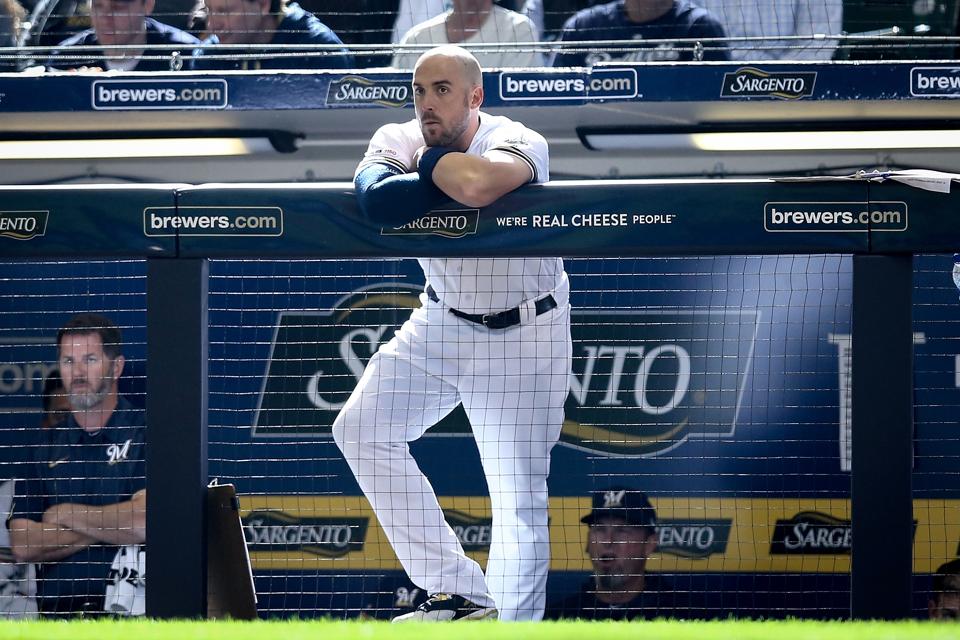 MILWAUKEE, WISCONSIN – MARCH 28: Travis Shaw #21 of the Milwaukee Brewers looks on in the seventh … [+] inning against the St. Louis Cardinals during Opening Day at Miller Park on March 28, 2019 in Milwaukee, Wisconsin. (Photo by Dylan Buell/Getty Images)

After a year in which absolutely nothing went his way, Travis Shaw now has nothing left to do but wait.

Major League Baseball teams have until 7 p.m. CST to tender players eligible for arbitration a 2020 contract and the Milwaukee Brewers third baseman could be looking for a job when that deadline passes.

It would have been hard to imagine such a scenario just a year ago after Shaw, in his second season with the Milwaukee Brewers, clubbed 32 home runs and drove in 86. His average dropped from .273 to .241 but he still finished with a respectable .825 OPS — though that, too, dropped from .862 a year earlier.

Still, Shaw stood to benefit from being able to play third base every day when Mike Moustakas agreed to slide over to second after signing a one-year deal to return to Milwaukee. Shaw, in spring training, spoke of his interest in a potential extension to remain with the Brewers, who’d acquired him in a trade from Boston two years prior.

That talk faded quickly once the season began as Shaw couldn’t find his stroke. He slashed .194/.282/.347 through the first month and was batting just .163 with 4 home runs and 8 RBI when he landed on the injured list with a sore right wrist on May 14 — an injury that resulted in a minor league rehab assignment with Triple-A San Antonio.

Milwaukee recalled Shaw on June 4, a controversial move that also saw top prospect Keston Hiura returned to the minor leagues despite an impressive debut. Shaw didn’t fare much better upon his return, batting .167 (8-for-48) with 2 home runs and 19 strikeouts in 17 games, and was sent back to Triple-A on Aug. 9.

After returning to the big leagues again on Aug. 31, Shaw was a non-factor down the stretch, appearing in 21 games but starting only seven and batted just .121 with a home run, three RBI and a .522 OPS in 42 plate appearances.

“Travis had a really rough year and he’d be the first person to say that,” Stearns said at his end-of-season press conference. “I know he was not pleased with his performance this year. He believes he’s a better player than that. I certainly believe he’s a better player than that. We’ve seen that from him previously. We’ve seen a player who can contribute at a really high level consistently over multiple years.

Working against Shaw, more than anything, is his salary. He earned $4.6 million last season after being arbitration-eligible for the first time. By rules, the Brewers can make a 2020 offer with a pay cut of no more than 20 percent of that salary, meaning the minimum they could offer him is $3.74 million. He could decline that offer and continue negotiating with the Brewers and if that fails, take his chances in an arbitration hearing.

But while payroll will certainly be one concern, there are a few factors that make a return likely.

For starters, Stearns also doesn’t have much in terms of alternate options. The Brewers are almost certain to try and bring back Moustakas on an extended deal but should that not work out, the internal options aren’t overly impressive — or plentiful.

The top third base prospect in Milwaukee’s farm system, Lucas Erceg (No. 14 according to MLB Pipeline) stumbled last season with San Antonio, where he batted .218 with 15 home runs, 52 RBI and a .703 OPS while striking out 102 times in 116 games.

Luis Urias, acquired last week in a trade with San Diego, could be an option.

Though primarily a middle infielder — just one of his 80 big league appearances have come at third — he does have 66 appearances at the hot corner in the minor leagues and could get at least a cursory look in spring training.

Lastly, the new roster rules for 2020 give teams an extra spot and as a left-handed power hitter who can play both corner infield positions, the Brewers might be willing to take a chance on Shaw bouncing back and returning to form.

For now, though, Shaw will wait and see … as will Milwaukee’s other non-tender candidates:

Shortstop Orlando Arcia was once the franchise’s most highly-touted prospect since Ryan Braun but has struggled with inconsistency at the plate for the last two seasons and also showed signs last season of slipping defensively — a trait long considered Arcia’s strength and one that made it possible to overlook any offensive shortcomings. The chances of Arcia being non-tendered are slim but Milwaukee’s acquisition or Urias last week certainly put the 25-year-old on notice.

RHP Junior Guerra was the first player acquired by Stearns after he officially took control of Milwaukee’s baseball operations. The veteran whose career included a PED suspension and several years playing in unaffiliated baseball — including a stint in Italy — was an unsung hero in the Brewers’ bullpen last season (9-5, 3.55 ERA, 3 saves, 72 appearances) stands to earn around $3.5 million in arbitration — a high price to pay for a 35-year-old who’s been around the block and then some during his career.

LHP Josh Hader has been as dominant as it gets since being called up to the big leagues but is now in line for a hefty raise as a “Super-2” player eligible for arbitration. The chances of Milwaukee non-tendering Hader, 23, are minimal but rumors have circulated recently that the team is willing to listen to offers from interested parties.

RHP Jimmy Nelson has been through hell and back while rehabbing from surgery on his right shoulder in Sept. 2017. He missed all of the 2018 season rehabbing and after finally returning to the mound in 2019, looked very little like the pitcher who Milwaukee once considered a future ace. Nelson went 0-2 with a 6.95 ERA in 10 appearances, including a 9.75 ERA in three starts. Nelson, 24, earned $3.7 million in 2019 and is eligible for arbitration for the third time.

INF Tyler Saladino was supposed to provide competition for Arcia but did next to nothing in 28 games, batting .123 with 2 home runs — both of them grand slams — and 8 RBI. He earned $513,000 a year ago but is eligible for arbitration for the first time.

Is Remote Working Just Another Fad Or Actually...

How And Why You Must Vet An Event...

This Founder’s Story Will Inspire You