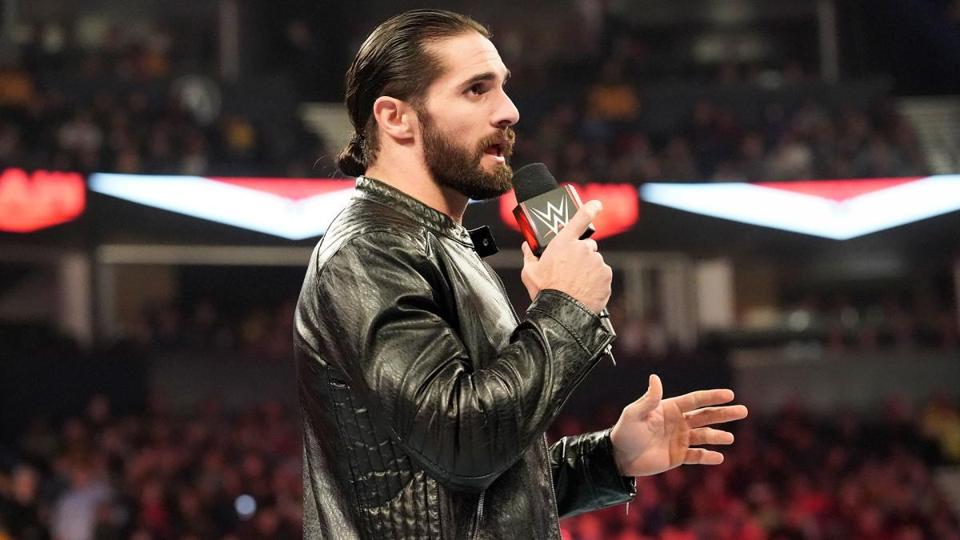 Seth Rollins issued an apology to kick off Raw.

Raw also saw Lashley and Lana arrested and sent to prison, while The Kabuki Warriors defeated Charlotte Flair in one of the better two-on-one matches you’ll ever see.

Last week’s edition of Raw drew its second-lowest non-holiday viewership in history. Up against a Monday Night Football game between two of the NFC’s best teams, as the Minnesota Vikings take on the Seattle Seahawks, Raw could be in for another historic low.

Kevin! Seth is wearing black! Don’t accept his apology, you can’t trust him.

For lack of a better word, it appears Seth Rollins issued a retraction for last week’s statements.

Between Lashley and Seth Rollins, nobody wants to admit they have anything to do with AOP.

Police arresting heels will never not get a massive pop in WWE.

Nobody sells a beating better than Akira Tozawa, and few big men have better offense than Drew McIntyre, so this was a fun squash.

Let the record show that Drew McIntyre’s feud with Randy Orton is over a chop, prompting the possibility of the two to do battle this December in a Tables, Ladders and Chops match.

Drew McIntyre considers Randy Orton the past yet the two are only five years apart and had everything gone according to plan for McIntyre back in 2009, the two would be peers by now.

I got so excited at the possibility of a Randy Orton-Drew McIntyre feud, I forgot he was supposed to be feuding with Ricochet.

When Aleister Black has matches against WWE Superstars who didn’t formally knock on his door to request a fight, the matches feel that much more random.

God love Tony Nese but it took far too long for Aleister Black to put him away.

Nobody looks more like a newborn baby than a bald Eric Young.

Vic Joseph noted Samoa Joe and Eric Young are familiar with one another, which is WWE speak for “you guys used to wrestle for TNA.”

Jerry Lawler that the Canadian Eric Young was wrestling in front of his hometown crowd in Nashville.

If R-Truth, as WWE 24/7 champion, is going to make the mistake of trusting anybody, he simply has to live with the consequences.

Seth Rollins is taking his own sweet time turning heel, meanwhile Jerry Lawler wasted no time burying No Way Jose during his entrance.

What’s to stop No Way Jose’s entourage from holding off Erick Rowan while at least one of them unveils his creature? There’s so many more of them!

The Kabuki Warriors vs. Charlotte Flair

WWE is stingier with its pyro than good parents are with candy.

It would have made my night if Charly Caruso understood every word of Asuka’s promo and asked a follow-up question in Japanese.

It took a while, but The Kabuki Warriors finally received their own unique theme music.

Samoa Joe referred to The Kabuki Warriors as mini Terminators, which is actually a superior name for their tag team.

That might have been the best two-on-one match I’ve ever seen in my life.

Throughout this match, The Viking Raiders kept screaming “are you watching?!” With a competitive Monday Night Football game between two playoff-caliber teams, I think we all know the answer to that question.

WWE’s Twitter feed issued a poll asking its fanbase which team would win this match. As of this writing, 25% of its fans selected Sterling and Lyons. Freaking trolls.

If it weren’t for Rey Mysterio, the babyface team would exclusively exist of guys whose careers suffered because they couldn’t get past AJ Styles.

Samoa Joe has been so good on commentary, even when he says WWE cliches they sound cool.

This match had more than enough action to not only keep a tired crowd awake, but make them go nuts before the end.

AJ Styles has quietly had a dominant win-loss record in 2019.

Rewatching ‘The Witcher’ On Netflix? Use This Handy...

The Lack Of Women In Leadership In Sports...

Wall Street Rebounds From Earlier Sell-Off, Even As...