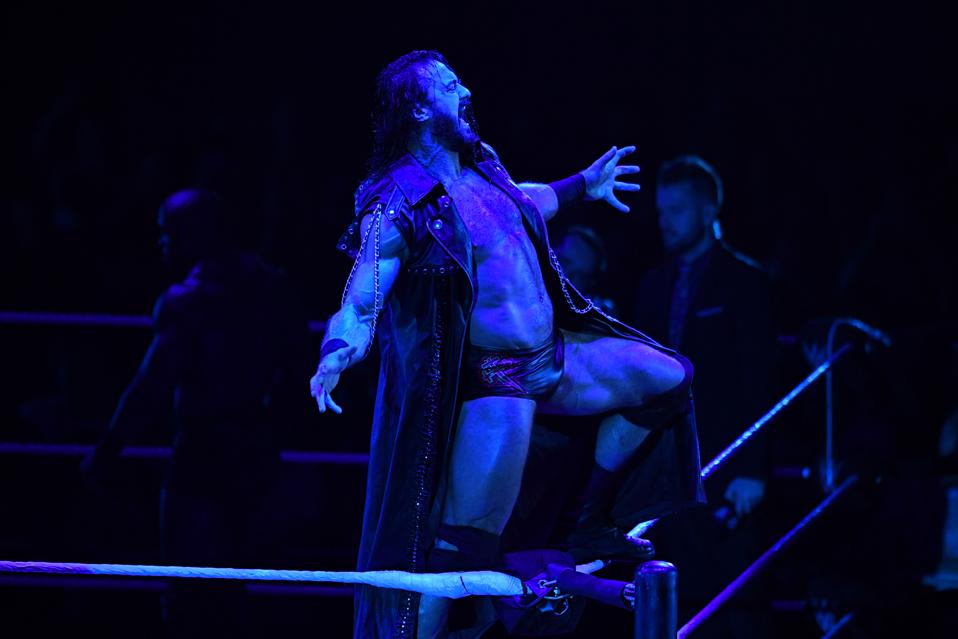 The 2020 Royal Rumble gave sports fans a nice diversion on a tough and tragic day.

Hours after the sports world was rocked by the tragic passing of Kobe Bryant, his daughter and others in a helicopter crash, WWE delivered a timely tribute and a solid show.

Here is a breakdown and grade for each match on Sunday at Minute Maid Park in Houston, Texas.

It was obvious Sheamus would go over in this match, but it was a lot better executed than I expected. I’ve long been a fan of Shorty G’s skills in the ring, even though his current gimmick is horrible.

After a good amount of back-and-forth action, Sheamus destroyed his diminutive opponent with a Brogue Kick to secure the pinfall. Sheamus is going places in 2020, but I’m afraid Shorty G is going to be trapped in this insignificant role.

Still, this was pretty strong for a pre-show match.

This match was solid, but for some reason, these two just don’t have the same chemistry as Andrade and Rey Mysterio. Carrillo is athletic, but he’s still trying to find an identity in the ring.

That’s a missing element if he is going to be able to carry his weight in a feud with someone like Andrade who can’t sell a story with his mic work. Aside from a few spots, this could have easily been a match on Raw, there was nothing particularly memorable.

It wasn’t a bad match, but there was no magic.

Wow! What a good match.

I haven’t been the biggest fan of this feud, but boy did these guys deliver in the opening match for the main card.

Too often we see these gimmick matches fail to live up to the stipulations and hype. That wasn’t the case here as Reigns and Corbin, with help from The Usos, Robert Roode and Dolph Ziggler, battled throughout Minute Maid Park.

The fight spilled into the equipment area, and even on top of the dugout. That’s where the match ended as Reigns hit a spear on Corbin to secure the three count.

The booking for this Rumble was mostly strong. Unlike many other members of the media, I didn’t have an issue with Charlotte winning the Rumble.

More than that, the eliminations made sense for the present and future of the talent involved. Most importantly, at least from a fan standpoint, any of them were exciting to watch.

Bianca Belair entered the match at No. 2, but was one of the biggest standouts overall. She tallied a massive eight eliminations before being eliminated by Flair late in the match.

Mighty Molly, Kelly Kelly and Beth Phoenix were the returning legends. Phoenix was among the last remaining stars in the ring, but was ultimately eliminated by Shayna Baszler, who drew No. 30, but not before turning on her long-time friend Natalya. Phoenix also suffered a laceration on the back of her head that left her golden locks stained with blood.

Like a warrior, she soldiered through and delivered an excellent performance.

Baszler came in as the favorite to win, despite not being a confirmed entrant. She made quite the splash with eight eliminations of her own. However, she was thwarted by Charlotte in the end as a head scissors led to the elimination.

Naomi returned from injury and put on her now seemingly annual display of athleticism to avoid elimination. Unfortunately, she was quickly eliminated by Baszler after getting back into the ring.

For comic relief, Santino showed up in one of his old gimmicks as Santina Marella. Ultimately, he’d eliminate himself when faced with taking on Beth and Natalya. On that same note, the awesomely charming angle with Mandy Rose and Otis continued.

The big man saved his crush from being eliminated by laying on the floor to break her fall as she was thrown over the top rope.

Overall, the match was enjoyable and filled with solid suspense. Expect additional layers added before WrestleMania because it’s doubtful Charlotte will simply challenge Becky or Bayley for their titles.

Here is a look at all of the entries and the eliminations.

After an exciting Women’s Rumble, this was quite the letdown. The match felt abbreviated and the ending didn’t match or properly culminate the conflict the two women have had in the past few weeks.

Bayley secured the victory as she grabbed the tights during a roll-up pin. This one didn’t scratch any sort of itch. If anything, it made a borderline compelling feud less interesting.

Thankfully, we didn’t have to watch this match through that ridiculous red light. Also, the booking was a bit better than some of the other Fiend matches.

In the end, The Fiend retained, but Bryan was still allowed to mount some solid offense. He landed two Running Knees, and got a two-count, but a Mandible Claw Chokeslam secured the pinfall.

Also, this was the best booking I’ve seen for a Strap Match. Usually, there is far too match pandering to the strap, and not enough wrestling. That wasn’t the case in this one as there was about as much done in the way of running and leaping moves as possible considering the two men were adjoined by the strap.

The Fiend going over was the only logical booking decision, and since we’ve already seen advertising for an Inferno championship match against Kane, it was clear he’d retain.

I’m not sure these two have the right combination of athleticism and chemistry to have a classic match. Lynch has never been especially dynamic in the ring, thus she needs a certain kind of opponent to look her best.

Unfortunately, Asuka’s style doesn’t exactly fit the bill. That said, the culmination of the match was strong. After a scramble and referee mix-up, Asuka was prepared to use the Green Mist. However, Lynch landed a reverse sidekick that caused Asuka to spit the mist in the air.

Lynch used the opportunity to lock in the Dis-Arm-Her and Asuka tapped out. Aside from the ending, there wasn’t much that was memorable in this match.

My feelings for the men’s Rumble went up and down like a seesaw, but in the end, I loved the booking. Brock Lesnar entered at No. 1 and he dominated everyone that came into the ring.

Elias, Erick Rowan, Robert Roode and even John Morrison were unceremoniously eliminated by Lesnar. I started to worry that he was being booked too strongly, but this was just the beginning of the dominance.

He’d pull off impressive eliminations of Kofi Kingston, Rey Mysterio, Big E, Cesaro, Shelton Benjamin, Shinsuke Nakamura, and the returning MVP. At this point, it appeared the fans at Minute Maid Park were getting a bit testy.

You could hear the boos from the crowd, and it wasn’t positive heat. Next up, fast-rising NXT star Keith Lee entered, and he seemed to match Lesnar as he avoided a quick elimination. He stayed in long enough for Braun Strowman to make his way to the ring, and it appeared the real match was set to begin.

There was some solid action between the three, but ultimately Lesnar would score a double elimination to again remain the only man in the ring. Yes, the testiness from the fans had turned to disdain at this point.

When Ricochet’s No. 15 was called, it seemed like we were in for more of the same. After taking some punishment, but remaining in the ring, Ricochet bided his time in the corner until Drew McIntyre’s No. 16 was called.

As Lesnar’s back was turned, Ricochet kicked the Beast in the nether regions and that set up a Claymore from McIntyre that sent the WWE Champion over the top rope.

With Lesnar eliminated, it was as if a second Rumble match had begun.

WWE Hall-of-Famer Edge would return at No. 21 rocking his signature long golden hair style. He looked to be in great shape and he performed well throughout. In fact, he wound up being one of the last three men in the ring.

Seth Rollins entered at No. 30 and he brought Buddy Murphy and AOP with him to the ring. However, the trio got into a brawl with Samoa Joe, Aleister Black and Kevin Owens after they were eliminated which cleared the ring area.

The remaining stars in the ring then attacked Rollins before McIntyre eliminated them. In the end, Reigns eliminated Edge as both men hung from the ring apron, and McIntyre finished off the Big Dog after another Claymore.

It was the right ending, and the correct booking, even though there were some worrisome points earlier in the match.

Here is a look at all of the entries and eliminations.

There were only a few dead spots in the show as most of the major matches delivered. Both rumbles were great and the Falls Count Anywhere match was the best of the rest.

With Fielding A Concern, White Sox Should Save Their Marriage With Gold Glover Yolmer Sanchez