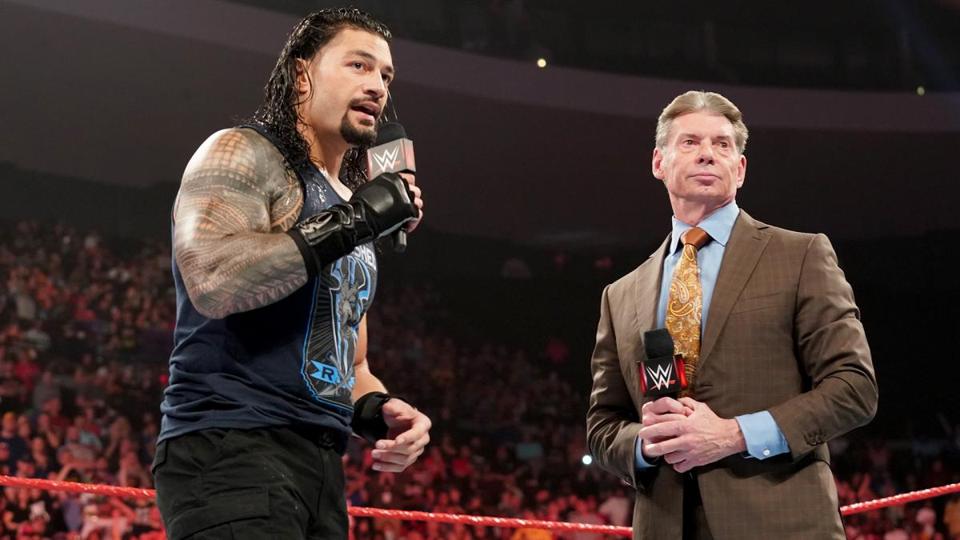 WWE could be building toward a blockbuster main event at WrestleMania 36.

At this point in the year, WWE fans usually have a pretty good indication of what the following year’s WrestleMania main event will be, but this year, there are a handful of choices that could realistically headline WWE’s flagship pay-per-view.

All of the changes brought upon by the recent WWE Draft and the world title victories for both Brock Lesnar and Bray Wyatt have made it much less clear which blockbuster match will headline WWE’s biggest pay-per-view of the year in 2020. Last year, WWE made history when Becky Lynch vs. Ronda Rousey vs. Charlotte Flair became the first-ever women’s match to close out WWE’s flagship pay-per-view, and this year, two of those three stars might very well get a chance to do it again.

According to early betting odds from Sky Bet (h/t Oddschecker), Rousey vs. Lynch has the third best—and once had the second best—odds to headline WrestleMania 36 in Tampa, Florida next April. The only match to initially have better odds? Well, that would be The Rock vs. Roman Reigns in what would undoubtedly be one of the biggest matches in WWE history. Other possible WrestleMania main events with favorable odds include Brock Lesnar vs. Cain Velasquez and a four-way dance between WWE’s Four Horsewomen of Lynch, Flair, Bayley and Sasha Banks.

Of all of those aforementioned bouts, the one WWE would undoubtedly hold out the most hope for is The Rock vs. Reigns. There has been all sorts of speculation that The Rock would love to face Reigns on the grandest stage of them all, and with The Rock expressing a desire to step back into the ring again, Reigns would be the most obvious–and probably the best–opponent for him. In 2017, The Rock actually named Reigns as one of three stars he’d like to face–along with Lesnar and Triple H–if he did wrestle again, and Reigns has made it clear that he’d like to take on The Rock as well in what would be one of the biggest possible matches WWE could do at this point.

In fact, WWE reportedly had considered a bout between The Rock and Reigns at WrestleMania 35, but Reigns’ unfortunate cancer diagnosis threw a major wrench into those plans. Now that Reigns is back, fully healthy and one of the most universally loved babyfaces in WWE, a potential clash with The Rock would likely be a major draw for the company, and WWE itself has actually teased the match as a possibility for WrestleMania 36 even though The Rock himself has said that he has already “quietly retired” from WWE. Of course, in pro wrestling any retirement could change in the blink of an eye, and though The Rock has a famously busy schedule that his prevented him from wrestling a full-fledged match for more than six years, the huge audience WWE drew for his appearance on SmackDown’s FOX debut just goes to show you the type of drawing power he has.

There isn’t a star on his level in WWE, which explains why many of the early WrestleMania 36 main event frontrunners involve at least one part-time name.

The odds seem to indicate that Lynch vs. Rousey has a strong chance of headlining the show, and indeed, one report notes that WWE is “tentatively” planning on doing the first-ever singles matches between “The Man” and “The Baddest Woman on the Planet” at WrestleMania 36. That’s because Rousey is widely considered to be WWE’s biggest draw while Lynch has been WWE’s most popular star over the past year, making this match an obvious candidate to headline WrestleMania given that their feud never really got any closure because Rousey left WWE immediately after their historic triple threat match at WrestleMania 35. Lynch has made it clear that she still wants a singles match with Rousey, and even though Rousey’s WWE return was described as “imminent” earlier this year, it still hasn’t happened as of yet. So, WWE has penciled in Lynch vs. Shayna Baszler as its Plan B in the event that there is no Rousey, which explains why Baszler is now the clear betting favorite to win the women’s Royal Rumble.

The reality that Rousey may not be around for WrestleMania might make the aforementioned Velasquez vs. Lesnar match a stronger candidate to headline WrestleMania 36 match. Although that match just happened at Crown Jewel and one report suggests it won’t happen at WrestleMania after all, that Crown Jewel bout was kept short because Velasquez was injured and needed surgery, so the widespread belief is that the two former UFC stars could have a “rubber match” at WrestleMania 36 after Velasquez defeated Lesnar in UFC way back in 2009. That’s an easy story to tell and one that WWE may seriously consider because Velasquez signed a long-term deal with the company and is making the full transition to pro wrestling. In fact, another recent report states that Lesnar will likely face either Velasquez or Tyson Fury at WrestleMania 36, and as a bout between two major crossover stars, you just know WWE would love to make that the show’s main event.

The most obvious potential WrestleMania 36 main event would be Roman Reigns vs. Bray Wyatt for the Universal title, a match that is reportedly set for the pay-per-view and could result in Reigns winning the Royal Rumble. That match itself could be very good but seems like an obvious choice to headline the show and may result in serious fan backlash toward Reigns, who has become an overwhelming fan favorite since returning from his courageous battle with cancer.

As of right now, it’s no surprise that these aforementioned matches are standing out above the rest of the pack as potential WrestleMania main events because there are, realistically speaking, probably fewer than 10 stars who have a legitimate shot at headlining WrestleMania. Reigns taking on The Rock could be a fantastic story as could Lynch vs. Rousey or Baszler, while WWE demonstrated at WrestleMania 35, Survivor Series and TLC that it has no problem putting female superstars in the main event slot at a major pay-per-view. Lesnar vs. Velasquez would continue WWE’s trend of focusing heavily on part-timers at WrestleMania 36, and Reigns vs. Wyatt, which may already be penciled for the show, would seemingly give Reigns his best chance at main eventing his fifth WrestleMania.

Of course, it would take a lot of dominoes falling the right way for any of these matches to happen at WrestleMania 36, but with no obvious favorite to do so, all of these bouts have as good of a chance at headlining the show as any others do.

How A StartUp Filled An Emotional Need And...