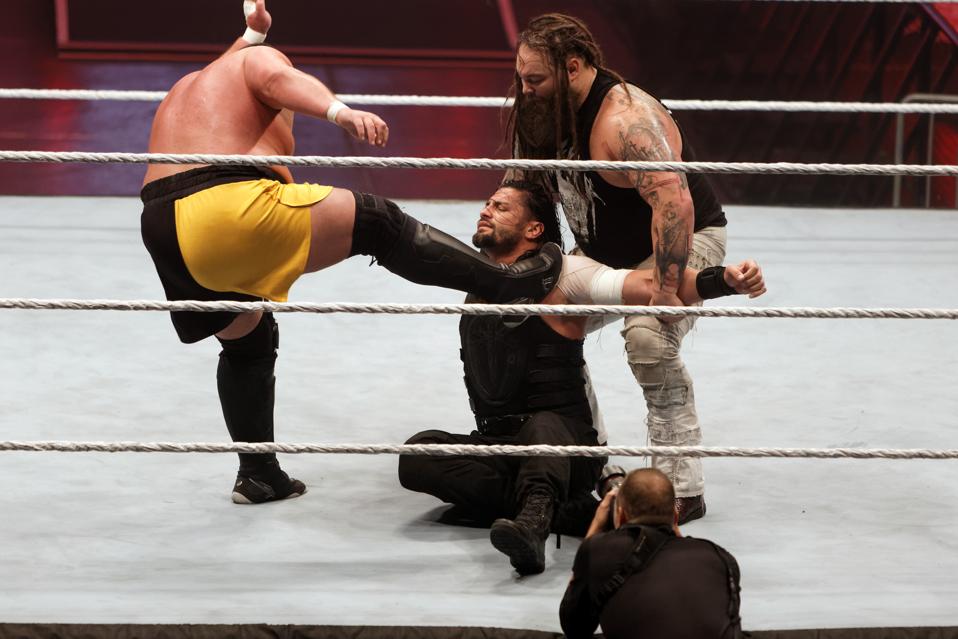 It’s unlikely Seth Rollins and AOP’s destruction of Samoa Joe will be as inconsequential as Brock Lesnar’s massacre of Dio Maddin. Back in November, Lesnar landed an F5 on Maddin, putting him through the announcer’s table, after he came to the defense of Jerry Lawler on an episode of Raw.

That beatdown was reportedly executed as a way to get Maddin off the Raw commentary team, and to allow him to head back to the WWE Performance Center where he can continue to hone his craft as an in-ring performer.

After all, he is 6’7”, close to 300 pounds and only 26 years old. There’s potential there for him to become a valuable member of WWE’s roster. Maddin was replaced at the commentary table by Samoa Joe, who was smashed by Akam and Rezar at the command of the recently heel-turned Rollins.

The attack happened after AOP interfered with Rollins and Mysterio’s U.S. Title Match.

Mysterio retained the title via disqualification, but he lost the belt on Thursday night in New York at a house show. He might be headed for a hiatus, or at least, it doesn’t appear as though Mysterio is currently aligned with Rollins for the time being.

Joe isn’t believed to be done as an in-ring performer, and he’s also reportedly a favorite of Paul Heyman, who has assumed some level of control and influence over the creative team for Raw. Joe is over with the WWE Universe as a heel or face, and his current persona is clearly the latter.

Rollins isn’t currently a champion, or in a title chase, but he’s still considered one of the promotion’s top stars. The attack on Joe is the perfect seed for a feud that could last for a few months, perhaps even into WrestleMania. Joe possesses the skills on the mic to keep the program interesting, despite the lack of championship connection.

As of now, Rollins doesn’t have a foe lined up for Royal Rumble, and considering recent developments, Joe looks to be the guy who best fits the role.