Breaking
Boston Globe Starting “Fresh Start” Initiative As Part...
Can Money Protect You From Covid-19? It May...
The Most Important Voice In Artificial Intelligence: Frontline...
Amazon’s Small Business Empowerment Team Is Helping Entrepreneurs...
10 Ways For Entrepreneurs To Power Through Tough...
Will The Cloud Take Down The Mainframe?
How Itamar Medical Stock Could Triple
How To Cash In On Biden’s Stimulus With...
The Refactoring X-Factor Behind Software Modernization
3 Habits Of Millionaires
Will The Stock Market Sell Off As Biden...
Microsoft Reverses Xbox Live Gold Price Increase Following...
Weekend Favs January 23
FDA Approves First Monthly Injections To Treat HIV
Low Volatility Investing Works In China Too
How 2020 Introduced Big Technology Startup Opportunities
Home Business 1 In 4 YouTube Coronavirus Videos Had Bad Information—Long Before Plandemic
BusinessTechnology 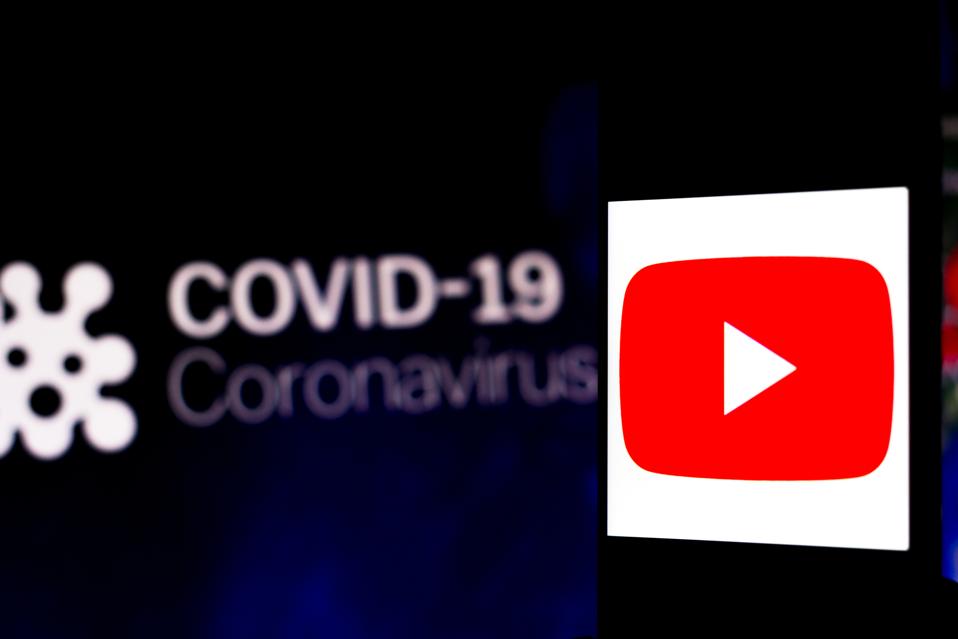 BRAZIL – 2020/04/05: In this photo illustration the Youtube logo seen displayed on a smartphone with … [+] a computer model of the COVID-19 coronavirus in the background. (Photo Illustration by Rafael Henrique/SOPA Images/LightRocket via Getty Images)

The conspiracy theory video Plandemic turned the whirlwind of misinformation circulating about the coronavirus into a EF5 tornado of falsehoods, conspiracies and overall dangerous public health information a few weeks ago. But more than a month before Plandemic, and even before the World Health Organization (WHO) declared the public health emergency a pandemic, videos with false or misleading information were racking up tens of millions of views on YouTube, according to two recent studies. Since then, the proliferation of videos with false, misleading or harmful information about the COVID-19 pandemic has only intensified, despite various social media companies’ attempts to rein them in.

These research findings aren’t surprising — misinformation flourished on YouTube during the H1N1, Ebola and Zika epidemics as well, and anyone who has spent time looking at health videos on YouTube has undoubtedly come across conspiracies and other whoppers. But the findings also reveal missed opportunities for government, university and other public health agencies to communicate accurate, helpful information on a popular platform where millions of people seek health information.

The first study, published in Global Public Health, found a lower percentage of misleading videos—about 1 in 11 videos — than the second one, but it also assessed videos in the earliest days of the coronavirus’s spread, up until the day after it was declared a pandemic. The second study, in BMJ Global Health, found that more than a quarter of videos the researchers assessed gave non-factual information. And even then, their study ended in mid-March.

Most Videos Before Pandemic Declaration Had Accurate Information

In the earlier study, researchers searched YouTube with the keyword “coronavirus” and combed through the 113 videos related to COVID-19 with the most views from the first one, on January 21, through March 12, the day after the WHO declared COVID-19 a pandemic. They began with the 150 English-language videos with the highest view count and excluded duplicates, music videos and videos without audio.

To be one of the 70% of videos they found to be “useful,” the video needed to include scientifically correct information on any part of COVID-19, including how it spreads, symptoms, testing, treatment or outcomes. The 9% of videos considered “misleading” had a least one scientifically unproven statement. The other 21% of videos were neither useful nor misleading.

Despite the majority of useful videos, only 12% of all the videos were considered comprehensive by addressing most key aspects of the disease (and one of them was misleading). Most concerning was that just one video came from the WHO (considered “useful”), and none came from the Centers for Disease Control and Prevention (CDC). The two leading health organizations on the planet were all but absent from YouTube views on the biggest public health emergency of the century. With that big a missed opportunity, it’s not that surprising that later conspiracy videos filled the gap.

“Academic medical hospitals and centers should recognize YouTube as an important platform to convey accurate medical information, particularly during epidemics and pandemics,” the authors wrote. “If these credible organizations fail to utilize multimedia platforms for information delivery, independent users may potentially take advantage of these platforms to conduct their own agenda, potentially affecting public knowledge of COVID-19 and worsening public anxiety during this pandemic.” See Exhibit A: Plandemic.

More Than 1 in 4 Later Videos Had False Information

The second study looked for the most popular videos on a single day, March 21, by which time most states had just recently issued shelter in place guidelines or similar restrictions. The researchers similarly searched for the most viewed English-language videos about the pandemic: the top 75 videos using the keyword “coronavirus” and the top 75 using “COVID-19.” After excluding duplicates, non-audio-visual or live videos, and those unrelated to COVID-19 or over an hour long, they identified 69 videos with more than 257 million total views.

The researchers used a pre-defined rubric for assessing the accuracy of information in the videos, with videos receiving one point for scientifically correct information on each of the following: COVID-19 symptoms, how it’s transmitted, prevention strategies, potential treatments and its epidemiology, or which populations it affects and how it moves through those populations.

More than one in four videos, 27.5%, contained false information, and those videos had more than 62 million combined views. They also made up about a quarter of all viewership and came from entertainment news, network news, internet news and independent consumers.

An example of the incorrect information included in these videos were claims that the coronavirus “only affects immunocompromised, cancer patients and older people”—in reality, it can and has killed people of all ages. Other videos made false claims about stronger strains in other countries, encouraged irresponsible hoarding behavior or incorrect health advice, contained racist or discriminatory statements, or promoted conspiracy theories, such as the world being controlled by a cult.

“While the power of social media lies in the sheer volume and diversity of information being generated and spread, it has significant potential for harm,” the authors wrote. “The proliferation and spread of misinformation can exacerbate racism and fear and result in unconstructive and dangerous behavior.”

Although government and professional videos had the most accurate and thorough information, they made up only 11% of the videos, and only 1 in 10 viewers saw these videos. Again, the authors pointed out this missed opportunity: “YouTube is a powerful, untapped educational tool that should be better mobilized by health professional to control information and influence public behavior.”

The author recommended that public health institutions use the same strategies that make other videos successful, such as incorporating emotion or humor into their videos or partnering with celebrities.

These studies are aimed at other researchers and at public health agencies, but their findings have important implications for everyday people seeking accurate information during the pandemic. YouTube is not an ideal source for information. If you are going to seek information there, make sure it comes from institutions who are relying on scientifically accurate sources.

It’s worth pointing out that 24% — about one in four — of the misleading videos came from network news stations. TV news is also often an unreliable source for news. Getting most of your news from television is like getting most of your calories from sugar: a little bit in moderation is fine, but too much is unhealthy and harmful.

Think of your news diet like an actual diet: you need variety and you need meat or some other kind of protein. If you want to get information from network news—no matter what channel it is— and blogs and partisan sites, that’s fine, but if you overdo it without reading articles from reputable, credible publications, it’s like eating ice cream, donuts and chips for breakfast, lunch and dinner.

Your understanding of the world will be as unhealthy and warped as your body would be if you exclusively ate junk food and nothing else. Considering that the information in question right now is about a life-threatening disease in a global pandemic, that kind of unhealthy news diet could literally be deadly to you and people you care about.

Here are the protein and vegetables of news: city and national newspapers, public radio and established online publications. It’s understandable that some people may not want to read their news or might not be able to, due to a disability, poor literacy or another reason. But all these publications also have excellent podcasts that provide similarly accurate information. Some have videos as well, though they may not be on YouTube.

No doubt the amount of inaccurate, misleading and conspiracy-promoting videos on YouTube and other social media sites have increased since these studies were published. The only way to deprive them of oxygen is to deprive them of views.