Breaking
John Kerry As Presidential Climate Envoy: Virtue Signaling...
Increased Risk Of Chronic Conditions Associated With Early...
Top ETFs This Week As Dow Ends Day...
As Biden Admin Eyes Canceling Student Loans, Taxpayers...
How Social Media Is Helping Cryptocurrency Flourish
Here’s What You Need To Know About AstraZeneca’s...
Mini Gifts: What To Get For Your Colleagues...
Report: Biden Picks Janet Yellen For Treasury Secretary
Policy Priorities
How To Poise Your Business For Success (And...
Eight Key Steps To Landing Your Product In...
Brands That Are Redefining Black Friday
How Much Room Is There For E-Kick Scooter...
Why We Must Update The Law For The...
The Tax Rules For Home Businesses And Working...
How To Use The ‘E.R.I.C.’ Framework To Tackle...
Home Business 10 Years After Landon Donovan’s Legendary World Cup Goal, U.S. Soccer Eyes A Golden Generation
Business 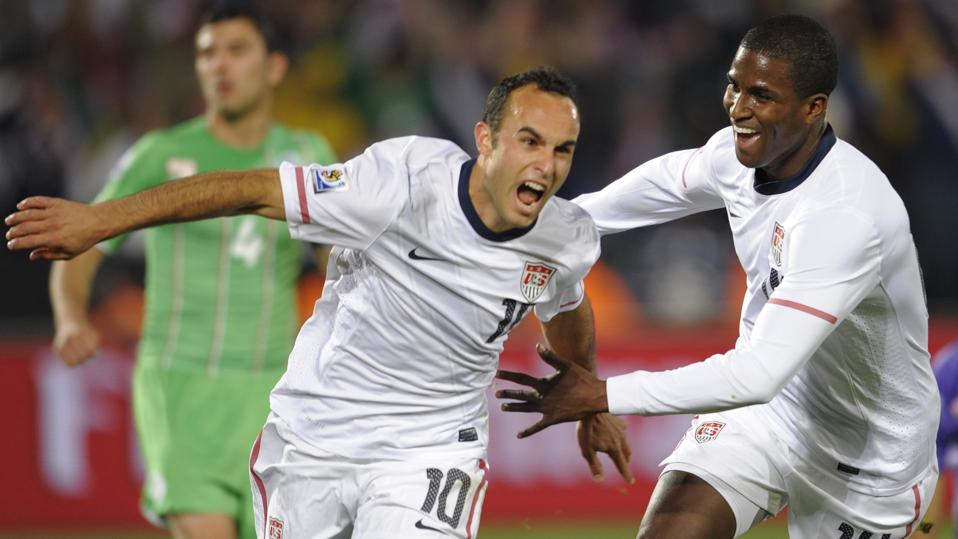 The US national team’s Landon Donovan celebrates after scoring against Algeria in the first minute … [+] of second-half stoppage time during their match in is Group C of the FIFA World Cup on June 23, 2010.

Tuesday marks exactly a decade passed since American soccer’s greatest male player scored his greatest goal in the Red, White and Blue, a stunning stoppage-time winner over Algeria that transformed the United States’ 2010 World Cup fate and landed the men’s squad at last in the American sports mainstream.

Looking back, it’s tempting to lament the lack of international progress in the 10 years since Landon Donovan’s crowning moment. Jurgen Klinsmann inexplicably left Donovan off his 2014 U.S. World Cup squad, and while the Americans still escaped their group, Tim Howard’s tournament record 16 saves prevented a 2-1 extra-time defeat to Belgium in the round of 16 from being a night of embarrassment. The deterioration under Klinsmann afterward and Bruce Arena’s imperfect salvage effort left the U.S. unthinkably outside the World Cup all together in 2018. And the rebuilding process under manager Gregg Berhalter has been haphazard, with the real test of qualifying for 2022 in Qatar approaching sooner or later.

By any measure, there has been enough talent and investment in the program for fans to be rightly frustrated by the subpar results since that blustery Pretoria evening. Even so, though, the foundation Donovan’s goal laid is undeniable. You can see it in the young Americans just now coming into their own.

It was once a huge deal when a “Yank” found his way into UEFA Champions League competition. This season, Chelsea’s Christian Pulisic, RB Leipzig’s Tyler Adams, Ajax’s Sergino Dest and Borussia Dortmund’s Giovanni Reyna have all played in it. None of them are yet old enough to legally drink in The States. Absurdly, Pulisic has already set the American record for career Champions League appearances thanks to his teenage years at Dortmund.

With that group likely to make up part of the core of the next decade’s national team, there’s plenty of supporting cast members also on the come. Although unlikely, 20-year-old defender Chris Richards could be a fifth American to see Champions League action later this summer after making his first-team debut this past weekend. Schalke’s Weston McKennie and Werder Bremen’s Josh Sargent are regular Bundesliga contributors. MLS defender prospects Reggie Cannon and Miles Robinson are expected to test major European waters sooner or later.

Everyone mentioned so far would’ve been eligible for the 2020 Tokyo Olympics — a U-23 tournament in men’s soccer — had the coronavirus not delayed the Games, as would a host of other promising prospects.

If you don’t think Donovan’s cool finish inside the left post is at least partly responsible for this sudden talent glut, you’ve never known a sports-crazed, 10-year-old boy. That’s how old Pulisic was that June late morning, East Coast time, growing up in the Central Pennsylvania. Give or take a couple years, that’s how old they all were, young enough to still dream big, but old enough to begin looking for examples to prove those dreams could come true. Donovan was certifiable evidence in a way no American player had ever been before.

While the Americans’ failure to qualify for Russia 2018 highlighted U.S. Soccer’s player development problems, those issues were already known in the industry. The failures of the 2018 cycle were partly a legacy of the early 2000s in MLS, when fostering young talent was an afterthought amid the league’s fight to survive.

That began to change with the creation of the Homegrown Player rule in 2008, sandwiched by the addition of clubs in Toronto and Seattle that operated as “major” sports franchises in their markets and raised standards for investment across the league. But Donovan proved a player who primarily cut his chops in MLS could not only reach the biggest stage, but come through in the biggest moments. Today, while many of the best young Americans still look to Europe, Adams, McKinney, Reyna and Richards all got there via MLS clubs.

Nothing is guaranteed for this new guard, of course. Ask that Belgian side that beat the Americans in 2014, in what was supposed to be the beginning of their own generational moment. The current FIFA No. 1 is still looking for its first major trophy since the 1920 Olympics, having lost to Lionel Messi’s Argentina in the 2014 quarterfinals, Wales in a shock Euro 2016 quarterfinal defeat, and eventual champions France in the 2018 World Cup semifinals.

Or ask Concacaf nemesis Costa Rica, which has seen two golden generations left wondering “what if?” In 2002, the Ticos had the misfortune of being drawn in the same World Cup group as winners Brazil and third-place Turkey, and were edged out in group play by the latter on goal difference. In 2014, penalties against the Netherlands halted their Cinderella run in the quarterfinals.

8 Pitching Mistakes That Are Costing You The Best Brand Collaborations

U.S. Bancorp Has Rallied 36%, What To Expect Next?