$100B In Mormon Till Does Not Merit IRS Attention

Well, it’s interesting to see Mormons back in the tax news. The Washington Post has a story about a whistleblower’s disclosures to the IRS that Ensign Peak Advisors, Inc, founded in 1997, has accumulated over $100 billion in assets without ever making any charitable distributions. The only two outflows appear to have been to bail out failing investments. 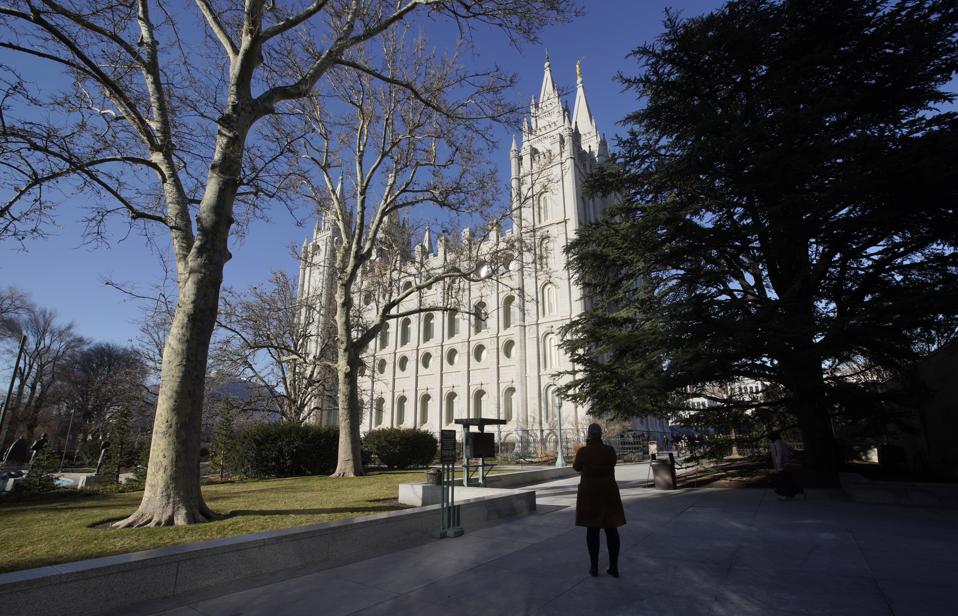 SALT LAKE CITY, UT – DECEMBER 17: A woman takes a picture of The Church of Jesus Christ of … [+] Latter-Day Saints, historic Mormon Salt Lake Temple on December 17, 2019 in Salt Lake City, Utah. A inside whistle blower has alleged the Mormon Church misled members on how a $100 billion investment fund was used. (Photo by George Frey/Getty Images)

Ensign Peak Advisors is exempt as an integrated auxiliary of The Church of Jesus Christ of Latter-day Saints (LDS), commonly referred to as the Mormons. The WP article cites Lars P. Nielsen, brother of the whistleblower, David Nielsen . There is a downloadable document available which purports to be by Lars. The content is consistent with the WP story. So have a look, if you like.

Nothing To See Here Folks

I don’t think David Nielsen will be able to retire on the reward from this case. That’s because there is not much of a case. The argument is that a private foundation is supposed to distribute 5% of its assets. Ensign is not a private foundation. It is an integrated auxiliary of a church. And there is nothing in the tax law that prevents churches from accumulating wealth.

Paul Streckfus of the EO Tax Journal agrees that this matter does not merit IRS attention.

The IRS does not attempt to question the beliefs or purposes of churches unless extreme (law violations, for example). In the case of the Mormon Church, if they honestly believe they should be saving for the “second coming of Christ,” why should the IRS question that? Just because there is $100 billion involved? If so, how much is too much? While church leaders have not been forthcoming about this pot of gold, church members can always withdraw their support if they object to this extreme saving or seek to remove the leadership.

On the expenditures that the whistleblower objected to, Mr. Streckfus wrote me

As far as bailing out the insurance company and the shopping mall, who is to say this was not a justified use of funds to try to save failing investments? In order for section 4958 on excess benefit transactions to come into play, I think the IRS would have to show some individuals benefitting personally from the bail out. Poor business judgment would not be sufficient.

On The Other Hand

So in my view, reporting this to the IRS is pointless, but that does not mean that there is nothing worth discussing. You can see discussion on ex-Mormon sites like this one about the sinister nature of the accumulation. One person I wrote to indicated it reminded him of the Boys Town story, where the storied charity’s raising of excess funds was exposed by none other than Warren Buffett.

The amateur historian in me kind of stands back in awe at what LDS has achieved. And it makes me wonder to what extent churches reflect the time in which they are born. Thomas Hobbes observed that the papacy was something of a ghost of the Roman Empire. And here we have LDS reflecting Tocqueville’s observation that the United States of the 1830s was something of a workshop with a sign saying “No admittance except for business”. (Joseph Smith, a native of Vermont who moved to western New York, published the Book of Mormon in 1830)

An interesting question is why we don’t demand the same level of transparency of churches, that we require of other not-for-profits. And you could also ask why church members don’t demand it of their churches. If there were that sort of transparency we would not have people being shocked, shocked that LDS has accumulated such a big stash. I have written about that issue here and here.

The other big issue is why not for profits are able to accumulate so much. Presumably the deduction for charitable contributions and the exemption from tax on investment earnings are reflective of not for profits doing something that serves some social purpose. If they are just going to accumulate, better they should pay some taxes. So called charities are becoming pools of tax-free capital.

Professor Edward Zelinsky, author of Taxing The Church wrote me that taxing church endowments would not risk the entanglement issues that other forms of taxation might create. He agrees with me that there do not seem to be any current laws being violated.

If LDS has accumulated $100 billion and not been transparent about it, it is really up to the members to deal with their leadership. If it is bad policy to allow exempt organizations to accumulate so much, Congress should change the law. There is really nothing here for the IRS to do making the whistleblower complaint pure drama.

There is a really long youtube video, if you want to invest over an hour of lifespan in this.

With Playoffs Drawing Near, The Steelers Are Hoping Duck Can Bounce Back

Apple Patent Reveals How Touch ID Returns To The iPhone

Retirees May Want To Revisit Their Savings Withdrawal...