As a feat of filmmaking, 1917 is a monumental achievement. The way it creates the illusion of a ‘single take’ gives us a new way of understanding the horrors of war and a level of shared-experience intensity that precious few other war movies can compete with.

It’s less successful, though, on a narrative level. The ‘one take’ approach imposes a few limitations and contrivances on the story that sometimes not even the greatest filmmaking smoke and mirrors can completely hide, while the whole underlying premise of the story just doesn’t quite convince. 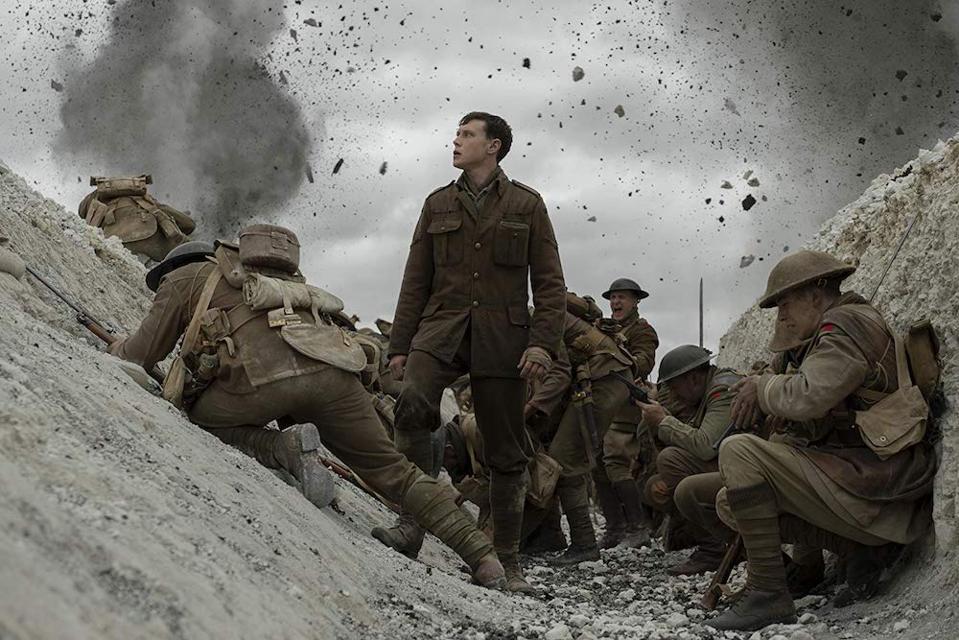 The amount of detail visible in shots like this on the 1917 4K Blu-ray is stunning.

In the end, though, 1917 is all about the experience. About throwing you face first into the devastating horror of a now scarcely imaginable type of warfare in a uniquely immediate and inescapable way. And in that respect – especially with the support of the sensational picture quality and soundtrack of the 4K Blu-ray – it succeeds fantastically well.

Shot predominantly at 4.5K and the proud recipient of a 4K digital intermediate, 1917’s 4K Blu-ray picture is the real 4K deal. And it looks it.

Detail levels are immense. The texture and minutiae in everything from the meticulously recreated trenches and no man’s land sets to the mud- and blood-spattered uniforms of the soldiers and the poignantly rich, grassy pastures of the ironically beatific countryside looks incredibly lifelike and immediate.

The detail and depth in this shot is something to behold in 4K.

What’s more, this lifelike sharpness applies equally to foreground and background image elements, combining with the long, seemingly cut-free shots to create a mesmerising feeling of ‘being there’.

In this respect, in fact, 1917 arguably delivers the single most compelling proof yet of just how important 4K is. After all, here it doesn’t just make the picture quality objectively better. It also adds to the impact and immediacy of a film that’s all about trying to recreate for the audience the actual experience of being at war in 1917.

The consistency of the detailing is another huge factor in 1917 qualifying as a, if no THE, reference grade 4K Blu-ray disc. It never slides into softness, even during the film’s occasionally ultra-dark sequences, such as the one where Schofield meets the lady looking after the baby beneath the ruined occupied town.

There’s no sign of the compression artefacts and noise that were so noticeable in the dark moorland and chapel scenes towards the end of Sam Mendes’ Skyfall 4K Blu-ray (reviewed here), either.

Black levels go extremely deep, but never to an unnatural, forced degree. There’s always enough detail visible to make the blackness feel authentic rather than like any sort of hollow ‘cheat’ in the filming or mastering process.

The lack of general fizzing noise during these ultra-dark moments is also remarkable – and testament again to the high resolution of the master.

The 1917 4K Blu-ray’s HDR really springs to life with the ruined town at night sequence.

It likely does no harm to the extreme detail and clarity of the picture that the transfer runs at a very high bit-rate. During scenes that contain a lot of background detail and movement data rates routinely exceed 80Mpbs, punching right up to 100Mbps at times.

The only time the datarate drops as low as 40-50Mbps (still quite high by the standards of some 4K Blu-rays) is with shots that contain a lot of monotone sky. Where, in other words, the repetitive nature of the sky makes heavier compression temporarily possible without causing obvious artefacting.

Although the transfer’s HDR and expanded colour work isn’t as aggressively, immediately stellar as its 4K clarity, it still plays its part in creating the film’s all-important realism. The subtleties in the various brown and tan shades of the soldiers’ uniforms looks almost miraculously refined on the 4K Blu-ray, while the green pastures, muddy battlegrounds and leaden skies all look more lifelike thanks to the expanded light range and colour.

There’s also more refinement and finesse in the film’s skin tones. This matters in 1917 more than usual, as the film’s remarkable attention to realism extends almost miraculously at times to changes in the actors’ pallor. Check out, in particular, the differing and changing complexions of the two main actors during the traumatic few minutes following the crash of the German plane.

Having to clamber over a mountain of rotting bodies is even more unpleasant in 4K.

The HDR work is focused on enhancing the gritty realism rather than ‘showing off’. While this ‘cloud day realism’ sees the frame average light level of the HDR10 transfer topping out at a fairly limited 168 nits, though, the transfer’s peak light level of 1000 nits makes its presence felt strongly at times – most notably in the night scenes in the ruined town, and in the flames of the burning barn following the plane crash.

As if the technical prowess of 1917’s 4K Blu-ray picture wasn’t already exciting enough, Universal has also provided the film in both HDR10+ and Dolby Vision masters alongside the baseline HDR10 one. This means you’ll be able to enjoy the film in dynamic HDR (which provides extra scene by scene data to help your TV deliver the best possible picture quality) regardless of whether your TV supports HDR10+ or Dolby Vision.

The extra data available with HDR10+ and Dolby Vision leads to a noticeably punchier, more refined image, especially during the ruined town at night sequence. This is even evident on my high-end reference TVs, but should actually deliver even more emphatic results on cheaper HDR10+ or Dolby Vision supporting models.

So long as most of the biggest TV brands look set to continue supporting either HDR10+ or Dolby Vision, rather than both, we can only hope that more studios follow Universal’s lead in including dual masters on their 4K Blu-ray releases.

Family is all the motivation you need.

If I was really determined to find a flaw in 1917’s 4K Blu-ray picture, I’d say that one or two of the film’s CGI ‘painted’ backdrop extensions – especially around the sequence featuring the broken bridge – look a touch soft compared with the blistering sharpness and detail of everything else. But this says more about me needing to get out more than anything genuinely negative about what is, overall, a true standard bearer for the 4K Blu-ray format.

The 4K and HD Blu-rays of 1917 both get a Dolby Atmos sound mix that’s as reference grade as the 4K disc’s picture quality.

The way the mix uses the score, for starters, is nothing short of masterful. It ebbs and flows, rises and falls, shifts tone and tack, and soars and sears in consistently perfect alignment with the onscreen action, always bolstering the all-important illusion that so much of the action you’re witnessing is taking place in real time.

The score also imbues the action with an array of emotions and moods that the urgency and filming limitations associated with the ‘one shot’ approach might sometimes have made impossible to create visually.

The precision with which the Dolby Atmos mix places the explosions in this famous shot makes it … [+] perfect demo material.

The way the score is actually mixed for Atmos is what really seals the deal, though. It’s fed beautifully into all the Atmos channels, building in layers of height, changing width and carefully integrated rear-channel elements to effortlessly create moments of poignancy, confusion, uncertainty and drama. Not to mention a number of climactic crescendos that threaten to rupture your ear drums and shatter your walls as potently as an exploding shell.

The expressive and emphatic score is brilliantly mingled with a stunning showcase of Dolby Atmos effects that bring the chaotic atmosphere and epic action into your living room with uncanny and disturbing accuracy.

During Schofield’s final dash along the top of the trench, for instance, you don’t just generally hear explosions going off all around him; the sound of each explosion appears to emanate from precisely the correct position. If an explosion takes place off screen to the right, that’s where you hear it. If it lands over Schofield’s left shoulder, that’s where you hear it. If a shell lands in the far distance it sounds further way. If it lands near the camera, it sounds nearer the camera. All while the score builds steadily up to ’11’, shouts and shots abound all around, and projectiles and debris scatter to all corners.

Overall this sequence may actually top the opening plane sequence from Overlord as my favorite Dolby Atmos object placement demo sequence to date.

Another classic moment where effects placement is concerned is the dogfight/barn crash sequence, while the shot where a pair of British planes fly overhead from back to front tops all previous ‘planes flying overhead’ Atmos demo moments. You can even hear the slightly staggered position of the two planes as they roar across your ceiling.

To seal the stunning audio deal, 1917’s Dolby Atmos dynamic range is colossal. Thumpingly deep bass shares the soundstage with sometimes painfully (in a good way) intense and shrill trebles, as well as absolutely everything in between. Truly flawless stuff.

In some ways, at least, 1917’s 4K Blu-ray continues to spoil us with its extras.

For starters, they’re all found on the 4K Blu-ray as well as the HD one, so you don’t have to swap discs to enjoy them.

They also boast two excellent commentary tracks: one by Sam Mendes, and one by cinematographer, Roger Deakins. Both are must listens if you want to understand all the film-making tricks that went into delivering the ‘one shot’ look. Deakins’ recall of all the lighting, camera, rigging and editing that went into each shot is particularly incredible. But Mendes adds lots of other detail about the directing and writing process, so that there’s surprisingly little overlap between the two separately recorded commentary tracks.

Besides the commentaries, Universal has provided four ‘making of’ featurettes. The Weight Of The World focuses on Sam Mendes’ impact on the film, from the original idea through to writing and direction. It’s well constructed and interesting, but disappointingly short at under five minutes.

Allied Forces: Making 1917 is a slightly more substantial (12 minute) look through the massive collaborative effort required to recreate the war-torn landscape and deliver the film’s ‘one shot’ feel. Again, this documentary is fascinating and packed with great behinds the scenes footage, but could have done with being longer. Like, two hours longer. 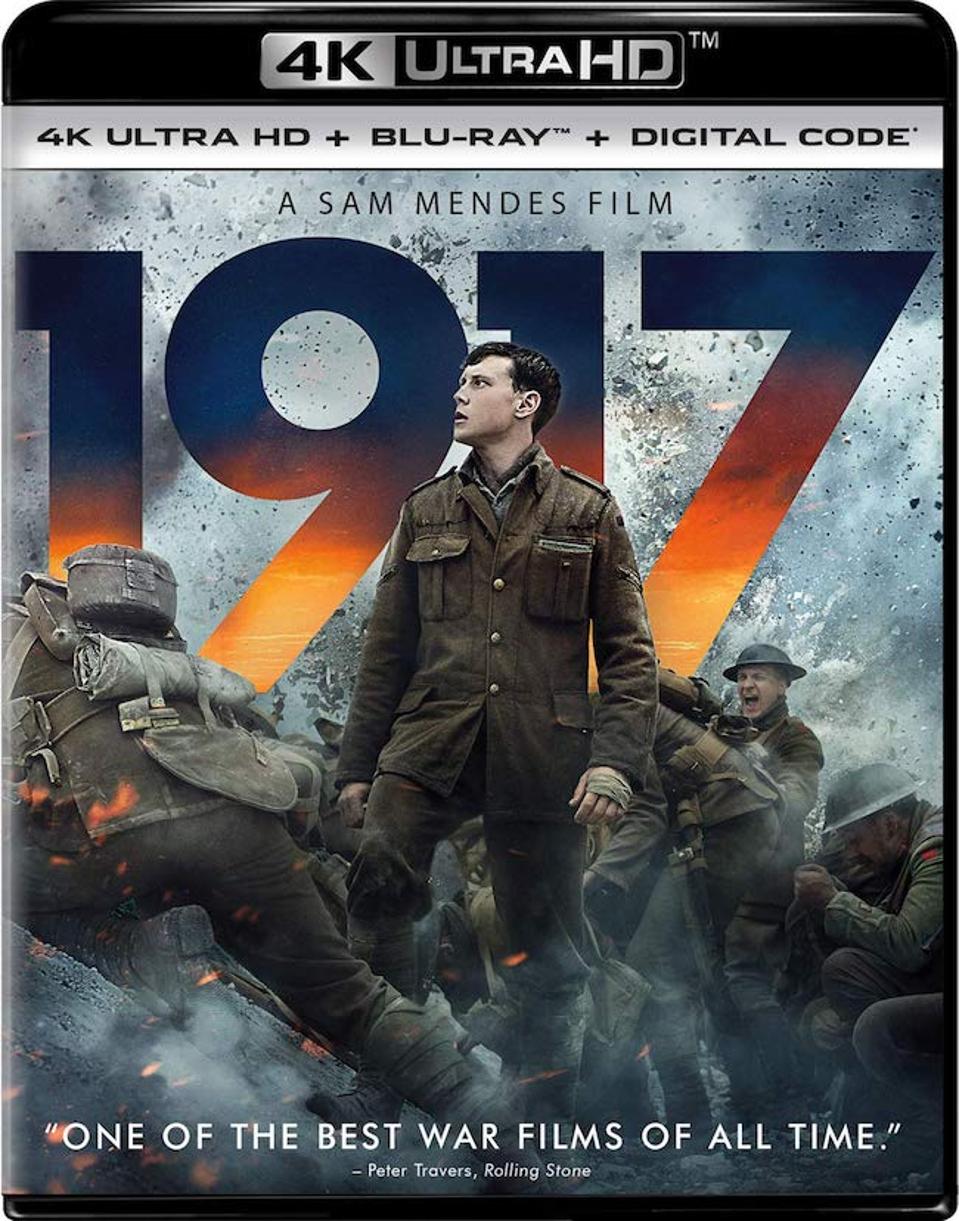 The Score Of 1917 briefly (four minutes) covers the work of Thomas Newman in developing and recording the film’s perfectly timed music. In The Trenches focuses on the actors, and again has easily enough going on to keep you interested for its seven minute running time.

Last but not least is Recreating History, which spends an enjoyable 10 minutes looking at the efforts of Production Designer Dennis Gassner in creating the film’s insanely great and convincing locations.

While 1917’s story doesn’t quite hold up, as an immersive and intense recreation of the horrors of the first world war it’s an experience not to be missed. Especially in all its 4K HDR and Dolby Atmos glory.