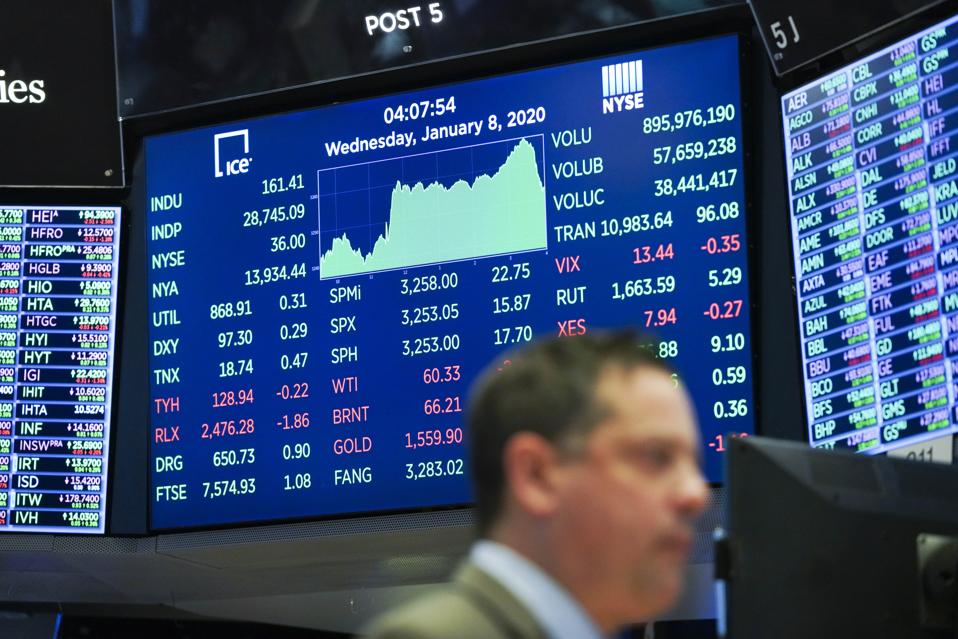 In a year filled with uncertainty, investors may want to rethink their strategies in anticipation of … [+] a market correction. (Xinhua/Wang Ying via Getty Images)

What kind year we can expect in 2020 is anyone’s guess. The current climate is as bizarre and unusual as anything I’ve seen in 25 years of investing. The equity markets have been on a tear for much longer than anyone could have predicted. Investors in the big passive index funds and ETFs continue to reap rewards by staying long in an aging bull market that’s now almost 11 years old. On top of that, fixed income markets also appreciated last year even though they started in bubble territory and most market prognosticators expected a fixed income correction in 2019.

Rational minds know that the good times can’t last forever which is just one reason why investors who only invest on the long side may want to consider rethinking their strategy. From my vantage point as a value-oriented asset manager, right now it makes sense to short sell, and/or to harvest some of your gains, so that you’ve cash ready for when the market finally corrects. On the long side, I recommend treading very carefully and only investing long in excellent companies that trade at attractive valuations due to temporary reasons which will likely change in the near future.

The current situation is reminiscent to the environment in 2000-01, when all tech companies, even those that were years away from profit, just kept appreciating daily. Eventually, many thought that tech was king and discredited fundamental investing as the “old way” which was now dead, until the bubble finally burst. Along the way, the US Fed was totally complicit – it pumped way too much cash into the system (first to accommodate unreasonable Y2K fears and then to alleviate the tech collapse); of course, this set us up for the spectacular housing bubble which ended with the Great Financial Crisis of 2008. Well, it’s nearly a dozen years later and, once again, everyone wants to be invested in tech companies as their stock prices climb to nosebleed levels. As before, the US Fed is complicit once again with its giant quantitative easing programs that culminated in today’s “QE5” – a $60 BN/month repo operation.

In contrast to what we saw in 2000-01, Facebook, Google, Amazon, Netflix, Tesla and many of their contemporaries are great businesses today. They’ve changed how firms compete and provide products and services to consumers. But, they’re not immune from normal business risks, such as antitrust actions, regulatory threats to how they collect and use customer data, and increased taxation. For many of these companies, those risks are real and will likely increase in the today’s political climate.

And while I see a real possibility of a pinprick to the tech and equity bubbles in the coming months, what really concerns me is the vast amount of outstanding debt, both public and private. At one point last year there, was some $17 trillion in negative-yielding government bonds outstanding. Although that figure is lower now, there‘s still a tremendous amount of ultra-low-yielding government debt outstanding. On top of that, we’re at peak market levels for all sorts of other credit instruments within the fixed income market—student loan debt, junk-rated bonds, collateralized debt obligations (CDOs), auto loans, and collateralized loan obligations (CLOs) to name just a few.

In the last few weeks, two venerable names from supermarket shelves—Borden and Bumble Bee—filed for Chapter 11 protection. These were names everyone knows, not tech startups looking to disrupt their industries. The main problems they faced were not because dairy products and canned seafood had fallen out of favor. Instead, as as with many other high-profile bankruptcies these days, they had simply borrowed way too much money because of a voracious investor appetite for new debt issuance.

While the Fed is highly focused on inflation and attempting to keep the CPI and PCE in check, it doesn’t appear too concerned about the amount of leverage outstanding. With interest rates so low for so long, almost any business can borrow as much debt as its owners desire. Despite that and an economy that keeps growing, we’re starting to see high-profile bankruptcies such as the food companies noted above. Similarly, McDermott International (ticker: MDR), a global infrastructure and engineering firm, announced its $9.2 BN bankruptcy this week. Like Borden and Bumble Bee, the primary source of distress for MDR wasn’t business fundamentals. Rather, it also borrowed way too much– in its case, to finance a major acquisition of Chicago Bridge & Iron just 24 months ago.

In addition to increasing domestic distress related to excessive borrowing, we’re also seeing heightened distress abroad. There’s even been talk about increasing defaults in China, a market that’s well known for lack of transparency and government influence on the economy.

And high debt levels and an overvalued equity market are not the only concerns these days. We’ve gotten to the point where not only has there been a dramatic increase in systemic risk, but geopolitical risk has ratcheted up as well. Investors are rightly nervous about the impeachment proceedings, the 2020 election, heightened tension with North Korea and Iran, and the escalation of hostilities in the Middle East, any of which could be the pinprick that pops one of these bubbles.

With that, this might be a good time for investors to consider building up their short portfolios and increasing portfolio downside protection. Unfortunately for the self-directed investor, implementing that kind of strategy takes considerably more expertise than simply tracking a major index or buying into a big-name company whose market cap keeps growing. It’s during times of change that working with an experienced investment manager who has witnessed multiple business cycles can really add value for a portfolio. A good alternative investment manager, who can invest long and short and has a proven eye for finding extreme value, may help investors endure extreme market turmoil. It may be out of favor right now, but an investment strategy focused on value and business fundamentals may be the best prescription for uncertain times ahead.

No End In Sight: Protesters Back In Hong...