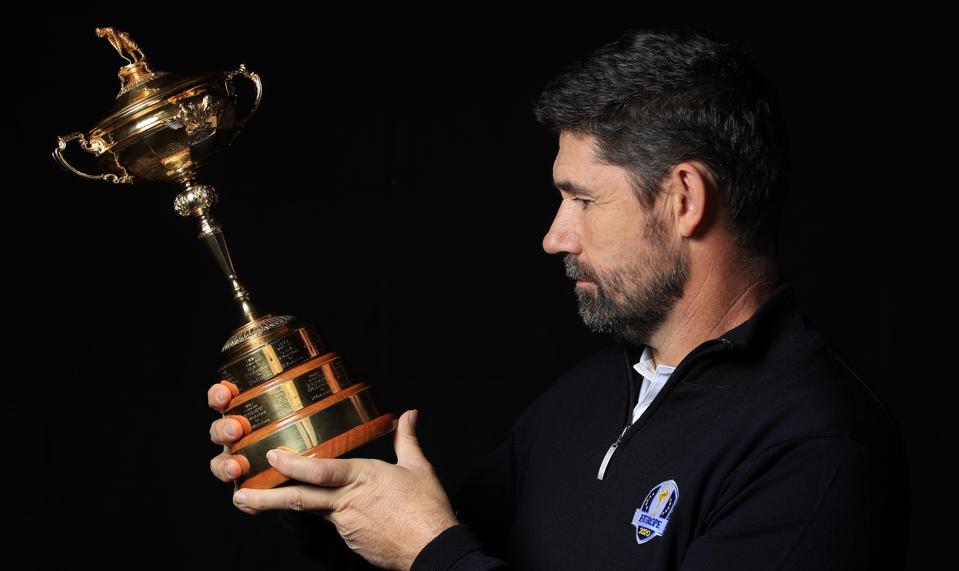 Padraig Harrington with the Ryder Cup trophy after he was announced as the European Ryder Cup … [+] Captain for 2020. (Photo by Andrew Redington/Getty Images)

After dismissing the idea that this year’s Ryder Cup might be delayed 12 months, European captain Padraig Harrington has accepted that the idea of the September match being played behind closed doors, if at all possible, might be a boon for fans.

On Tuesday James Corrigan reported in the Daily Telegraph that the relevant golf authorities were in discussions to delay the 2020 match at Whistling Straits in Wisconsin, fearing that the chaos caused by the Coronavirus (already the Masters and the PGA Championship have been postponed) would cause any resumption of tour action to possibly overwhelm the biennial spectacle.

The Telegraph noted that the event is often referred to as the sport’s third biggest event and, whilst many would doubt the specifics of that, there is absolutely no question that there is financial dependency on the line every two years.

A 12-month delay is not without precedent for the match, either, because the 2001 edition was postponed following the 9/11 attack.

Corrigan further reported that the Ryder Cup slipping to an odd year would offer further potential benefits in avoiding any Olympic clash, whilst the long run-in required to successfully stage the event meant that an early decision was paramount.

However, in two Irish radio appearances Wednesday the European captain Harrington poured scorn on the idea.

“September is a long way off so there’s no change to the situation at all at this stage,” he said on Today FM’s Ian Dempsey Breakfast Show.

“I know there’s been some rumours and they had to put out a statement to say there’s been no change, but there’s definitely no change.”

Later in the day the three-time major championship winner and six-time Ryder Cup representative told Newstalk’s Off The Ball programme: “They’re not hoping, but preparing, to proceed. They assume it will go ahead.

“It was interesting to be on the inside and know it’s not true – the cancellation, the anonymous source.”

He later took a different tack, when asked to ponder a speculative point where the world had turned by September and a tournament played behind closed doors was considered a safe possibility.

“I’d be more considered,” he said. “Wouldn’t we love some sport to be going on now, if it was possible?

“Most people are stuck at home, wouldn’t we love something to be able to watch on the TV, a bit of sport?

“So, I would go down the road if it was possible to play it from a health and safety point of view, wouldn’t it be great to put something on television for people to watch, something to bring a bit of something else into the day?

“By the time we get to that sort of stage I’m sure there will be some sporting events where enough of the athletes have recovered and can compete behind closed doors.

“I’m not talking golf here, other sports, just to give us something to watch on TV.

“We all miss the Premiership, we miss the rugby, golf or any other sport. It would be not essential, but it would sure beat watching another boxset on Netflix or something wouldn’t it?

“I think it would be odd and strange, and I think some of the soccer matches played behind closed doors, there was a bit of that about it, but it would be more about providing a service than necessarily the sport.

“You can see it happening in that situation where as I said players could be checked. By September, if there was more ability to test people and more will have recovered.

“There are things by the time September comes round that we just cannot envisage right now and that’s why they haven’t cancelled it or are preparing to have it.

“There really are so many scenarios that can come into play before that crunch time.”

WWE’s Newest Signing Could Be A Future Mega...