Breaking
Zynga Stock Looks Attractive At $9
How Russian Thieves Use Dark Web To Get...
France Off Travel Corridors And FCO Exempt List
Ask Ethan: Why Are The Moon And Sun...
When To See The Moon And The Planets...
IRS-CI Involved In Largest-Ever Seizure Of Terrorist Organizations’...
The Check Really Is In The Mail. After...
Epic Games Vs Apple: Why You Won’t Be...
Senator Kamala Harris Proposed A Bold Tax Credit...
Deal Terms To Reduce The Risk When Buying...
Multiple Sclerosis Drug Shows Promise For HIV Prevention...
The Neglected Piece Of Retirement Planning
It’s No Longer A Viable Option For Capitalism...
Virtual Credit Cards: An Extra Layer Of Protection...
Lessons From The Rainforest: Human Health Leads To...
Four Easy Ways To Bolster Your Company’s Reputation
Home Technology 2020 will bring a New Renaissance: Humanity over Technology
Technology

2020 will bring a New Renaissance: Humanity over Technology

Every year I travel the world as part of my job to discover, discuss and share the future with people from all walks of life. And what I found is this: the future is likely to be better than we think – but we need to design and govern it wisely!

Just two decades in, the twenty-first century has already presented us with a massive economic crash, geopolitical quagmires and worrisome swings towards popularism. This may not be the optimal context for heralding a New Renaissance – but then again, the original renaissance wasn’t born in idyllic circumstances either. Rather, it was a literal rebirth of human culture.

I believe the exact same process is happening again today, but not for the same reasons. Let me explain.

Technology is the new religion

Technology has replaced the once-mighty church and currently dominates our personal as well as professional lives. A few global behemoths – the churches of dataism – now control how we communicate and connect, search, buy and sell, entertain and learn. What was once used to connect us (so-called social media) is now dividing and manipulating us, catapulting us towards an algorithmic society.

But we are also witnessing the rebirth of humanity just as it once reawakened in Italy, and we may already have reached ‘Peak Tech Worship’ in 2019. Silicon Valley CEOs are dragged in for questioning before the U.S. Congress and the EU Commission, and #digitalethics is now a global theme (a meme I presented back in 2017 in my book Technology vs. Humanity). The debates about ‘digital pollution’, data sovereignty, abusive data-mining, social media’s manipulation of the democratic process, and algorithmic bias are growing louder every day.

‘Business as usual’ will kill us

In addition to the wicked problem of technological domination and ‘too much of a good thing’, climate change is now – finally – recognised as a real emergency that only the crudest naysayers continue to deny, further forcing us to face ‘the end of business as usual’. The bottom line is that both the way we (ab)use our environment cannot continue, and the way we have put technology (and its financial rewards) above humanity cannot continue. These are the two externalities of exponential progress that we must now confront – because they are existential. 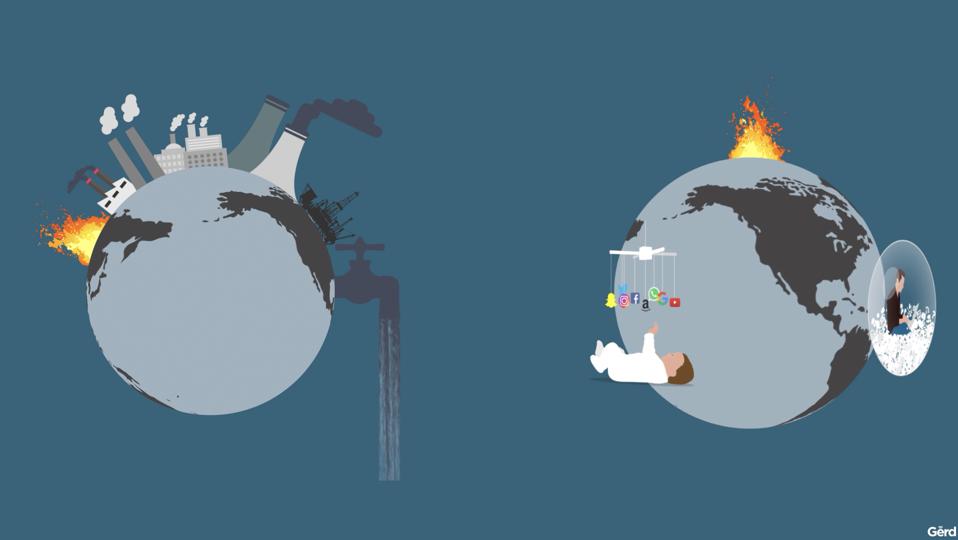 The New Renaissance coming in 2020 will see a rebirth of humanism and the humanities on top of exponential technological progress. In economic terms, human purpose will complement ‘people, planet and prosperity’ for a new, quadruple bottom line that I call ‘People Planet Purpose and Prosperity’, riffing off the UN’s SDGs. Maybe the recent Business Roundtable declaration on moving from shareholder primacy to stakeholder value can be viewed in this context? Personally, I think we are going to see a new stock market emerge in the next 5-7 years, dedicated to companies that adhere to these 4Ps – a kind of NASDAQ for sustainable capitalism.

… and it could be heaven or it could be hell. How will we reassert our humanity and maintain our human values in a world that is changing exponentially? Leonardo Da Vinci’s ‘Vitruvian Man’ depicted the ideal proportions of the human body – maybe now we need a ‘neoluvian (wo)man’ depicting the future relationship of humans and technology? 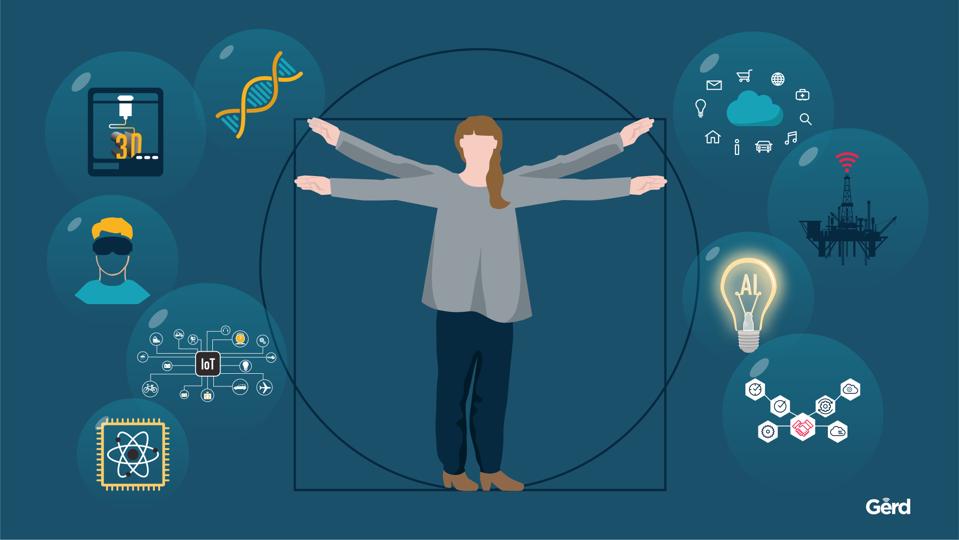 Transhumanists may keep pining to ‘transcend human limitations’, while Elon Musk tells us we must become cyborgs to keep up with AIs – but don’t be mistaken: The new Renaissance that is now upon us is a very human one. After all, it will be those that keep thinking, acting and learning like robots who will be unemployed and become ‘useless humans’.

Today, technology has been enshrined and even deified, and data is indeed the new oil. Yet most technology will soon become an abundant commodity, and humanness will be a sought-after scarcity. These are the human-only traits and characteristics I call the ‘androrithms’ – the opposite of algorithms, the not-data, not-binary, non-computable attributes that actually make us human: intuition, imagination, empathy, compassion and emotional intelligence. Androrithms are the connective tissue of our civilisation, and they will never be replicable in silicon.

Our future is to be more human, not less.

The future is often presented in two flavours: Silicon Valley sells us Utopia (super-humanity), and Hollywood + Netflix et al sells us Dystopia (fear). Yet the real future is neither ideal nor infernal. Apple’s CEO Tim Cook – a rare example of a humanist running a technology company – really nailed this in his 2017 MIT commencement speech: “Technology can do great things, but it does not want to do great things – it doesn’t want anything”. The want has to come from us – and the future is something we create every day, by action or by inaction.

In order for this new Renaissance to take hold, education urgently needs to leave behind its industrial-era obsession with efficiency and productivity, and focus on enabling and empowering human-only skills – because the bottom line is that ‘the robots’ are coming to handle the donkey work, the chores and the commodity tasks – and if you are clever you will let them!

*On the topic of the future of work, be sure to watch my latest film‘How the Future Works’.

Perhaps in the industrial age and even in the so-called information society we’ve been pretending to be inhuman all along, to be ‘better machines’ – and now it’s time to give up the act: Our ultimate job is to be human.

As the third decade of the twenty-first century kicks off, let’s transcend our love-affair with ‘digital transformation’ and ‘exponential technologies’ and rediscover what it means to be human.

Welcome to 2020, and welcome to the New Renaissance! 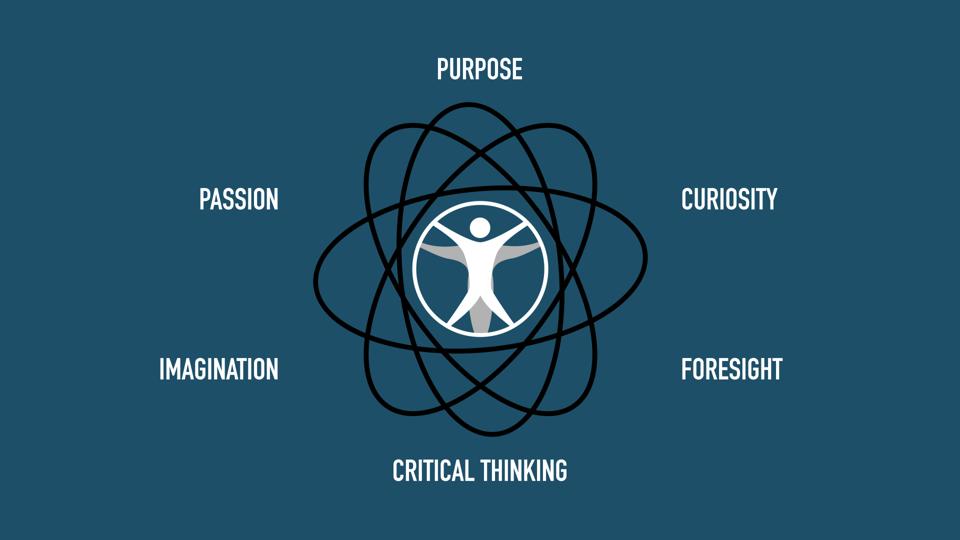 ‘Star Wars Episode IX: The Rise Of Skywalker’ Should Have Been Two Movies