In the hopes that OPEC and its allying countries will reach a production cut agreement when they meet virtually next Monday, oil prices surged higher on Friday, April 3.

Although the exact details of the potential cut are not clear, on Thursday, President Trump announced he urged both Russian President Vladimir Putin and Saudi Crown Prince Mohammed bin Salman to reduce oil production by 10 million to 15 million barrels, which represent roughly 10% of the global supply.

U.S. West Texas Intermediate Crude jumped 7% to trade at $27.08 per barrel on Friday. The commodity has gained more than 20% for the week and is on track to end a five-week losing streak that was initiated by a price war between Saudi Arabia and Russia in early March.

International benchmark Brent crude soared 11.6% to trade at $33.40 per barrel.

Since oil producers and other companies in the energy industry have been beaten down in recent weeks as a result of the price war, some of them may present good value opportunities as they are trading below their Peter Lynch value.

Lynch, the renowned investor who managed Fidelity’s Magellan Fund between 1977 and 1990, developed this strategy in order to simplify his stock-picking process. With the belief good, stable companies eventually trade at 15 times their annual earnings, he set the standard at a price-earnings ratio of 15. Stocks trading below this level are often considered good investments since their share prices are likely to appreciate over time, creating value for shareholders. The GuruFocus All-in-One Screener also looked for companies with a business predictability rank of at least two out of five stars and a 10-year revenue per share growth rate of at least 4%.

The Tulsa, Oklahoma-based midstream energy company, which operates pipelines and storage terminals, has a $7.78 billion market cap; its shares were trading around $33.93 on Friday with a price-earnings ratio of 7.67, a price-book ratio of 2.88 and a price-sales ratio of 2.87.

The Peter Lynch chart shows the stock is trading below its fair value, suggesting it is undervalued. The GuruFocus valuation rank of 6 out of 10 also supports this assessment. 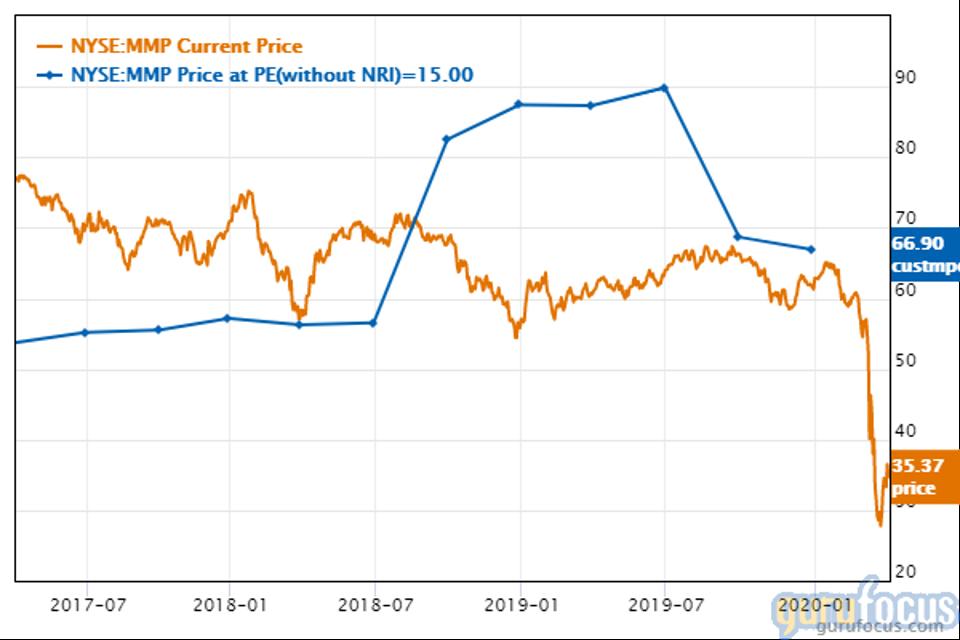 GuruFocus rated Magellan’s financial strength 4 out of 10. While the company has issued approximately $643.12 million in new long-term debt, it is at a manageable level due to sufficient interest coverage. The low Altman Z-Score of 1.62 also warns that the company could be at risk of going bankrupt since its assets are building up at a faster rate than its revenue is growing.

The company’s profitability fared much better, scoring a 9 out of 10 rating on the back of strong returns that outperform a majority of competitors. Its operating margin is in decline, however. Magellan also has a moderate Piotroski F-Score of 4, which indicates business conditions are stable. As a result of a decline in revenue per share over the past 12 months, the company’s 4.5-star business predictability rank is on watch. According to GuruFocus, companies with this rank typically return 10.6% per annum over a 10-year period.

The oil and gas producer, which is headquartered in Houston, has a market cap of $6.78 billion; its shares were trading around $17 on Friday with a price-earnings ratio of 10.49, a price-book ratio of 3.23 and a price-sales ratio of 3.45.

According to the Peter Lynch chart, the stock is undervalued. The GuruFocus valuation rank of 6 out of 10 also leans toward undervaluation. 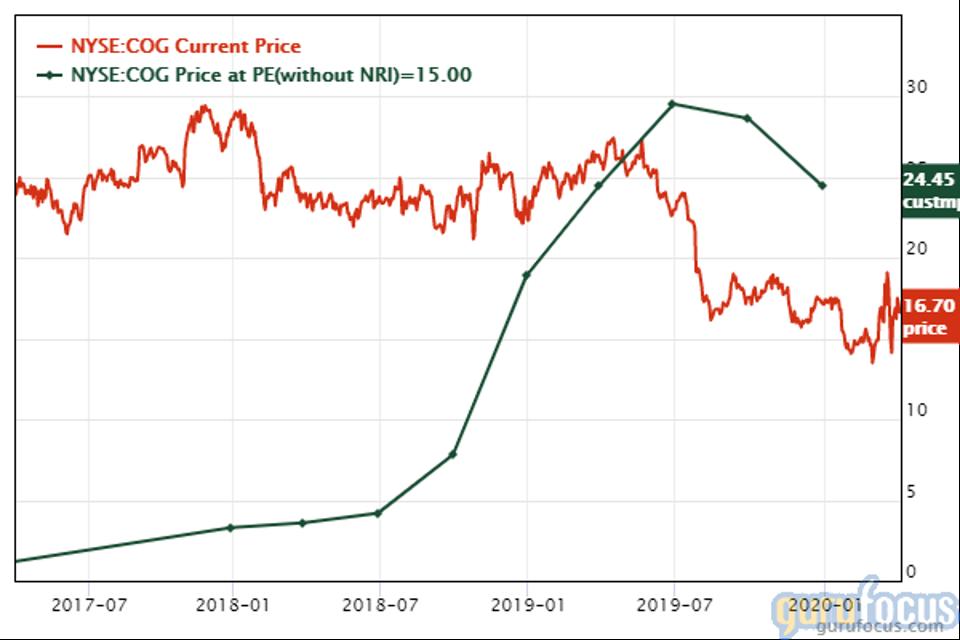 Cabot’s financial strength was rated 6 out of 10 by GuruFocus, driven by comfortable interest coverage and a high Altman Z-Score of 3.61.

The company’s profitability scored a 7 out of 10 rating on the back of strong margins and returns that outperform a majority of industry peers and a high Piotroski F-Score of 8, which implies operations are healthy. Although its revenue per share growth has slowed over the past year, Cabot has a two-star business predictability rank. GuruFocus says companies with this rank typically return 6% per year on average.

Based on the Peter Lynch chart, the stock appears to be undervalued. 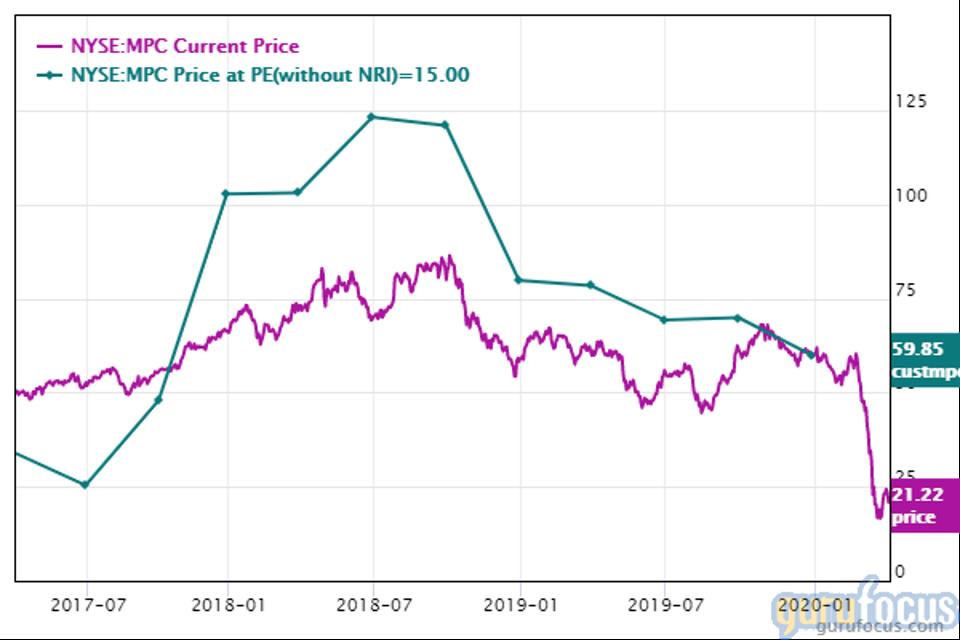 GuruFocus rated Marathon’s financial strength 5 out of 10. As a result of the company issuing approximately $8.9 billion in new long-term debt over the past three years, it has low interest coverage. In addition, the Altman Z-Score of 1.87 indicates it is under some financial pressure since its assets are building up at a faster pace than revenue is growing.

Boosted by an expanding operating margin, the company’s profitability fared better with a 7 out of 10 rating. Marathon also has strong returns that outperform a majority of industry peers and a moderate Piotroski F-Score of 6. Due to a slowdown in revenue per share growth over the past 12 months, the 2.5-star business predictability rank is on watch. Companies with this rank, according to GuruFocus data, return an average of 7.3% per year.

Pandemic Is Rewriting The Playbook For Off-Campus Student Housing

How To Rediscover The Art Of Listening During The Lockdown

Robinhood Is Back Online, But Millennials Should Still...