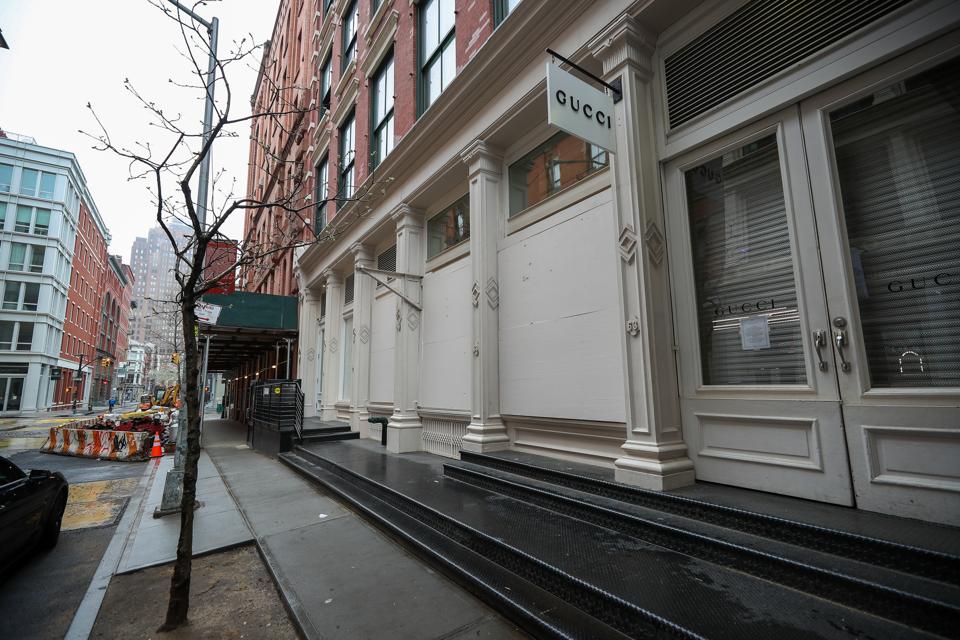 Intensive care units have become battlegrounds with heavy casualties. An old friend who’s worked in emergency rooms for decades and has seen a lot in those years described the local ICU as “horrific.” People are dying right and left as medical professionals don’t know what to do. The virus is too new. No one knows what medicines might work. New York can only keep pace with the mounting dead through temporary morgues set up outside hospitals.

To call this bad is to face the limits of vocabulary. The artist and writer Molly Crabapple yesterday reached for the type of poetry this will eventually require: “Since yesterday, the streets in downtown Manhattan have been silent except for the sound of ambulance sirens.”

Though words may fail, the magnitude of trouble will not. What was bad will turn worse, much worse, and drastically hurt the most vulnerable. As attention turns to the immediate and devastating impact of contagion, there is little time to look ahead—like the driver, preoccupied with swerving to avoid a child’s ball rolling into the street, who fails to notice just up ahead the truck racing through a red light. There are at least three careening vehicles bearing down.

Directly ahead are tornado and hurricane seasons, starting respectively in May and June. Times when entire areas can be laid waste. When large populations—well, those with resources to up and leave—may quickly need to evacuate areas. There will be varying degrees of destruction, when the availability of materials, personnel, and transportation are paramount.

What if the pandemic is still unfolding? Where will the sick, or the healthy, for that matter, go? What temporary housing, even tents, could be afforded those who have nothing left? How could this upturn the isolation measures that experts say will continue to be vital? Could manufacturers gear up with that in mind, the federal government using its fiscal power to stockpile now? Or might that same government make aid available to affected states whose governors had been obsequious enough to merit help? Because everything is a piece of the ego and reelection puzzle today.

A second danger is taxes—or, rather, a lack of cash to pay them. The federal government can borrow money as it wishes. (Although, given the growing pressures among the set with a plump and hungry look—the ones who pushed back, bloated, from their tables to return yet again to the buffet trough—you could expect another attempt to cut all social spending because they don’t get a cut).

States, however, aren’t keepers of the mint and must handle debt on a different level. Some are willing to run their scythes through the fields of the poor. Ohio Governor Mike DeWine has told his cabinet to ready “immediate cuts of up to 20% to their agencies’ budgets for the next 15 months” after more than 140,000 job losses reported Randy Ludlow of the Columbus Dispatch. Income and sales tax are hard hit.

DeWine said it is “too early” to tell if any areas, such as schools and public-assistance programs like Medicaid and food stamps, would be exempt from budget reductions. The state expects more recipients to enroll in the state and federally paid health-care program due to ongoing job losses, he said.

Those of low-income and in poverty don’t have the resources, whether time or money, to wear representatives down into capitulation. Of course they will be some of the logical targets, even as so many working minimum wage are expected to risk their lives so others can purchase necessities or have a meal or groceries delivered to them.

Ohio won’t be the only state in a revenue shortfall. Such plans will become a national fiscal pastime during an election year where, in many states, success comes from being penny wise. (There is apparently no evidence that Stephen King chose the name Pennywise for the evil clown in It because of the advice to never be penny wise and pound foolish.) But undercutting a large segment of the population—which will drive down a state’s competitiveness and push up disease, despair, and crime—seems as foolishly evil as one might expect.

Filling the beggar’s trilogy is debt. Bloomberg—the massive media enterprise, not the failed presidential candidate—has reported that a “global consumer default wave is just getting started in China.” Millions already find themselves without jobs and income while facing debt they had already incurred. Overdue credit card debt is up by half as delinquency rates float upward in China. Household debt-to-GDP ratios are up in many countries on the Pacific Rim, in Europe, and in Africa.

In the U.S., that ratio has dropped since the nearly 100% mark in 2008 at the start of the Great Recession, according to International Monetary Fund data collected by the Federal Reserve Bank of St. Louis. As of the third quarter of 2019 it was at 76%. Expect it to take a screaming leap over the barricades.

Will creditors extend terms, say they understand, and try to work with the debtors? Oh, perhaps a handful might for a month or two. But when the squeeze comes—and it will—help may be nowhere in sight. The financial services industry is rarely known for its humane nature.

Corporate debt is also on shaky grounds, according to Reuters. There isn’t enough paper and printing ink for the federal government to satisfy the line, already stretching into the horizon, of executives who seek bailouts. Many companies will never receive them and, big, medium, and small, will sink under the weight of what they owe. With them will go millions of jobs, leaving more and more and more people unable to meet their obligations.

Those on the bottom and middle rungs of the economy are unready for the level of disaster that may face the world. And the ones at the top who think they’ll be insulated? Enforced misery becomes a dangerous tinder at explosive times.

Accepting Credit Cards: Why It’s Worth It

Are The Houston Rockets Considering Trading Away Russell...

With A New PBS Documentary And A Third...

Tips, Tricks, And Hints For Getting The Most...