Breaking
Think Small: Timely Picks To Capture The Reawakening...
Patient Gets Covid-19 Swab Lodged In Her Lung...
Nine Signs You’re Not Being Effective During Your...
Chromebooks Can Now Run Windows 10 – Find...
Will Biden’s Tax/Benefit Plans Help/Hurt You And The...
This Fashion Brand Turned A Stripe Into A...
Shots In The Dark: Why Access To A...
What Building Wealth Really Takes In Business
Building A Circular Economy In New York City...
How To Cast Your Vote Against Election Scams
New Science On Stress: Feeling Your Feelings Works...
Why Now Is The Right Time To Acquire...
7 Obstacles That Prevent People From Starting Businesses...
Booking Holdings Falls; Likely To Remain A Risky...
Apple iPhone Crushes Samsung Galaxy In Important New...
Shape And Hold: How A British Entrepreneur Took...
Home Business 30 For 30: LSU’s Justin Jefferson Would Be A Steal For The Green Bay Packers At No. 30
Business 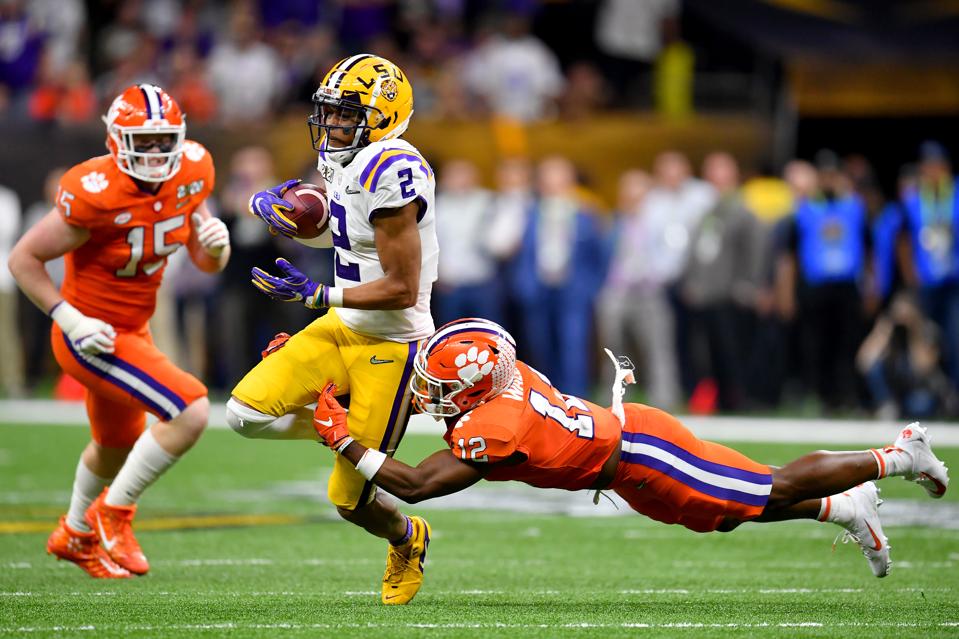 Former LSU wide receiver Justin Jefferson had a huge season and helped lead the Tigers to the … [+] national championship.

Note: The NFL Draft begins April 23 and the Green Bay Packers have the 30th pick in the first round. Between now and then, I’ll examine 30 players the Packers could select, starting with LSU wide receiver Justin Jefferson.

Jefferson tied for the FBS lead with 111 receptions in 2019 and was second with 18 touchdown receptions. He finished the year with 1,540 receiving yards and averaged 13.9 yards per catch.

Jefferson had a game for the ages against Oklahoma in the national semifinals, when he caught 14 passes for 226 yards and four touchdowns. He followed that up with nine catches for 106 yards in the Tigers’ win over Clemson in the national championship game.

Justin was the third Jefferson brother to play for LSU, following Jordan (a quarterback) and Ricky (a safety). Justin didn’t have a reception as a freshman, then caught 54 passes for 875 and six TDs as a sophomore, before exploding as a junior then leaving for the NFL.

Jefferson did much of his damage from the slot in 2019, where he was virtually impossible to defend. He remains a work-in-progress on the outside, though.

Jefferson’s catch radius is outstanding and he makes the highlight-reel catch look routine. Jefferson has ideal size, ran extremely well at the NFL Combine and is a willing blocker.

On the flip side, Jefferson must get stronger and many teams worry about his ability to defeat press coverage. His ability to separate outside is just so-so and his route running needs work.

Green Bay’s No. 1 need is for another high-level pass catcher to pair with Pro Bowl wideout Davante Adams.

Adams had 83 receptions in 2019, despite missing four games with a turf toe injury. Still, Adams had more than twice as many catches as Green Bay’s next wide receiver (Allen Lazard with 35).

The rest of the group — Jake Kumerow, Marquez Valdes-Scantling, Equanimeous St. Brown — leaves much to be desired.

“I think in today’s day and age where these guys were starting 7-on-7, it’s almost like AAU basketball,” Packers general manager Brian Gutekunst said of the wide receiver group. “The receivers are so much more advanced in terms of their fundamentals coming into college and the league than maybe they have been in the past. It’s really just the NFL offense that will take time. So I think there’s some guys sitting here today that I think will have a chance to make a pretty immediate impact, and I’m excited about that.”

Jefferson, on what separates him from other receivers in this draft: “Just my ability to get in and out of routes, I’m very versatile. I can do slot and outside. Just being able to play different positions on the field.”

Former LSU quarterback Joe Burrow on Jefferson: “He has a great feel of one, the offense, two, how to run the individual routes in the offense and then three, the defense that’s being played. So many times when we have a man-route called and he feels zone and just sits in the zone and I just plug it on him. He’s a great player and I’m lucky to have him.”