Breaking
How To Get Your Startup Business Off The...
How To Create A COVID Safe Construction Site
How to Make a Good First Impression at...
Why Now Is A Good Time To Start...
Here’s Why Texas Instruments’ Stock Growing Almost 2x...
LinkedIn’s 50 Best Startups To Work For In...
3 Marketing Mistakes Holding You Back From Hitting...
Is The Matter In Our Universe Fundamentally Stable...
Majority Support Covid-19 Price Controls Says New Brookings...
Reimagined Pan-Mass Challenge Approaches $41M 2020 Fundraising Goal
Is Bitcoin Poised To Bounce Back After Its...
These ‘Temporary’ COVID-19 Changes Will Become Permanent
How Will Our Mental Health Be Affected By...
Selling A Business During A Pandemic: When Talented...
Top 10 Digital Transformation Trends For 2021
Two Veteran Entrepreneurs Aspire To Clean Up America’s...
PPP Forgiveness Applications Are Opening Up. Should You...
Best Domain Registrar
Free Tech For Black Founders Initiative Saves Startup...
Home Technology 30 Million People Face Flood Risk From Isaias – Hurricane Or Not
Technology

30 Million People Face Flood Risk From Isaias – Hurricane Or Not

I often get frustrated while monitoring social media messaging for events like Tropical Storm Isaias. This frustration is probably derived from the wide range of people that I follow on social media such as degreed meteorologists, weather enthusiasts, professors, journalists, and so forth. People view these storms from different lenses of interest. As we have watched Isaias creep along the Florida coast, there has been constant chatter about whether its status: tropical storm or hurricane. That chatter continues Monday morning. In this particularly case, it really doesn’t matter. If you live along the eastern coast of the United States (and inland), you should be more focused on potential impacts of Isaias not its category. 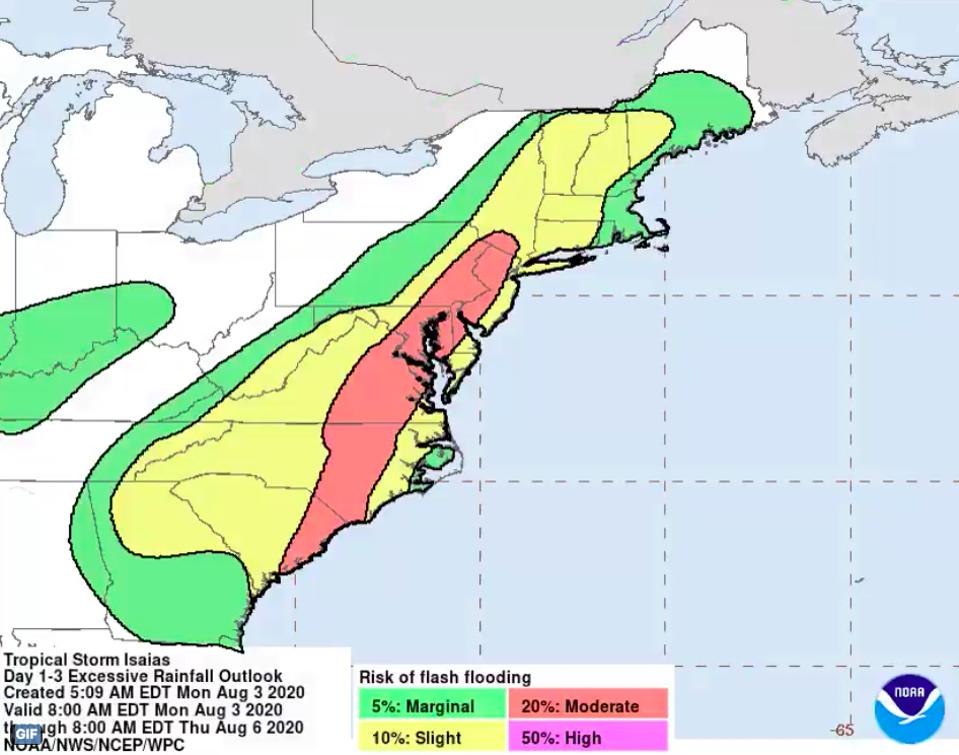 Flood risk potential from Tropical Storm Isaias over the next 1 to 3 days.

My dad lives in the Spacecoast region of Florida. When storms approach, he often calls me for information since I am a meteorologist and director of the University of Georgia Atmospheric Sciences program. This one was no different. When he called Friday, I told him to expect minimal impacts from Isaias irrespective of whether it was a hurricane or a tropical storm. Hurricane Isaias struggled with wind shear as it moved through the Bahamas, and its circulation became decoupled. The National Hurricane Center “downgraded” the storm because of the “weakening” trend at that time. Of course this is technically what was supposed to happen from a meteorological perspective, but let’s talk about messaging. 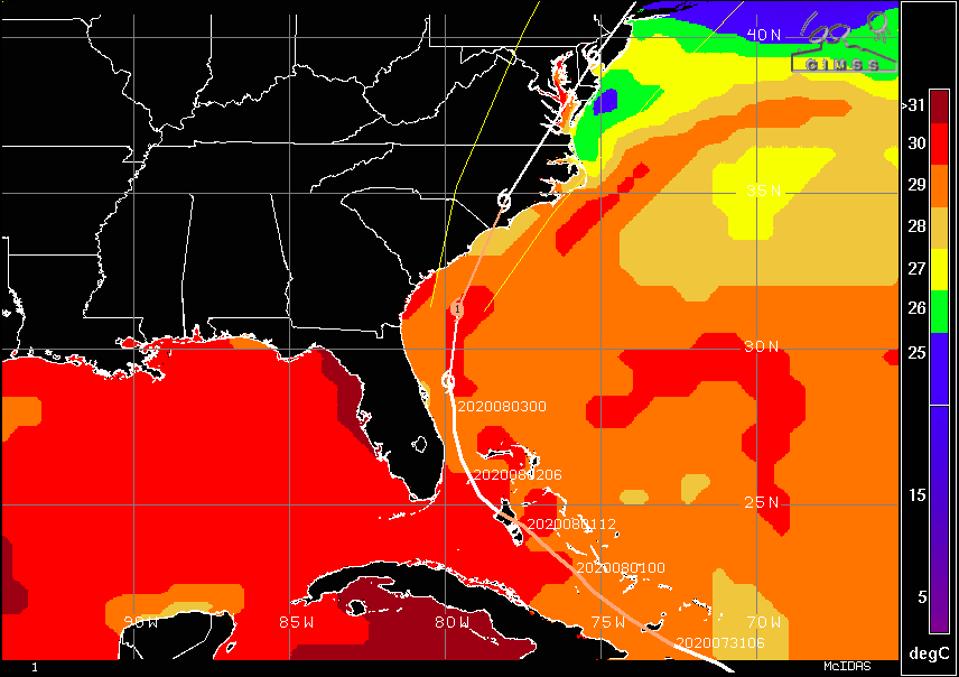 The history and projected path of Isaias.

I placed the words “downgraded” and “weakened” in quotations because they can often be psychological triggers for people. A recently published study in the International Journal of Mass Emergencies and Disasters explored risk communications associated with Superstorm Sandy. They found that certain messaging carried different assumptions about perceived risks (hurricane versus mid-latitude cyclone). In my own circle of social media friends and family, I started seeing social media posts of relief from people living along the East Coast when even though from my perspective, the expected impacts from Isaias were about the same. I recall cringing when some people let their guards down in the Carolinas for Hurricane Florence (2018) after it was “downgraded” from a Category 4 to a Category 1 storm even though flooding because of its lack of movement was always the primary threat. Hurricane Harvey (2017) made landfall as a major storm, but it is probably historic because of damage it caused as a torrential flood producer after it was “downgraded.” Our messaging culture is strongly rooted in the wind-based Saffir-Simpson scale, however, colleagues and I recently published a new metric in the Bulletin of the American Meteorological Society that recommends messaging based on extreme rainfall potential. 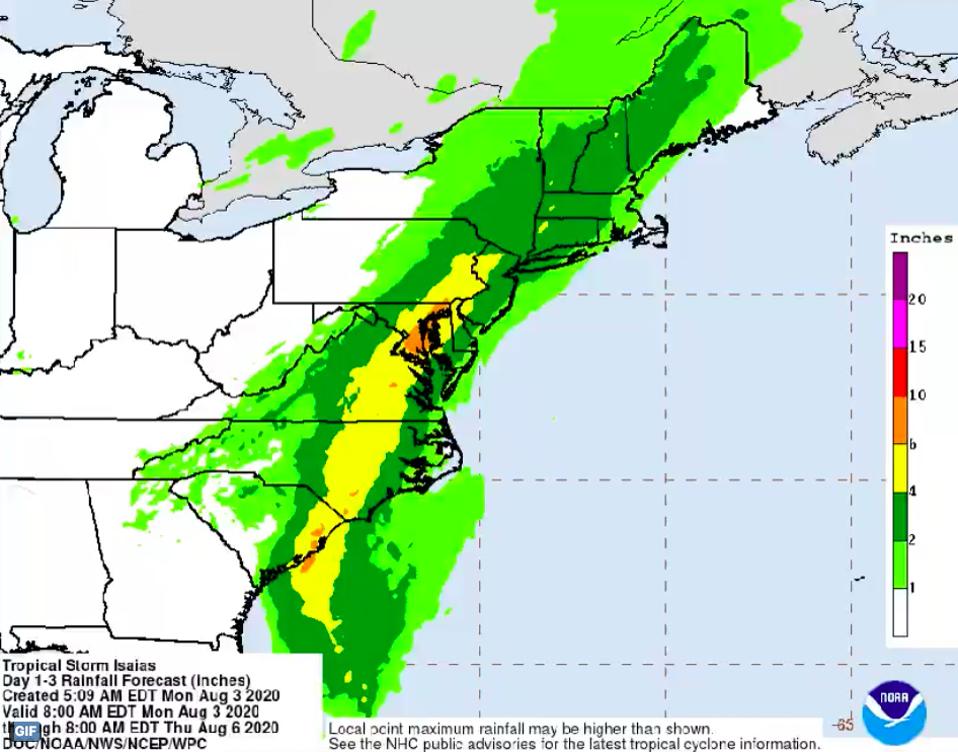 As of Monday morning, the National Hurricane Center’s official forecast still calls for Isaias to reach hurricane strength because it will move into a more favorable wind shear environment. This fact certainly suggests that people in the coastal Carolina region should be alert for storm surge, damaging winds, and tornadoes. Whether it ultimately becomes a hurricane or not, I think Weather.com senior digital meteorologist Jonathan Erdman’s Tweet sums up my thinking, “Time for the annual friendly reminder from meteorologists….There’s little difference between a 75 mph #hurricane and 70 mph #tropical storm.”

Over the next couple of days, there is a very significant rainfall threat up the I-95 corridor of the U.S. East Coast, one of the most populated regions of the U.S. Meteorologist Alex Lamers tweeted, “About 30 million people in the Moderate Risk areas over the next two days” from flooding.” The graphic above projects 6 to 10 inches of rainfall for areas around Washington D.C, Baltimore, and Philadelphia, and other regions within the 4-6 inches range. This is a list of what I am telling my friends or family in those regions:

While us “weather geeks” will obsess over whether it becomes a hurricane or not in the next few hours, if you live in the eastern U.S., you should be asking a different question. How will I be impacted?

5 Pivots Ecommerce Marketers Are Making Due To COVID