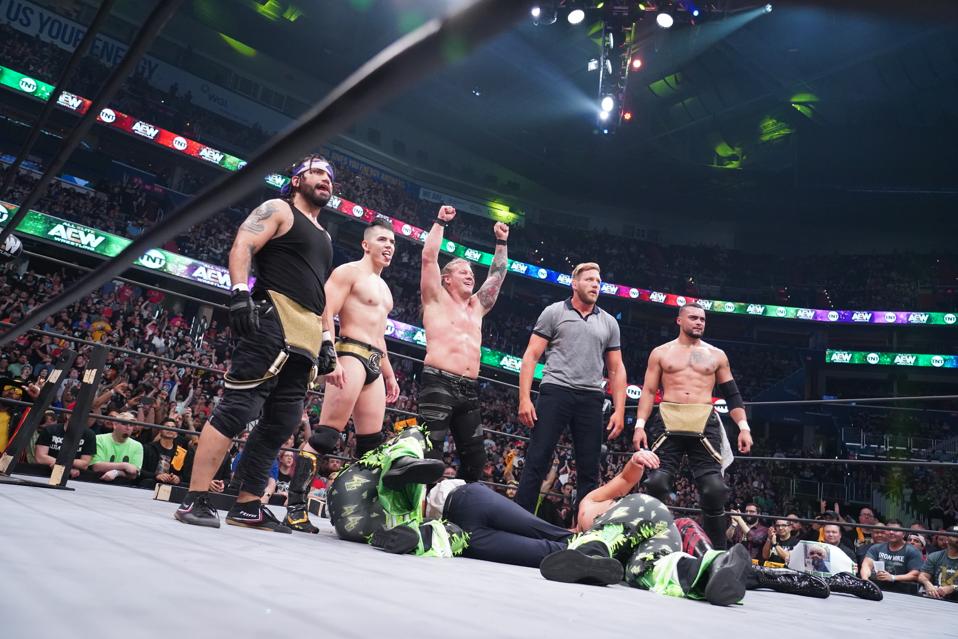 AEW needs to learn its lesson from the plethora of past mistakes made by WWE.

All Elite Wrestling is the new popular kid in class, and so far, the upstart billionaire-funded promotion has been largely outperforming its biggest competition, NXT.

Nearly two months into AEW’s run on TNT, AEW Dynamite has strung together an impressive streak of quality episodes in route to topping NXT in the viewership department all but one week. But AEW hasn’t been without its fair share of faults or disappointments, either. While it’s TV ratings have typically better than those of NXT, AEW’s TV audience has shrunk considerably since its debut episode on October 2, which amassed more than 1.4 million viewers. That audience has since settled in well below one million, and though AEW is still generating solid viewership for being a new wrestling promotion with its first national TV show, that does demonstrate that the company will experience its fair share of growing pains early on.

The key, of course, is whether or not AEW–which has a talented roster, plenty of funding and a solid amount of exposure–can minimize its weaknesses and overcome those growing pains on its way to putting out a quality TV product each and every week. While there has been plenty of good from AEW thus far, like a number of quality matches and strong crowd reaction, a lot of that stems from AEW being the fresh, “cool” WWE alternative, and once that wears off, AEW’s success, or lack thereof, will boil down to its ability to consistently create compelling TV.

One way to do that? Look to WWE as a good example regarding what to do and what not to do in order to grow its audience.

Ensure That There Is Strong Character Development 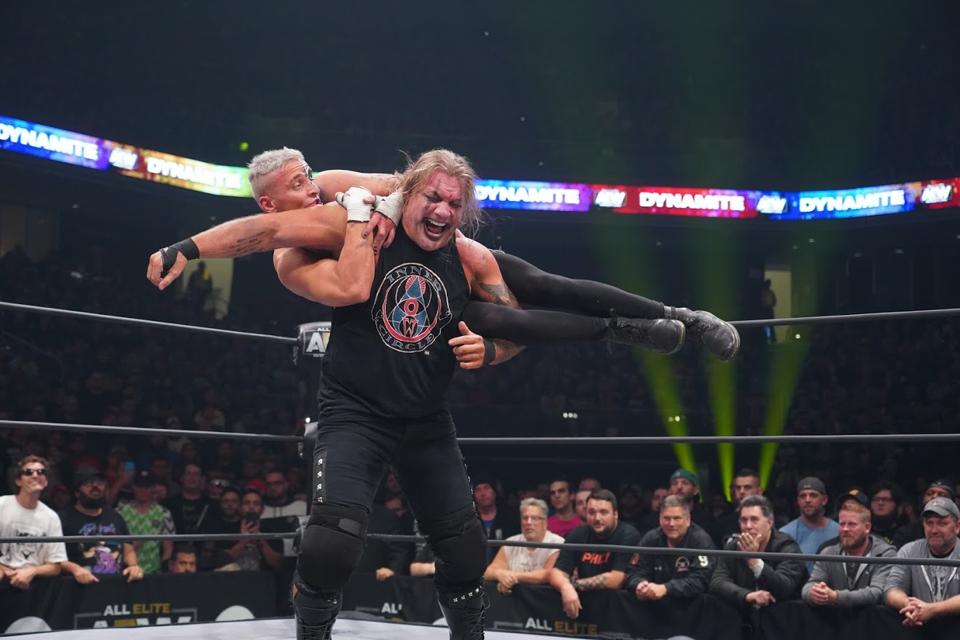 AEW has plenty of talented young stars, like Darby Allin, who need their characters to be developed.

One of the most obvious shortcomings of AEW Dynamite is its lack of character development for the vast majority of the roster, an issue that has plagued WWE in recent years as many WWE stars have fit the cookie-cutter mold of something that’s produced by the WWE machine.

AEW has a lot of potentially unique and innovative characters–like Jungle Boy, Darby Allin and Luchasaurus, just to name a few–but there has been relatively little time and effort put into establishing solid backgrounds for those characters outside of what they do in the ring and a few video packages here and there. Where WWE has failed so much this decade is producing truly riveting characters outside of acts like Bray Wyatt and Daniel Bryan who had discernible gimmicks that were established and developed. AEW is definitely falling short in that regard as the vast majority of its roster is portrayed simply as pro wrestlers without much backstory, which, in turn, results in relatively little incentive for fans to cheer for or boo them in the long haul once the newness of the promotion wears off.

There are many ways AEW can make a more concerted effort to familiarize casual fans with its stars. The announce team must do a better job of providing background information on those characters, AEW’s producers must give more mic time to those who would benefit from it, and AEW needs to find a way to incorporate more backstage segments or video packages that result in true character development for its roster members.

While AEW has done a solid job of that with many of its top acts, it can’t forget about the rest of its roster, and AEW can’t assume that everyone tuning in knows everything about its mid and lower card performers or that everyone watches AEW Dark.

Don’t Sign Too Much Talent Only To Waste Them 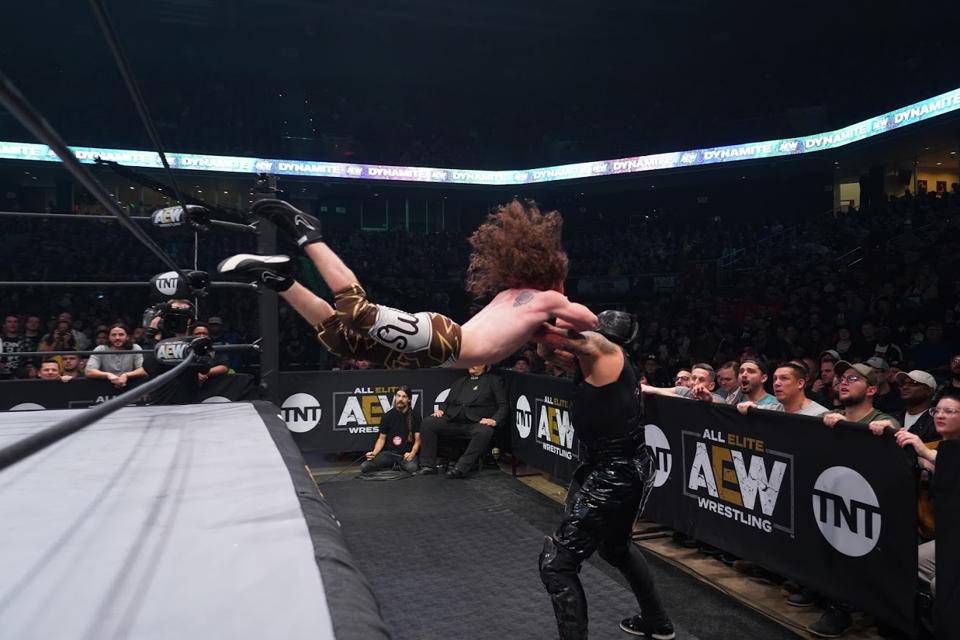 AEW must ensure it doesn’t stockpile more talent than it knows what to do with.

WWE has been plagued by superstar morale problems throughout 2019, and the low spirits of its roster can all be traced back to one thing: The fact that WWE has way too much talent under contract.

The reason a boatload of WWE stars, including but certainly not limited to The Revival and Harper, have been linked to potential WWE exits is almost exactly the same reason why Chris Jericho and Jon Moxley are currently in AEW. That is, many superstars grow frustrated with WWE’s creative process at least in part because the company has more talent under contract than it could ever possibly utilize on a consistent basis. That results in a combination of factors that negatively affect WWE, including low morale, disgruntled superstars and lackluster storytelling, all things that AEW wants to avoid at all costs, especially in its early stages.

AEW only has a two-hour weekly show to produce, and though that might sound like a lot, you’re already starting to see that many AEW stars aren’t on TV on a weekly basis while some–like Jurassic Express–have gone several weeks at a time without appearing on the show at all. On one hand, that might make it exciting when those stars actually do appear on Dynamite. On the other hand, it very well could result in the same problem that has negatively impacted WWE throughout much of this decade, which is a lack of TV time leading to superstar dissatisfaction, potential backstage behavioral issues and multiple superstars wanting out of WWE.

Yeah, it’s still early for AEW, but that’s certainly something that Cody Rhodes and co. will want to think about when booking moving forward: Don’t sign more talent than you need only for them to sit and do nothing. The good news? Jericho says AEW isn’t hiring more talent right now. Smart move. 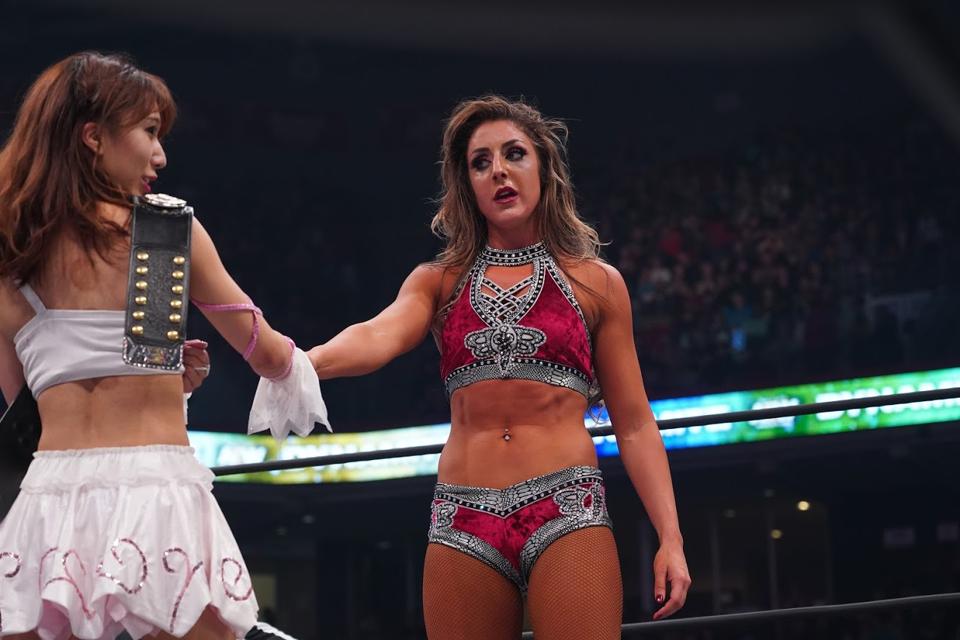 AEW’s women’s division needs to be more than a one-woman show.

Even after Becky Lynch, Charlotte Flair and Ronda Rousey main evented WrestleMania 35 earlier this year, one of the most common complaints about WWE’s women’s division is the way it’s often cast aside for the sake of the rest of the roster. One need not look any further than the so-called “build” to last year’s Evolution, when the first-ever all women’s pay-per-view was largely overlooked due to WWE’s focus on Crown Jewel and Survivor Series. That’s one of many reasons why WWE fans have been so down on the product for so long. Every time it looks like the women’s division is getting a renewed push, like when WWE created the women’s tag team titles, WWE takes another step backward by failing to put much effort into its booking.

AEW’s women’s division doesn’t have anywhere near the talent that WWE’s does, but it does have some promising stars, like Riho, Baker, and Bea Priestly, who could become household names if the booking is consistent. The problem now is that most of those names are relatively unknown among casual wrestling fans, and the only two female stars not named Brandi Rhodes who are getting something remotely resembling consistent TV exposure are Baker and Riho. Even that’s a stretch as the women’s division has largely gotten just one or two matches or segments per show while character development and match quality have been sorely lacking.

AEW is facing the tough task of building up its women’s division, and though it won’t be easy, it’s a necessary move if the company wants to avoid the criticism that WWE has gotten for much of its existence due to the way it books women’s wrestling.

Find The Right Mix Of Promos And Wrestling 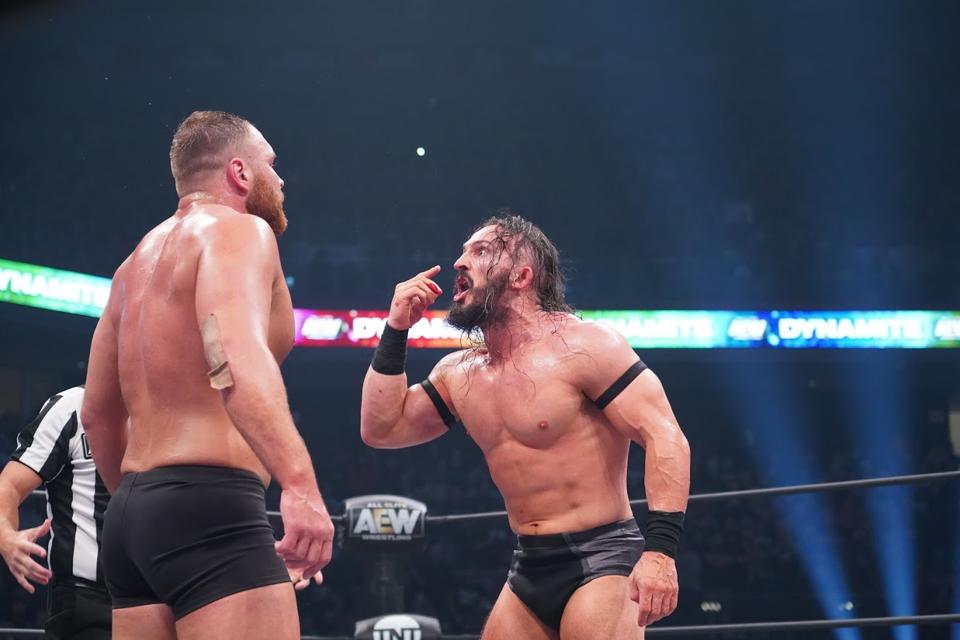 Jon Moxley and the rest of AEW’s stars need a chance to show what they can do on the mic.

Cody Rhodes has made it clear that AEW won’t be doing long, drawn-out promos, that it won’t “cater to casual fans” and that its promos won’t be scripted.

Of course, it’s a great idea for AEW to avoid unnecessarily long promos just as it’s wise to let its stars cut their own promos rather than reading from a script. But AEW needs to find a healthy balance between promos and wrestling because “catering” to casual fans is one thing but ignoring them altogether is another. While AEW is certainly targeted toward a more niche audience in comparison to WWE, we’ve seen WWE really struggle with its ability to find the right mix of promos and wrestling. Typically, WWE relies far too much on promos and backstage segments to carry its product, and that’s resulted in plenty of fan complaints about WWE focusing too much on the “entertainment” and not enough on the “sports.”

AEW is clearly targeted toward fans who are more interested in the “sports” aspect of pro wrestling, but at least so far on Dynamite, it seems that AEW is simply jumping from one match to another without much room for fans to digest what’s going on or to grow attached to AEW’s performers due to anything but their wrestling ability. While AEW shouldn’t use the typical promo-heavy or segment-heavy style that has become a staple of WWE, AEW will need to incorporate some more promos, backstage segments and video packages that allow its characters to be established and its superstars to get over.

Because even though the crowd is consistently hot for AEW matches, those fans would be even hotter if they were more emotionally invested in the characters behind those in-ring performers. 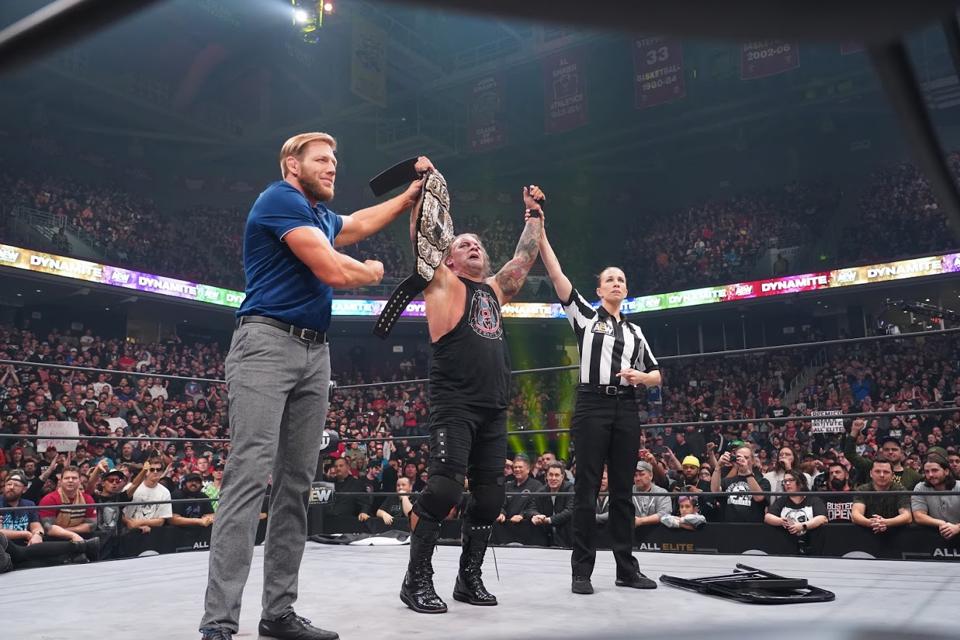 Jake Hager and Chris Jericho are two of many former WWE stars who have a high-profile role in AEW.

Let’s state the obvious, shall we? AEW has a lot of former WWE talents currently working for the company.

That list includes Chris Jericho, Jon Moxley, Jake Hager, PAC, Cody Rhodes, Dustin Rhodes, Shawn Spears and Jim Ross, among others. One of the things that nearly ruined Impact Wrestling at one point was the fact that the company, once chock full of homegrown talent, grew to be viewed as a place for WWE castoffs. AEW certainly isn’t that just yet, but if it’s not careful, it could become dangerously close to having so much former WWE talent under contract that it develops a reputation as a place where WWE “rejects” go to try to remain relevant. That’s certainly not a fair assessment at this stage, but if perception is reality, any perception that AEW is WWE-lite will do more harm than good for the company.

That’s why it’s so imperative that AEW build up its own homegrown superstars, like Baker, Jungle Boy and Adam Page. The success or failures of AEW will depend heavily upon the company being able to build up its own identity, and that’s something that simply can’t happen if the majority of the card features stars who were in WWE at one point or another. Right now, utilizing former WWE names to get more exposure is fine for AEW, but the company needs to tread lightly.

Because the day that AEW pushes Hager, Jericho, Rhodes and Moxley at the expense of Page, Baker and others is the same day that fans will begin to turn on AEW.

Meet The Corporate VCs (CVC) — The Future Of Startup Funding

Best Restaurants In The World: One French, One American, Two Japanese At The Top Of ‘La Liste’ 2020