Home Technology 50 Million People May Gather For The ‘Greater American Eclipse,’ The Most Watched In History
Technology

50 Million People May Gather For The ‘Greater American Eclipse,’ The Most Watched In History 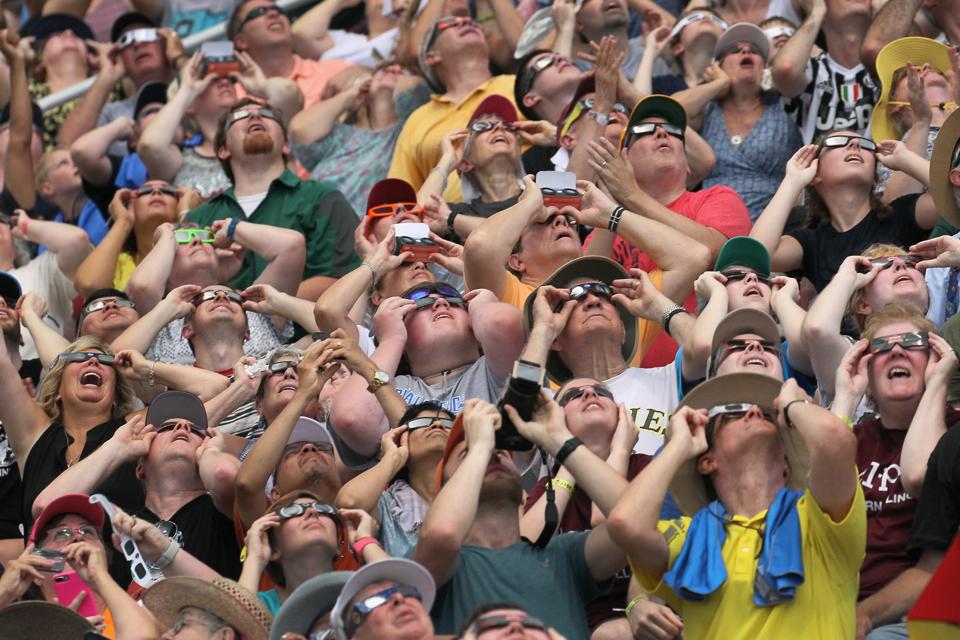 People watch the solar eclipse at Saluki Stadium on the campus of Southern Illinois University on … [+] August 21, 2017 in Carbondale, Illinois. (Photo by Scott Olson/Getty Images)

On Monday, April 8, 2024 a rare total solar eclipse lasting a maximum of 4 minutes 28 seconds will be visible from parts of Mexico, the US and Canada as the moon’s central shadow sweeps across the continent in 139 magical minutes.

“What is most exciting about the April 8, 2024 total solar eclipse is that the total phase of eclipse is nearly twice as long as the 2017 eclipse,” said Michael Zeiler, an eclipse cartographer who launched GreatAmericanEclipse.com initially in anticipation of the 2017 total solar eclipse. “Because it is so much longer, the width of the path of totality is also bigger.”

It’s estimated that 215 million Americans saw the 2017 event, though most only saw a partial solar eclipse—a not-very-interesting sideshow, relatively speaking. Only around 12 million experienced a total solar eclipse from the path of totality.

Viewers must be within the path of totality to see experience the remarkable effects unique to totality; dropping temperatures, gathering darkness, exquisite “diamond rings” around the moon, and a chance to see the tenuous white solar corona—the sun’s outer atmosphere—spilling into space. It’s a hypnotically beautiful and addictive experience.

On April 8, 2024 the 100-mile wide path of totality will, during the 139 minutes it’s over land, plunge into a brief and spellbinding darkness parts of Sinaloa, Durango, and Coahuila in Mexico, and in the US, Texas, Oklahoma, Arkansas, Missouri, Illinois, Kentucky, tiny slivers of Tennessee and Michigan, Indiana, Ohio, Pennsylvania, New York, Vermont, New Hampshire and Maine.

As it moves over Lake Erie and Lake Ontario on the US-Canada border, the shadow will fall on parts of Ontario, Quebec, New Brunswick, Prince Edward Island and Newfoundland. 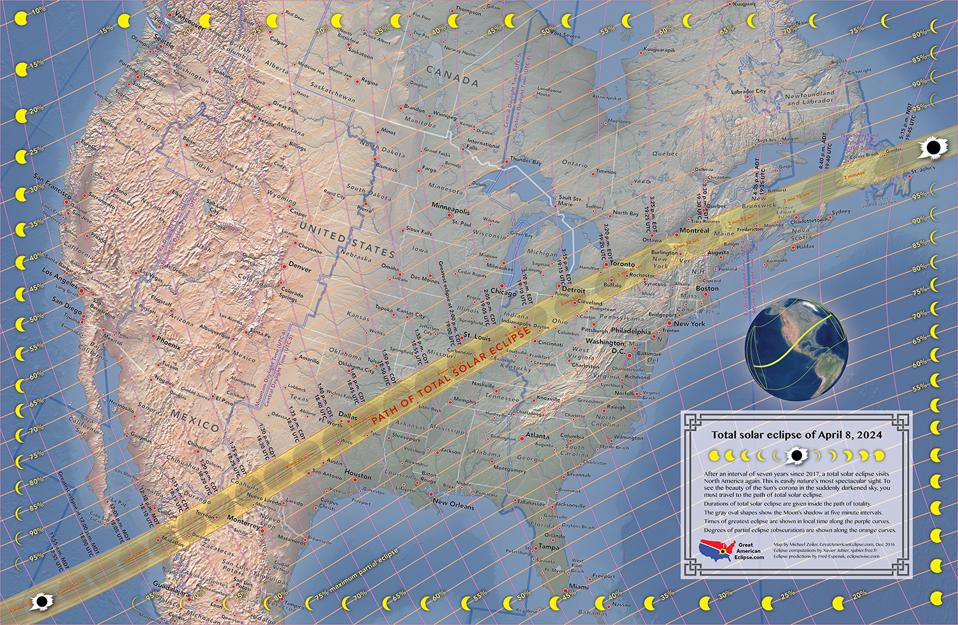 “When you factor in the heightened interest after the 2017 eclipse and the proximity of the eclipse path to the most populated parts of the country, it’s possible that 40 or 50 million Americans will go to see totality.”

That would make it the most watched eclipse in history.

It’s also set to be the longest totality for some time. “Not since July 22, 2009 has a total solar eclipse over four minutes in duration been visible to a major population,” said Zeiler. “There have been several total eclipses since 2009 and before 2024 with a longer duration than four minutes, but only over small islands and remote stretches of ocean.”

For example, the last total solar eclipse on July 2, 2019 peaked at 4 minutes 33 seconds, but only in a remote part of the Pacific Ocean. Although there were some lucky eclipse-chasers aboard a Boeing 787-9 Dreamliner that raced to keep up with the moon’s shadow (and actually experienced a whopping 8 minute totality), the vast majority had around 2 minutes of totality in Chile and Argentina where the path of totality made land.

On April 8, 2020 the majority of the path of totality is over land. 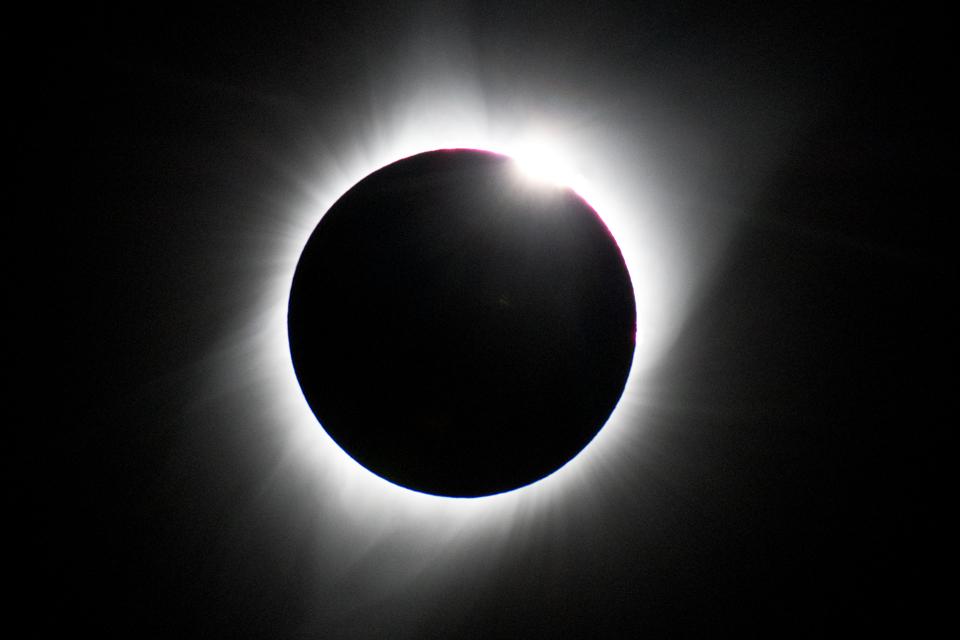 So where to watch it? How about beside a lighthouse in Mazatlán on the Pacific coast of Mexico to see “first dark”? Or atop Enchanted Rock in Texas, at Niagara Falls, or with the puffins in Newfoundland as the eclipse exits North America at Canada’s Atlantic coast? “I’m expecting to be in Texas on April 8, 2024 because of the greatest chance of clear skies and longest duration of totality in the USA,” said Zeiler, who thinks San Antonio or Austin will be great base areas.

Eclipse-chasers are, in practice, obsessed with weather, and on E-Day can usually be found with solar eclipse glasses in one hand and car keys in the other. “I’ll be keeping an eagle eye on the weather forecast a few days before,” said Zeiler. “If necessary, I’ll be prepared to dash towards Eagle Pass on the border with Mexico or towards Dallas.”

MORE FROM FORBESIt’s Exactly Five Years Until The Next Solar Eclipse In North America. Here Are 10 Places To See ItBy Jamie Carter

“After a 38-year total eclipse drought, the United States has the great luck to have twin totalities in 2017 and 2024,” said Zeiler, but they’re not all that North America has on its celestial schedule. There’s also an annular solar “ring of fire” eclipse visible in North America on October 14, 2023. “They’re followed by a total solar eclipses in 2033 in Alaska, 2044 in Montana, and an even longer six-minute total eclipse crossing the nation in 2045,” said Zeiler.

“So 2045 would absolutely be ranked the “Greatest American Eclipse”—you’ll be able to be in the Moon’s shadow in Disney World or Kennedy Space Center. Tough choice!”

MORE FROM FORBESWhy You Need To Stay Alive Until 2045: North Americans Are Living In A Golden Age Of EclipsesBy Jamie Carter

That one’s for the long-term planners. However, with just four years to go it’s time to start planning for 2024’s “Greater American Eclipse.”

Disclaimer: I am the editor of WhenIsTheNextEclipse.com and author of “The Complete Guide To The Great North American Eclipse of April 8, 2024.”

Report: UFC 249 To Take Place At Tachi Palace In California