Breaking
ESBC Major Updates: Tons Of Heavyweight Greats Added...
How to Run Nonprofit Marketing Ads
Entrepreneurs Are Bringing Transparency To Home Buying And...
Best Incentive To Get Vaccinated: Money, Messaging, Or...
Page Level Query Analysis at Scale with Google...
How A CIO Can Align IT With Business...
Blogger of the Month: Jo, Girl Eats World
6 Things Women In Business Know That Men...
How to Use First-Party Data for Ad Personalization
Pressing Reset—Putting A Fallen Unicorn Back On Its...
How We Went Viral: Promoting Content with Influencers,...
Blame Olympic Record Price Tag For Return To...
Apple iOS 14.5 Release: Should You Upgrade?
How to Come up with Podcast Topics and...
Why Gaming Gear Company Razer Launched A $50...
Technical SEO Implementations to Increase the Impact of...
Home Business 6 Terrifying Films To Stream Instead Of ‘A Quiet Place Part II’
Business 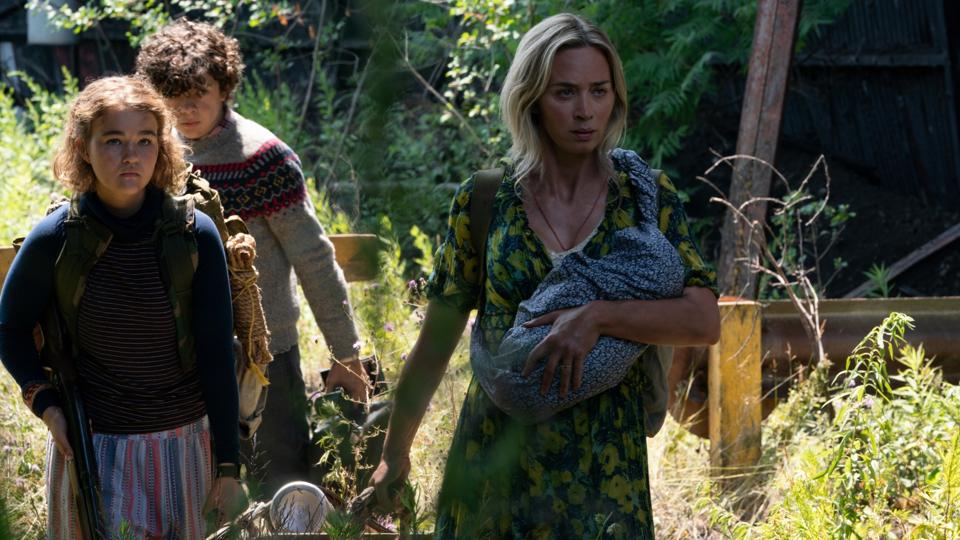 A Sandra Bullock Netflix original, an M. Night Shyamalan flick and a found-footage masterpiece are just some of this week’s best replacements for this week’s big theatrical release that won’t actually be opening in theaters anytime soon.

With A Quiet Place Part II pulled from the theatrical release schedule indefinitely, and presuming you’re not going to catch up on Universal’s three most recent theatrical releases (The Hunt, Emma and The Invisible Man) which have just been released on VOD as “rent for $20” titles or Disney’s Onward (available to buy this morning), the question becomes a suitable replacement for the John Krasinksi-directed and Emily Blunt-starring horror sequel. So, as I’m going to have to start doing every week for the near future, allow me to suggest a handful of available to rent (or stream) movies that are somewhat comparable to the movie that isn’t opening today at a theater near you.

Well, yeah, obviously. The blockbuster horror flick brought Paramount back from the dead after a two-year slump, opening with a stunning $50 million and legging it out to $188 million in North America (and $338 million worldwide) on a $17 million budget. That’s the biggest original live-action release, sans inflation, in raw domestic grosses since Chris Nolan’s Interstellar in late 2014. And if Chris Nolan’s Tenet doesn’t open as scheduled on July 17, that milestone may remain as such. If you were planning on seeing A Quiet Place Part II this weekend (and it was tracking for an over/under $60 million domestic launch), you don’t need me to explain why it’s worth a gander.

The high-concept chiller isn’t just a genuinely terrifying bruised-forearm thriller that offers horrific imagery and concepts within the bounds of a PG-13 rating (how many R-rated movies open with a small child being eaten by a giant monster?). Beyond its gimmick removing what are usually “time out” moments in a conventional horror scenario, the film works because the family is painfully functional. Unlike many family-centric horror movies, including a lot of very good ones, the nuclear unit headed by Krasinski and Blunt would be entirely happy if not for the alien invasion, which offers a different flavor as opposed to the many horror flicks that add genre on top of already established family trauma.

The Haunting in Connecticut (2009/Lionsgate)

As noted last week, this $10 million, PG-13 chiller grossed $77 million worldwide and spawned two (loose and disconnected) direct-to-DVD sequels. It’s a terrific movie, thriving as an emotional melodrama about a family whose young son (Kyle Gallner) is dying of cancer, and the haunted house they purchase to be closer to the necessary hospital. It’s a classic “the family is already going through stuff before the monsters show up” genre offering. Virginia Madsen, Gallner (playing exactly to type) and Martin Donavan are terrific while Elias Koteas offers “reliable character actor” support as a mortally ill priest. It’s a moving story, told well, with enough quality shocks and scares to work as both a horror movie and a drama.

This straight-to-VOD Halloween flick is written and directed by Scott Beck and Bryan Woods. They wrote A Quiet Place before/after John Krasinski came on as director. Krasinski wrote the sequel by himself, and Woods and Beck crafted this Eli Roth-produced chiller. The premise, young adults enter one of those extreme “sign a waiver” haunted houses only to get attacked by very real masked slashers, is the movie in a nutshell. It is a good time, with a few plot turns and creative kills amid sympathetic characters. It’s not dissimilar to Lionsgate’s Hellfest (same premise, but concerning an entire Knotts Scary Farm or Universal Halloween Horror Nights-type attraction), but you’re going to be stuck inside for awhile so you’ve got time for both.

Beyond the online memes and record initial viewership, Susanne Brier’s Bird Box, adapted by Eric Heisserer from Josh Malerman’s 2014 novel, is a perfectly enjoyable star-driven sci-fi horror flick. It has a goofy high-concept (Earth is overrun by aliens who can coerce you to kill yourself if you look at them), strong performances and enough production value in its $13 million budget to remind you that, in a different time, this would have been just another Saturday night at the movies. The cast alone (Sandra Bullock, Trevante Rhodes, John Malkovich, Sarah Paulson, BD Wong, etc.) makes it worth at least a curiosity watch, and the picture works as a solid three-star studio programmer. And it’s better than The Silence.

This Barry Levinson (!) flick is the scariest found-footage horror movie ever made. The under-the-radar Blumhouse flick is a terrifyingly plausible tale of a town caught up in what turns out to be an ecological plague. This one is genuinely bone-chilling, building the tension and  unveiling the level of catastrophe until we merely find ourselves asking just how possible it is (or plausible it might be) that this could actually happen. This was Levinson’s best movie Wag the Dog back in 1997. It was also the scariest American theatrical  horror film since The Mist in 2007.  This is a horror film that almost ennobles the found footage format proud, framing a gruesome horror tale in a painfully mundane fashion and actually making the unthinkable seem sadly plausible.

I’m not going to say that M. Night Shyamalan’s much-mocked supernatural thriller (which earned $164 million on a $60 million budget) is “good.” The Happening is unique unto itself, is rarely boring and has aged well in terms of being a bonkers/original premise delivered with a relatively straight-face (and just a hint of knowing camp). At its core, the Mark Wahlberg/Zooey Deschanel sci-fi chiller is essentially “What if one of our more genuinely talented directors made a big-budget, R-rated Ed Wood movie?” Shyamalan is nothing if not sincere, and while he’s attempting a modern-day version of a 1950’s sci-fi “warning” movie, the film is absolutely invested in its “mother nature is tired of humanity’s bulls**t” premise.

Mark Wahlberg’s star turn as a high school science teacher has taken on a kind of “David Caruso in C.S.I. Miami” afterlife. It’s so damn weird and memorable that it’ll live on well beyond any number of his conventionally “good” performances. Deschanel is playing what feels like a grown-up version of one of Shyamalan’s “was haunted by ghosts or whatever” child characters. The opening act is appropriately terrifying; Shyamalan’s parents are both doctors, and you can see that in the clinical and brutal violence. It has any number of trademark Shyamalan touches of skewed humanity (I love Wahlberg and Deschenel’s conversation about cough syrup), and the notion of mother nature culling the herd feels oddly prescient.

Sad to say, I’ll be back next week for at-home/online substitutions for Walt Disney’s live-action remake of Mulan.